I first learned about the “miles game” from absorbing information on the FlyerTalk forums, then later from reading travel blogs such as One Mile At a Time and View from the Wing. These resources were invaluable to me, and I hope this post can help some others figure out how to book award tickets successfully.

Bloggers love extolling the virtues of using credit card sign-up offers to earn points. Of course, they have a financial incentive in the form of referral revenue. But they’re also correct.

It takes an awful lot of flying to amass the 100,000+ miles needed for a one-way award in first class. Earning a couple of 50,000 mile sign-up bonuses for opening a credit card and putting big-ticket items on the cards is the easiest way to plump up your points balance for “aspirational” award travel on the “good” airlines’ first class (Cathay Pacific, Lufthansa, and Singapore Airlines are among the favorites; Swiss, Thai, ANA, Korean Air, Asiana, and Air France also receive strong reviews. 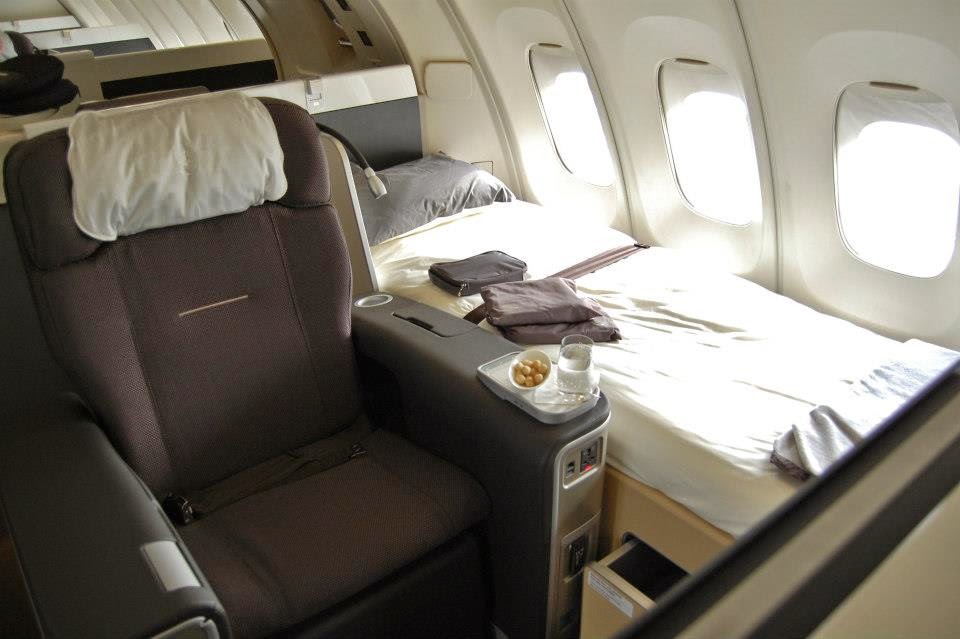 
Accumulating miles is, relatively speaking, the easy part. The hard part is booking the award itself. Award-ticket availability is never a given. Each airline has complex rules about how many flight segments you can book on an award and whether you’re allowed to stop over on your itinerary. Flexibility and diligence in searching for awards both seem like necessary conditions to get a “good” award itinerary. 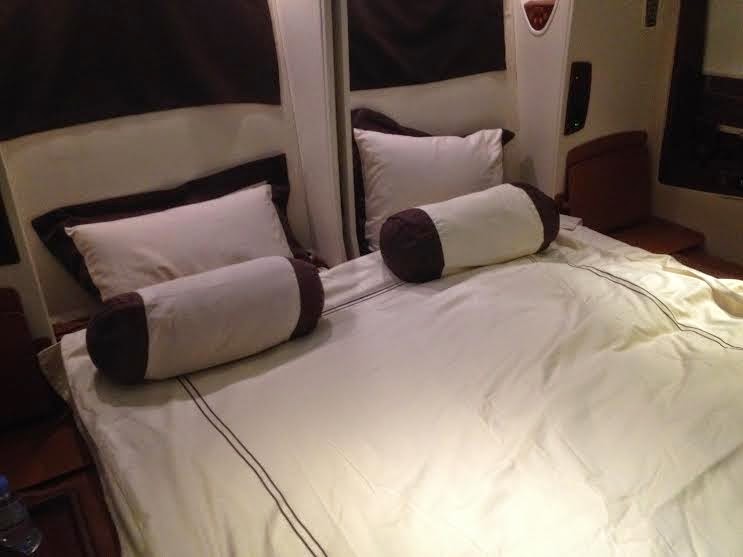 Booking with Singapore Airlines
Singapore Airlines releases no first/Suites-class or business-class awards to partner airlines on its Airbus A380-800 superjumbo or on the Boeing 777-300 ER, which operate almost all of Singapore’s long-haul routes. So to book Suites class on the A380, I had to book the ticket through Singapore’s frequent-flyer program, KrisFlyer. 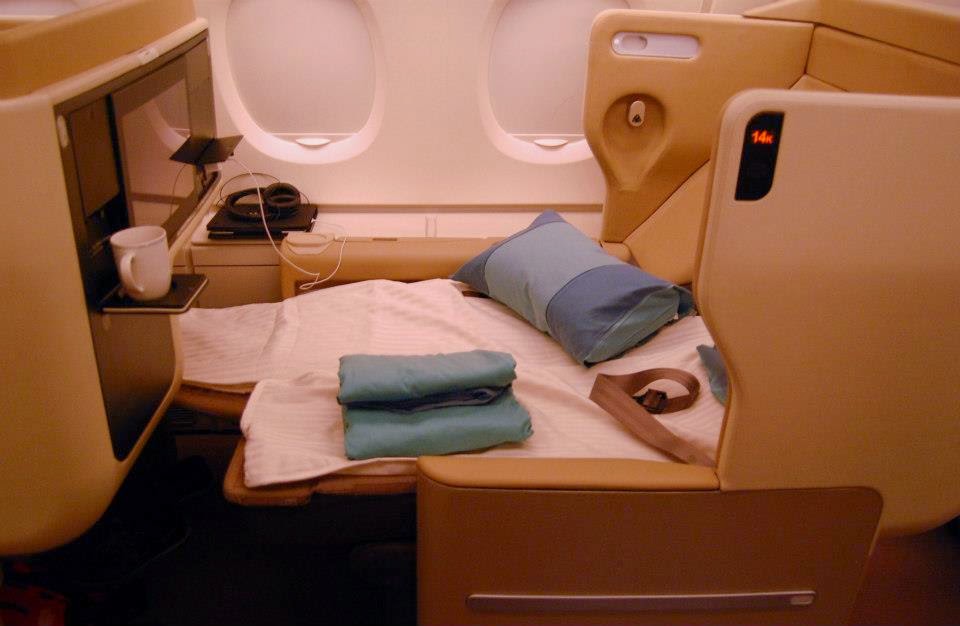 To search for award availability on Singapore Airlines’s website, you need to create a KrisFlyer account (which is free), but you don’t need to have any miles in the account. So I did that and started looking for Suites awards out of the United States. Currently, Singapore operates two US routes with Suites: Los Angeles to Tokyo-Narita and New York-JFK to Frankfurt.


The award cost 106,250 KrisFlyer miles and $525.24 in fees, and would give me a little over 24 hours in Suites class. Chase Sapphire Preferred points transfer at a 1:1 rate to KrisFlyer, and my transfer went through within a couple of hours.

The sticker price for the itinerary would have been $7,855.10, giving an implied valuation of about 6.9 cents per Chase Sapphire Preferred point. (Sort of. I don’t value the flights as highly as ~$8k, but each person’s valuation is subjective.)

Booking with United MileagePlus
Although United’s business- and first-class products are pretty unremarkable, many of their airline partners have fantastic first classes: Lufthansa has a separate flat bed on its 747-400; Asiana has a suite with closing doors on its A380-800, and Thai, Swiss, and ANA also have excellent products. (Although Singapore is technically a United partner, it doesn’t release award tickets to partner airlines. I’ve also never actually seen Swiss first class awards).

United’s generous routing rules allow you to route through Europe on a North America-Asia award, and you can fly a maximum of four flight segments. United’s not-so-generous award chart charges 120,000 miles for a one-way itinerary in first class through partner airlines (and 80,000 if the long-haul segments are on United aircraft).

Lufthansa is a key player if you want to book an itinerary routing through Europe, and they open up their first-class awards to partners about 14-15 days before the flight. But I thought it was too risky to bank on something opening up with them, so I locked in a short-but-sweet award in the meantime:


Even that relatively simple itinerary was the product of a great deal of searching; I also considered itineraries routing through Seoul-Incheon and Los Angeles (Asiana’s A380) or through Bangkok and Tokyo (for Thai’s A380). But schedules and award availability for those itineraries didn’t work out.

For the high miles-price I’m paying, I’d prefer to fly more segments in first class; Narita to San Francisco is a relatively short trans-Pacific flight (a little over nine hours). So like a demented moth drawn to a flame, I’d be back on united.com every day seeing whether there was award availability on Lufthansa for the day I wanted. When routing through Europe, you can’t just plug in your start and end cities; you usually have to search by each individual segment. So I’d have to check Lufthansa’s routes from Seoul, Tokyo, Beijing, and Shanghai to Germany for the Asia-Europe segment, then check the many routes from Germany to North America for the rest of the trip. 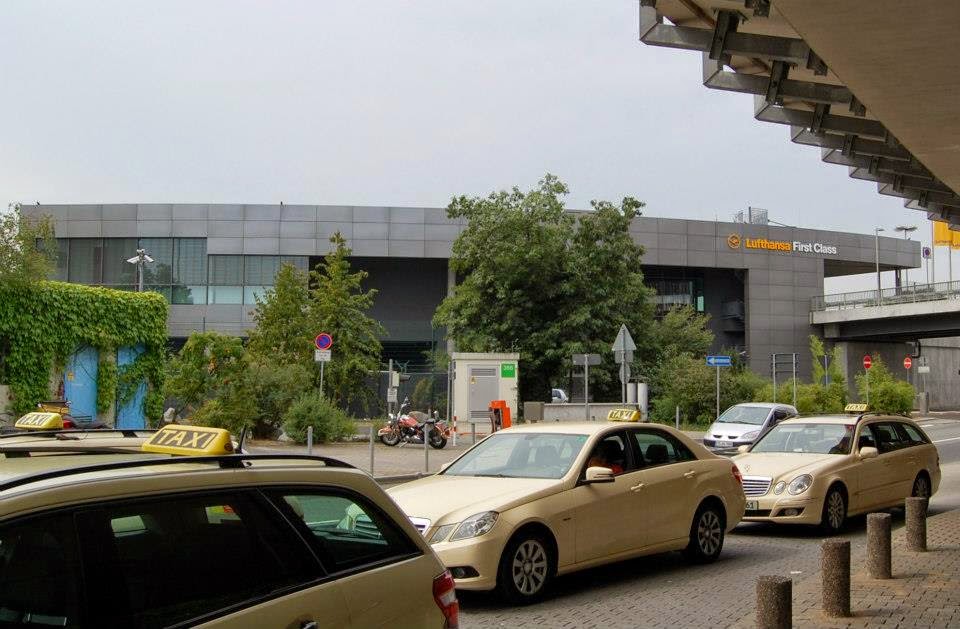 After searching for quite some time, I found an itinerary that worked:


But technological limitations prevent you from being able to book such a complex itinerary online. So I had to call United’s phone line and try to get someone to book it for me. This isn’t easy – there’s a wide range of competence among United’s phone reps.

The first phone rep was hopeless – she had no idea how to book an award itinerary with multiple segments. With these phone reps, I’ve found it’s usually better to politely hang up and call back, hoping for someone different.

The second, third, and fourth phone reps insisted that they were unable to book the Shanghai to Seoul segment. I didn’t believe them; the award showed up on both United.com and the ANA booking tool (a commonly used resource to help book Star Alliance awards). Sometimes bugs in the United.com system will show users “phantom” award availability that doesn’t really exist, but the ANA tool is almost 100% reliable. 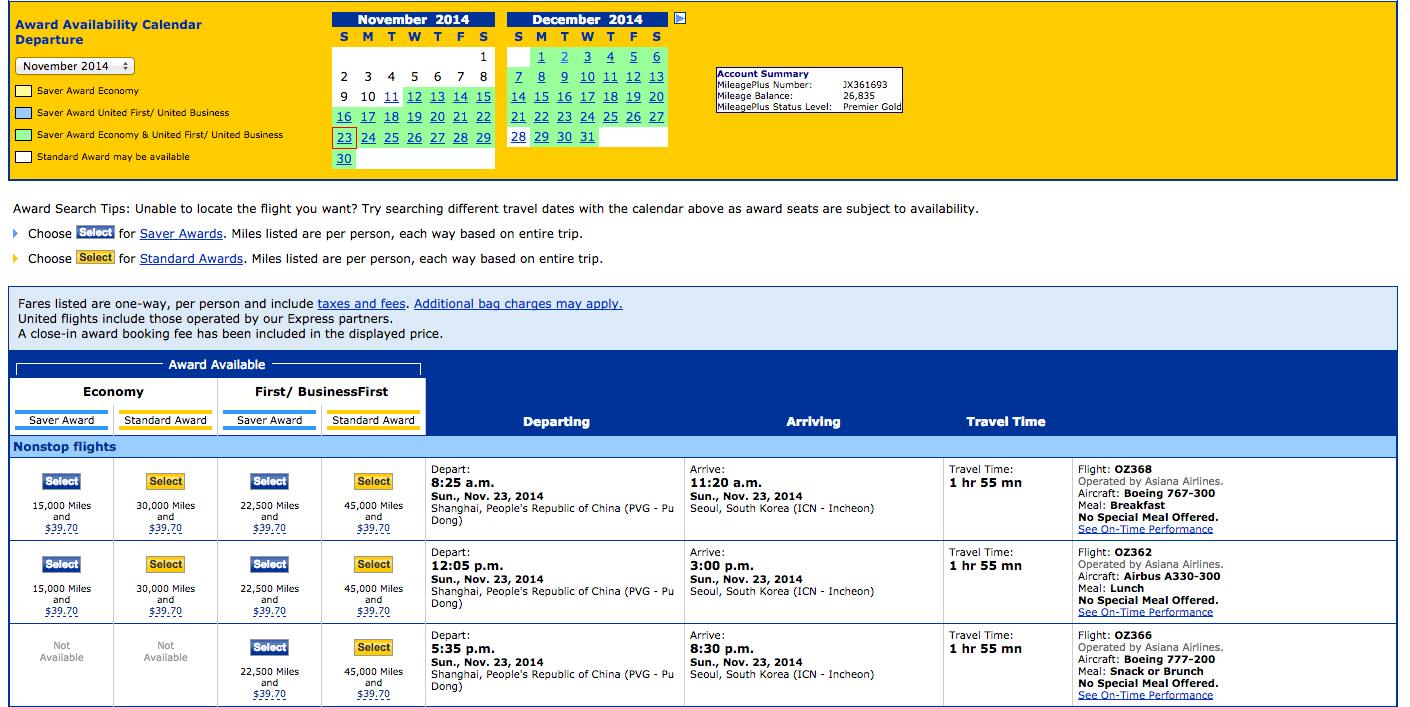 The award availability shows up on United.com

I had no idea what was going on. So I went onto the United site to see if I could book just the Shanghai to Seoul segment myself. When I tried, I got this bizarre error:

But the problem cleared itself up eventually and a very helpful phone agent booked me on the revised itinerary with no problems. It cost a total of 120,000 United MileagePlus miles and $91.70, plus a $25 change fee (the standard cost of doing business when you want to book a Lufthansa itinerary). The Seoul-Frankfurt-Vancouver portion alone in first class retails for $8,873, which gives an implied valuation of 7.3 cents per MileagePlus mile. (Again, it’s not actually worth that much in utility, but it’s still a pretty good deal).

Conclusion
It takes a fair amount of patience and time to book an intercontinental award ticket with multiple segments. Some might think it’s crazy to spend this much time searching for a bizarre 36-hour itinerary when there are non-stop flights from Shanghai to San Francisco that take about 11 hours. But what’s the fun in that?