The world of travel bloggers has canonized several lounges into the stuff of legends, particularly Thai, Lufthansa, Cathay Pacific, and Emirates's first-class lounges in their home airports. Singapore Airlines's flagship lounge is also supposed to be within that elite group.

The first level is the SilverKris lounge - accessible to any Star Alliance Gold-elite members or passengers traveling in business class. 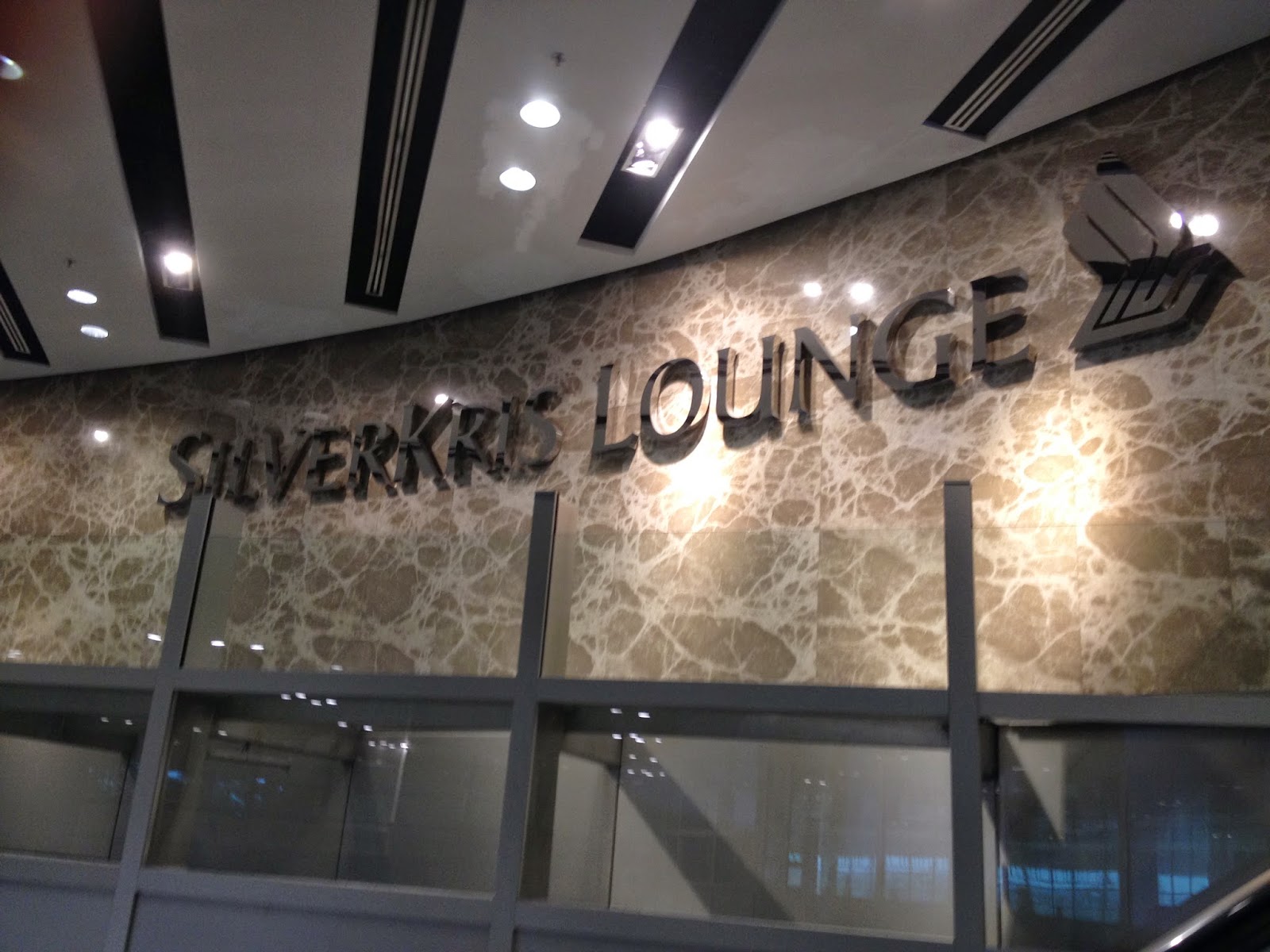 The second level is the First Class Lounge - accessible to Star Alliance passengers in First or Suites Class or Singapore's top-tier elite status (which requires an astounding $250,000 SGD spend in five years - about $200,000 USD). 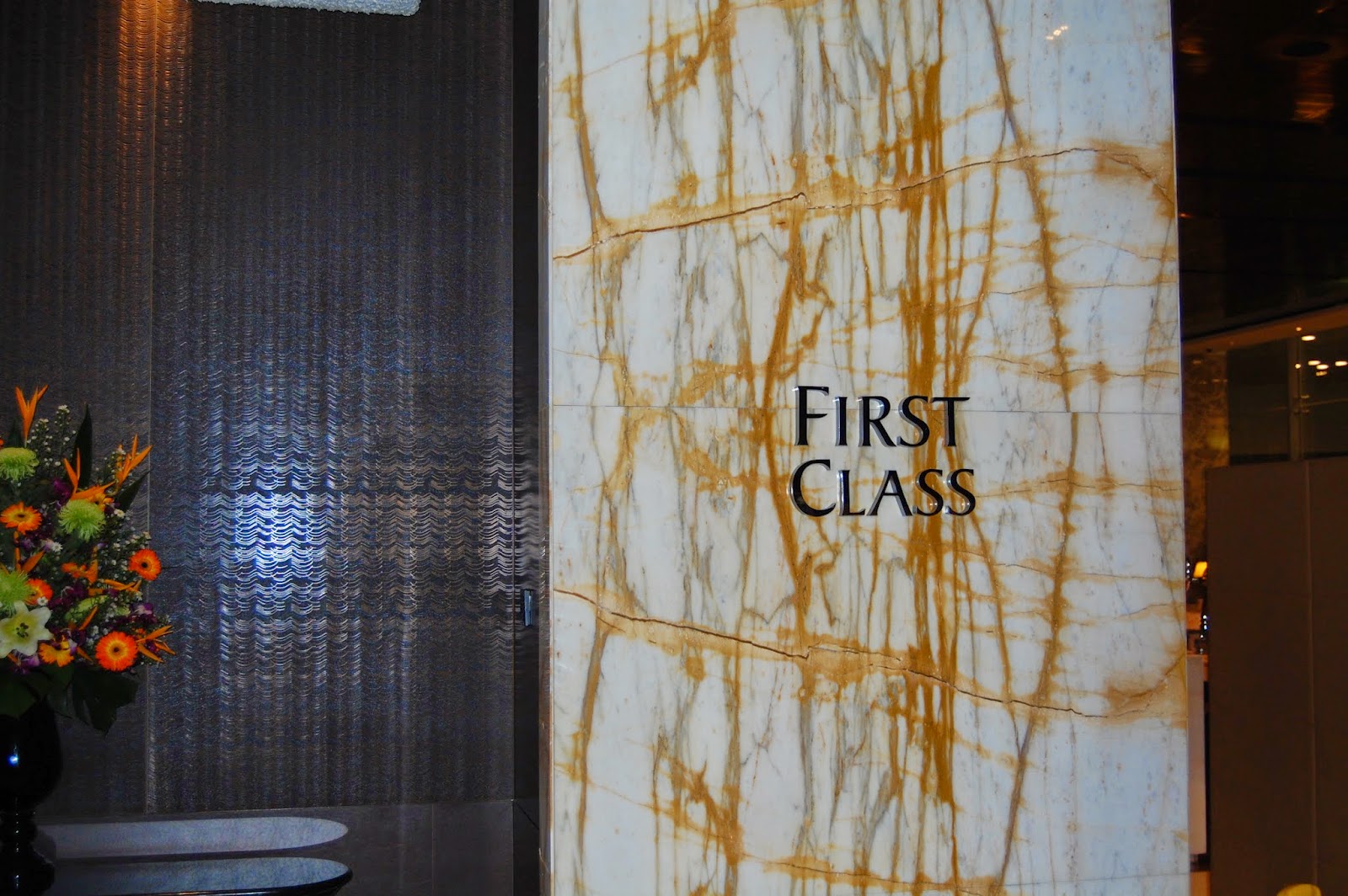 And The Private Room is an inner sanctum within the First Class Lounge, accessible only to Singapore Airlines's passengers traveling in First or Suites Class. 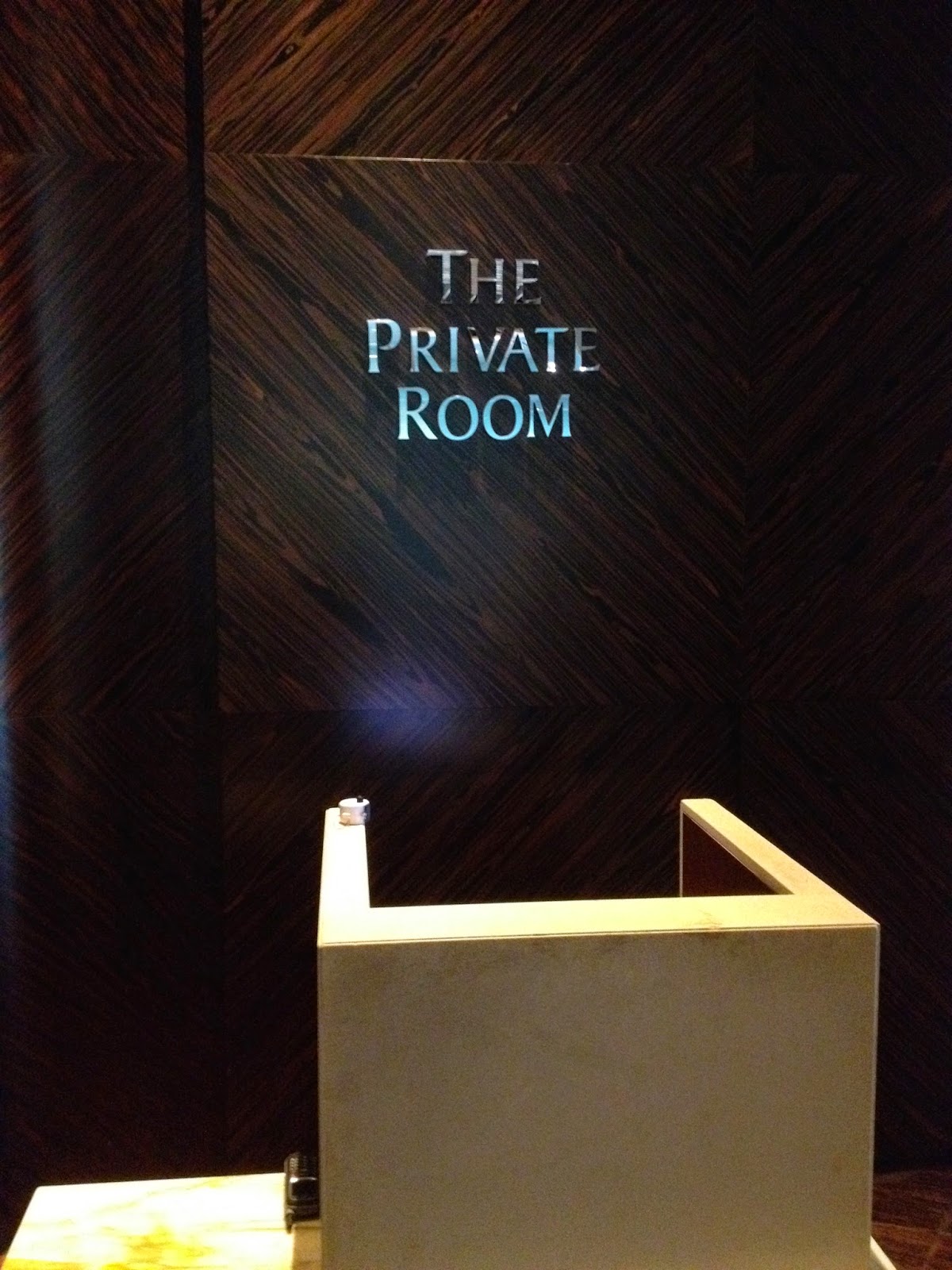 The SilverKris and First Class Lounge are open 24 hours, but The Private Room is closed from 2am to 5:30am. My flight from Tokyo landed at 3:13am, leaving me over two hours to kill in "just" the standard First Class Lounge. (The lounge wi-fi was noticeably fast.) 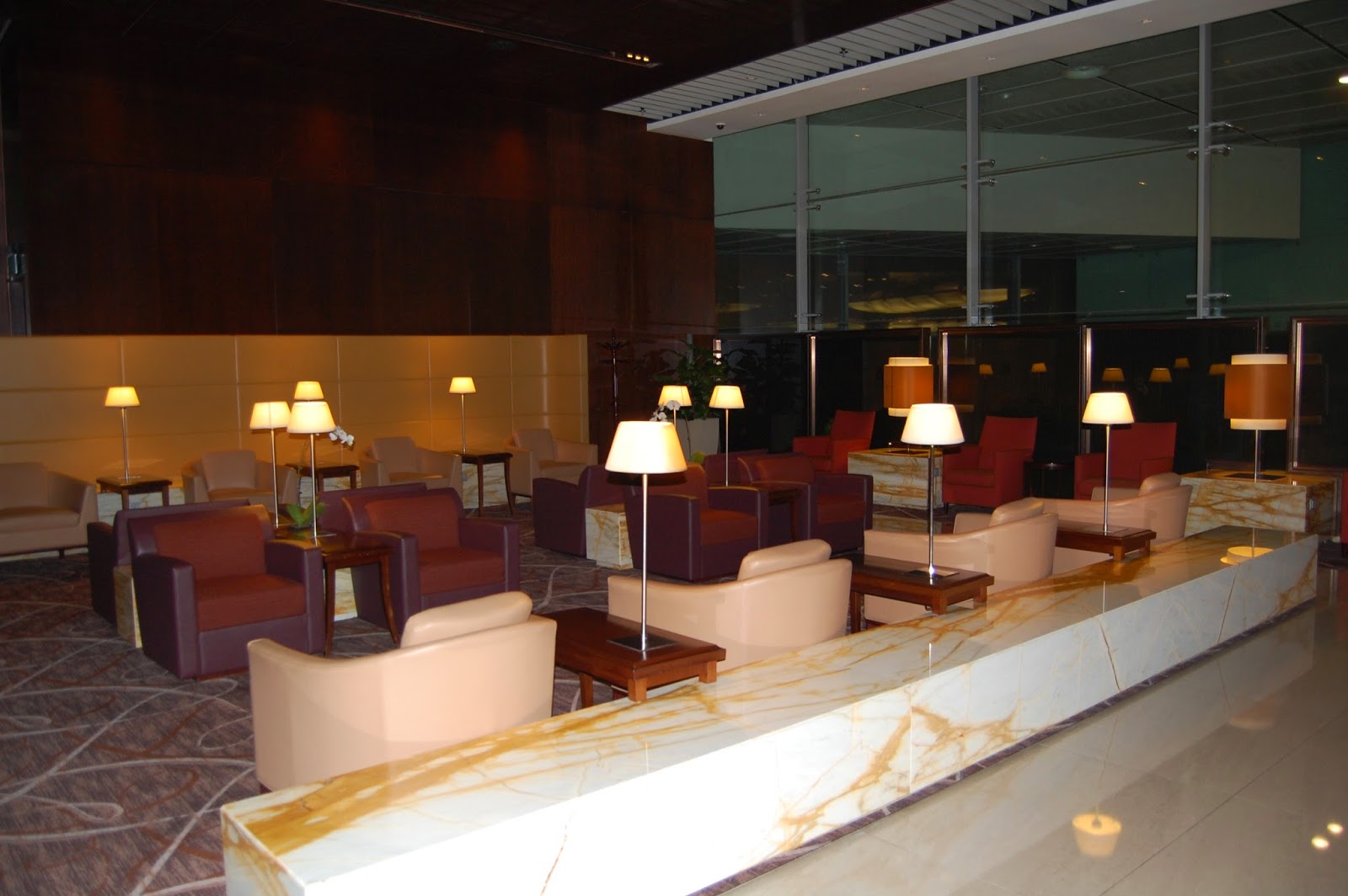 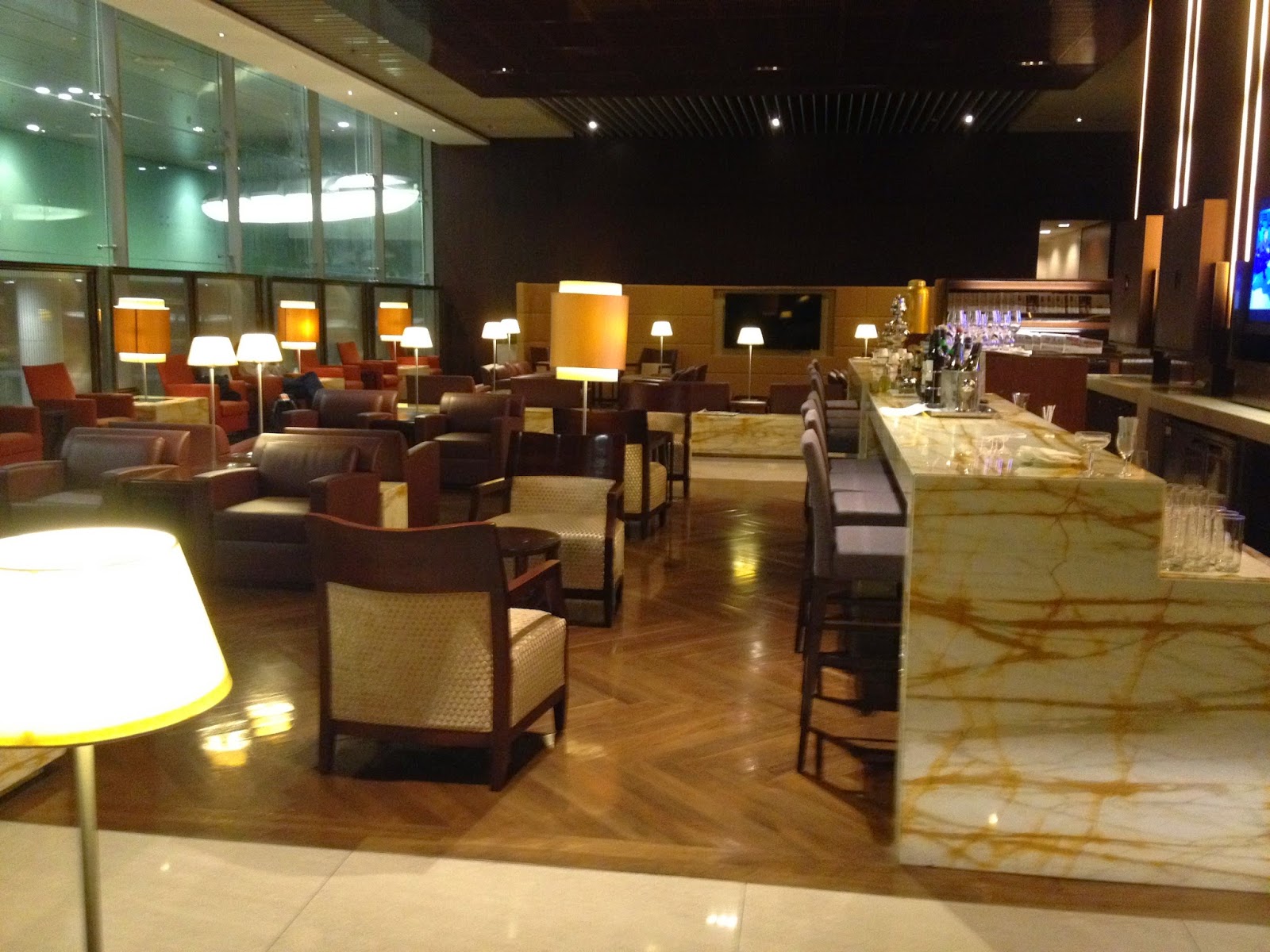 There's quite a bit of seating (even more so since I was one of three people in the lounge). That's good. What's bad, though, is that there's almost no food before 5:30. 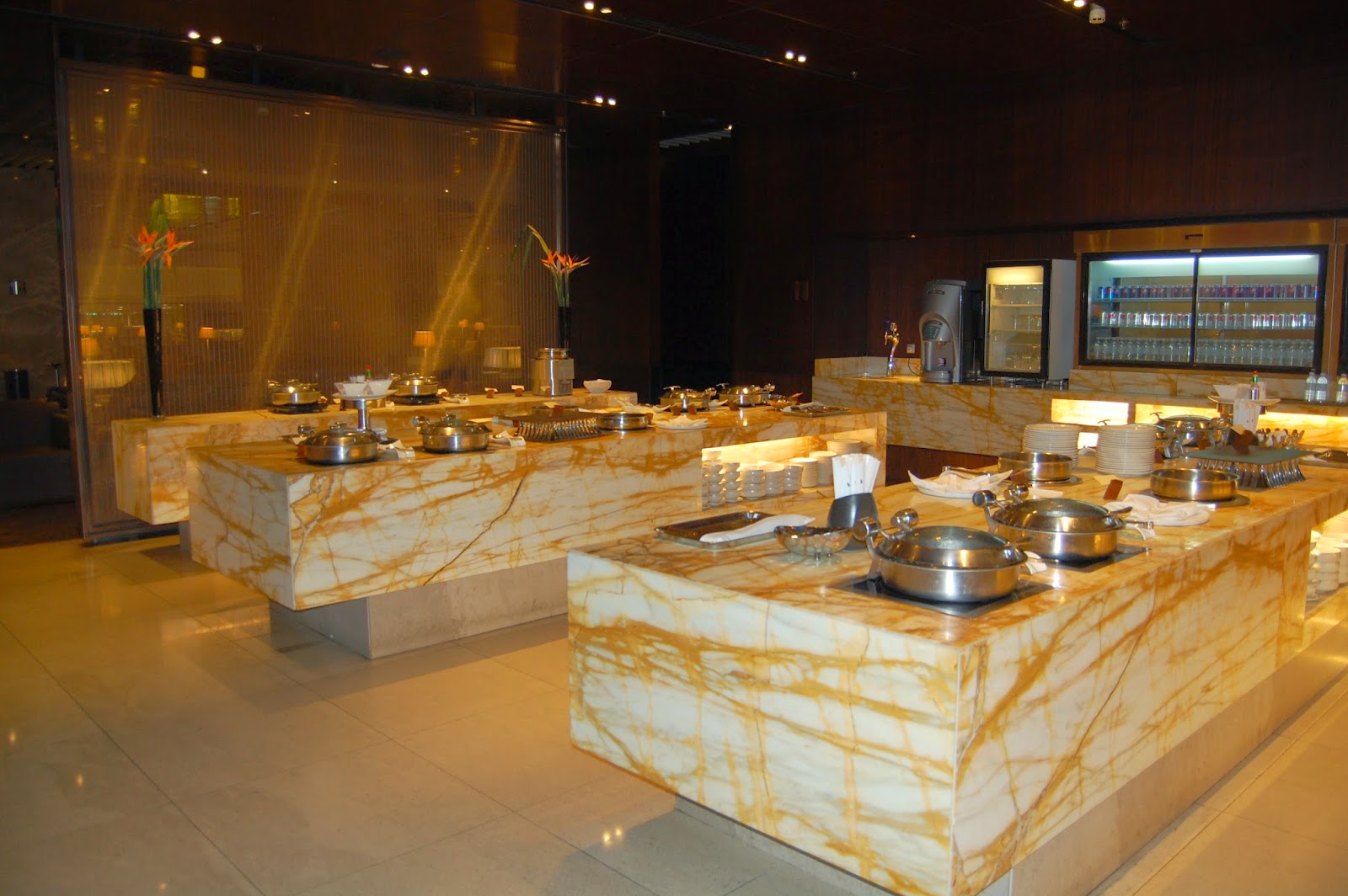 First Class Lounge buffet - these tureens are all empty 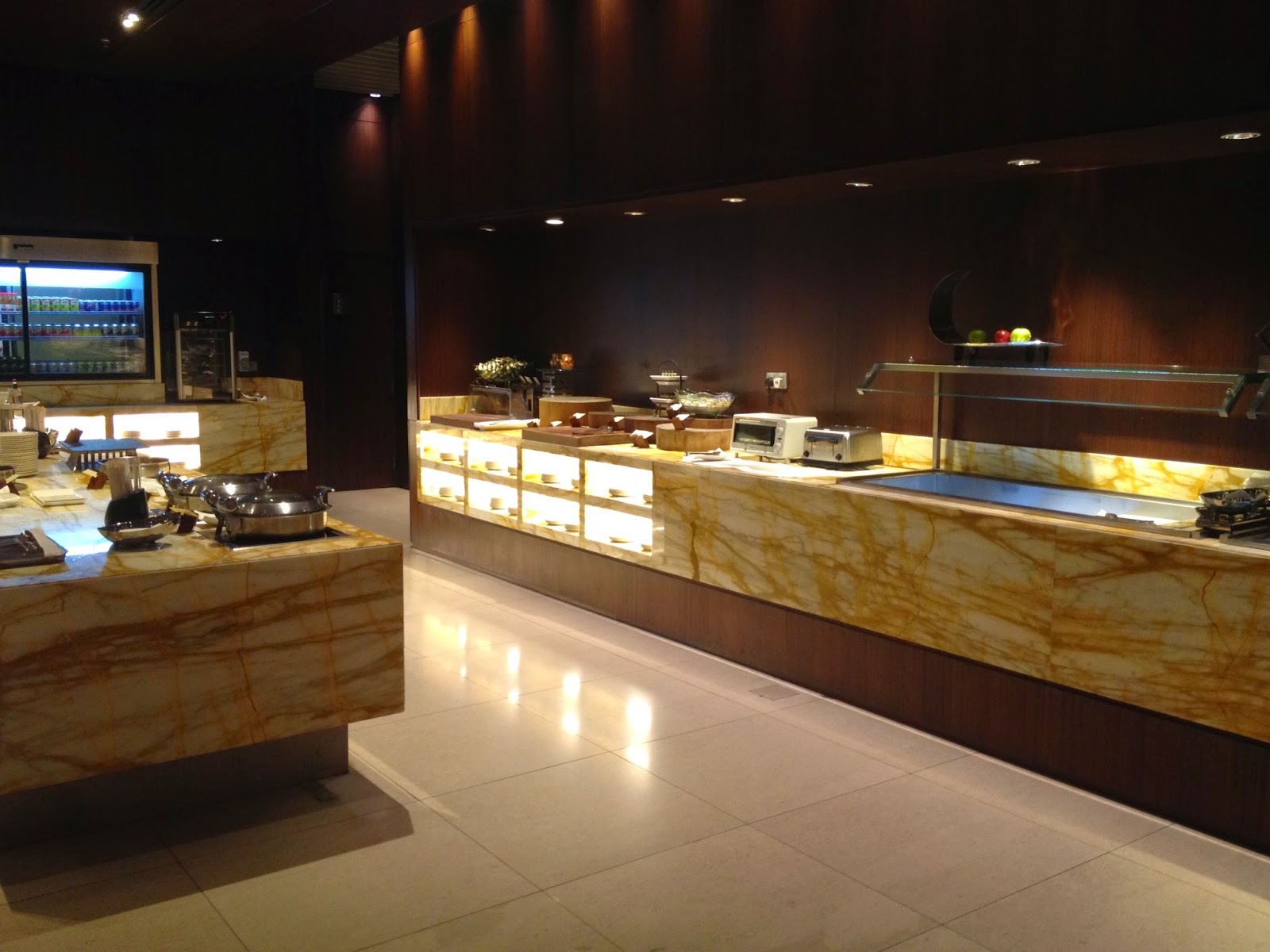 I finally tracked down some sandwiches on the business-class side of the lounge. 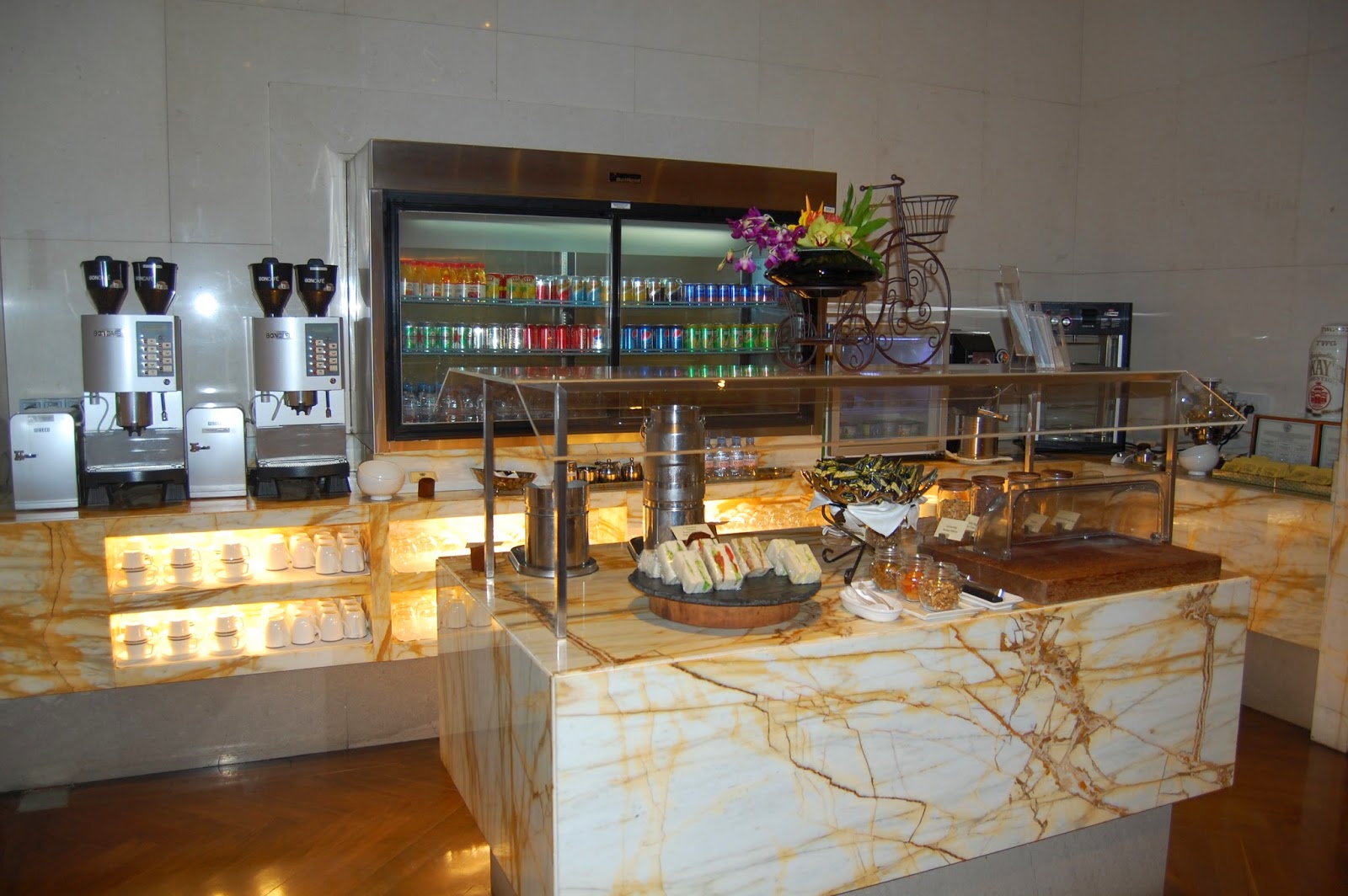 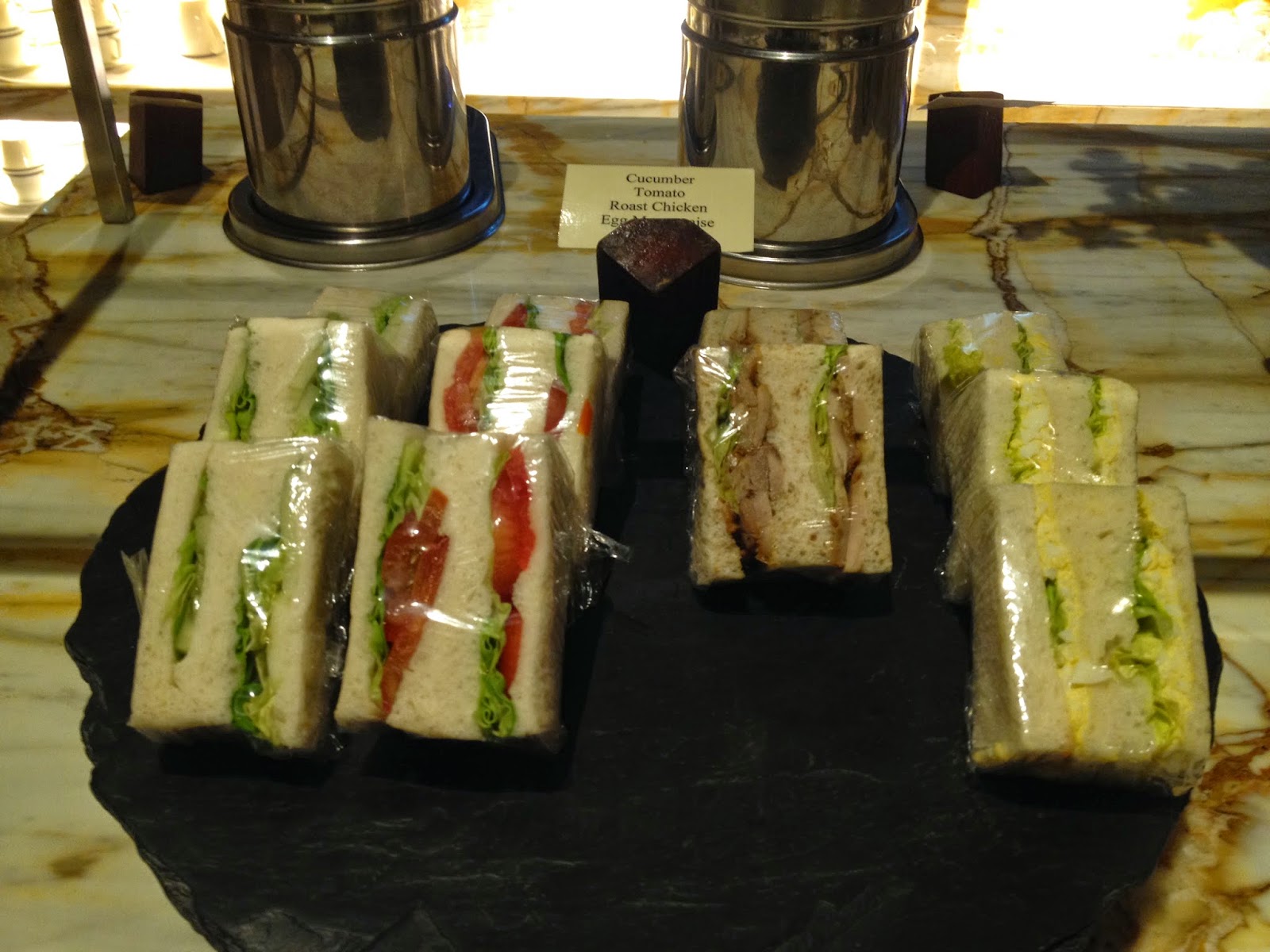 The only "real" food in the lounge 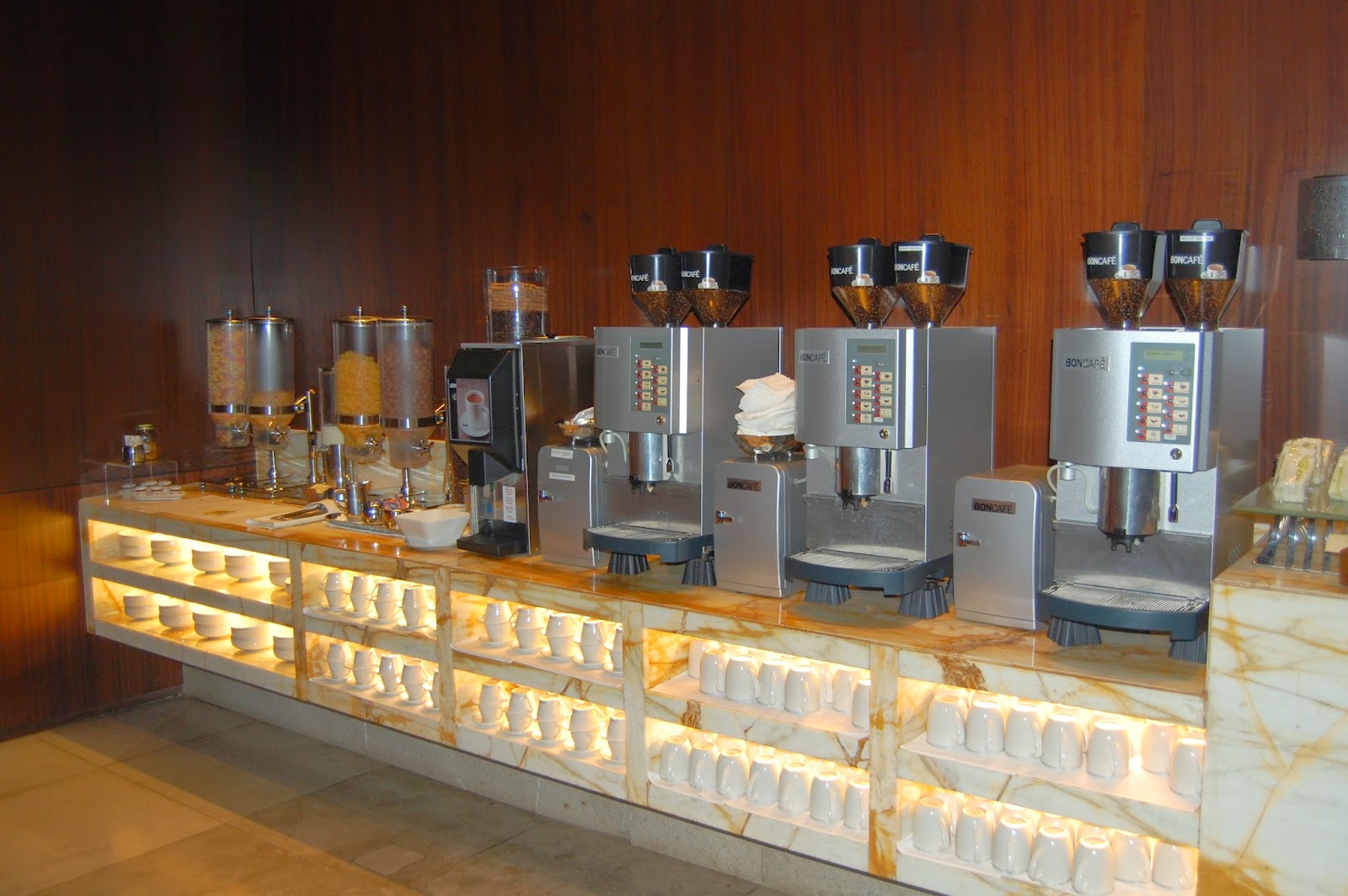 I grabbed a seltzer water and browsed the internet for a little while. There's not much more to see of the lounge: there was a small conference room and a computer area. 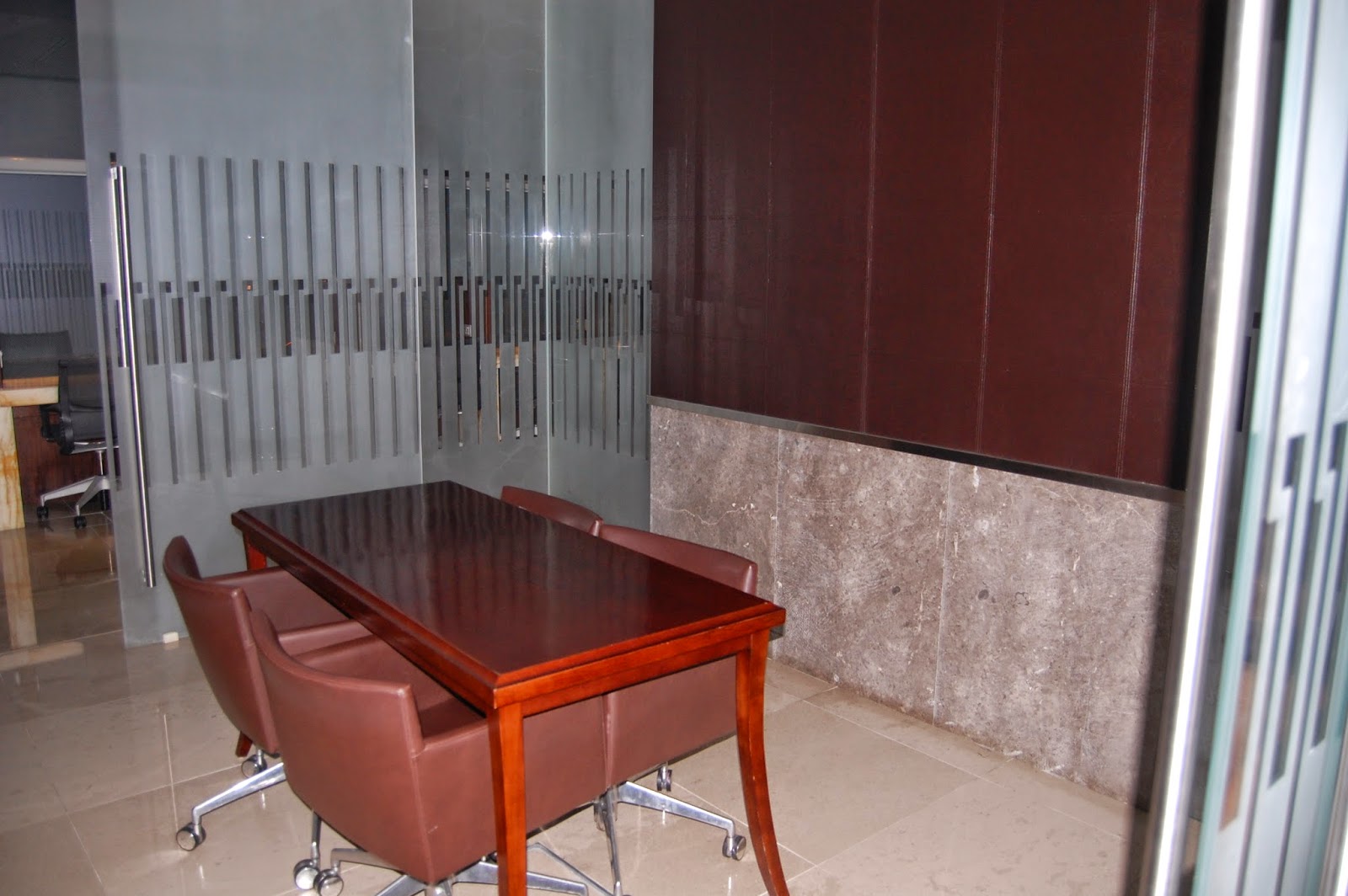 It's a little spartan 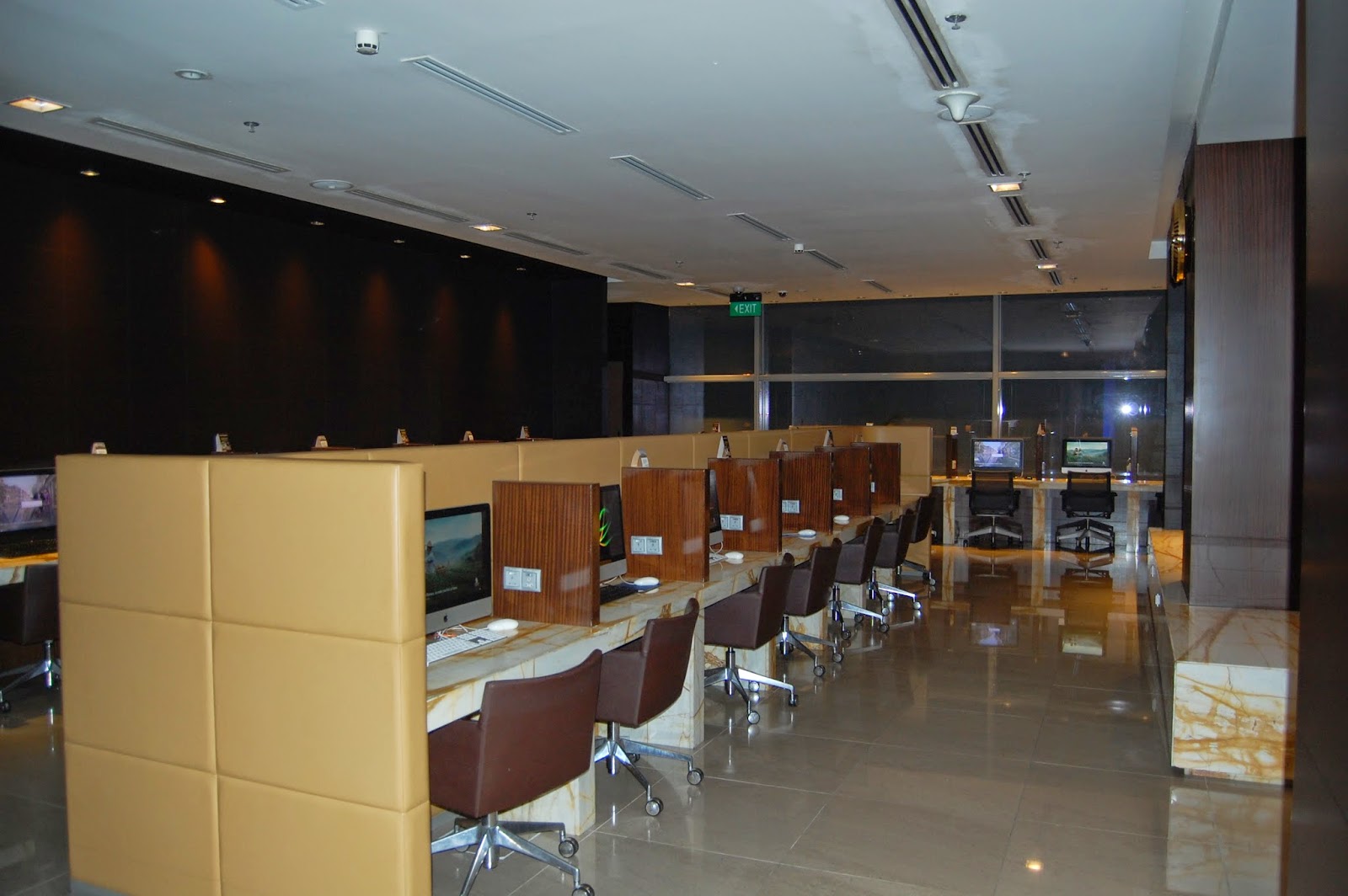 Overall, I think the First Class Lounge is fine - lots of seating and quiet, but kind of dark and no frills. At no point did a lounge attendant come by offering drinks / food / anything. But at 5:30am, The Private Room opened.

And The Private Room is beautiful. 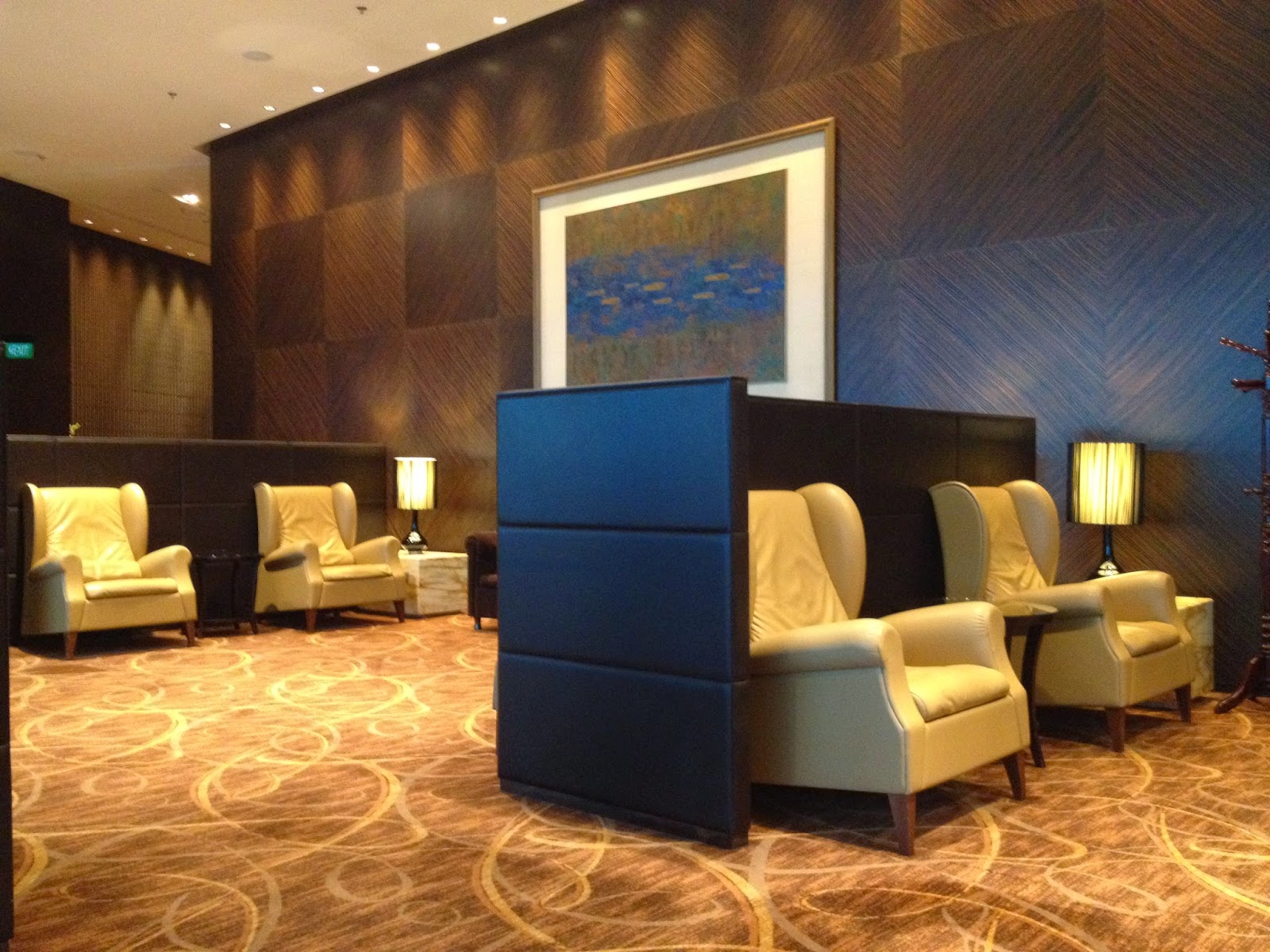 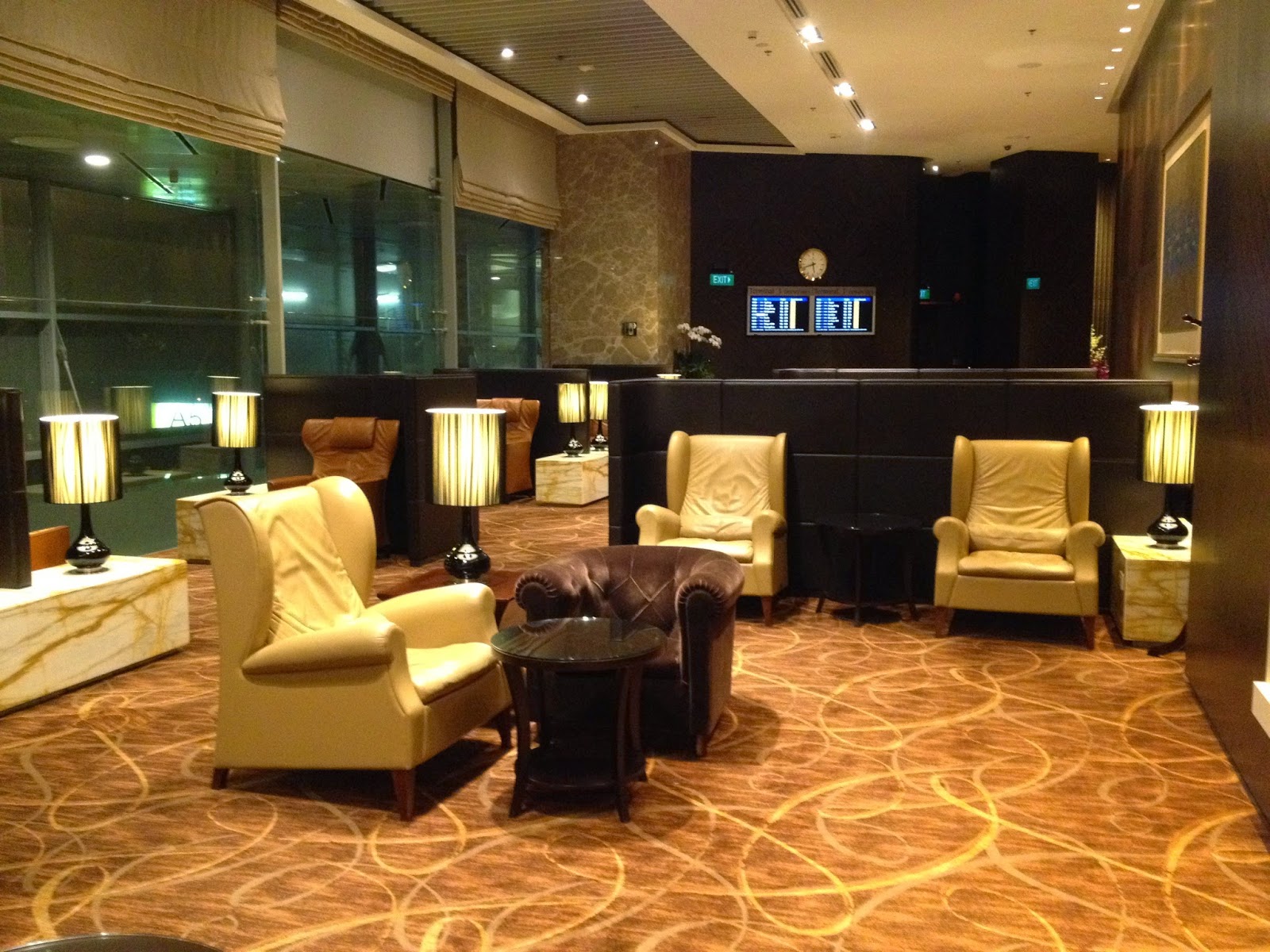 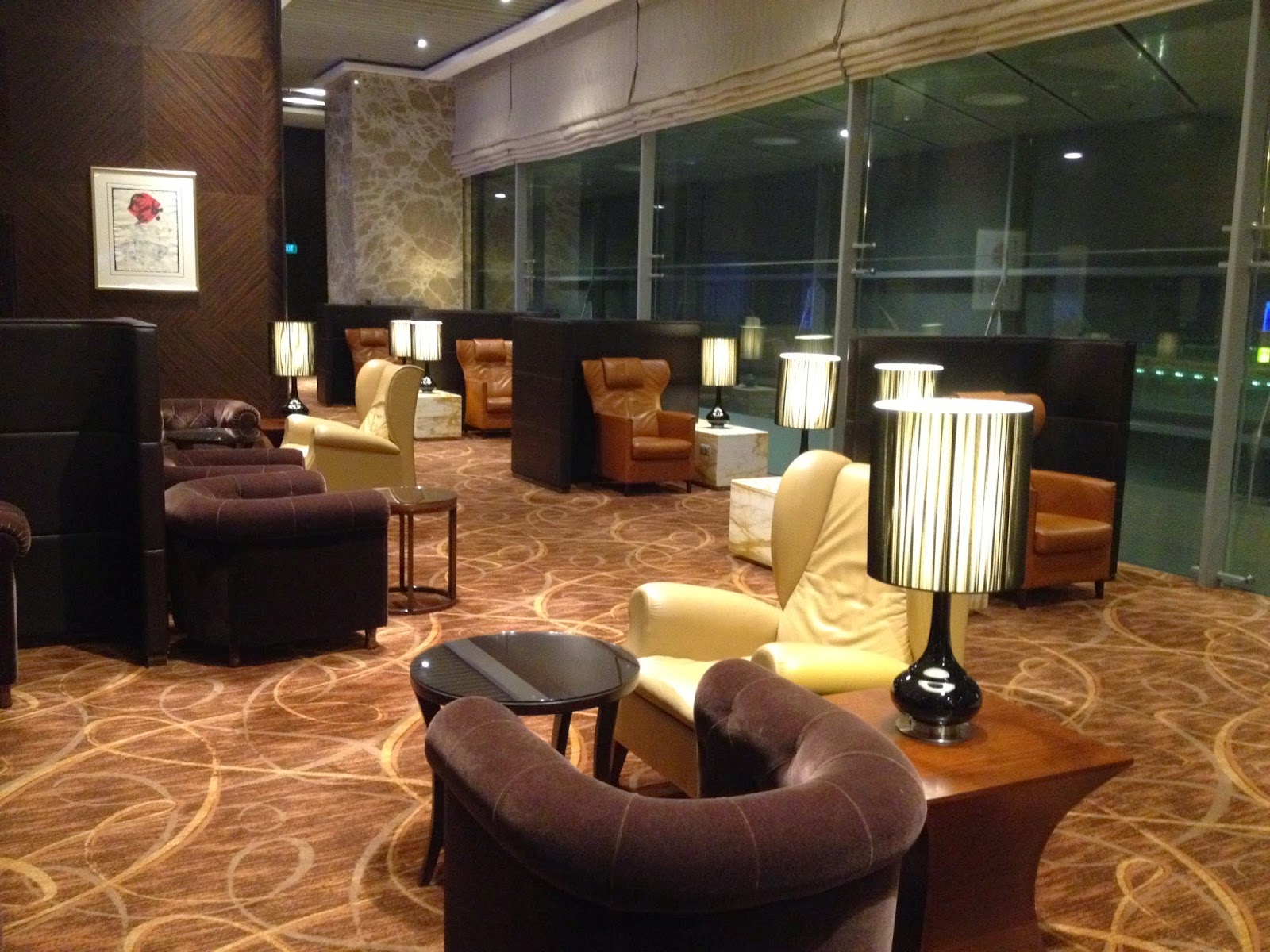 It's about the same area as the First Class Lounge, but the seating is much better spaced and feels more private. 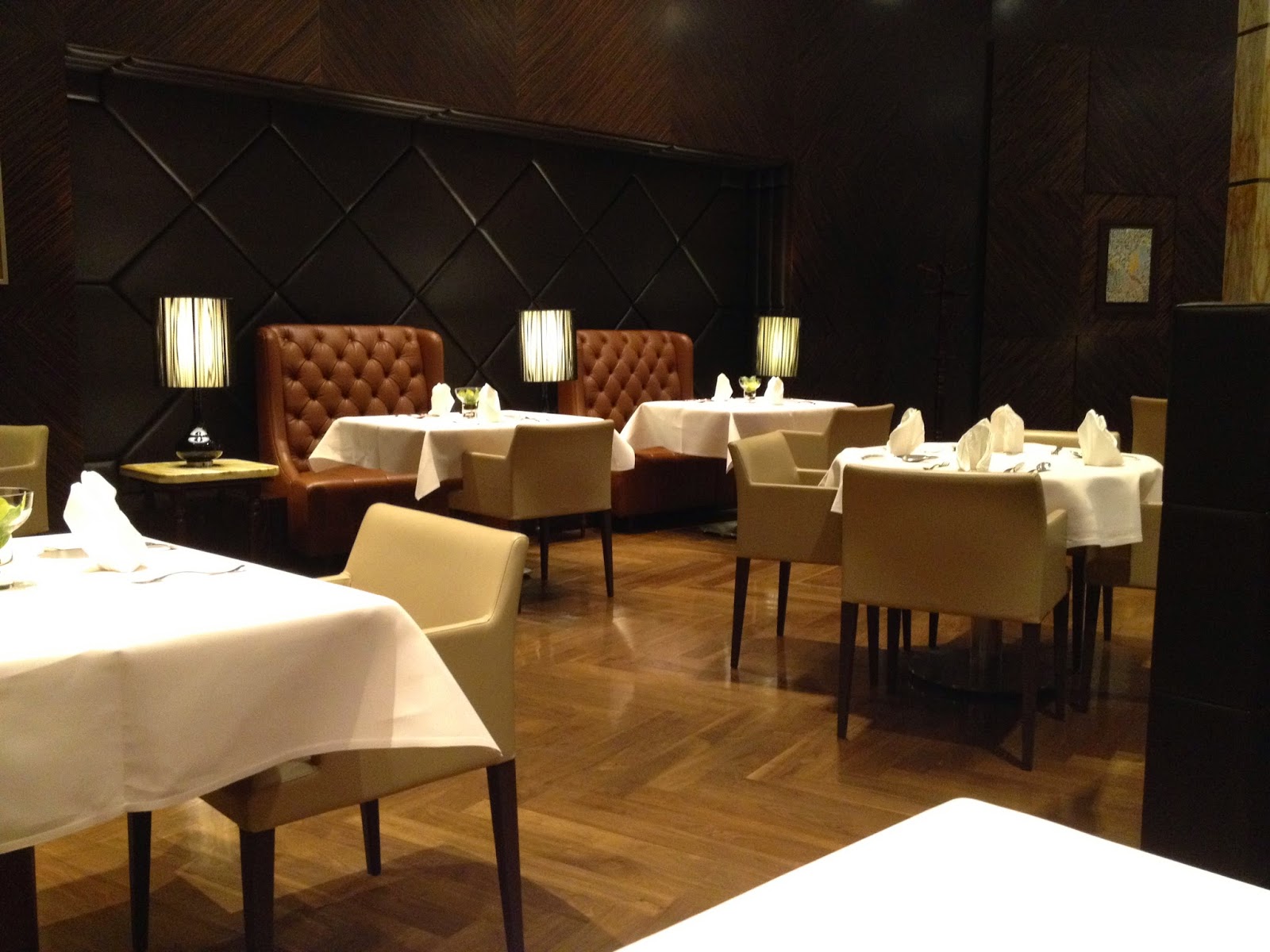 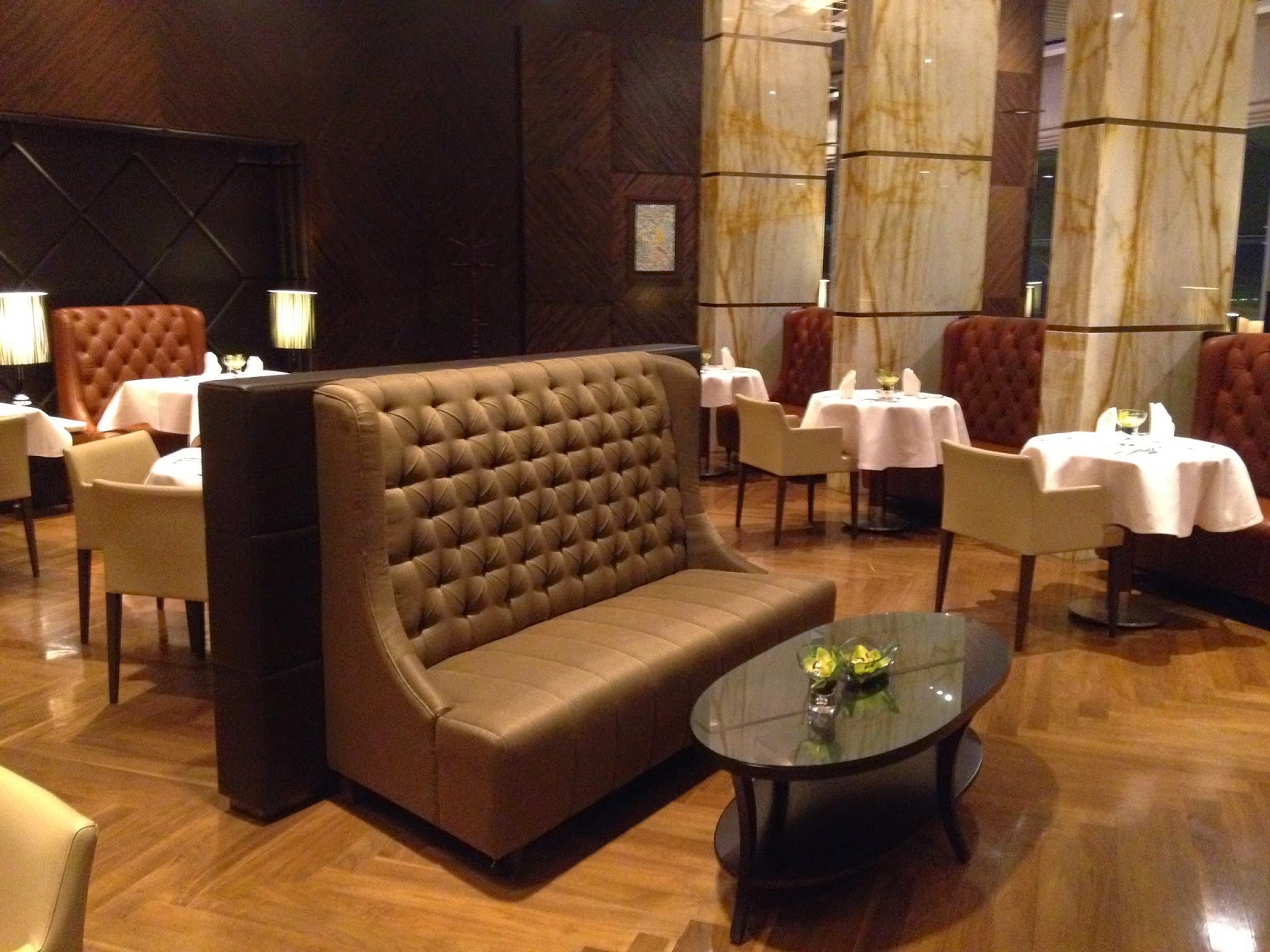 I was the only person in the dining area. A waiter approached me with a menu: 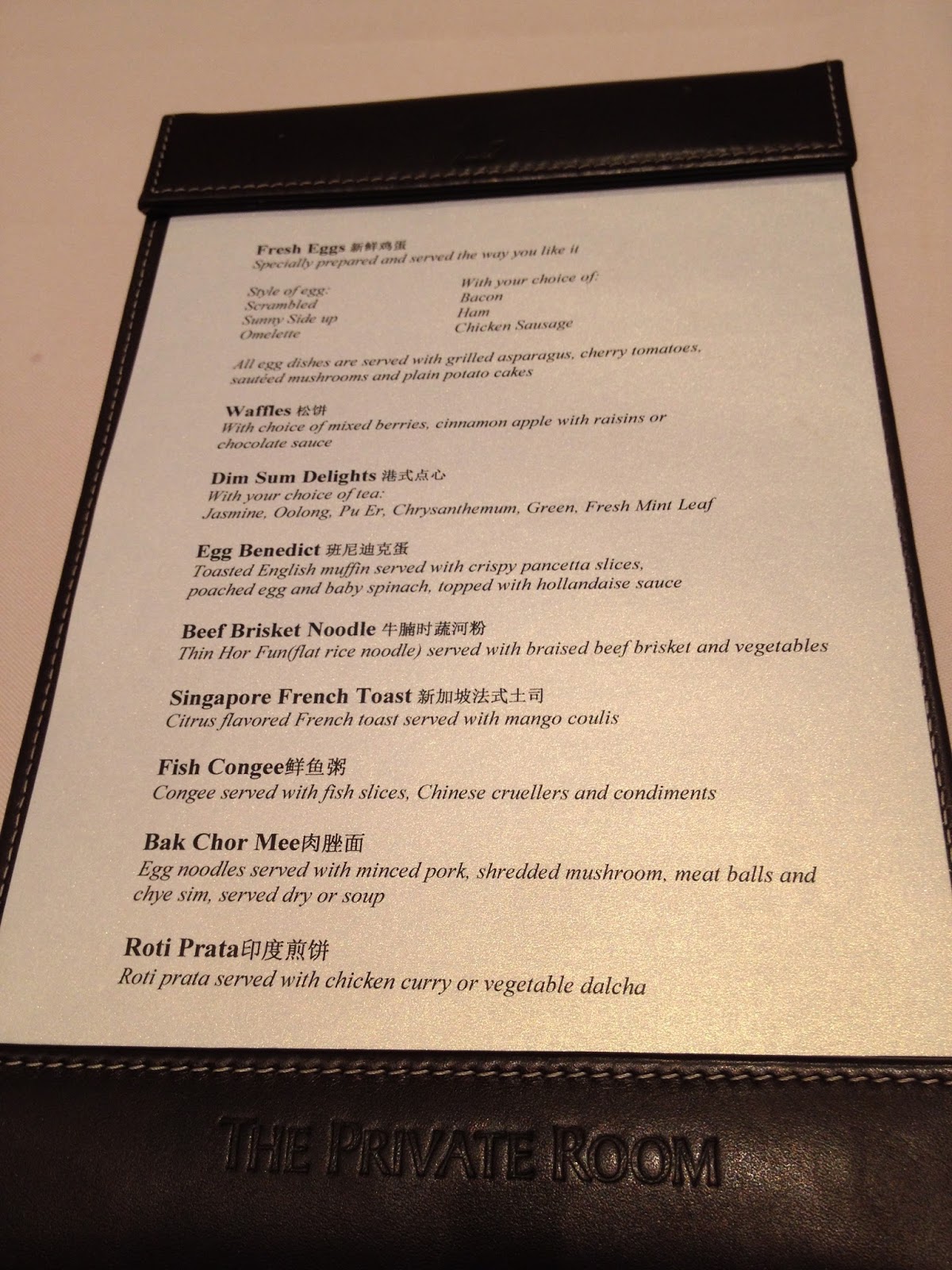 It's an impressive menu: it's not very long, but it has both western and Asian options - I think almost everyone could find something on here that they actively want to eat.

I started with the roti prata - a Malay/Singaporean bread similar to Indian naan, usually served with a curry dipping sauce. 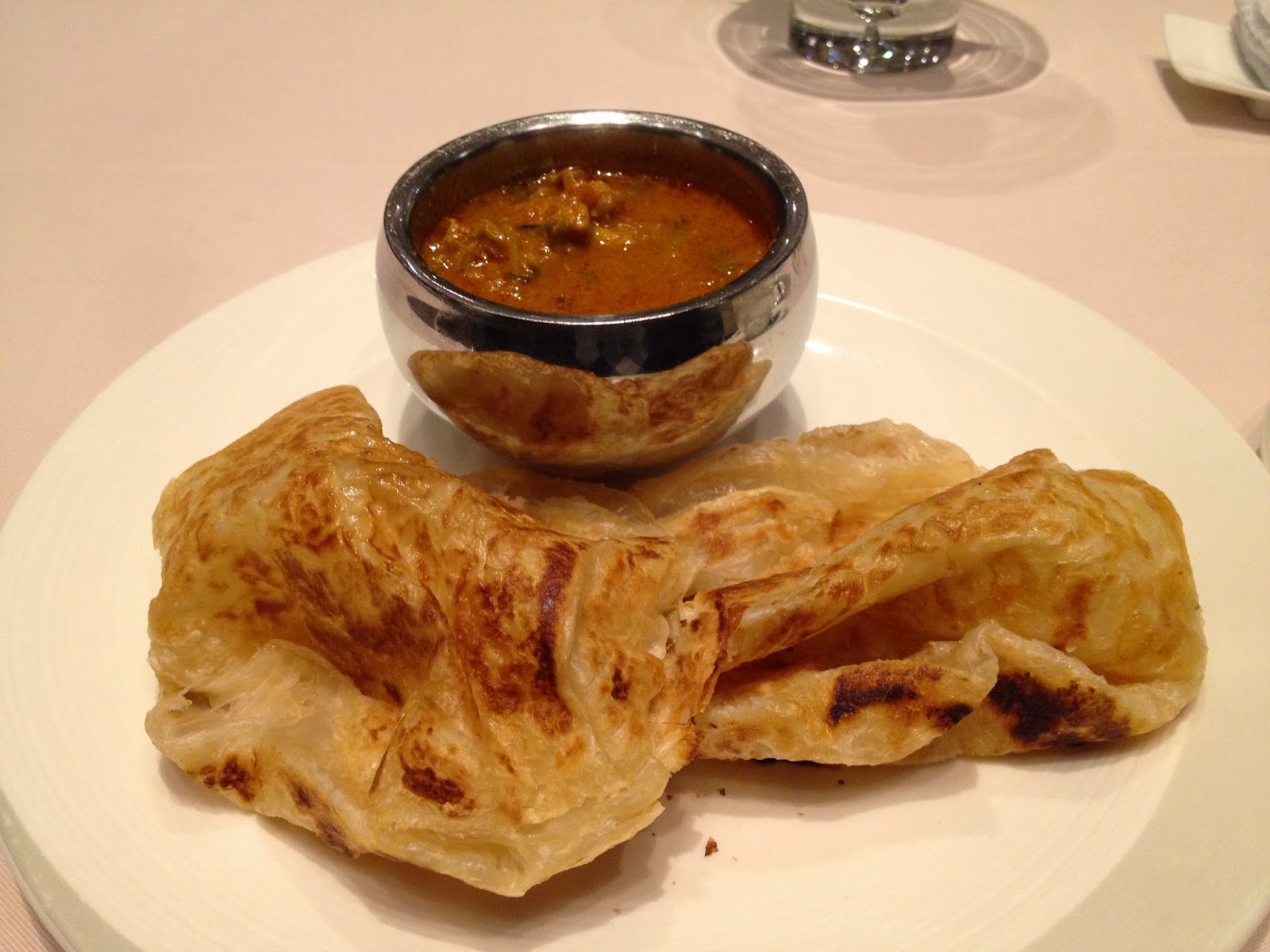 The curry was spicier than I expected. It had flavorful chunks of chicken that I fished out with a fork and ate with the delicious roti. I was still a bit hungry and asked for the Singapore French Toast. 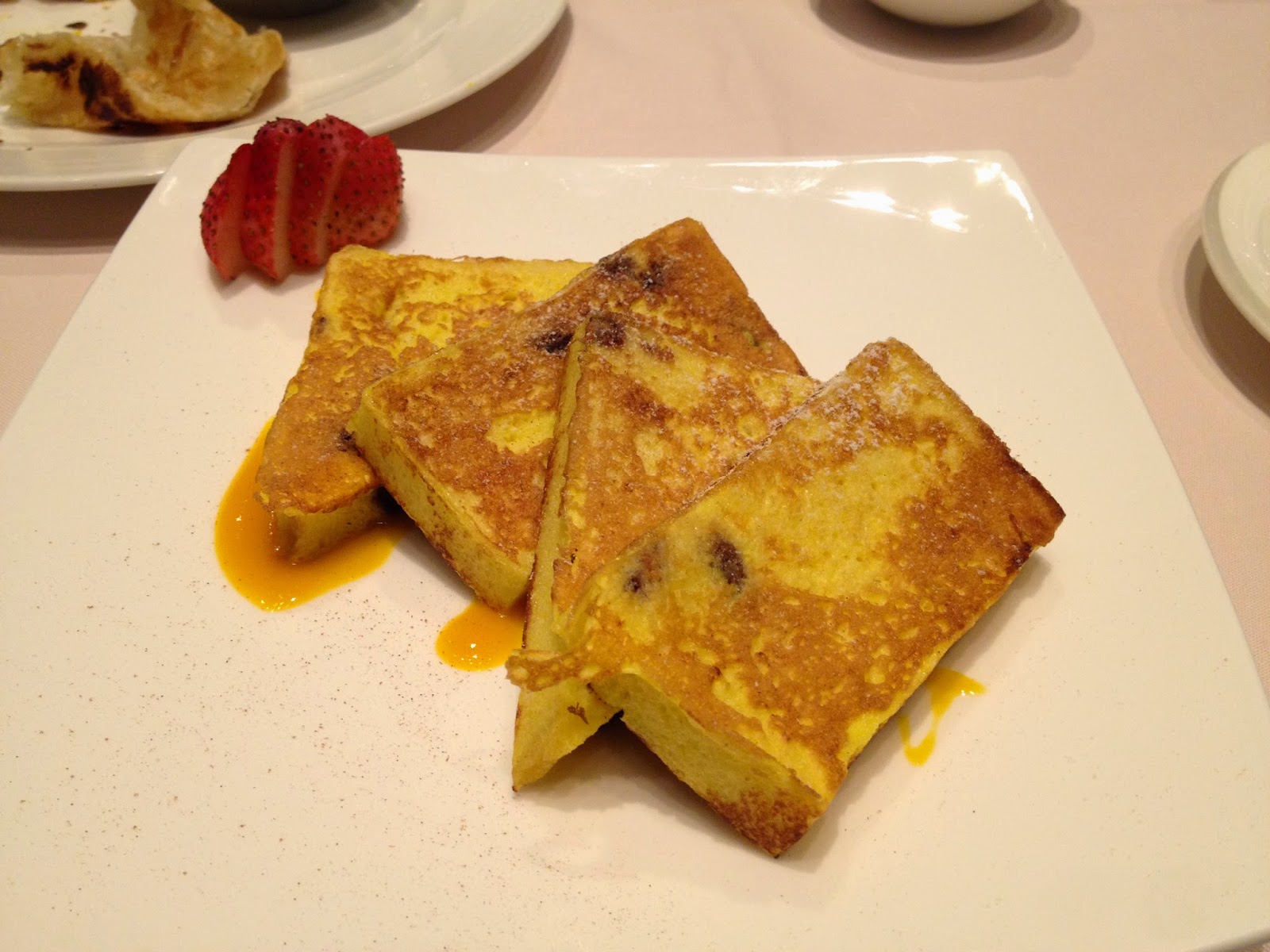 I probably should have tried something more interesting like the dim sum or the congee. The french toast wasn't bad - it just wasn't particularly exciting. (But as french toasts go, it was perfectly executed).

By about 7:30am, The Private Room started filling up. Nevertheless, a lounge attendant came by my chair every ten minutes or so, addressed me by name, and asked if I would care for something else to eat or drink. This was doubly impressive because the lounge attendants didn't appear to be assigned a particular area - each attendant (there were about six circulating) had each passenger's name memorized.

Like the flight attendants, Singapore Airlines's lounge staff seems to have found the perfect balance of delivering excellent personalized customer service without being awkward or obsequious. That's hard to do.

A lounge attendant came by to let me know that my gate had changed and to allow a bit of extra time. Then, as I was exiting the lounge, another attendant called out, "Oh, Mr. Pointiff? I just wanted to remind you that your gate has changed. I hope you had a nice stay in The Private Room. Is there anything else I can do for you?"

And there was. I had a couple of postcards to send, but wasn't sure where to buy stamps.

"No need to wander around the terminal - I would be happy to mail those for you." Wow. Extra mile.

By the time I left, both The Private Room and the separate First Class Lounge were almost completely full.

The lounge attendants were right. I needed extra time to get to the gate. There's an additional security screen in front of the gate area, and there was a very long line of passengers waiting to be screened. 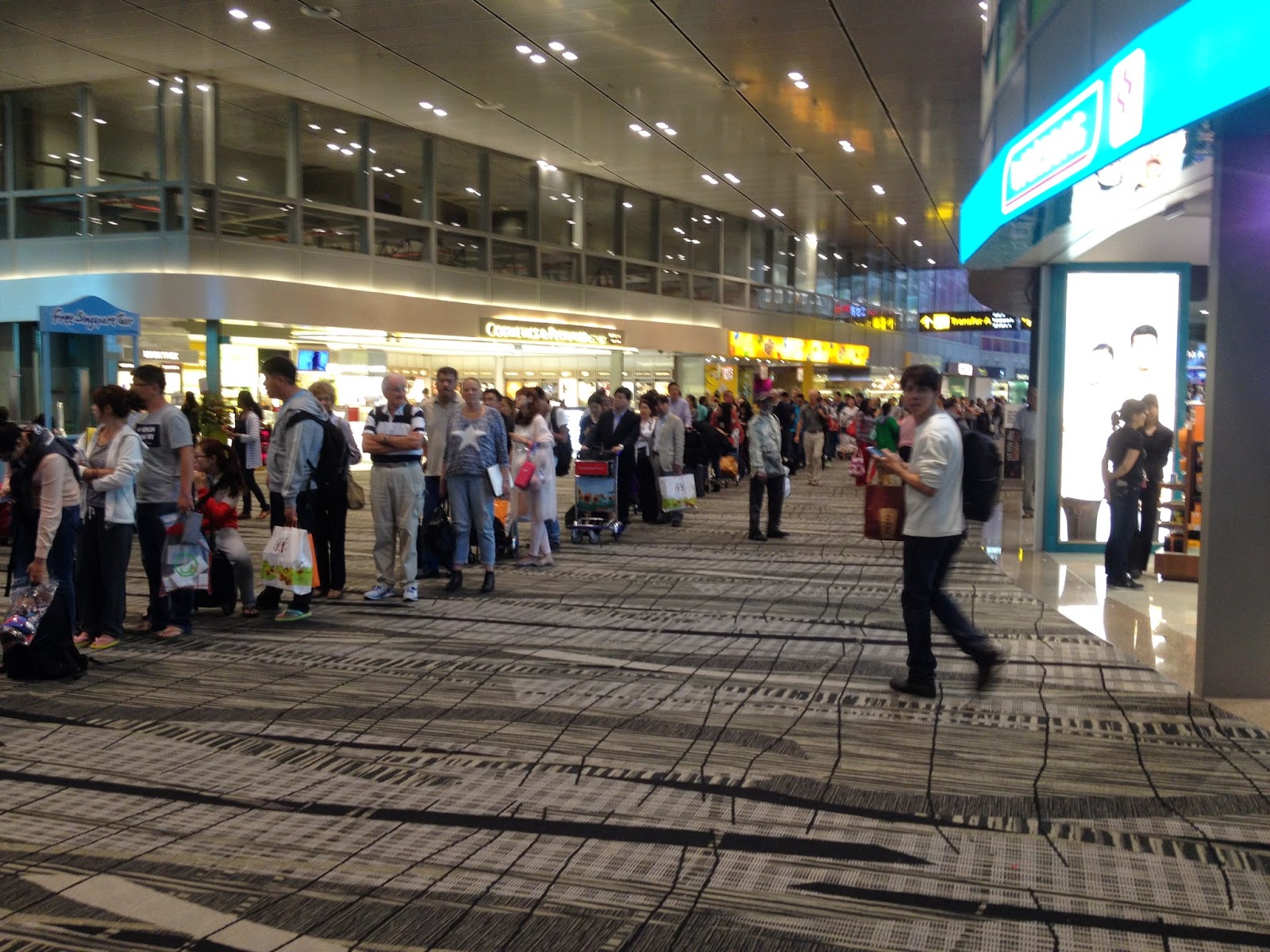 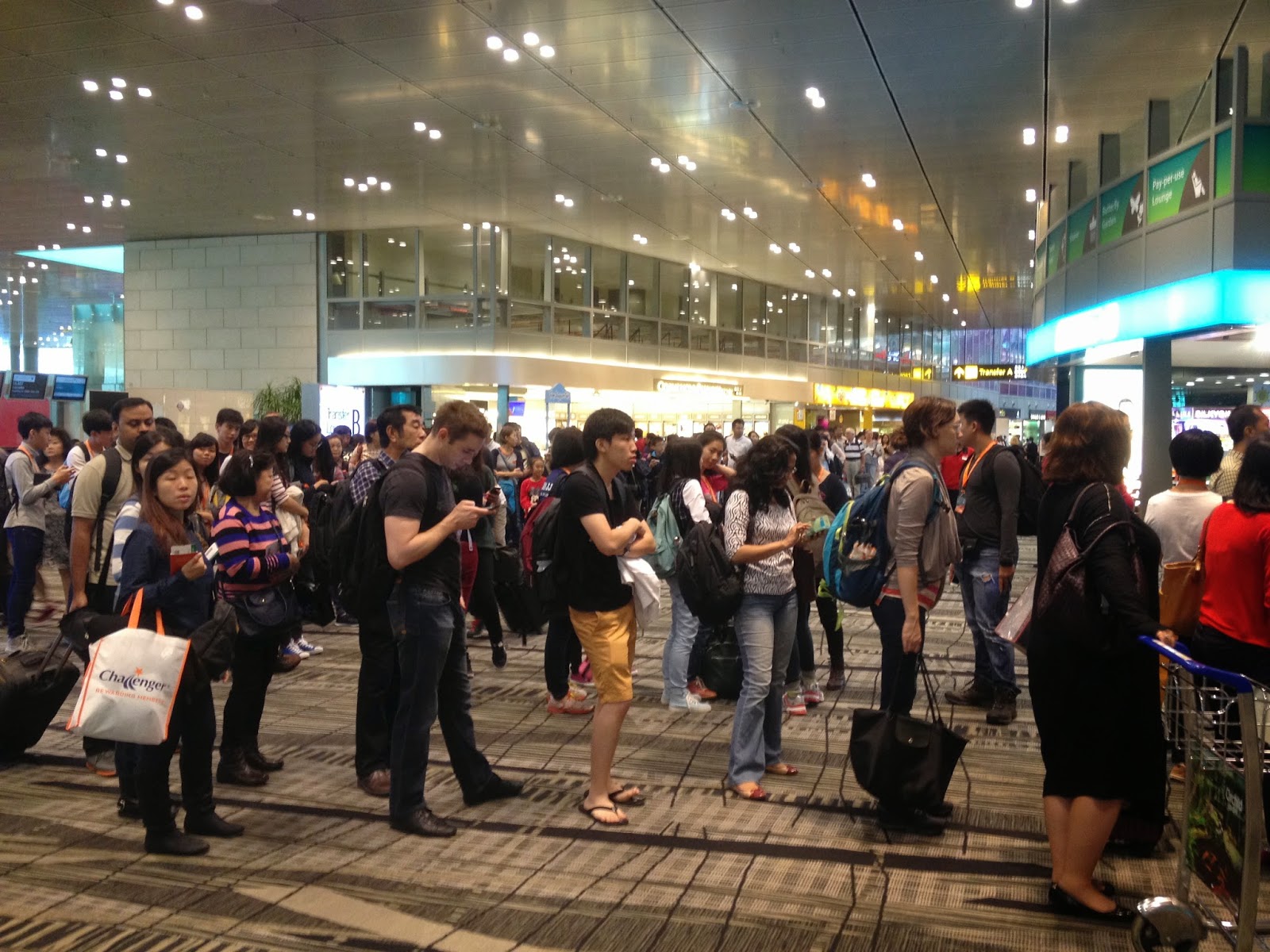 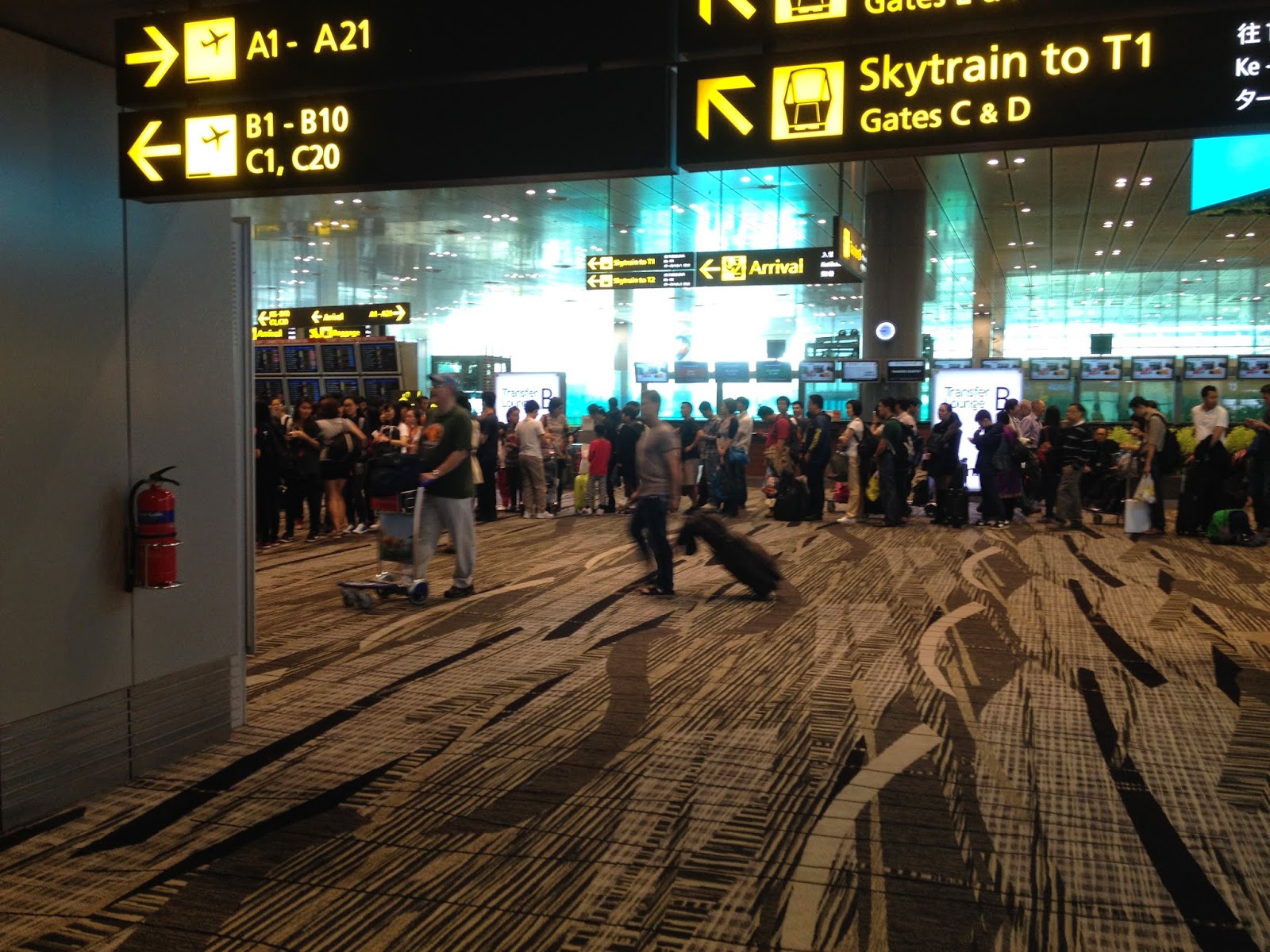 This is what happens when you make a last-minute gate change and you have a full A380 going through two lanes of security.

There was an airport official near the front of the security line; every few minutes, someone would ask her where the Business Class or Suites Class line was. There wasn't one. If I were a revenue Suites passenger paying tens of thousands of dollars for a ticket, I would be annoyed about waiting in a 400-person deep line.

Conclusion
I understand why The Private Room is part of the Great Lounges canon. It doesn't have anything particularly special such as a massage room or chauffeur to the plane, but the service is impeccable and the food is really, really good.

The lack of a "premium passenger" security line is confusing. Singapore Airlines generally has excellent customer service, and this was a bad last impression of Changi Airport. The infrastructure was there - there were four security lanes, but only two were open - it's puzzling why Singapore Airlines cut corners by only paying for two lanes of security. Hopefully, it's just because we had a last-minute gate change and airport personnel were left scrambling.