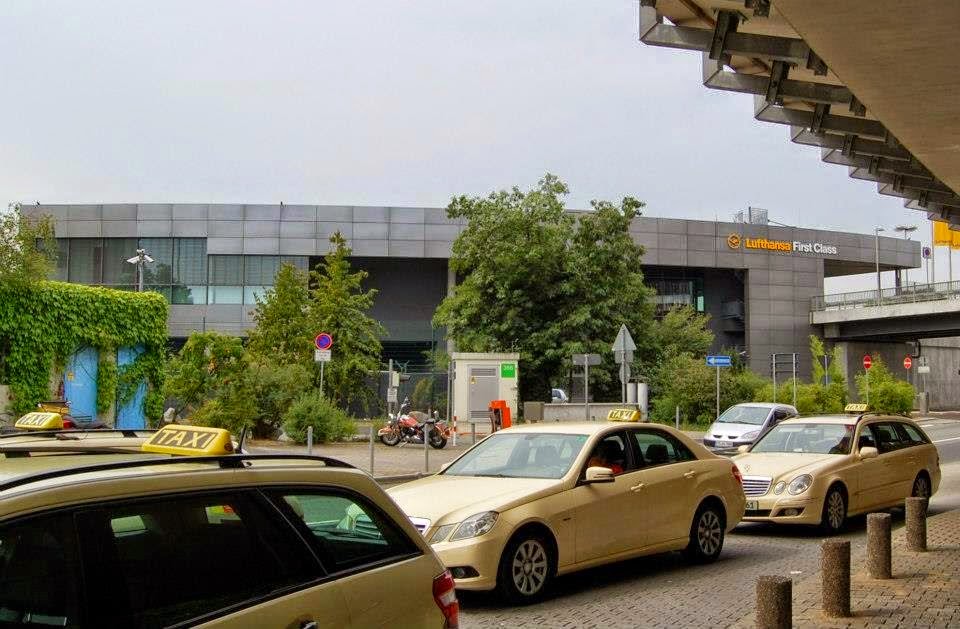 But you're out of luck if you're flying first class on another Star Alliance carrier - Lufthansa's First Class Lounge and Terminal are for Swiss and Lufthansa First Class passengers only (and their 300,000-mile-a-year HON Circle elite members). 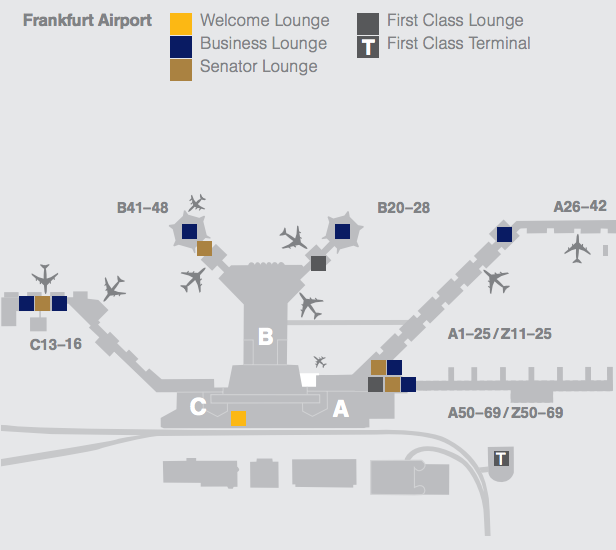 I think the idea is that the First Class Terminal (or FCT, for those in the know) is designed for passengers originating in Frankfurt and the First Class Lounges are for transiting passengers. But if you're transiting and willing to clear immigration, there's nothing stopping you from enjoying the terminal.

Arriving by taxi? Drive right up to the front of the FCT. Have a rental car? No problem. Pull up at the FCT and the Lufthansa staff will return the rental car for you. That's premium service. (I had a quick walk from the S-Bahn station to the FCT).

The main entrance to the FCT is on the second floor; there's an elevator that takes passengers from street level to the check-in facility. As I stepped off the elevator, a friendly agent greeted me. I handed him my passport and he led me through the FCT's private security facility.

It's a far cry from the TSA barking at you as you submit to the infamous nude-o-scope. Instead, a smiling dude in a suit says (in perfect English), "Welcome to the First Class Terminal. Would you be so kind as to remove your laptop if you have one?" The whole thing takes thirty seconds. 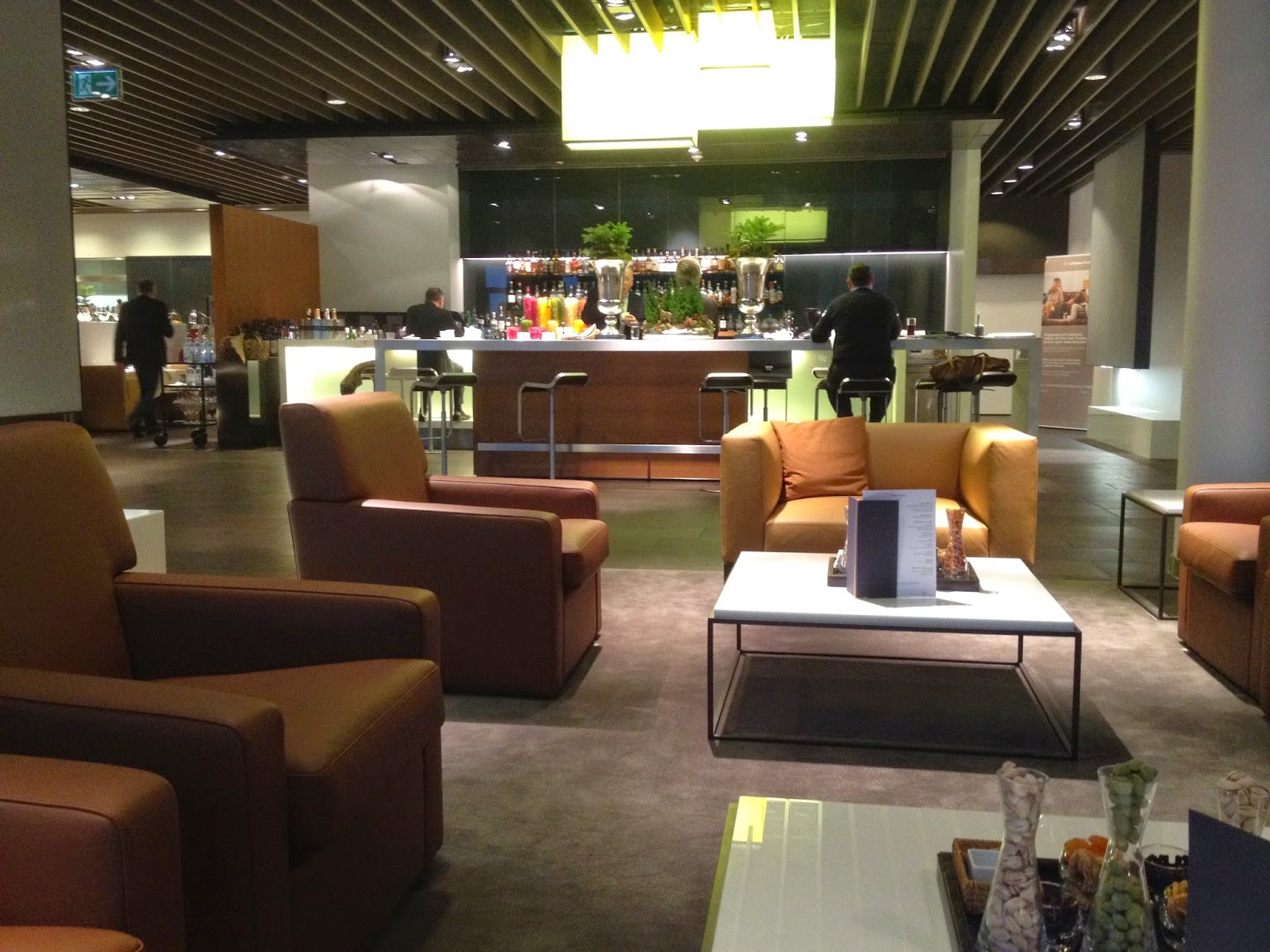 After security, the check-in agent explained that he would come get me when it was time to board my flight to Vancouver. I tried (unsuccessfully) to switch to the nonstop to San Francisco, but my United-issue award made the change impossible.

No problem. Let's get some breakfast. There was a buffet and a full menu (and plenty of elegantly set dining tables). 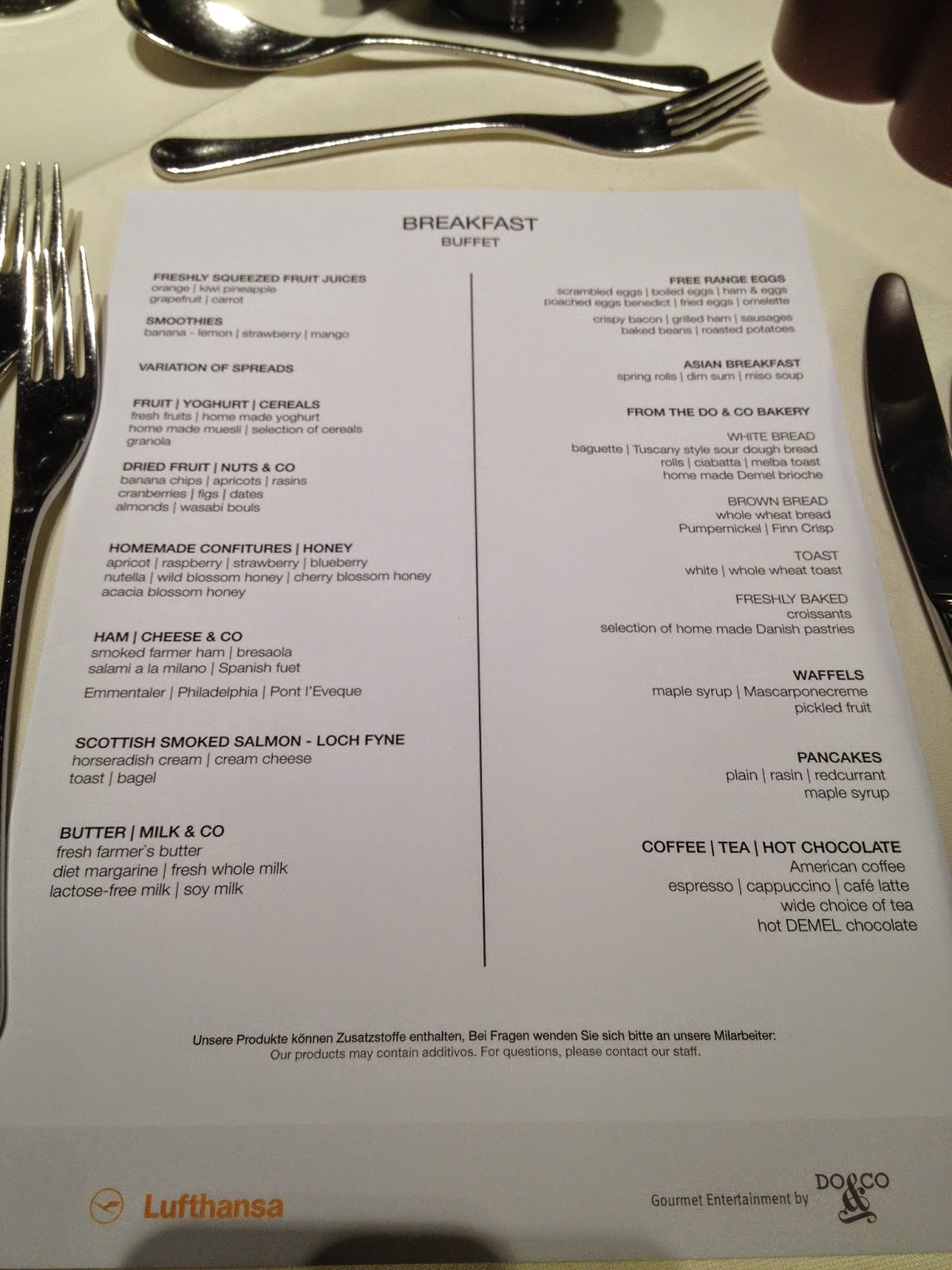 I got a little of everything from the buffet, which was extraordinary. Croissant with nutella; scrambled eggs with bacon, sausage, and potatoes; smoked salmon - this was one of the best breakfasts I've ever had. 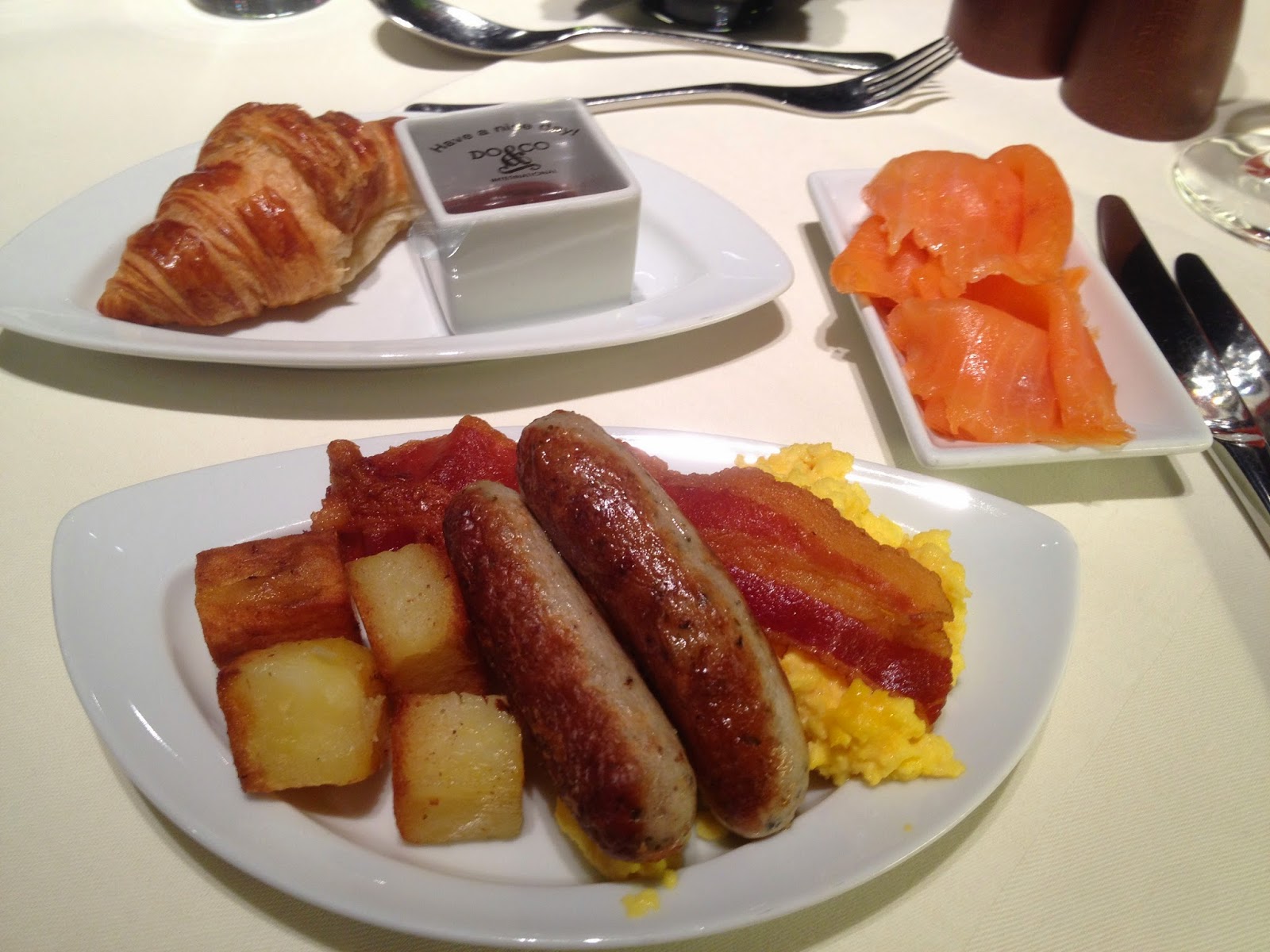 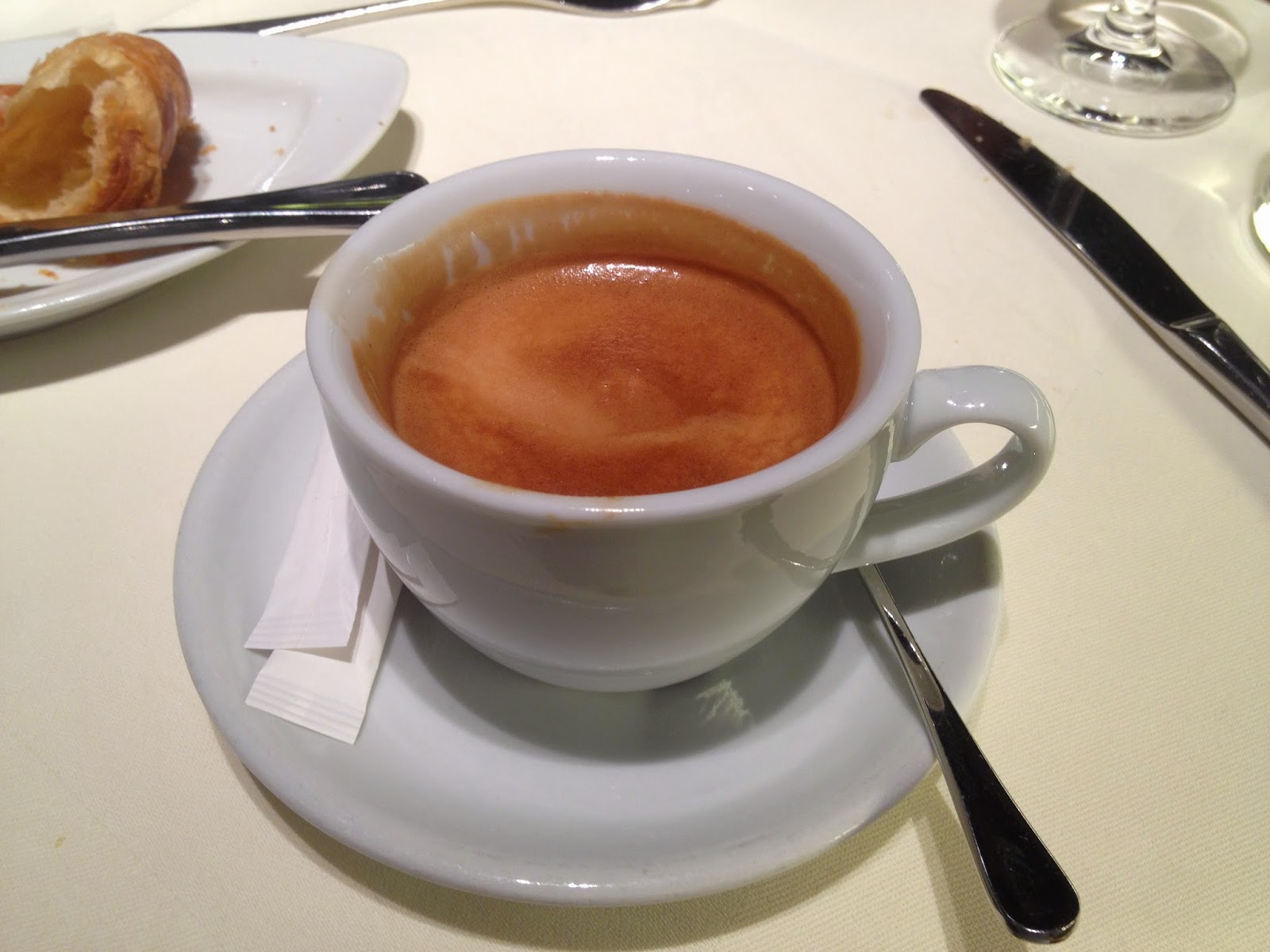 Unfortunately, I wasn't in the lounge for lunch, but I hear they do a mean Wienerschnitzel. 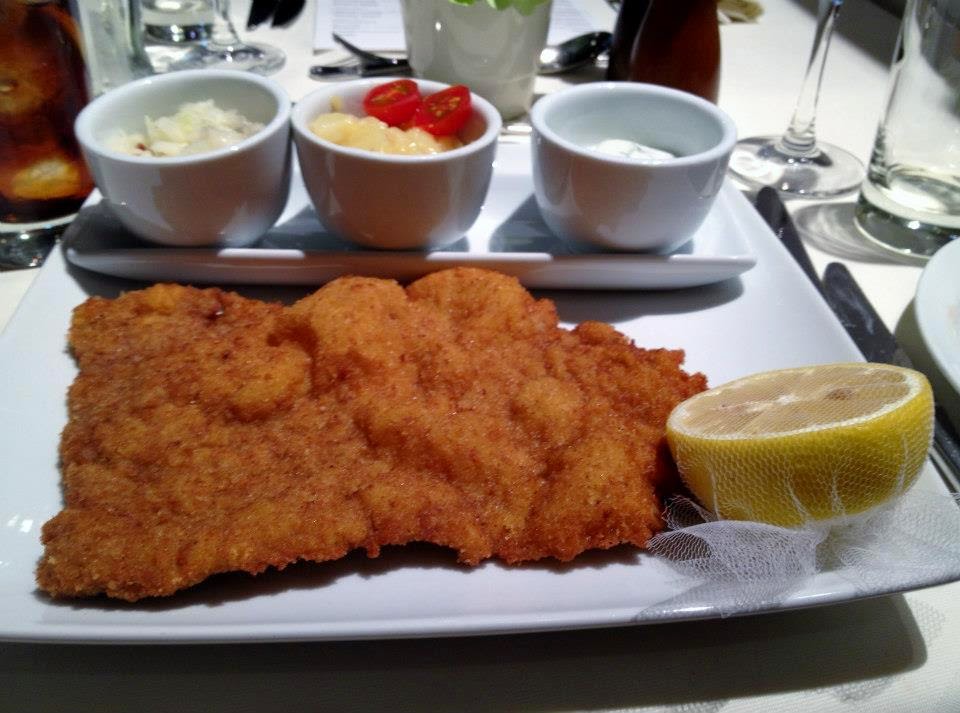 Wienerschitzel (from a previous trip)

After breakfast, I walked by the well-appointed bar... 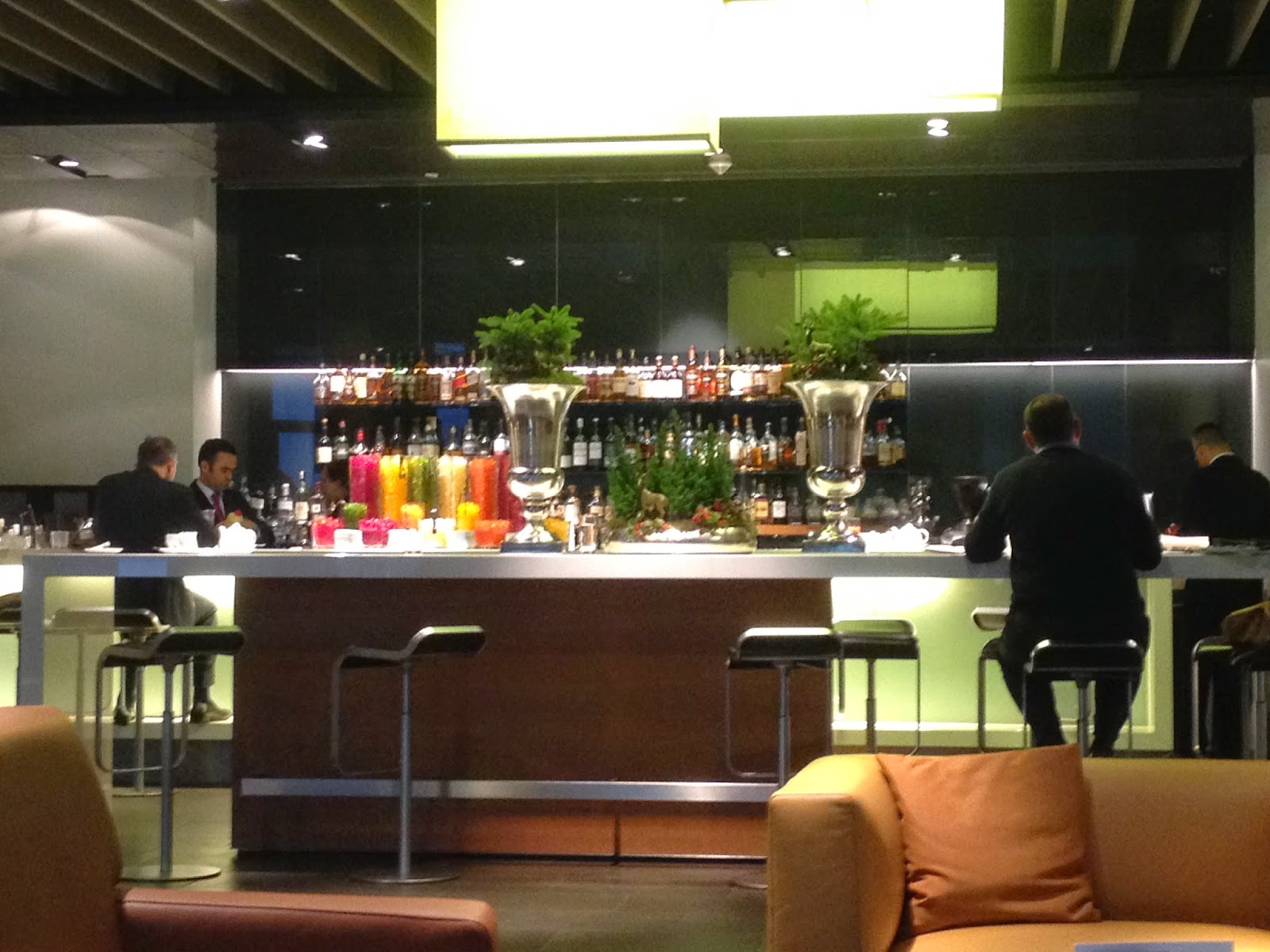 ... to the shower rooms. Unfortunately, the rooms with the bathtubs were occupied, but the attendant took my name and told me she'd come get me soon. In the meantime, I had a seat at one of the many tan leather armchairs in the lounge. 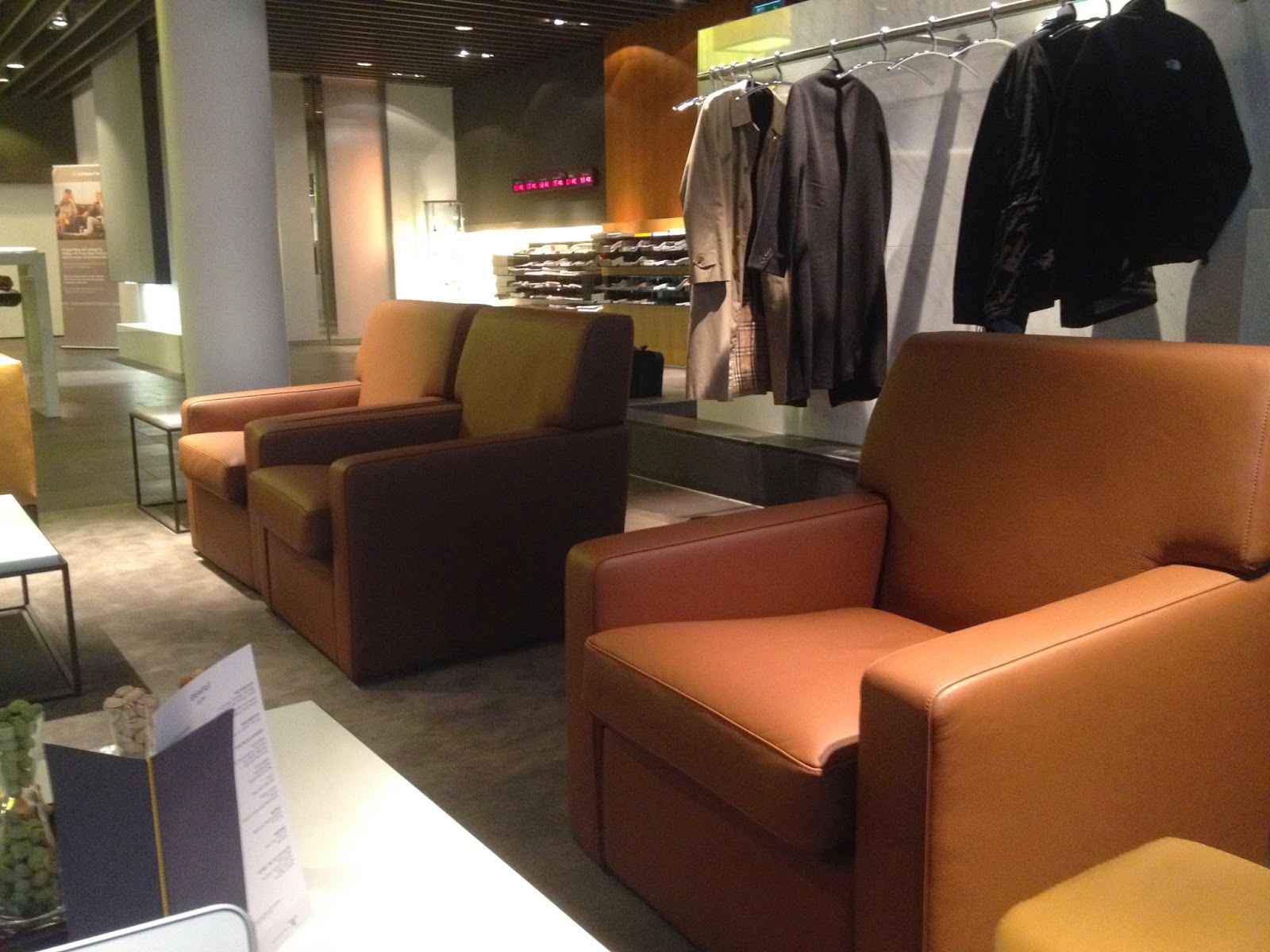 The coffee tables near the armchairs have carafes of nuts and cups of fruit. 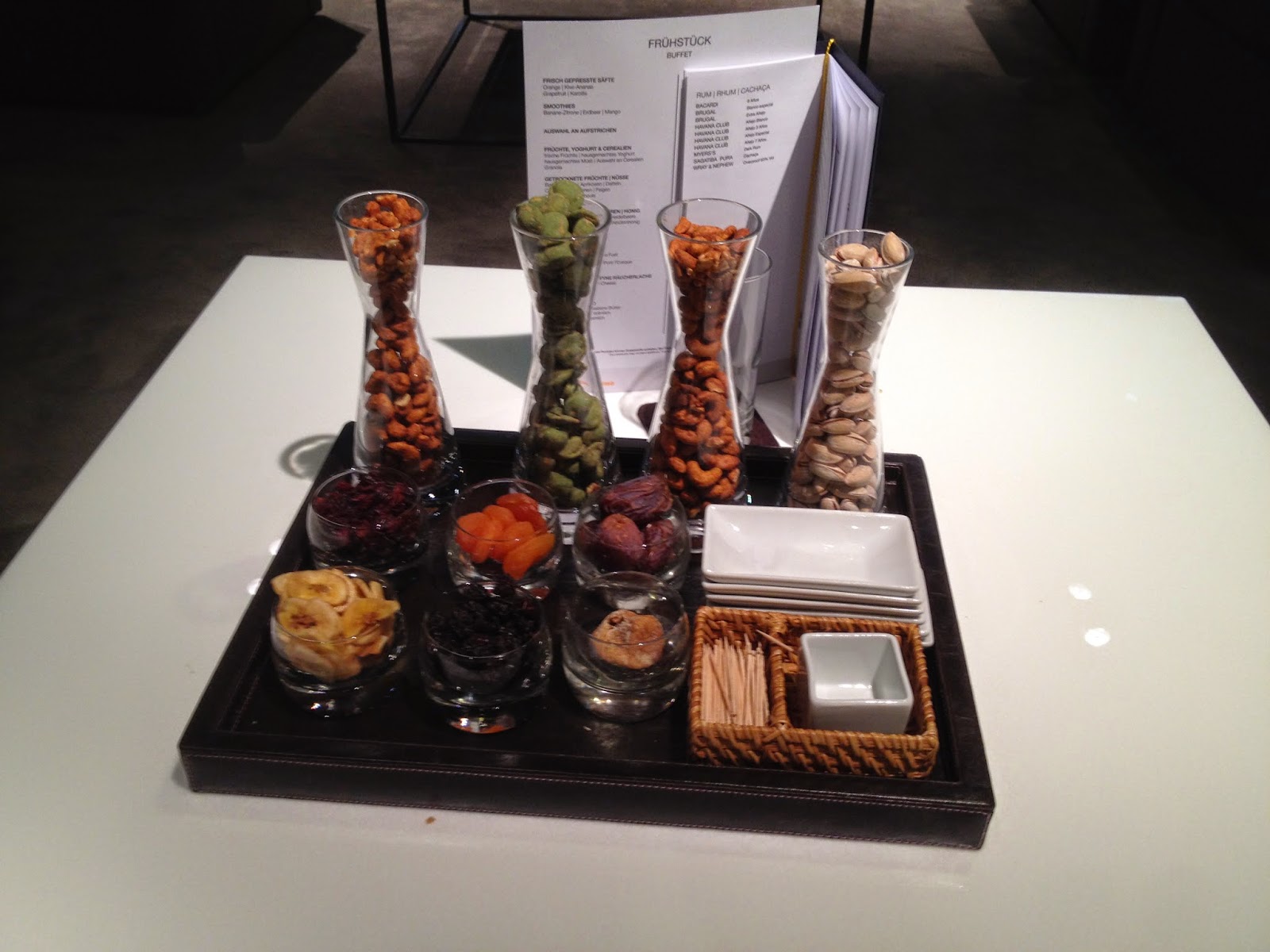 And an extensive drink menu (this is a partial selection of their whiskeys). 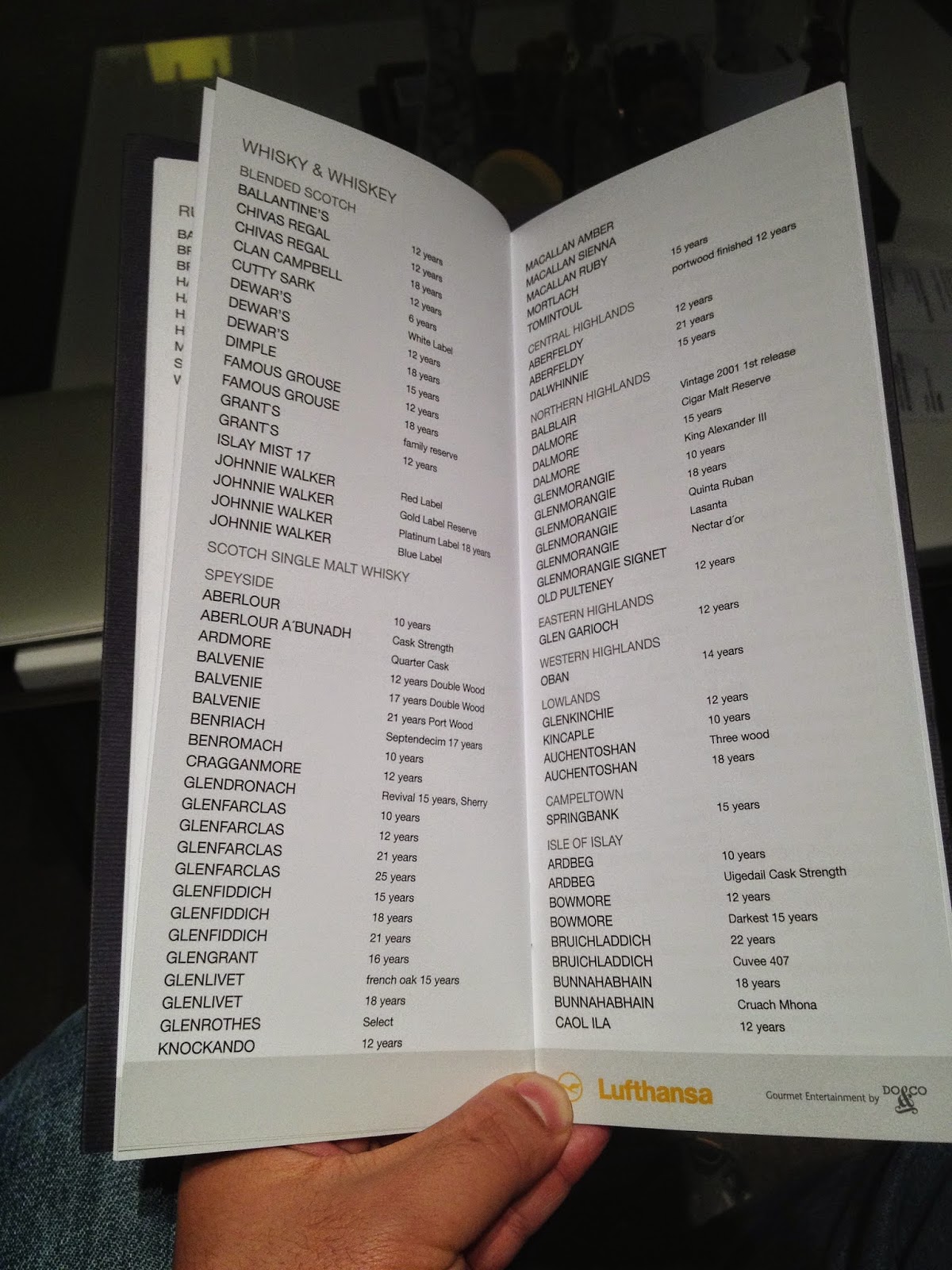 Waiters come by every few minutes to see if you want anything from the drink or food menu. The lounge staff were very efficient and skilled. They're also incredibly polyglots - they spoke to me in unaccented, fluent English; I overheard others around me order drinks and food in Italian, French, Spanish (and, of course, German).

I was pretty full from breakfast, but the mango smoothie on the menu caught my eye. 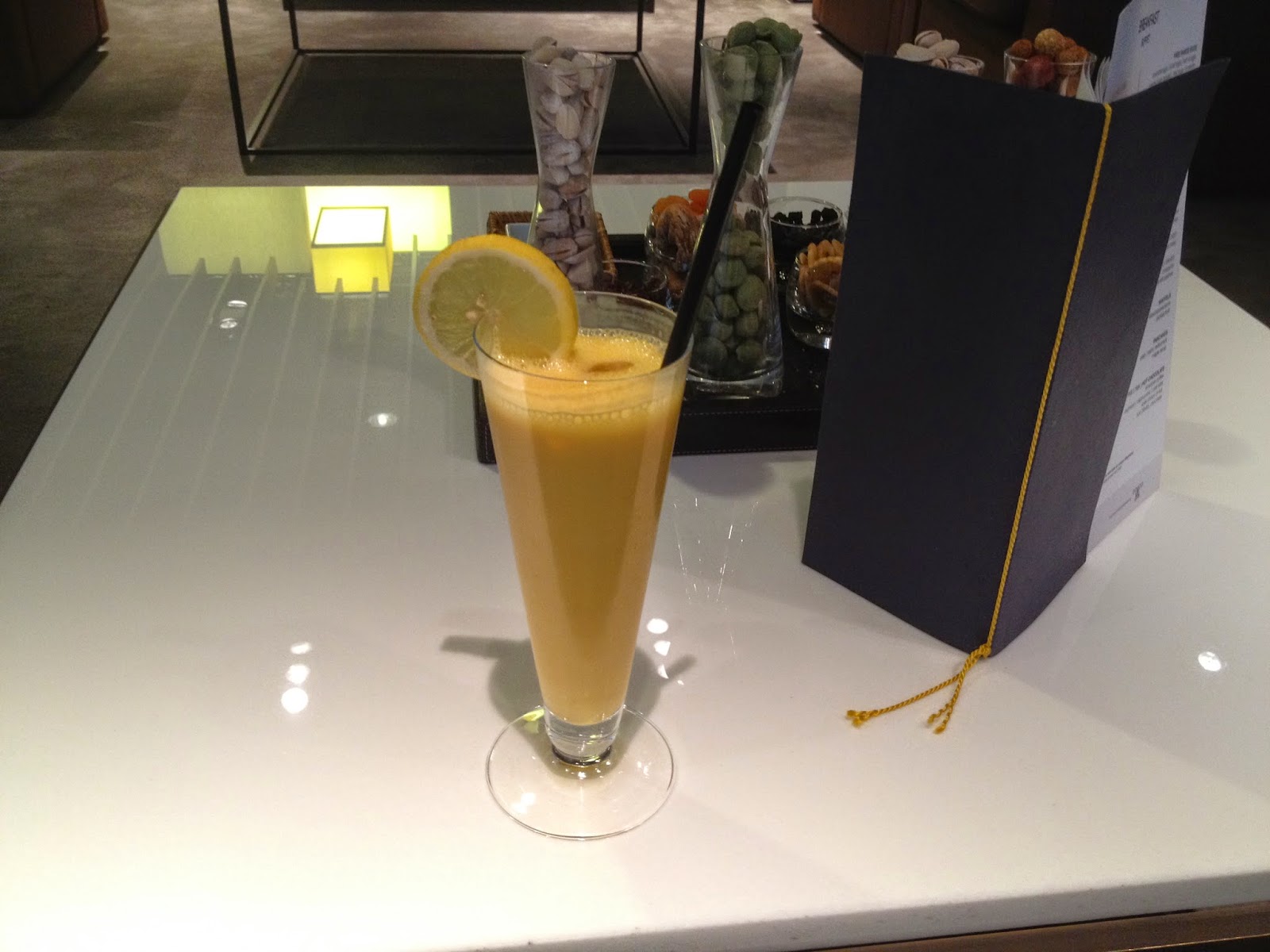 I probably wouldn't serve it with ice

I followed that up with some jasmine tea, but as a waitress disappeared behind the bar to brew it, the shower attendant told me that a bathtub room had opened up. I apologized to the waitress and told her to cancel the tea, but she said it would be no problem to bring it into the bathroom. Kind of weird, but who am I to say no? 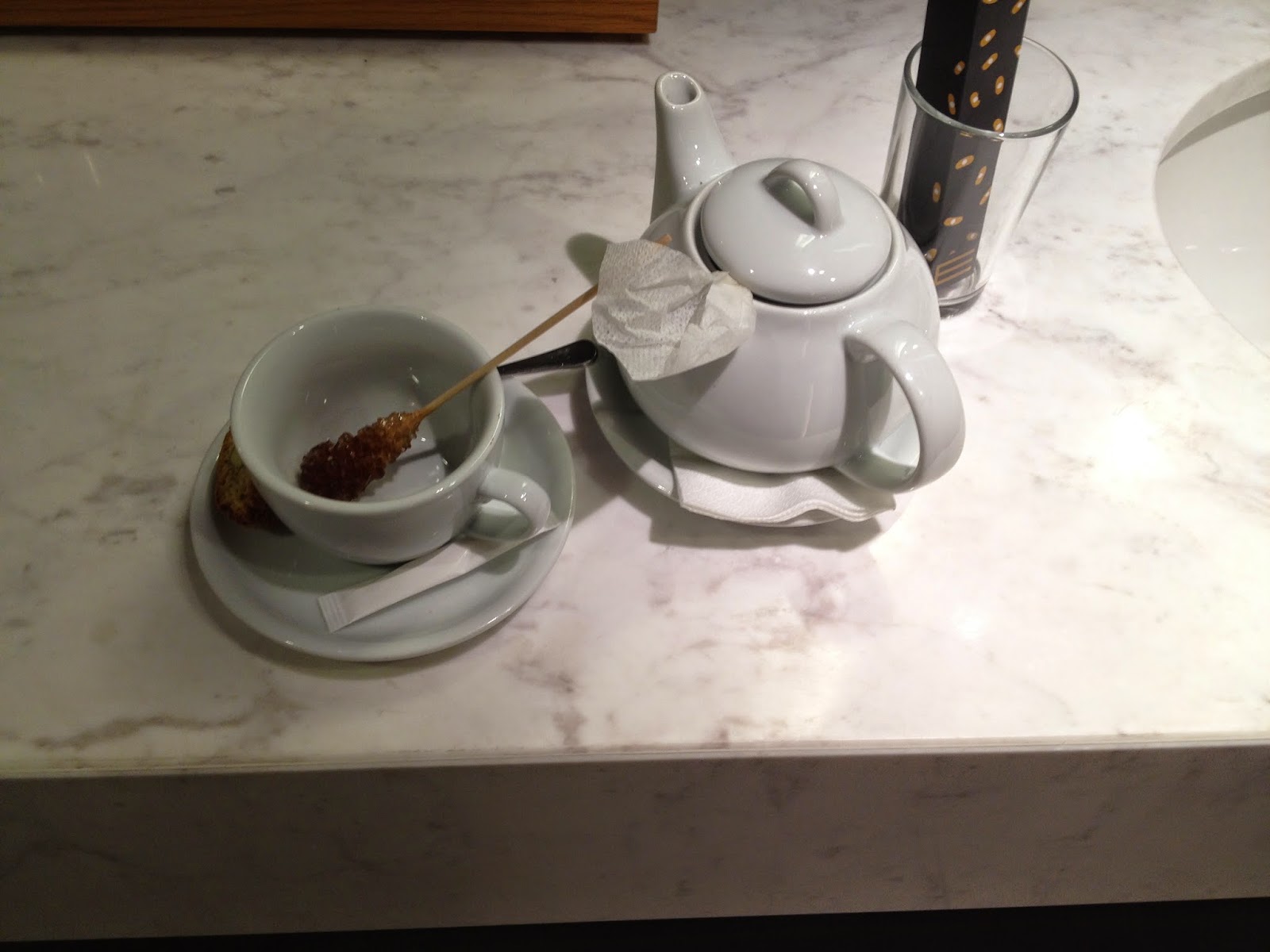 I'm not usually a bath person, but this is really, really cool. 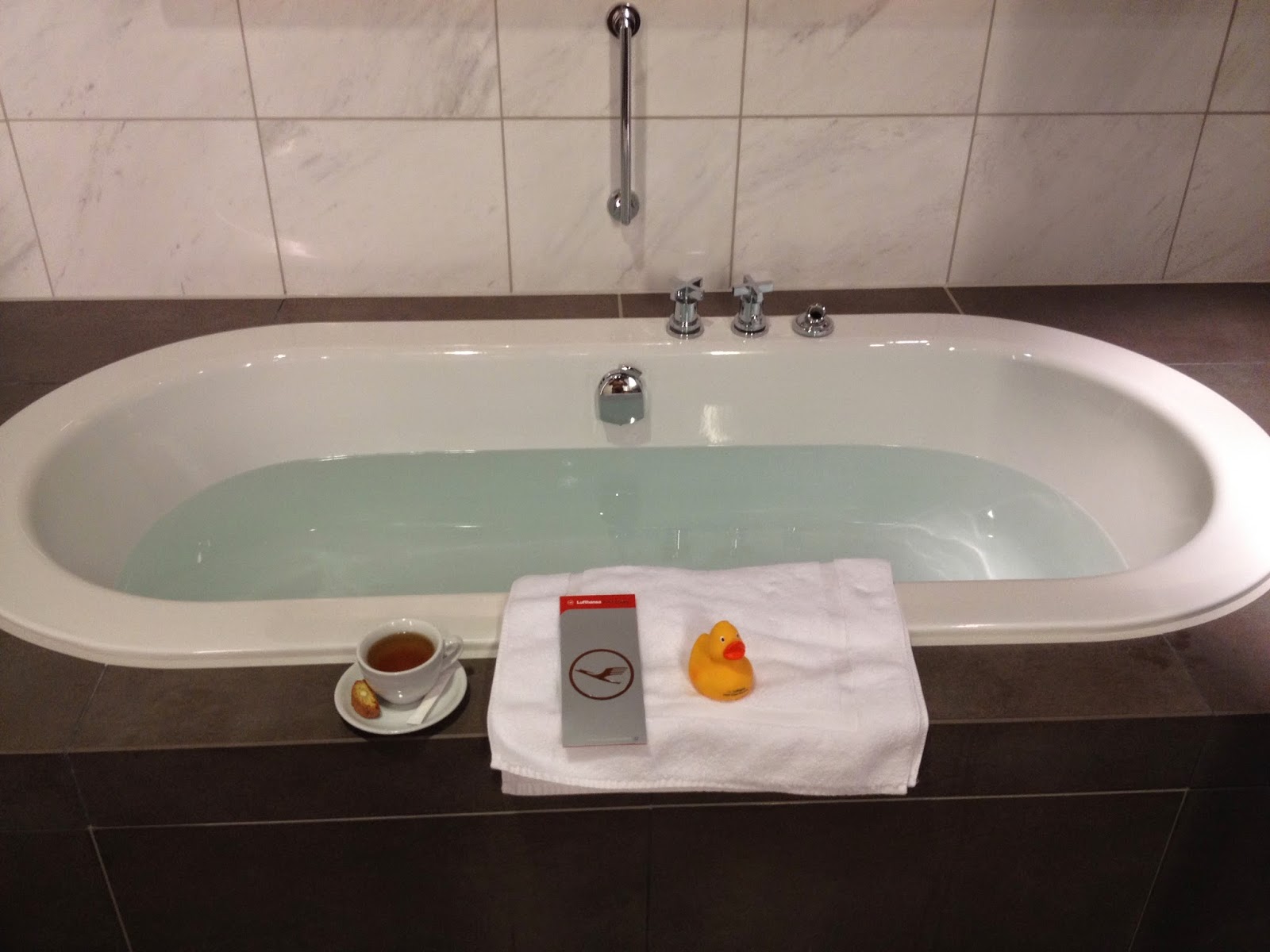 The rubber ducky (emblazoned with "Lufthansa First Class Services") is designed as a take-home souvenir that allows you to brag about being a first-class passenger without having to say anything. Understated and ostentatious (much like Lufthansa First Class generally).

Between the buffet and the shower rooms, there's an enclosed cigar lounge with a wide variety of cigars. There was some rich sheik-looking fellow inside who looked like he didn't want to be photographed, so I surreptitiously snuck this (horrible) picture. 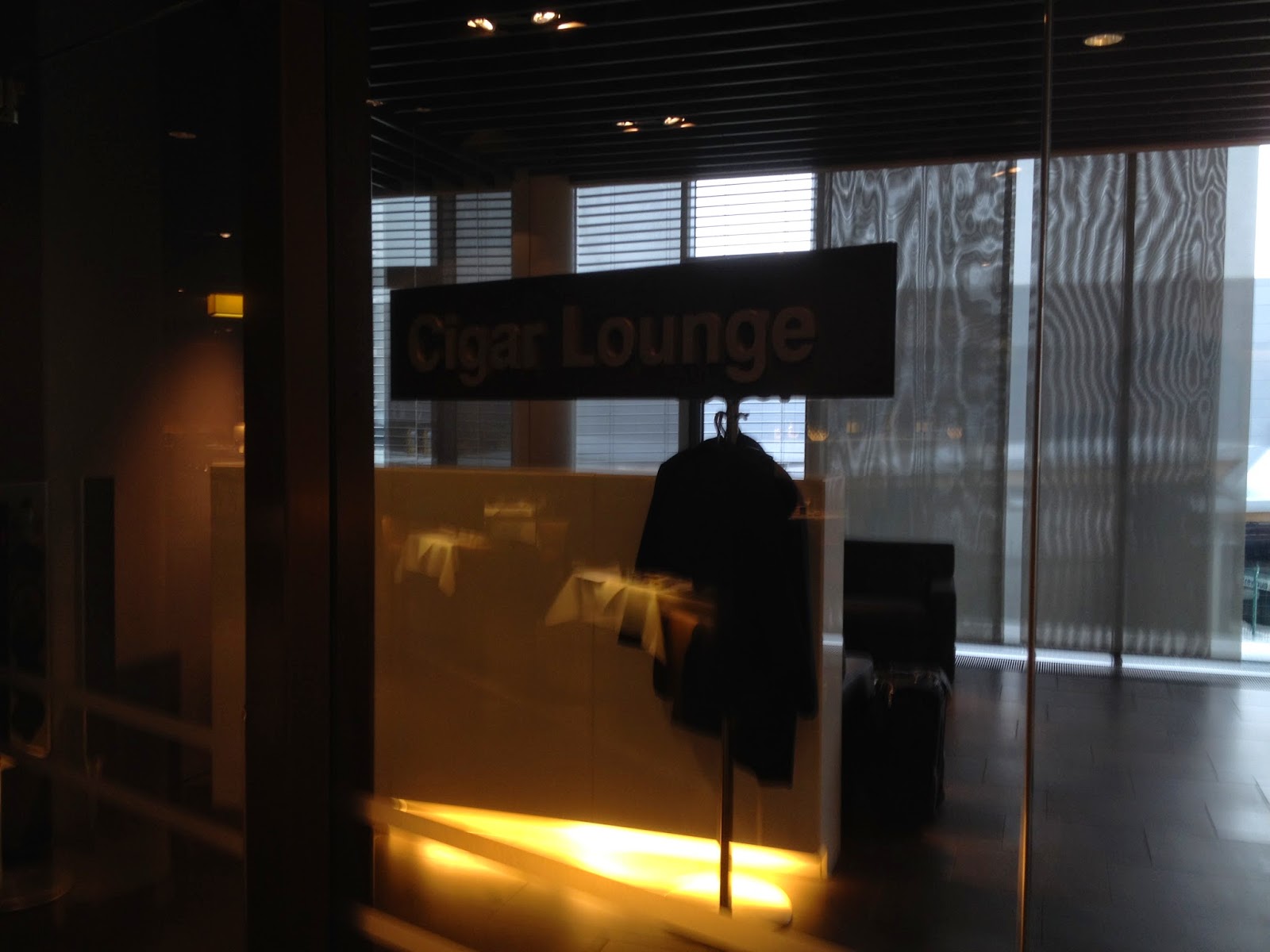 As I walked back to my armchair, my check-in agent told me it was time to head to my plane. He accompanied me in an elevator down to the first floor, where the FCT's dedicated customs agent handed me my passport and wished me a pleasant journey. And with that, my stay at the FCT came to a sad end.

Except it wasn't quite over. The most unique part of the FCT experience is the chauffeured car ride from the FCT directly to your airplane in a Mercedes or Porsche. My ride to the Vancouver-bound 747-400 was in a sleek Porsche Cayenne. 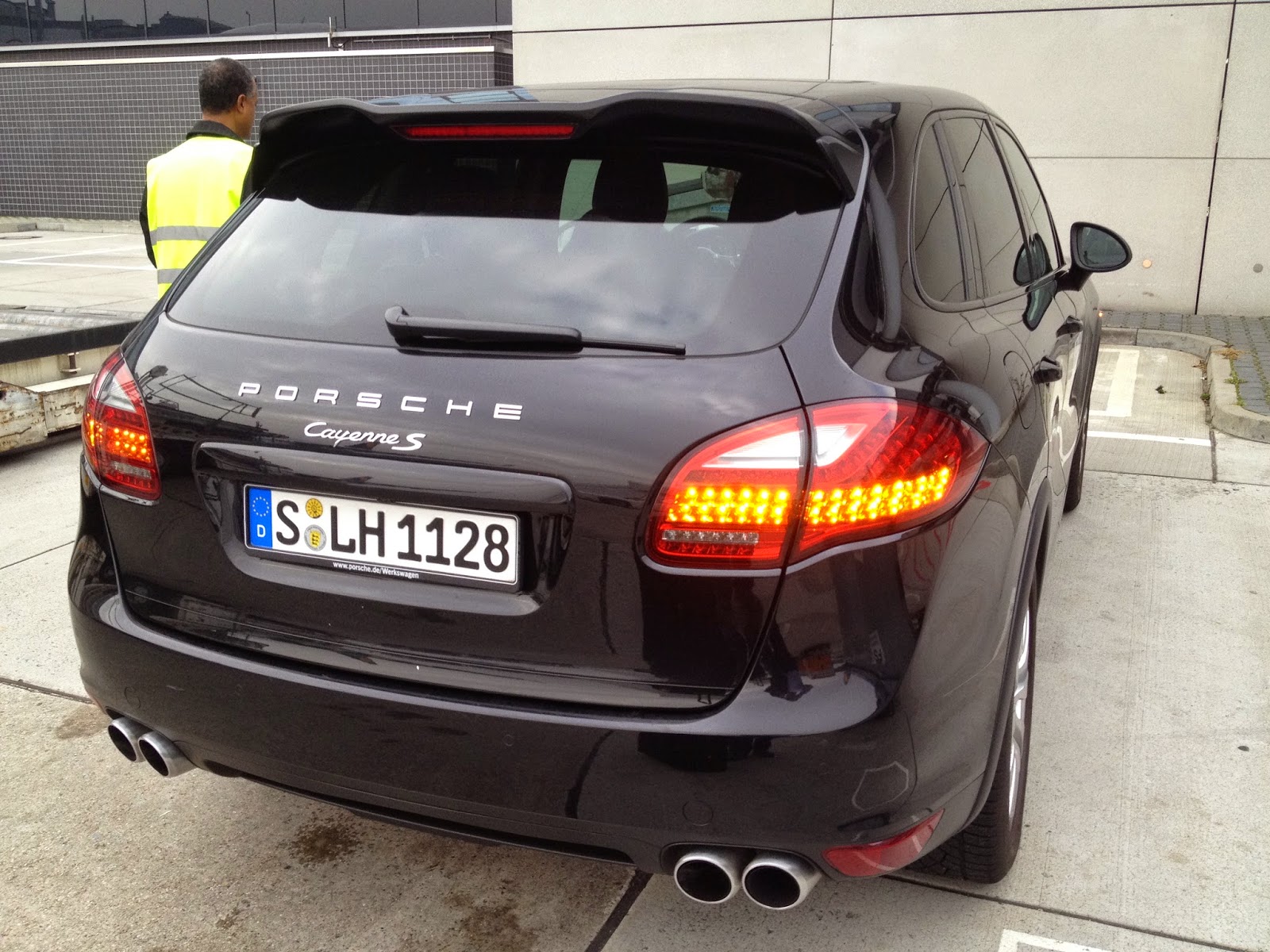 The chauffeur service is the main differentiator between the FCT and the "ordinary" First Class Lounges in the terminal (from which you're expected to walk to your gate like some sort of peasant).

The Boeing 747-400 looks pretty impressive when you're boarding it from the gate, but from the ground level, it's truly majestic. 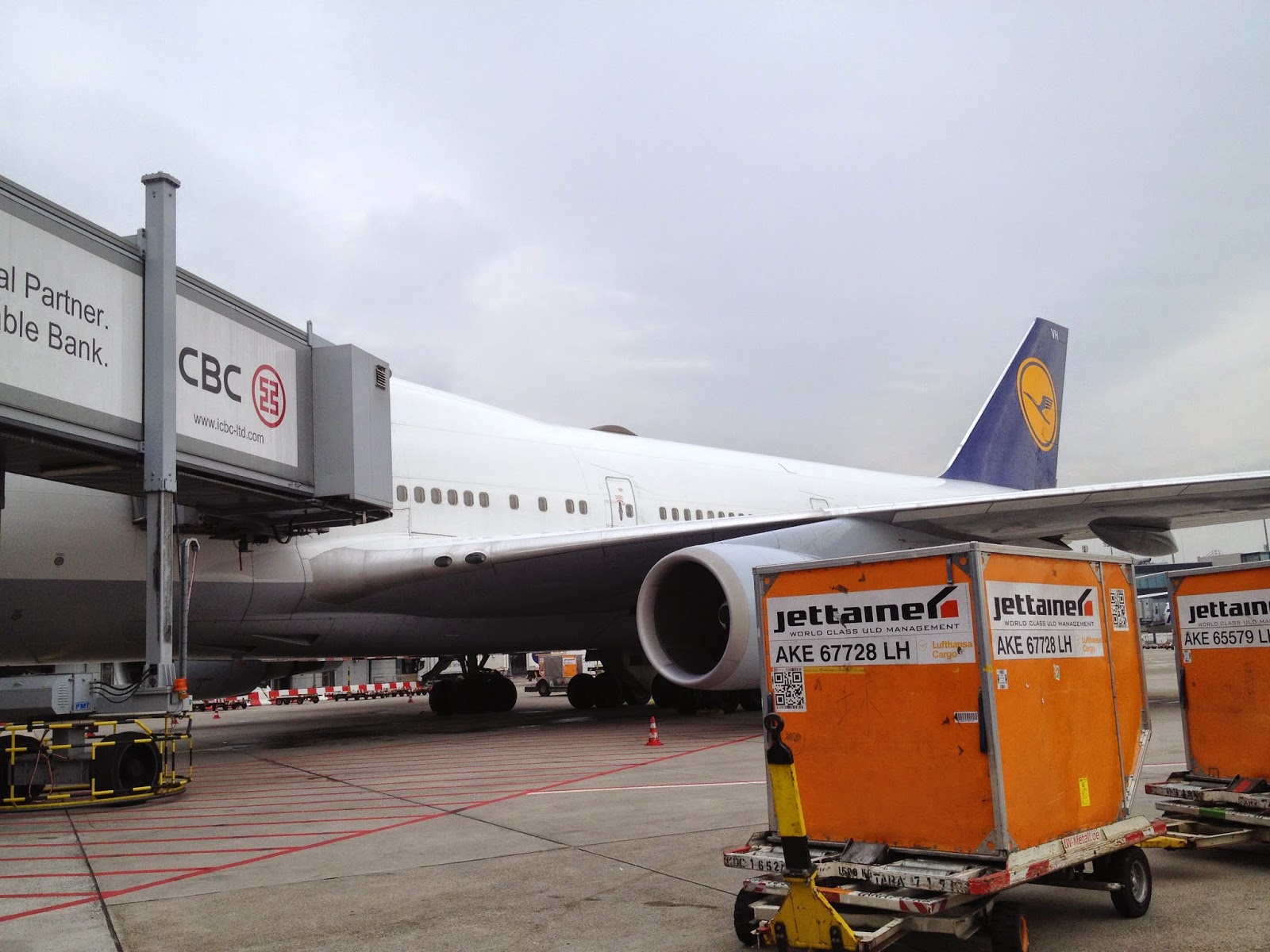 Pulling up next to the plane


The driver took my bag and accompanied up an elevator to the boarding door, where he introduced me to the purser and wished me a pleasant flight.

Conclusion
The FCT experience makes flying a real pleasure. Nothing is overly showy (well, other than the luxury car transfer), but everything is done to make the flying experience as painless as possible. Check-in and security are almost instantaneous; the food and beverage selection are restaurant-quality; and the multi-lingual lounge staff seem able to make all their well-heeled guests happy. 10/10; would do again.