The only Hyatt in the Frankfurt area is in Mainz, a suburb city in its own right about 15 miles west of the airport. The hotel's website tells me that a cab is about 60 Euro, but that I could take the S-Bahn suburban rail line from the airport for about 7 Euro. So I decided to try the adventurous route.

There are plenty of signs in the airport terminal that direct you to the airport S-Bahn station, which is just underneath the terminal. But once you're there, you're sort of on your own. 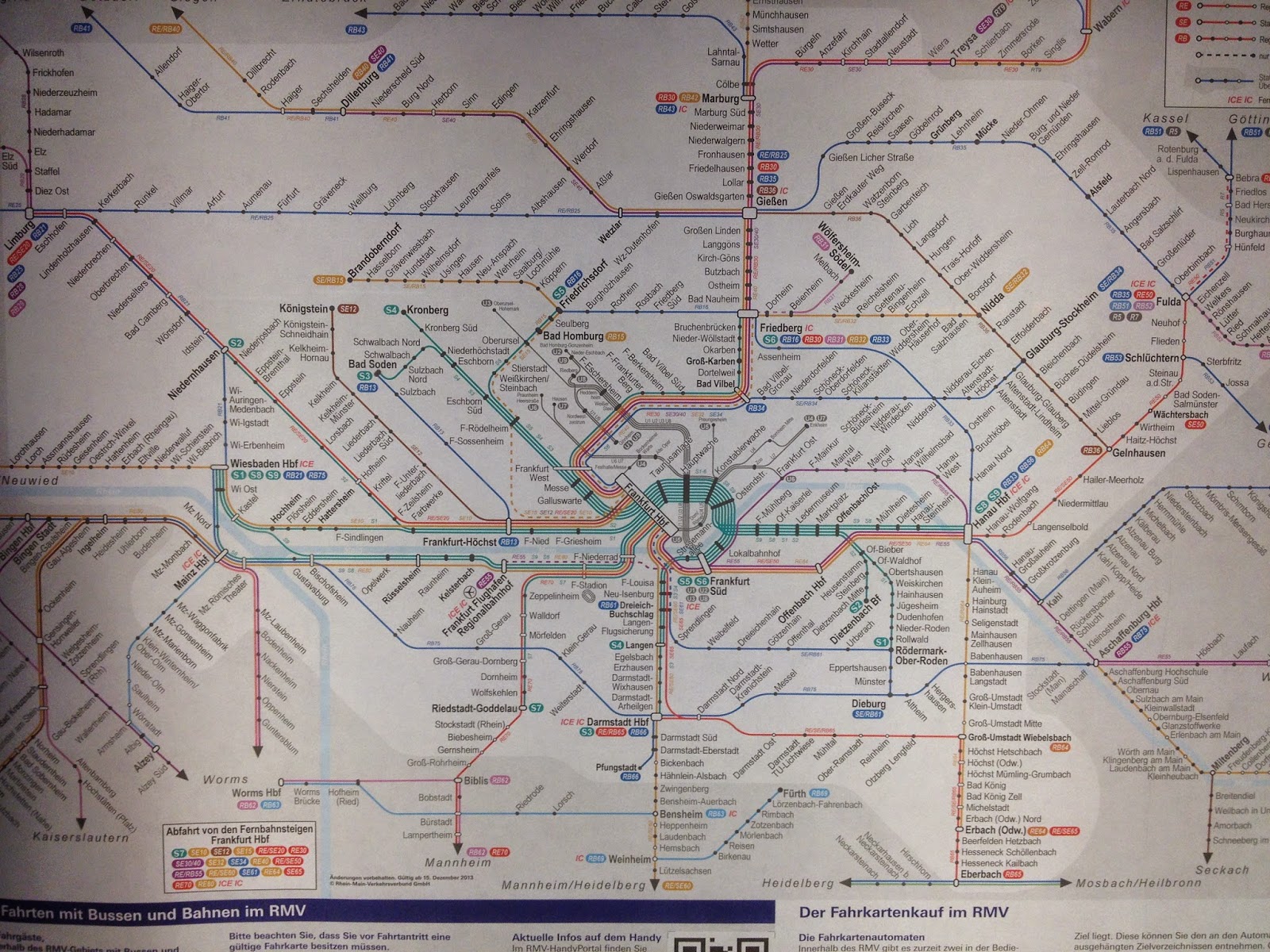 That map is the Frankfurt local train network. It makes the New York subway look like a monorail. But I knew from the hotel's website that I should take line S8 toward Wiesbaden and exit at the Mainz Röisches Theater stop. I found it on the map (just southwest of the river bend. The airport's on there too). 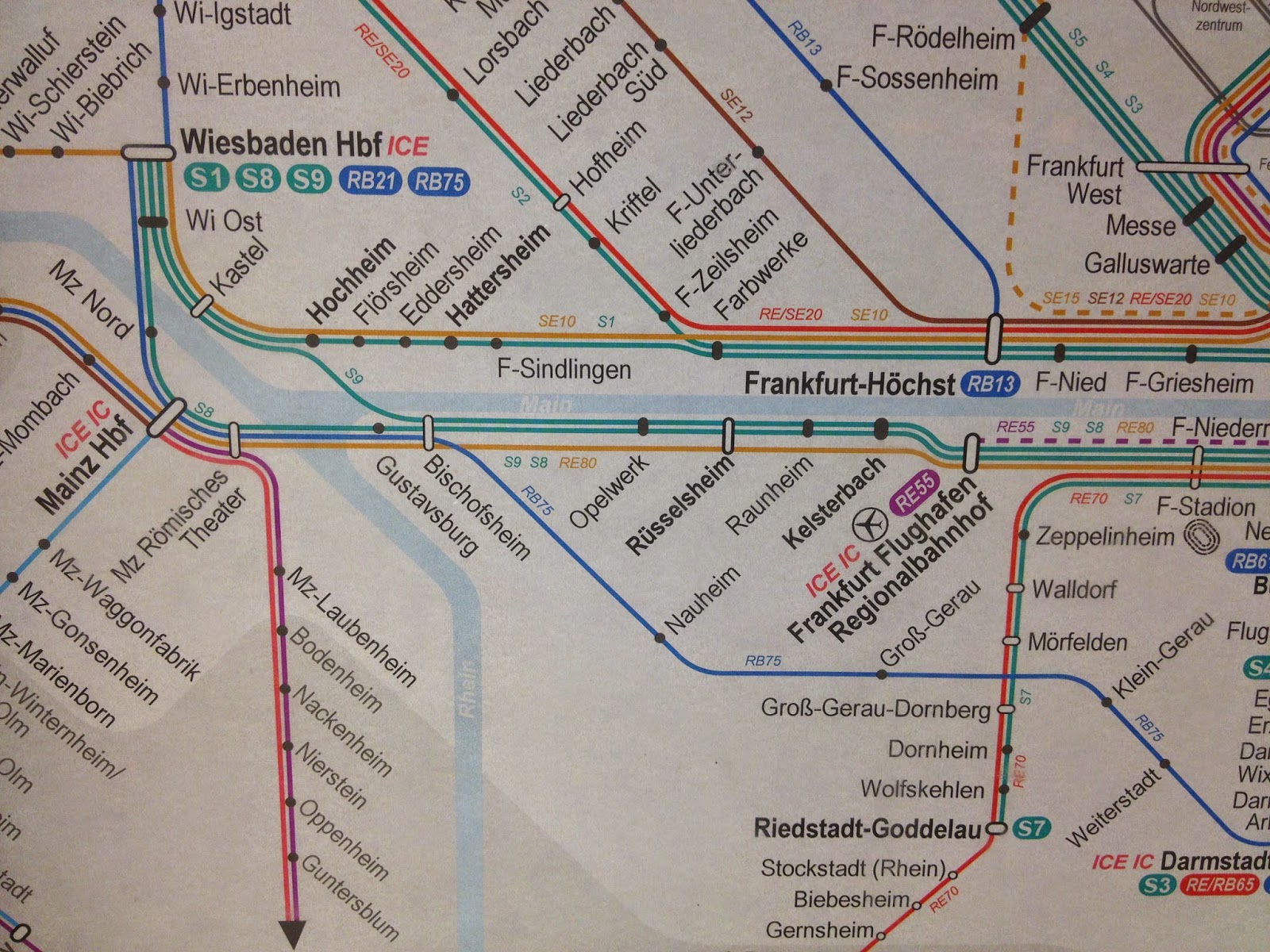 The relevant part of the map

There isn't a ticket agent in the station; you have to buy your tickets from a machine. Thankfully, you can press a Union Jack icon and get instructions in English. I pressed the button for Destination: Mainz. The machine asked me: "via Rüsselsheim" or "via Frankfurt Hbf."

After consulting the oracular map, I figured out that going through Frankfurt Hauptbahnhof was a big detour. The fare through Rüsselsheim (the correct route) was only 4.35 Euro. None of my credit cards worked on the machine, so I paid cash. I had to wait about 20 minutes for my train to arrive. 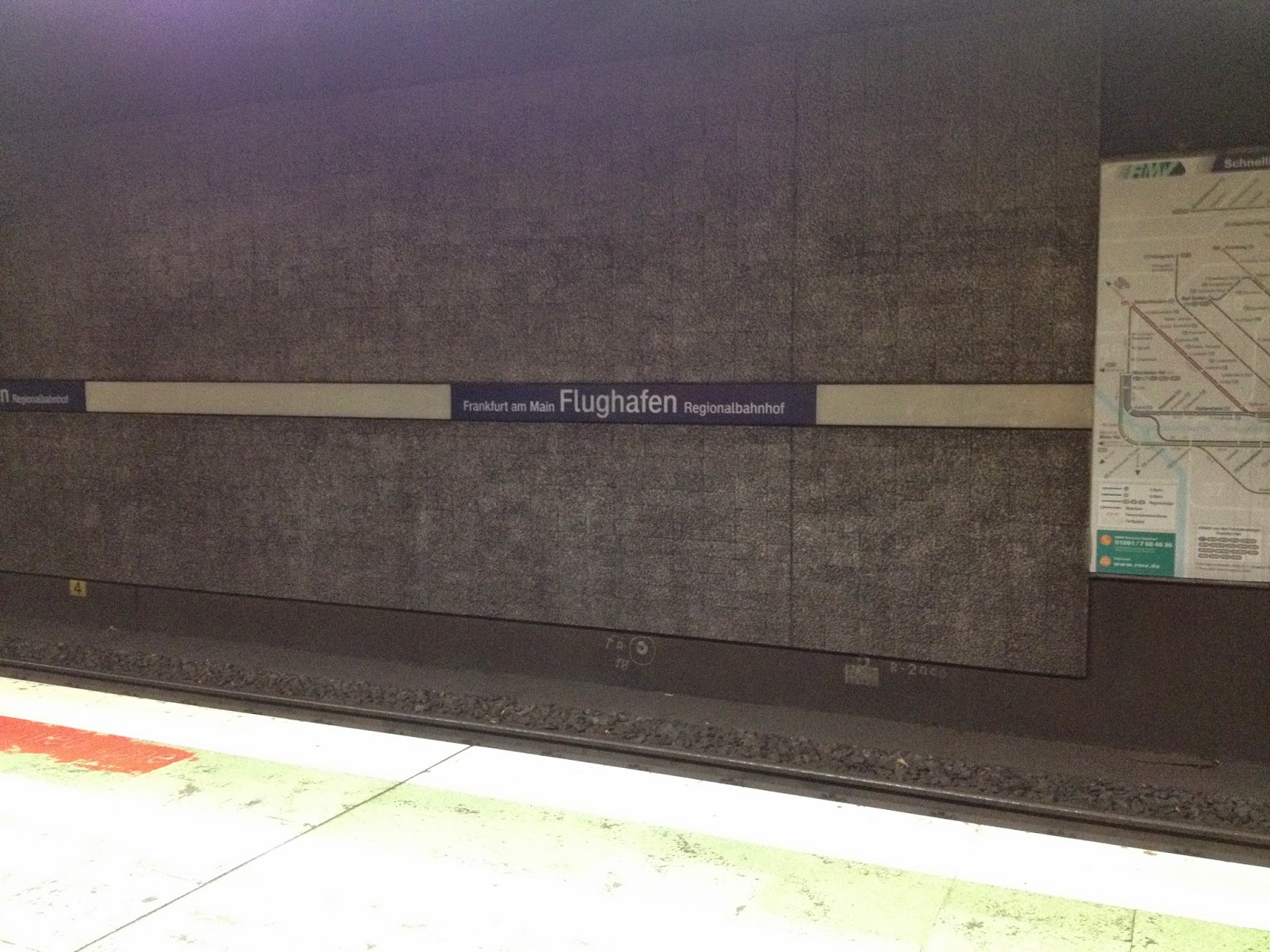 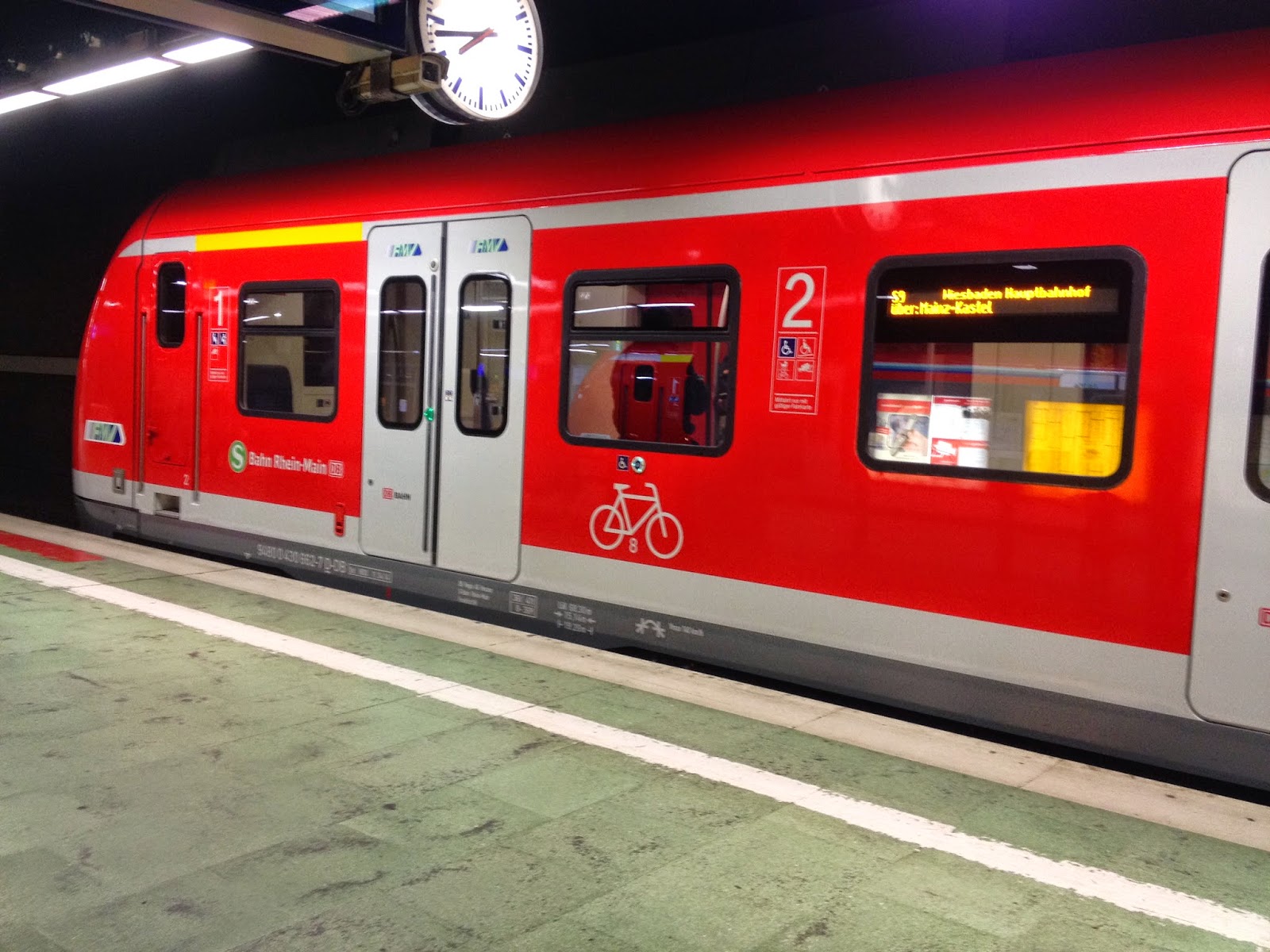 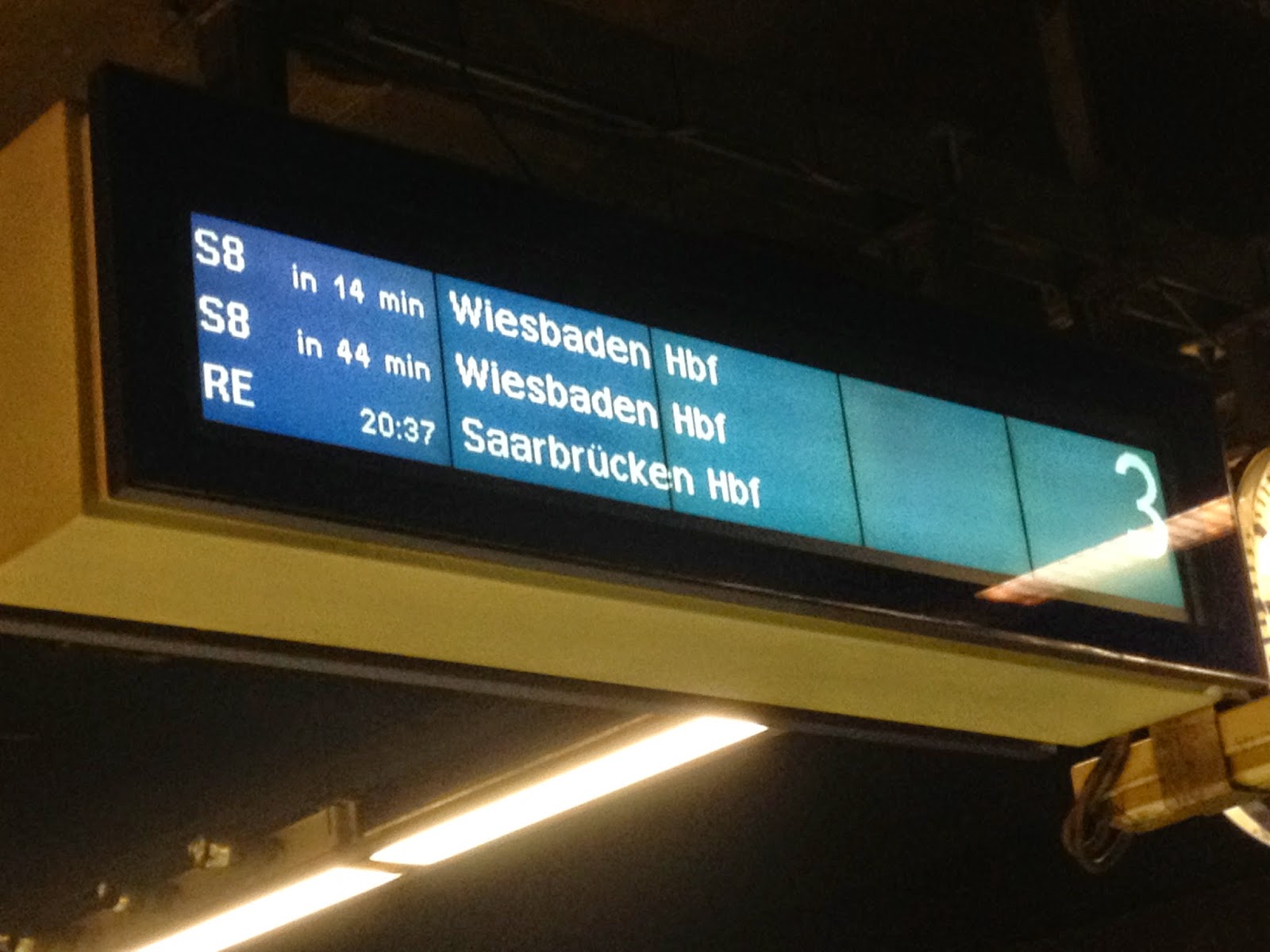 It's a good thing I printed Google Maps directions from the Mainz Röisches Theater station to the Hyatt; there aren't signs, and you can't see the hotel from the station. The hotel's website claims it's a 3-minute walk; it's more like 10 minutes. 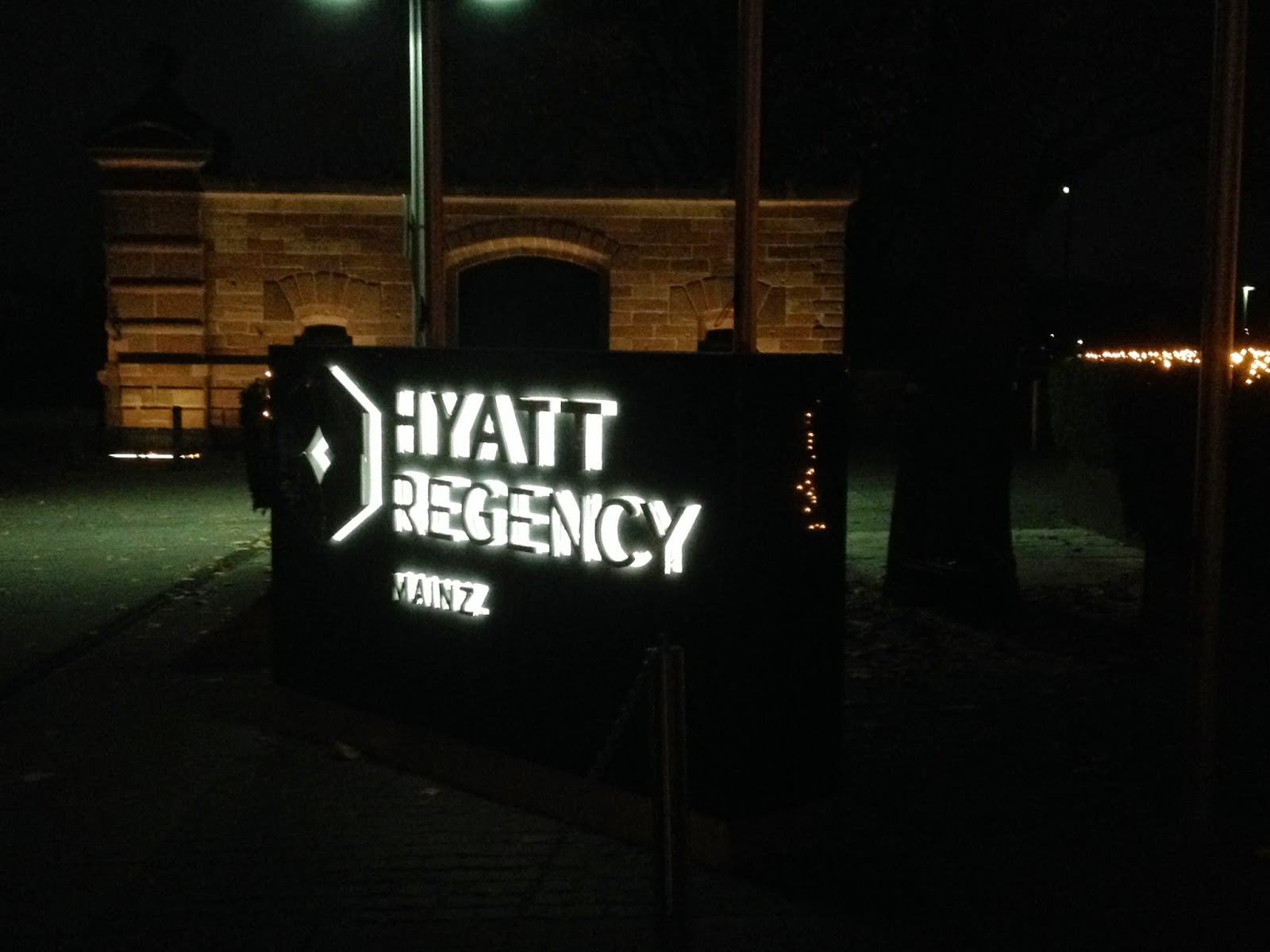 I was checked in by a Really Really Really Ridiculously Good-Looking male model who spoke perfect American English. He explained my Diamond benefits and asked whether I'd like the 1,000-point check-in bonus or a food and beverage amenity.

Out of curiosity, I asked what the food and beverage amenity was, he said: "Well, what do you want? We can basically do anything." But I was full from my flight and the Regency Club (with free drinks) was still open, so I took the points - I think I disappointed him. Sorry, Hansel. Hansel offered to show me up to my room, but I figured I could get there myself.

My room was on the Regency Club floor with a view of the Rhein river. (In English, it's called the Rhine - I'm not sure why we don't defer to the Germans when most of the river is in German-speaking countries). 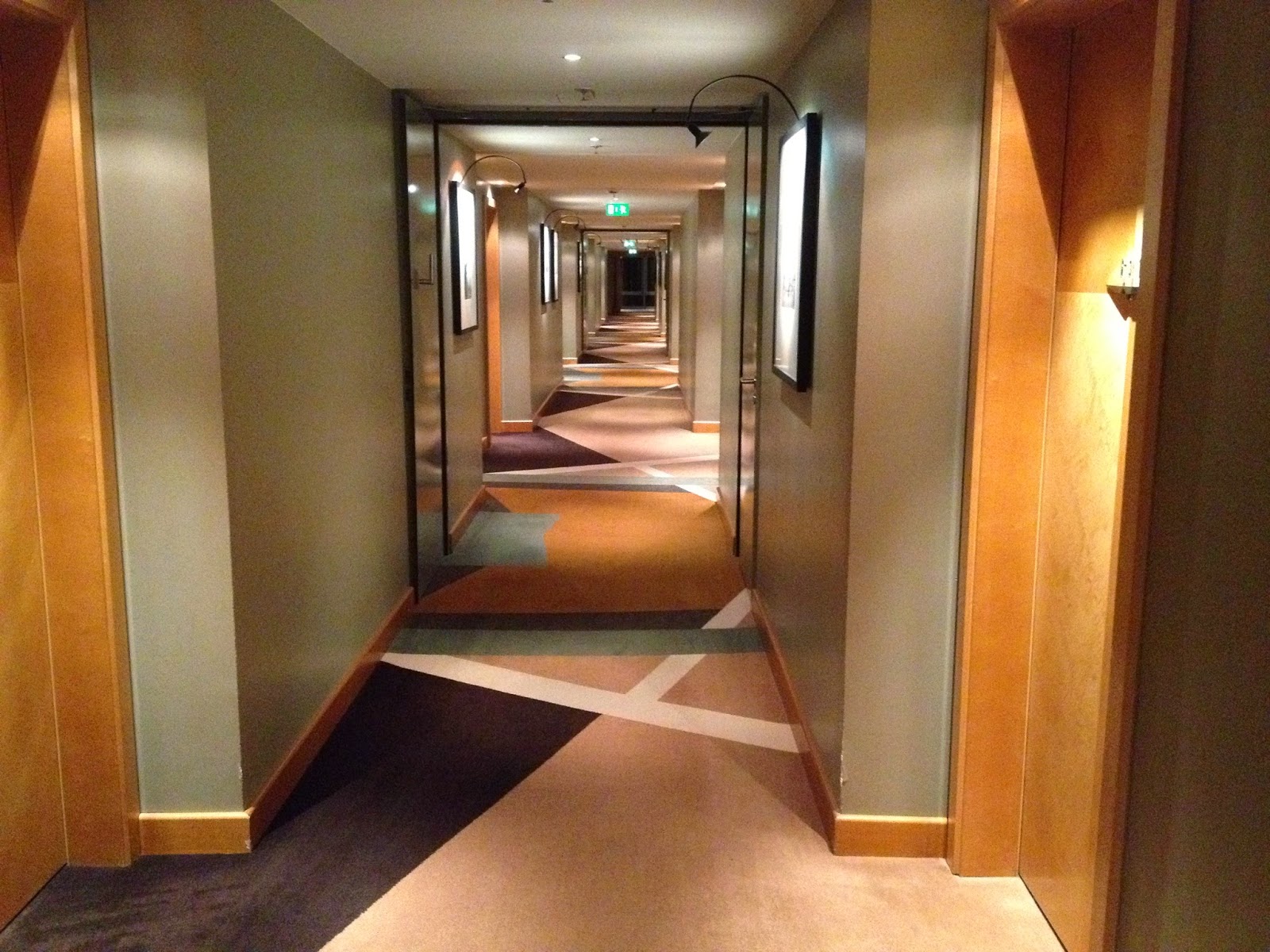 The bedroom portion was pretty standard. There's a bed. There's a desk. King in the castle - I have a chair. 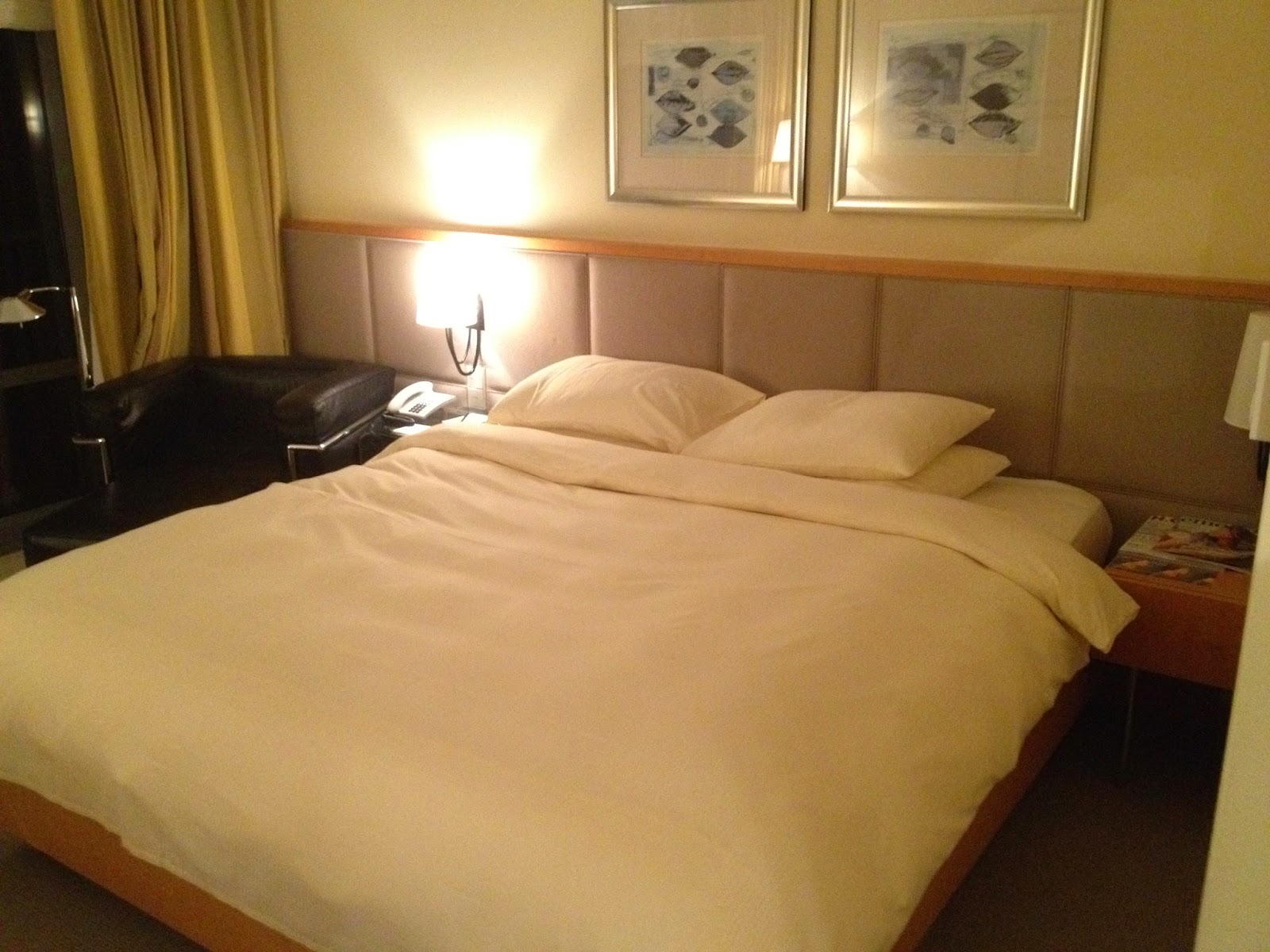 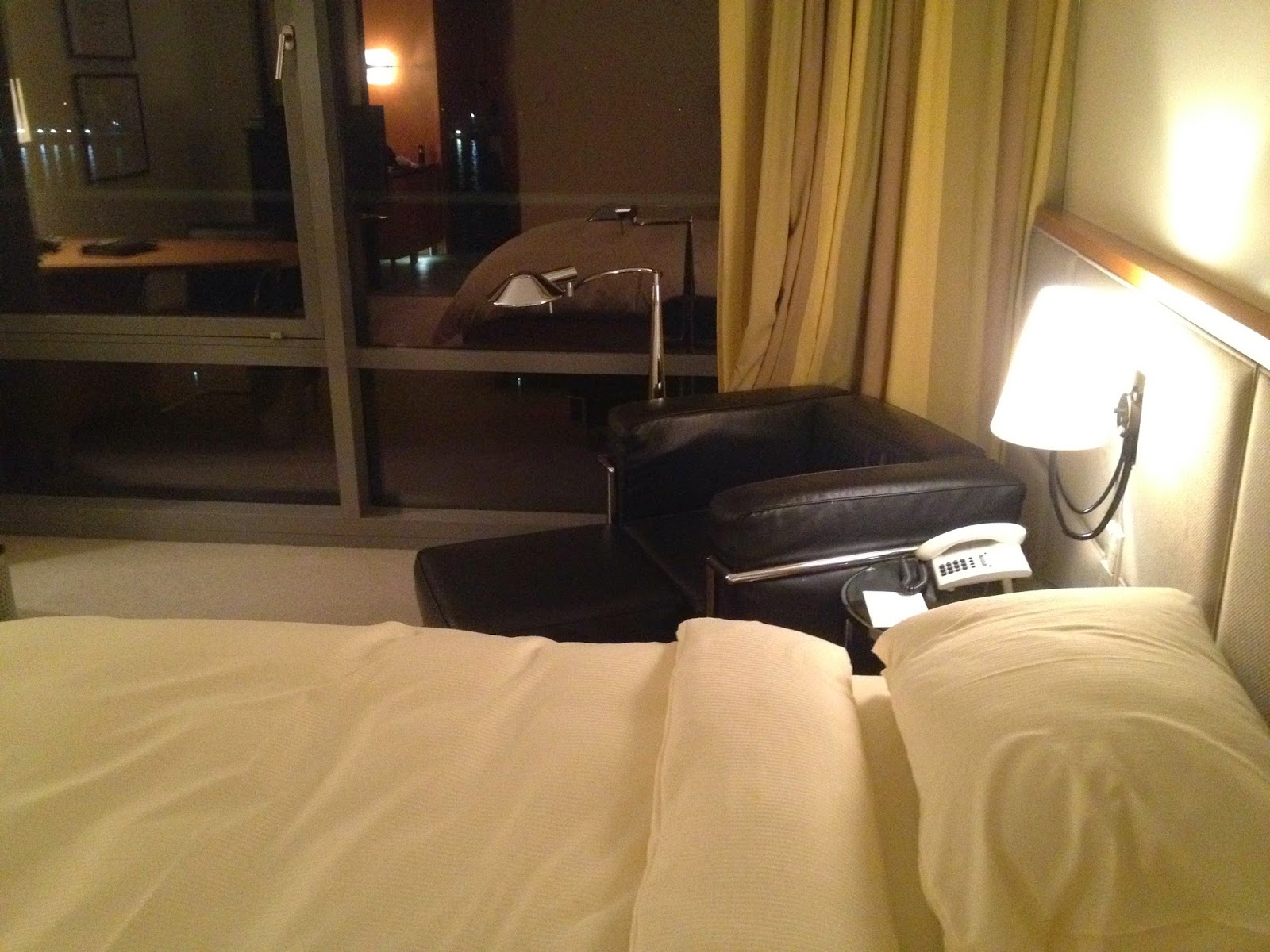 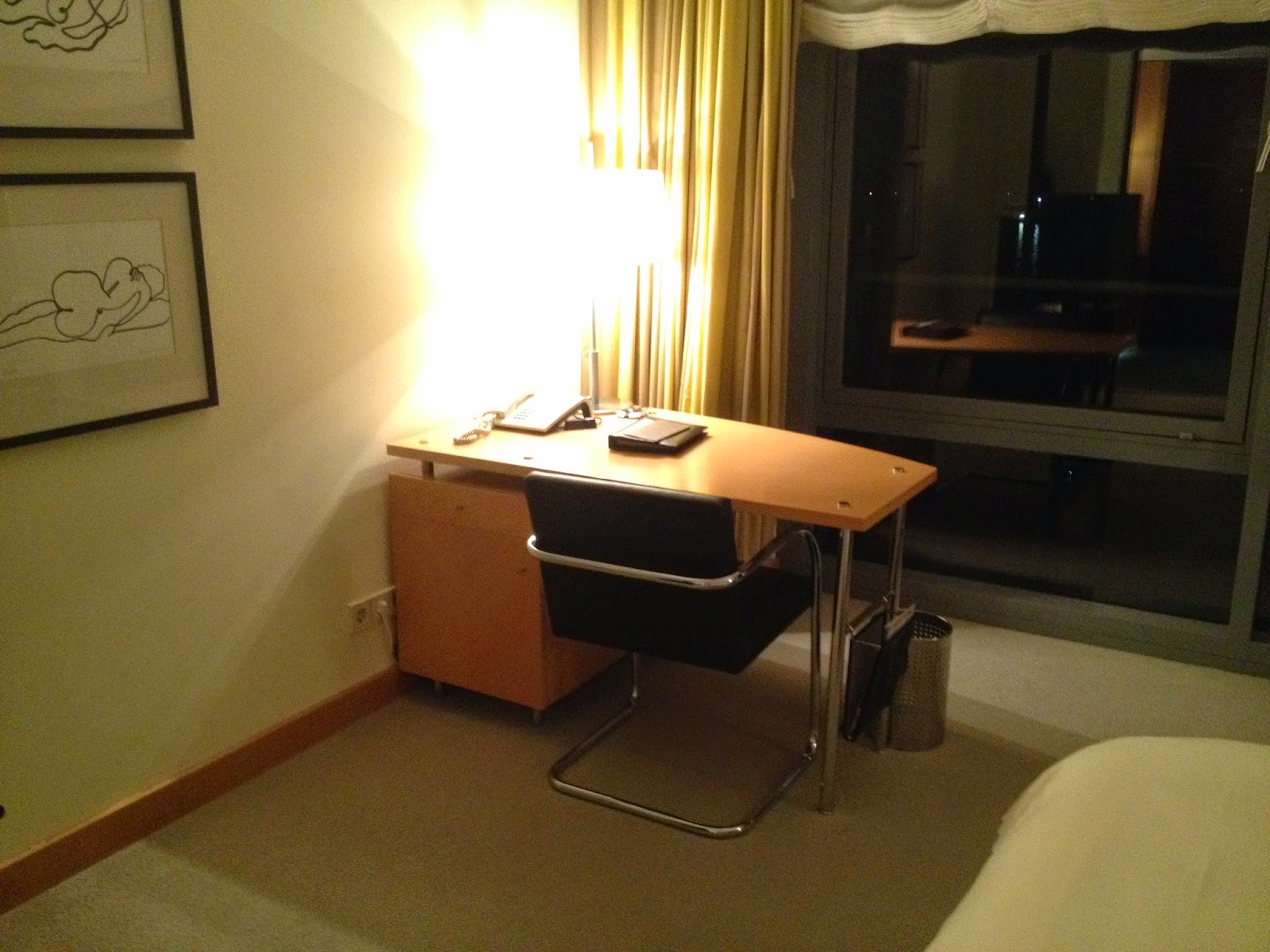 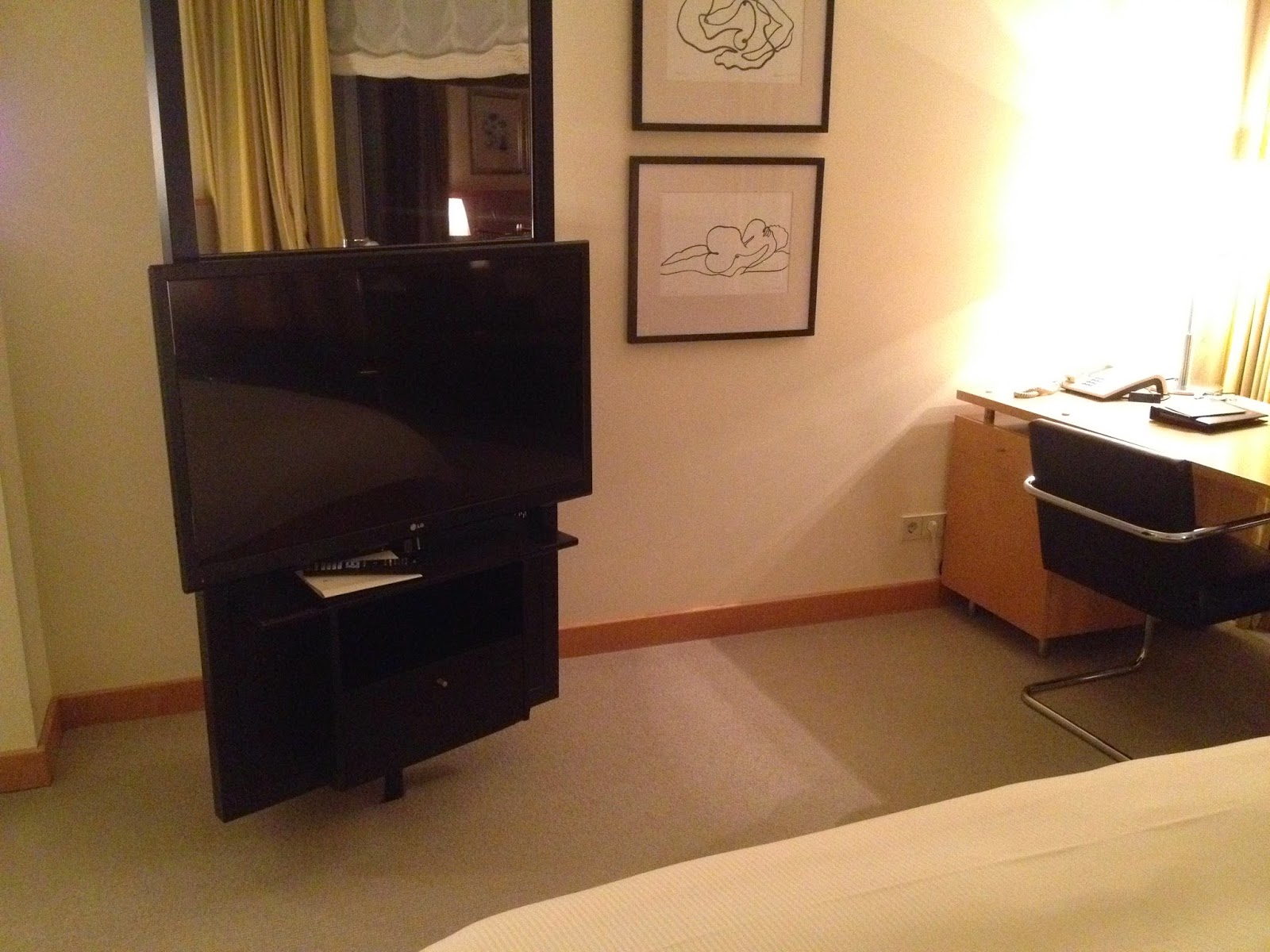 The bathroom is the highlight of the room - it's quite spacious. 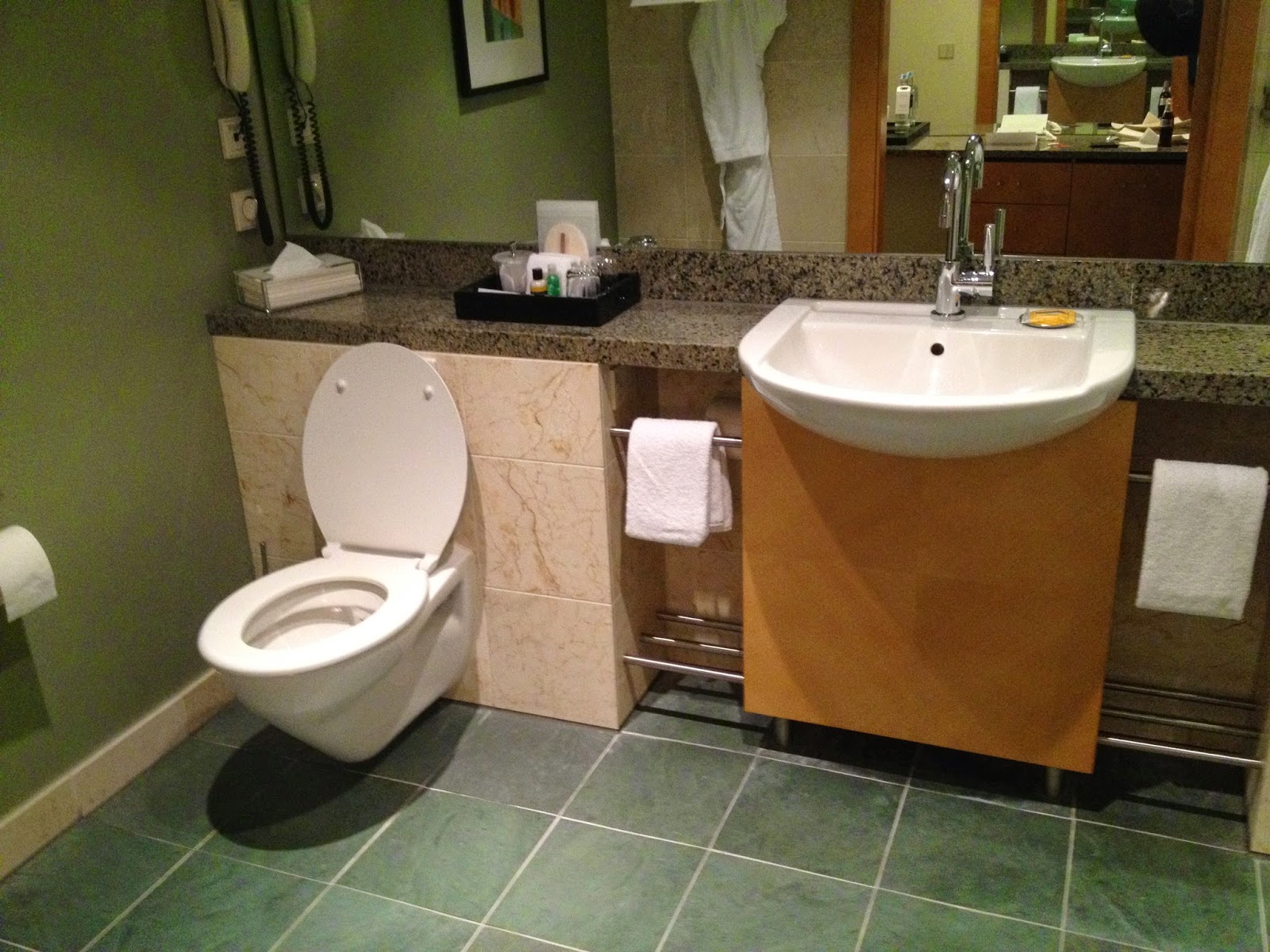 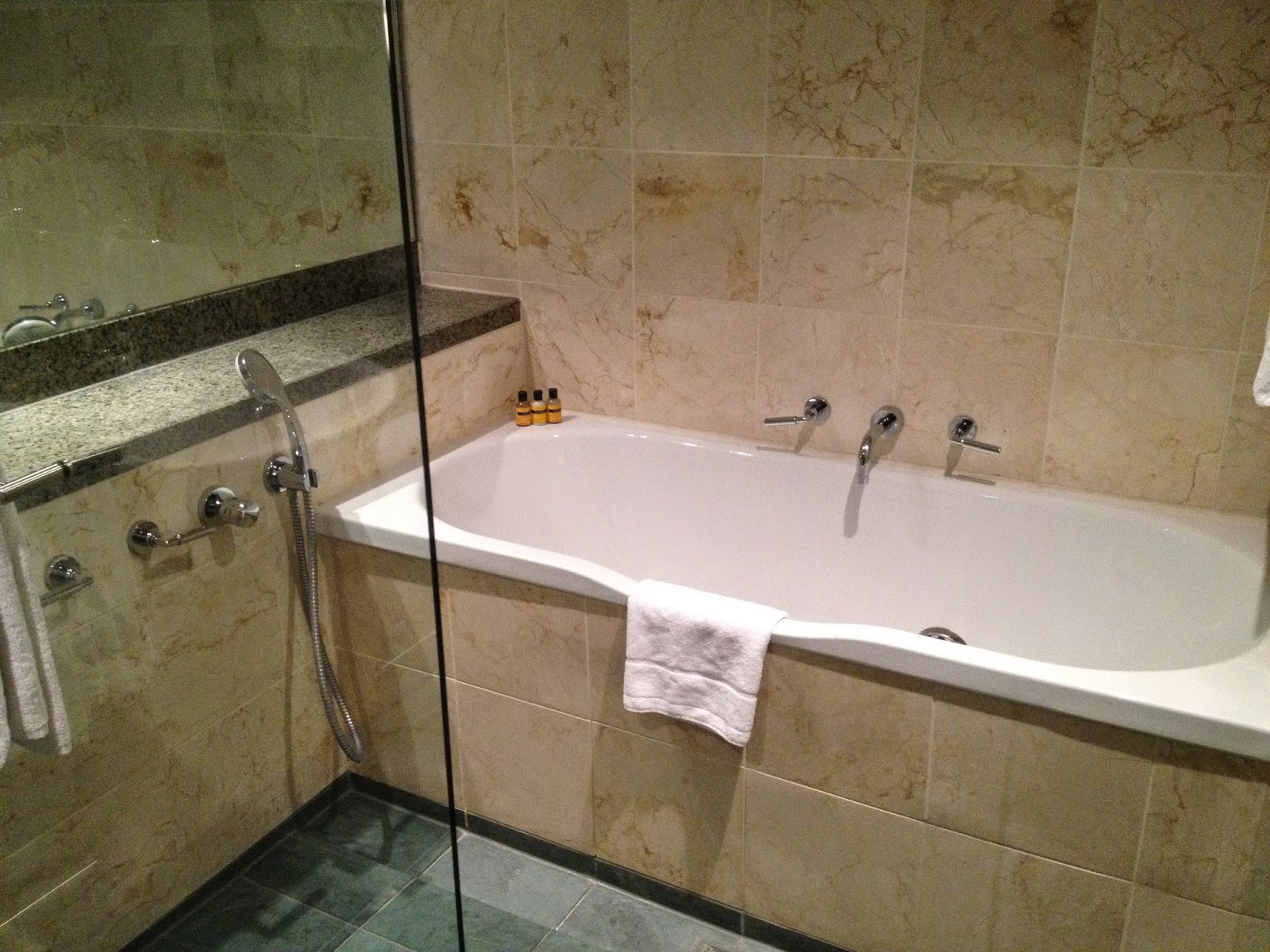 There was a complimentary bottle of mineral water in the room. I went next door to the Regency Club and grabbed a Sprite. There wasn't any food available, but we were long past the standard dinner hour. 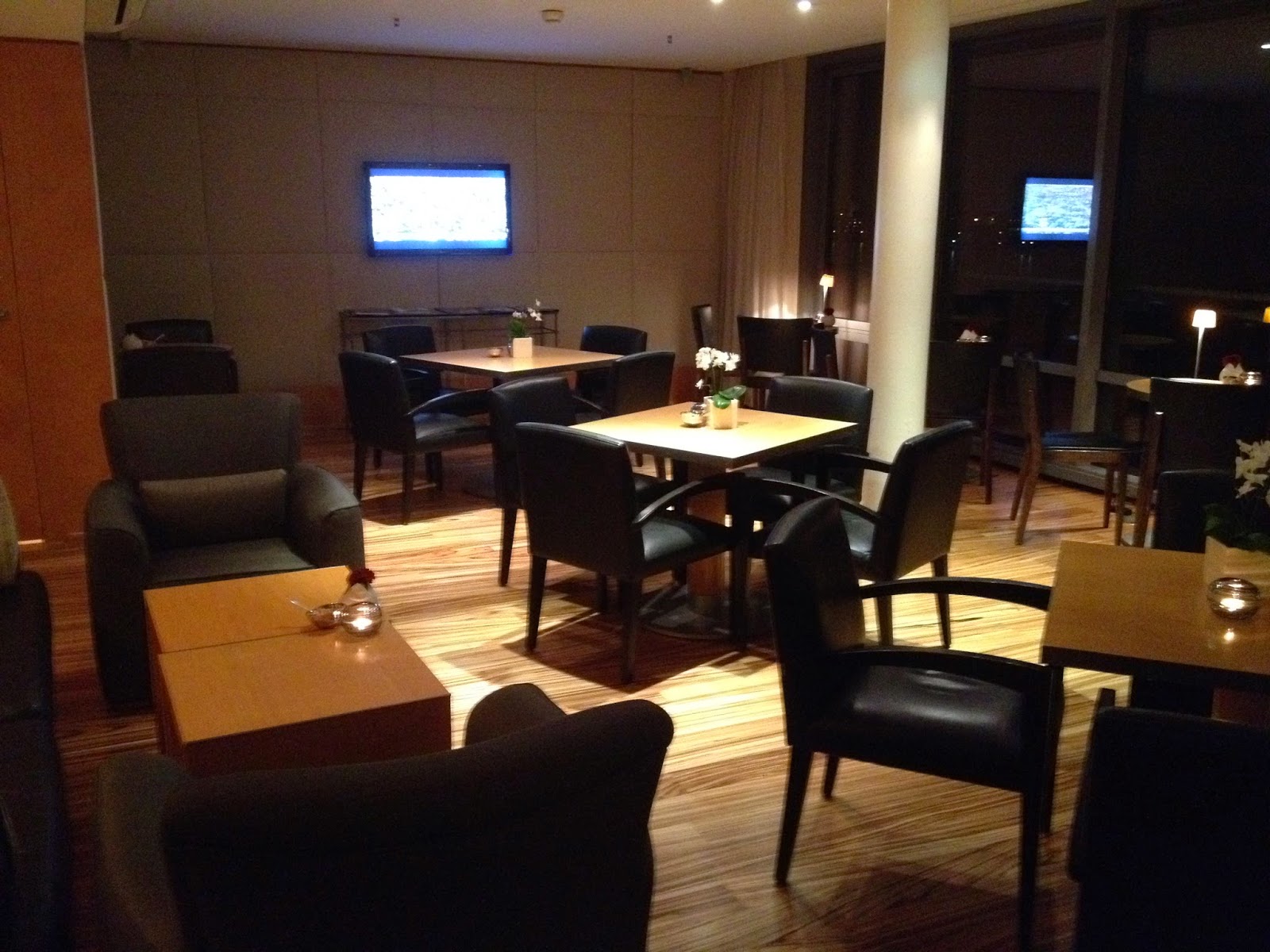 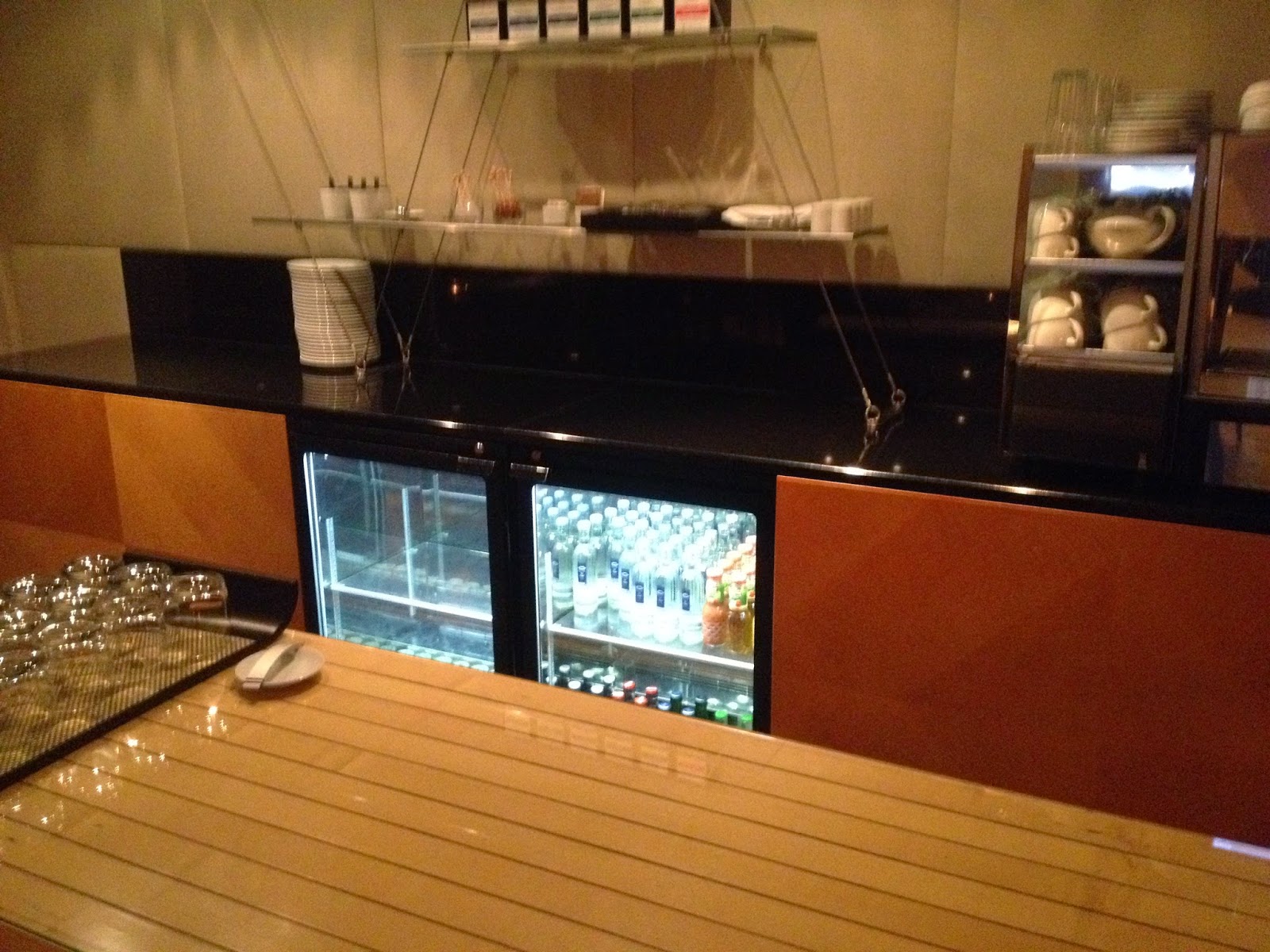 
The next morning, I woke up early to make sure I had enough time to get to the airport on the S-Bahn (and also to check out the famous Lufthansa First Class Terminal). I popped into the Regency Club to see what they had for breakfast.

Strangely, the lights were out in the buffet area, although there was lighting in the dining area. (An attendant greeted me but did not bother turning the lights on). In the darkness, I saw smoked salmon, pastries, and nutella. 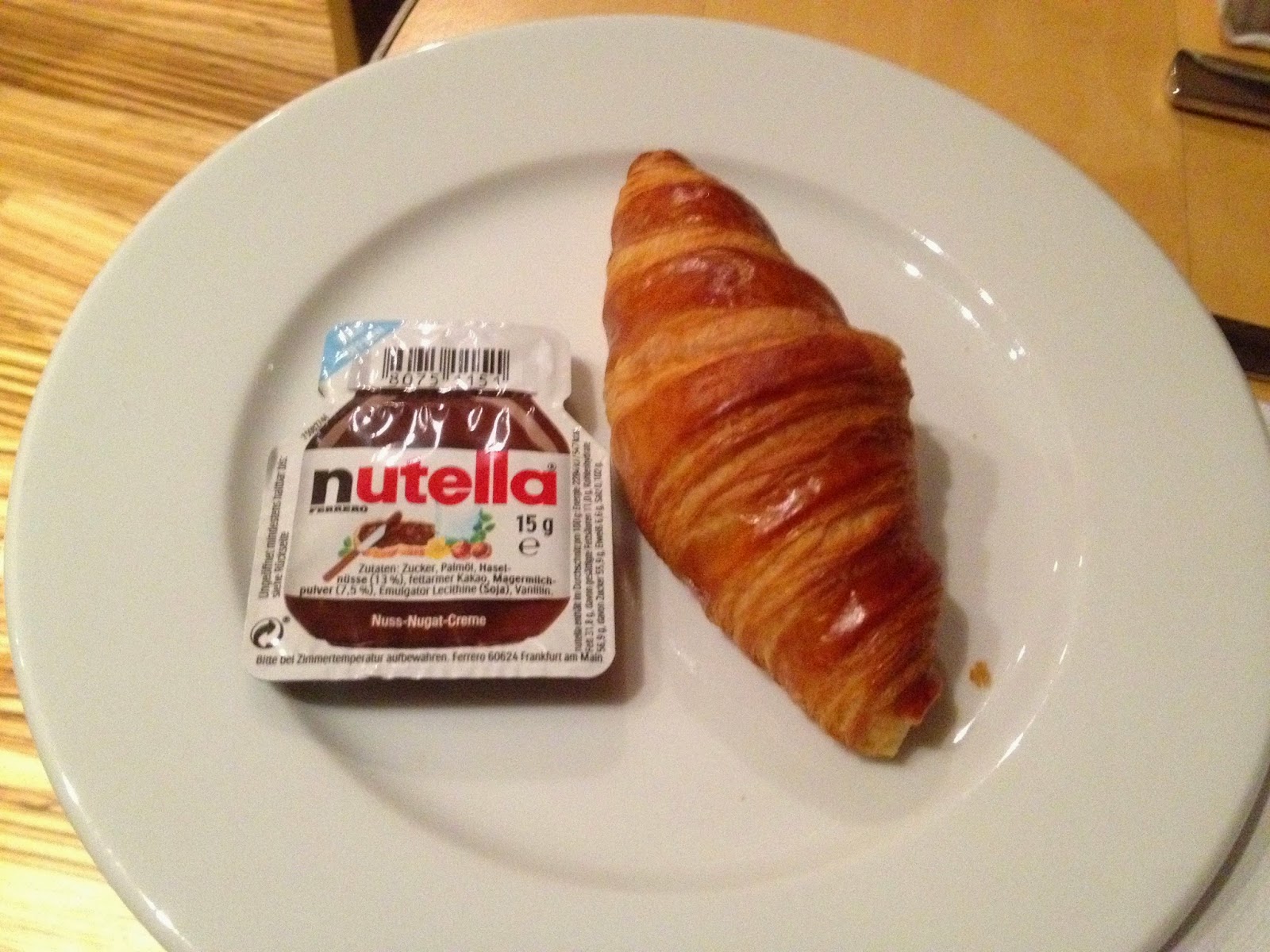 Conclusion
The hotel was perfectly fine - clean, quiet, and the generous-sized bathroom exceed expectations, and the staff (other than the Regency Club staffer) were excellent.

If you know your way or you speak German, it's not hard to get to, but it was a little tricky as a first-timer. If you stay here, make sure you bring a map. The streets were deserted; if I had gotten lost, there was nobody to offer directions.