The passengers seemed a bit grumpy as they boarded the A380 superjumbo headed toward Shanghai. The flight had been delayed an hour because of a last-minute aircraft switch (something about plumbing issues). They boarded Suites Class, Business Class, and Star Alliance Gold elite members at the same time - that's way too many people for one boarding group. 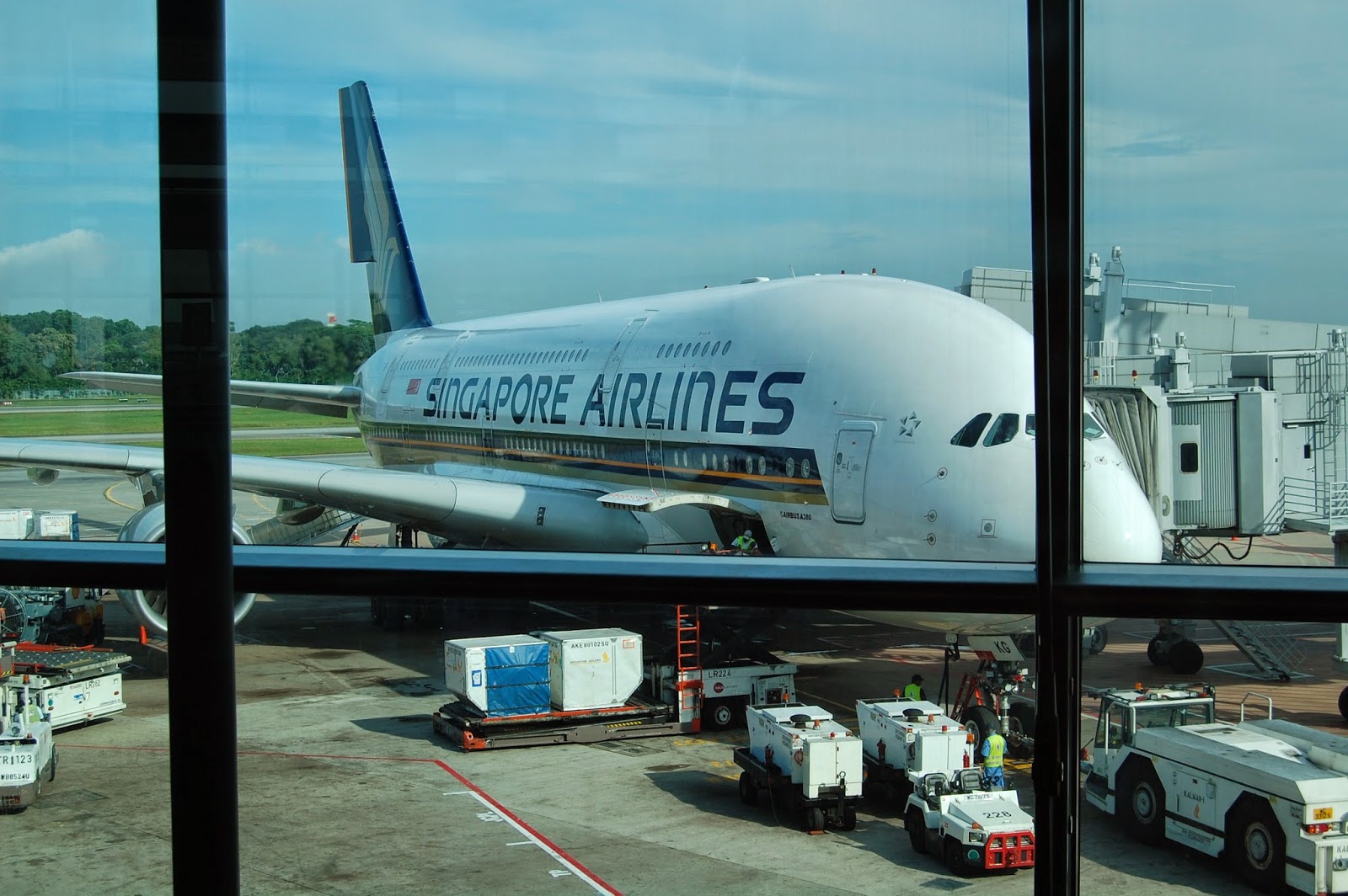 The A380 from Singapore to Shanghai 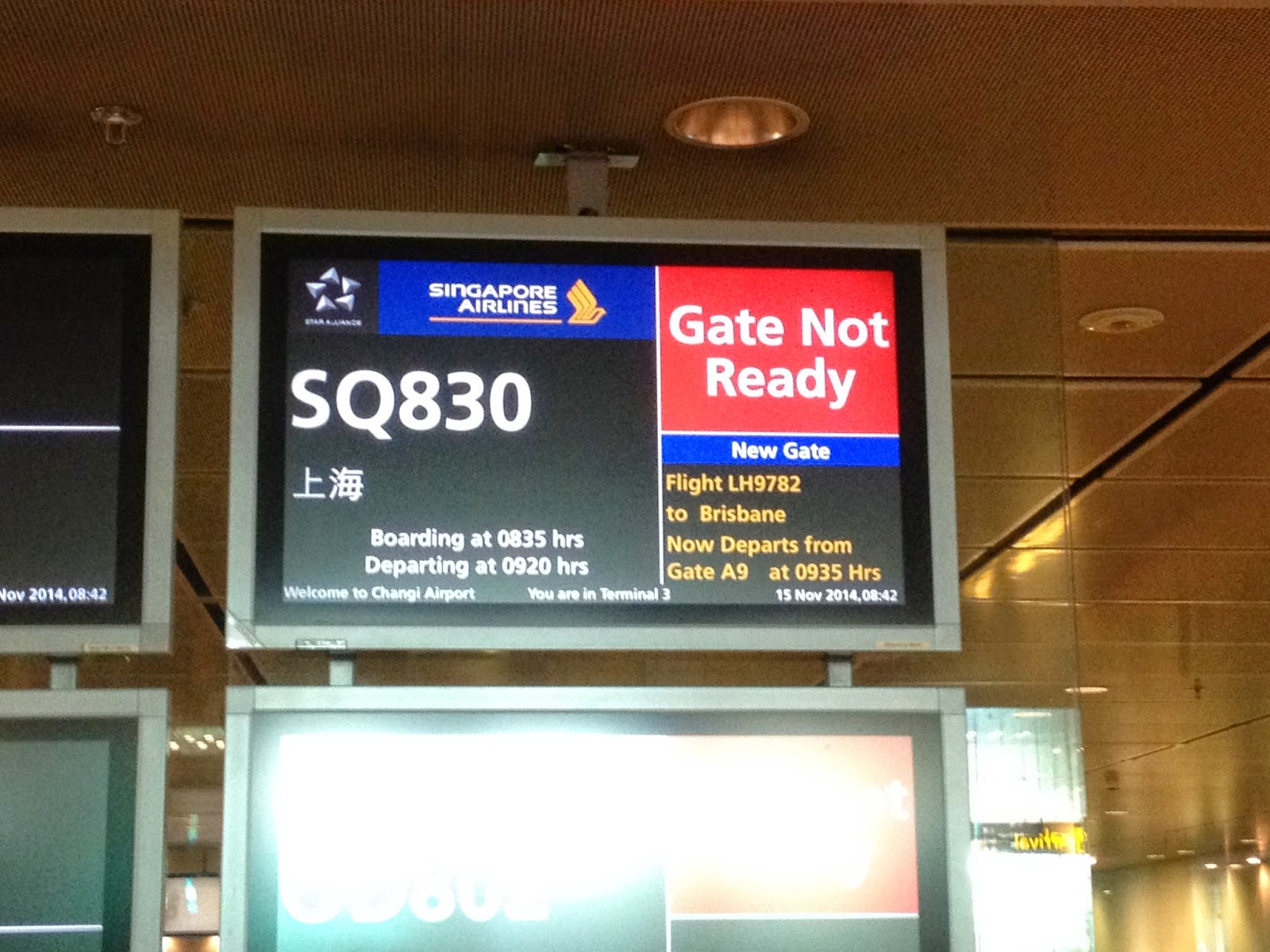 But Suites Class has a way of making everything better.

Here are some pictures (see the previous flights here and here for more). 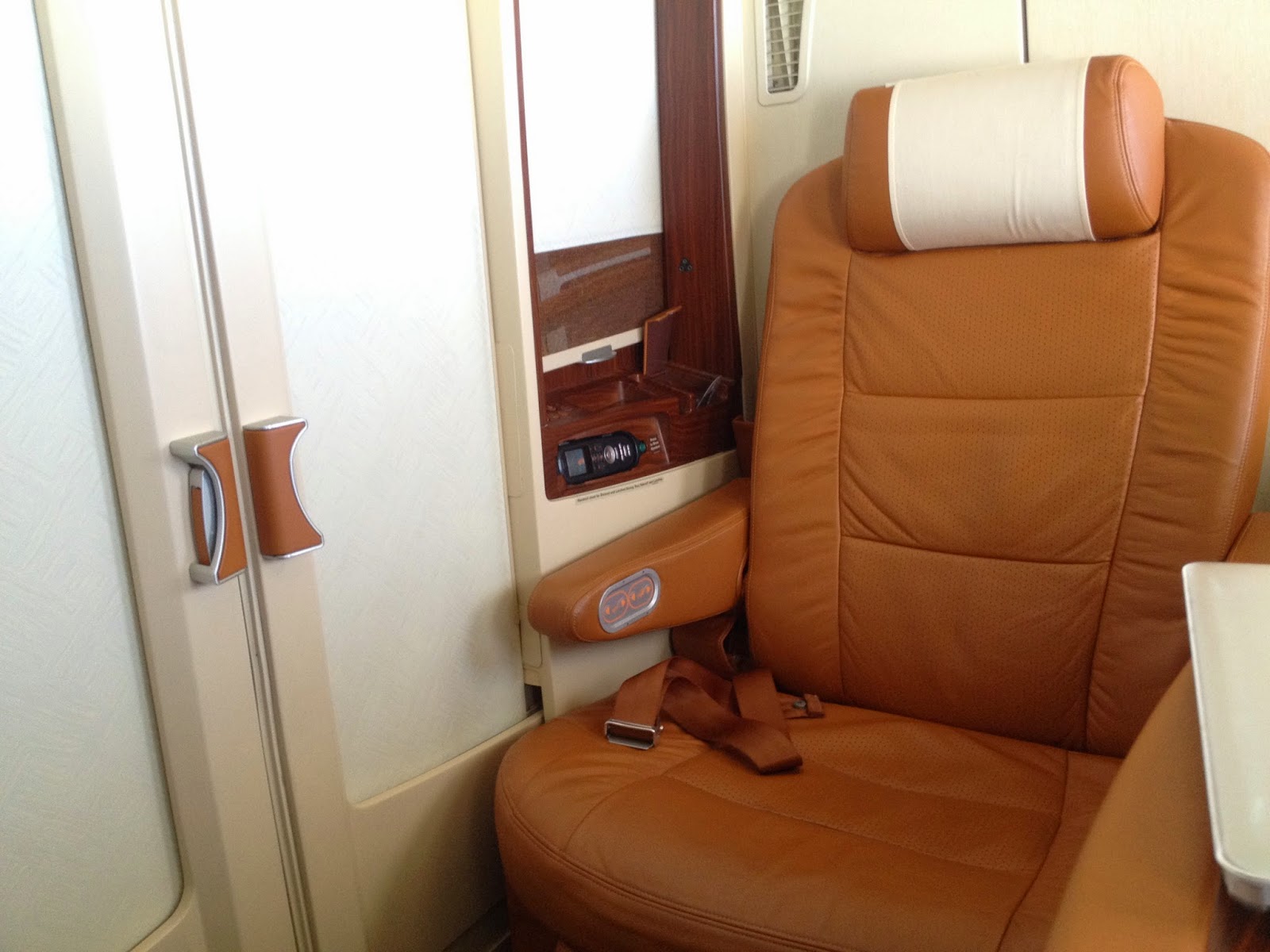 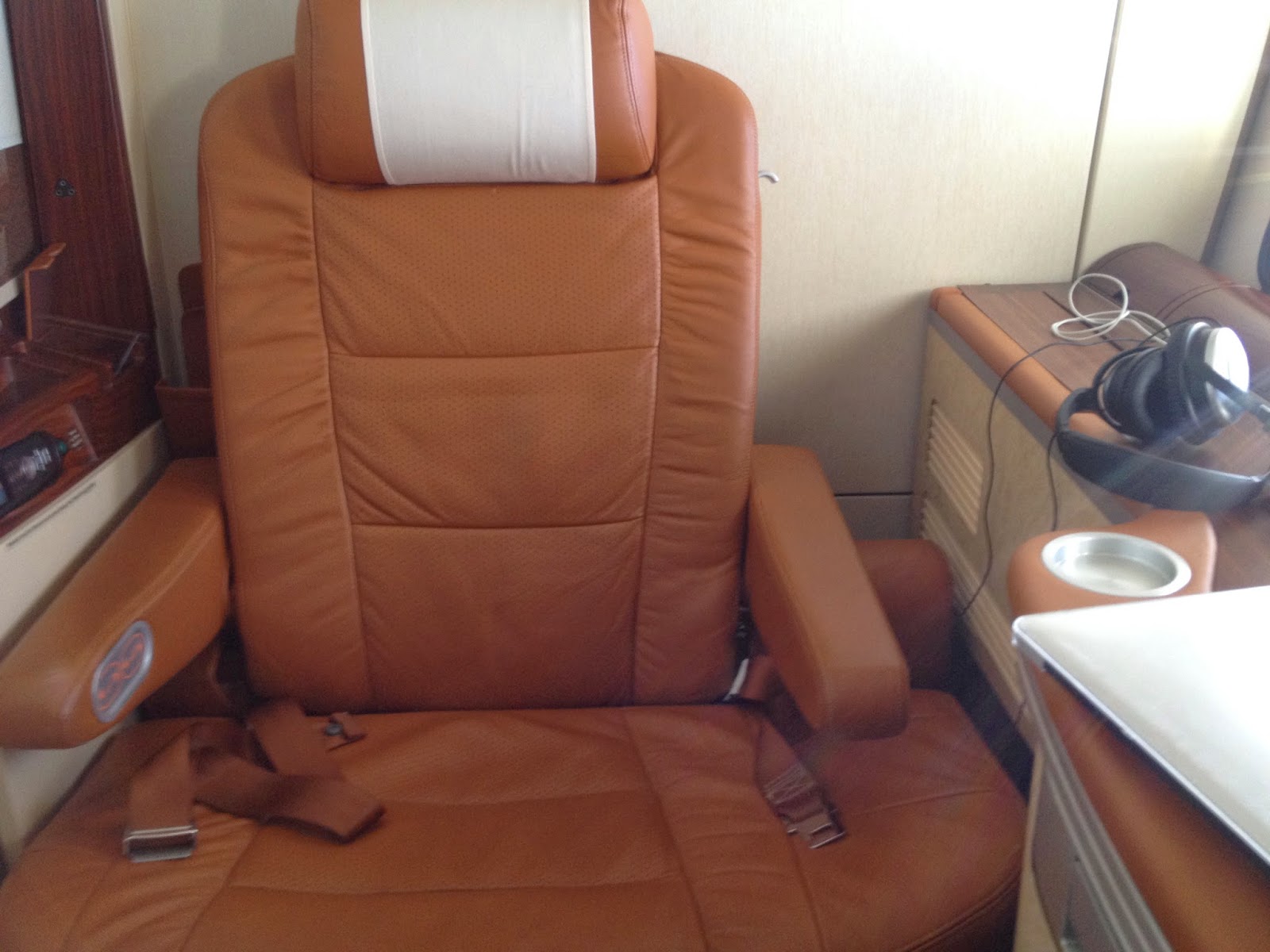 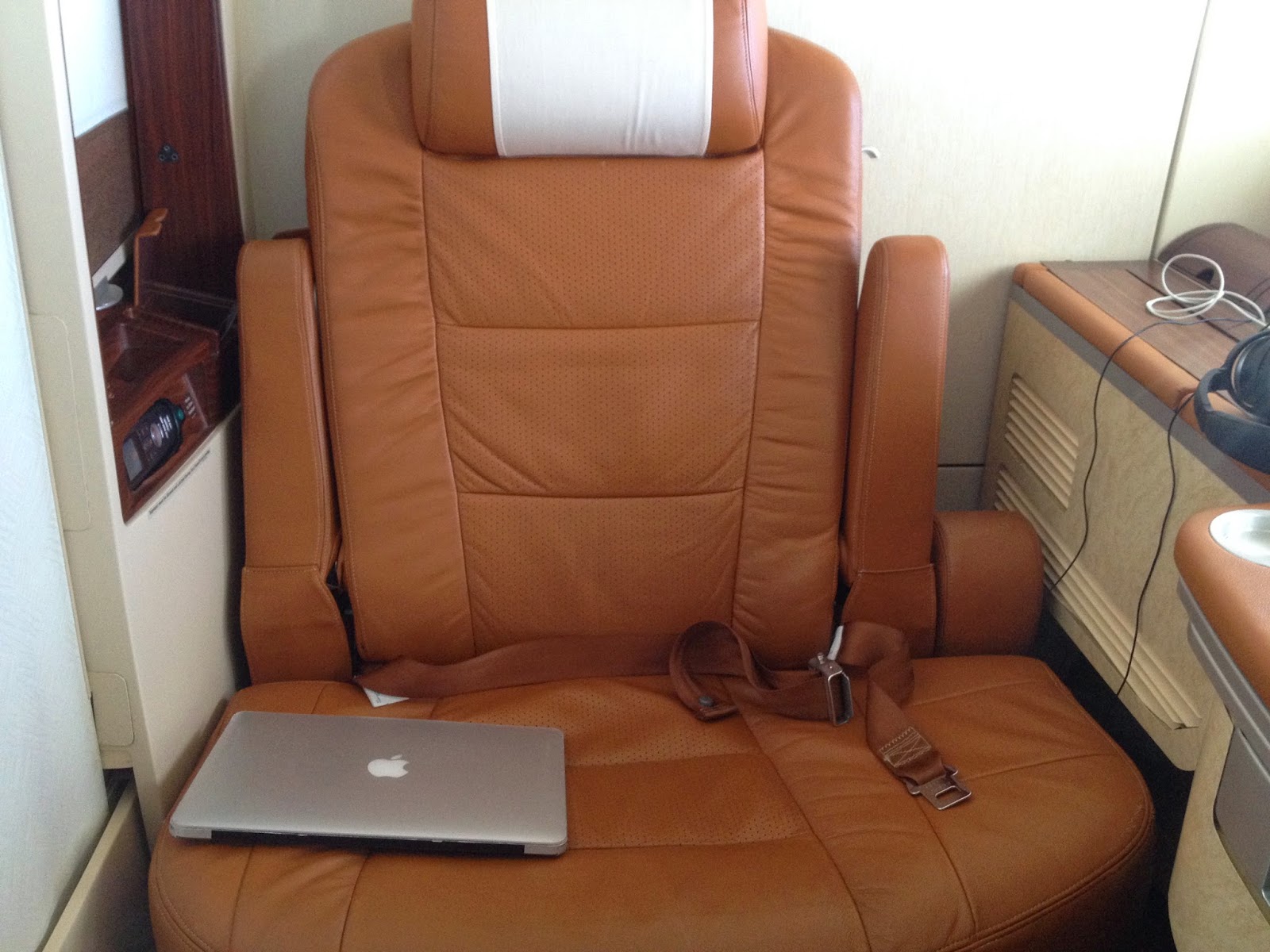 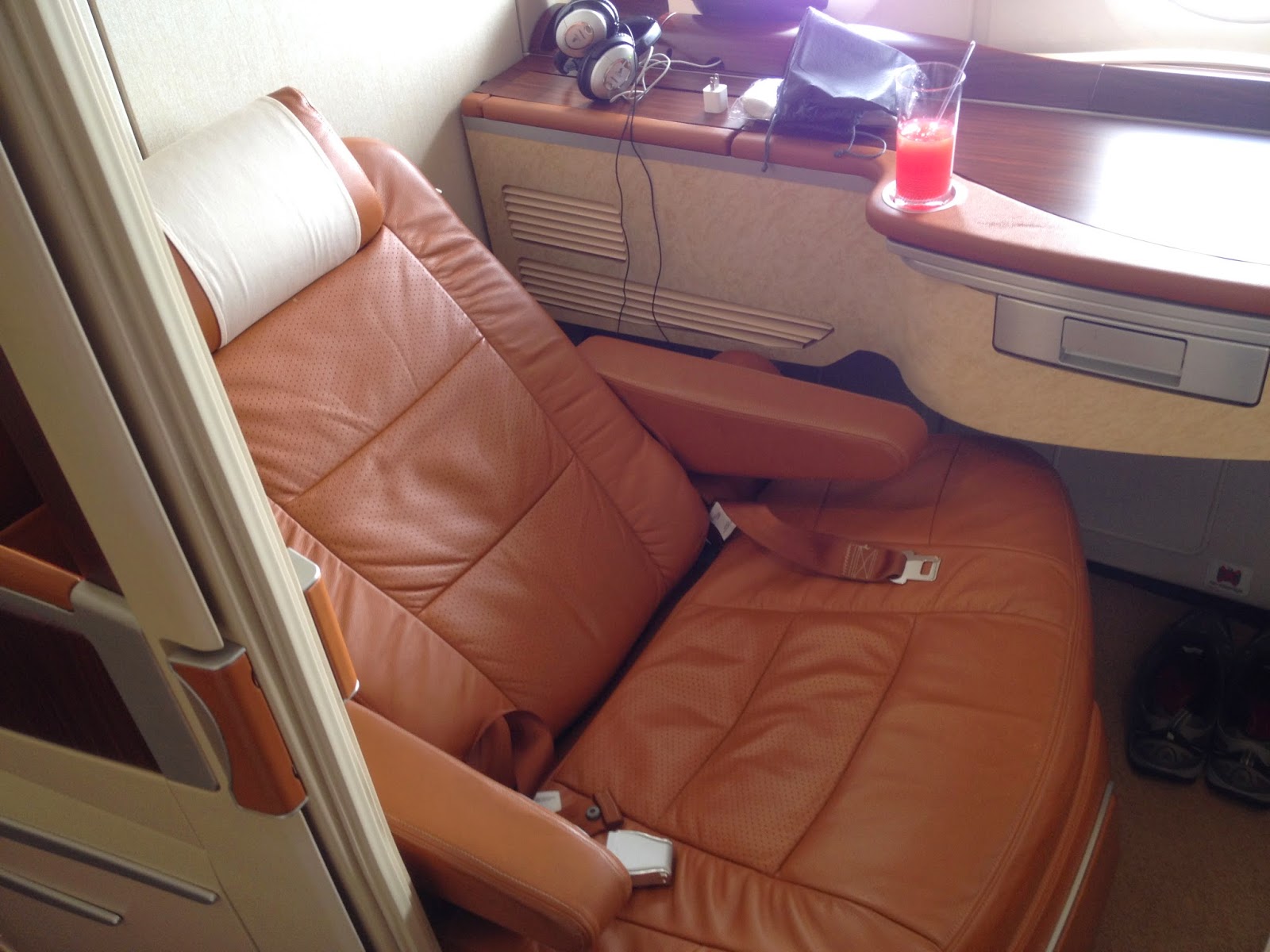 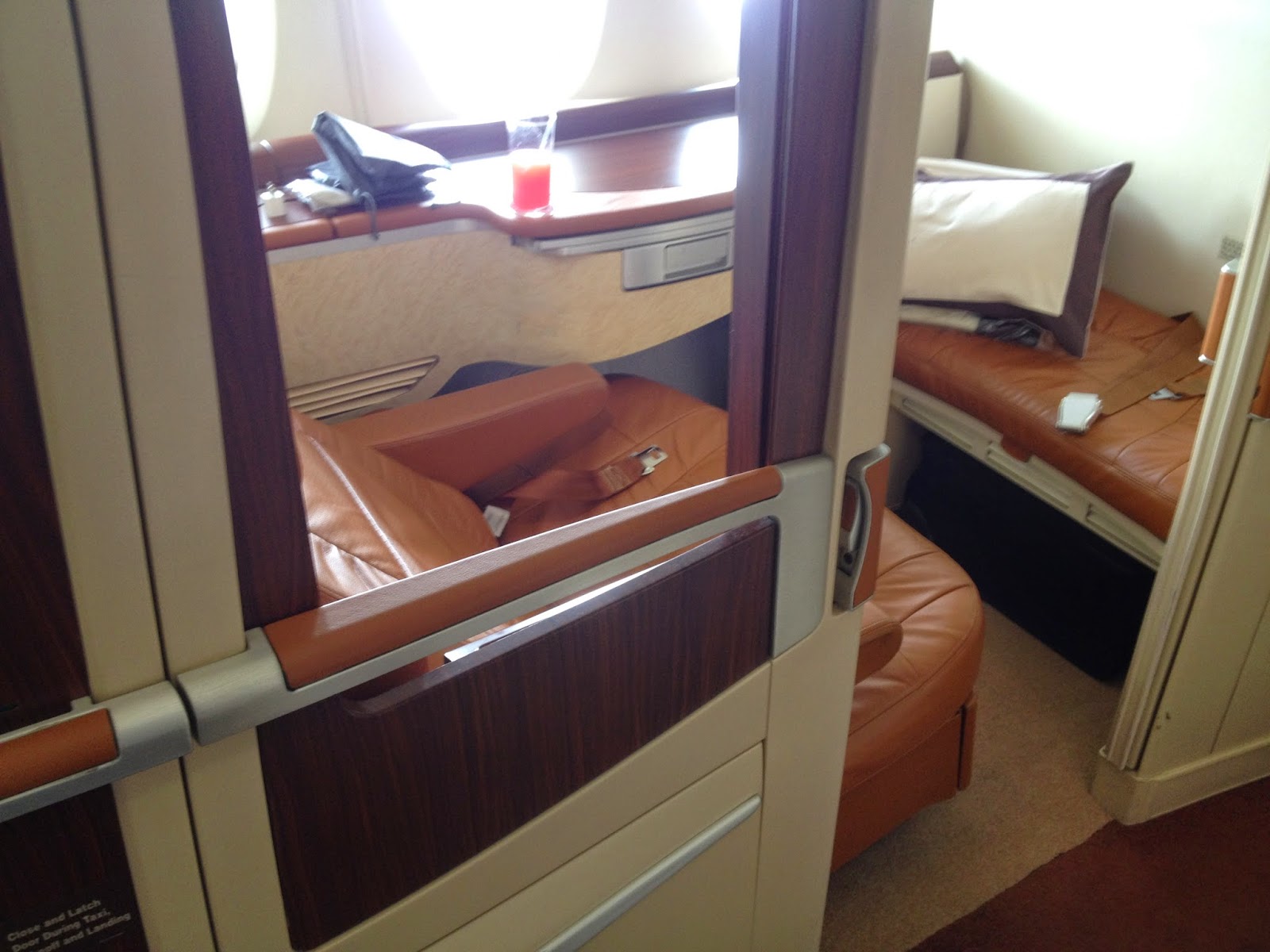 View from the aisle 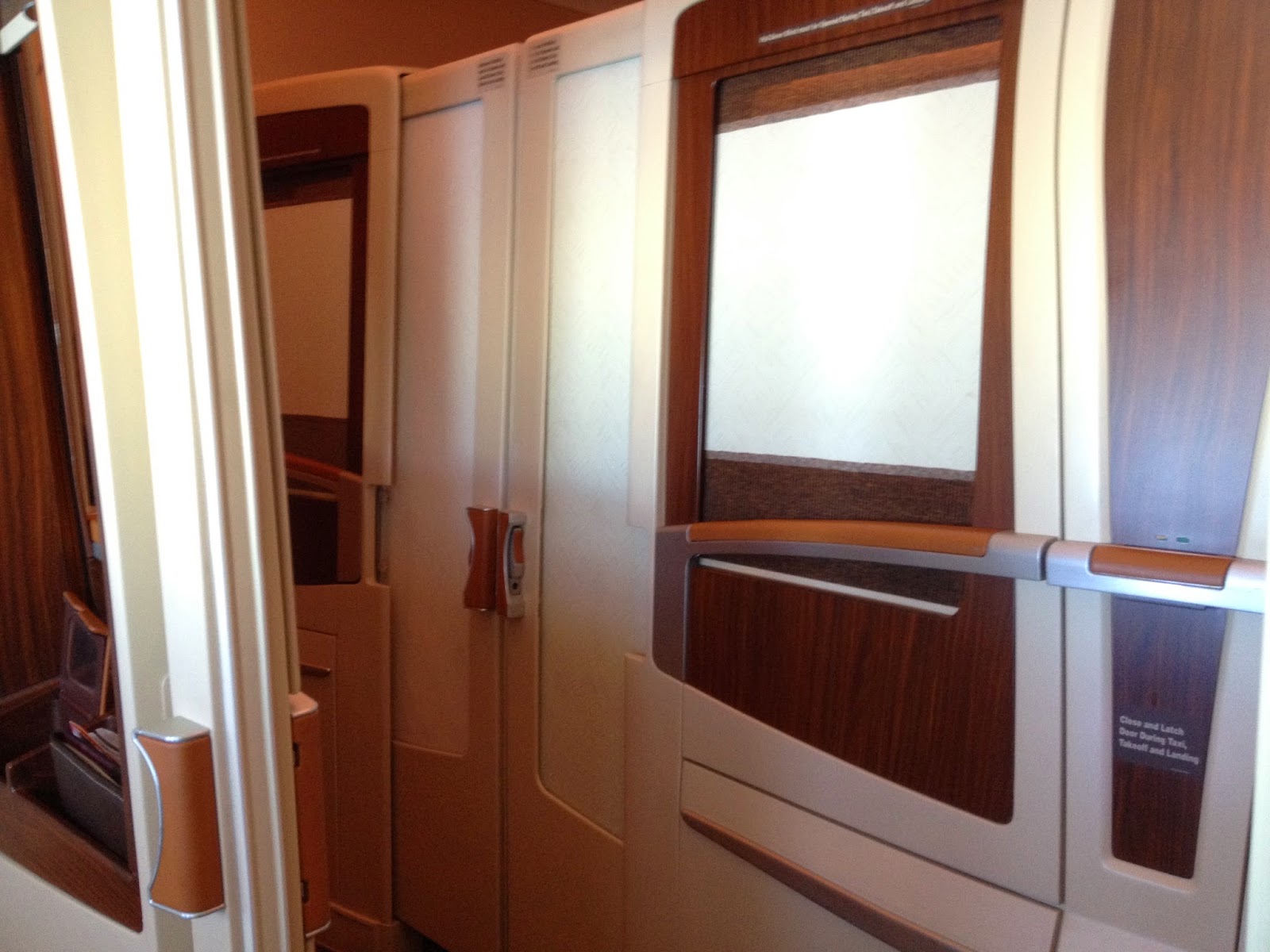 Closed suite across the aisle 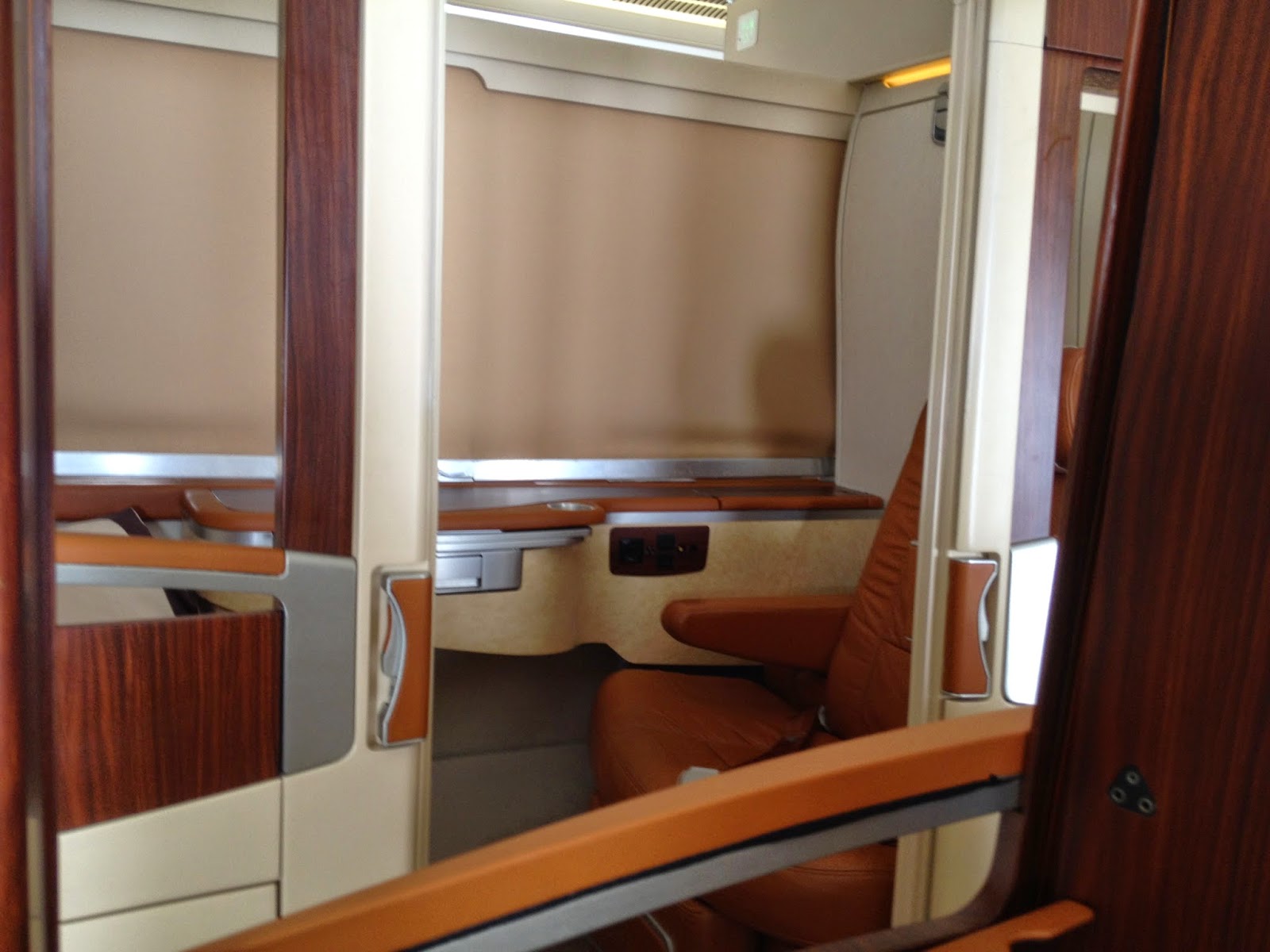 Empty suite across the aisle (with center divider raised) 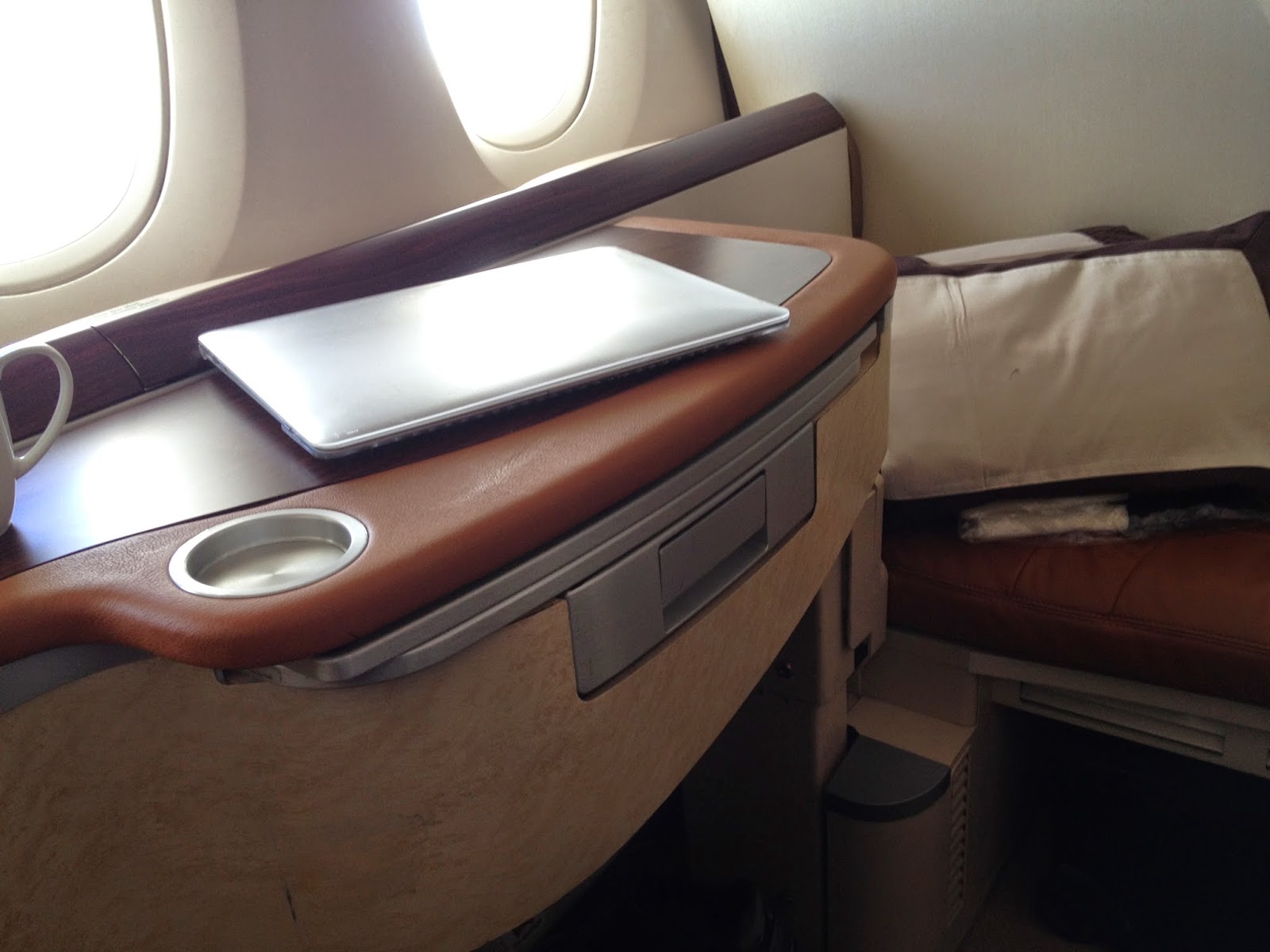 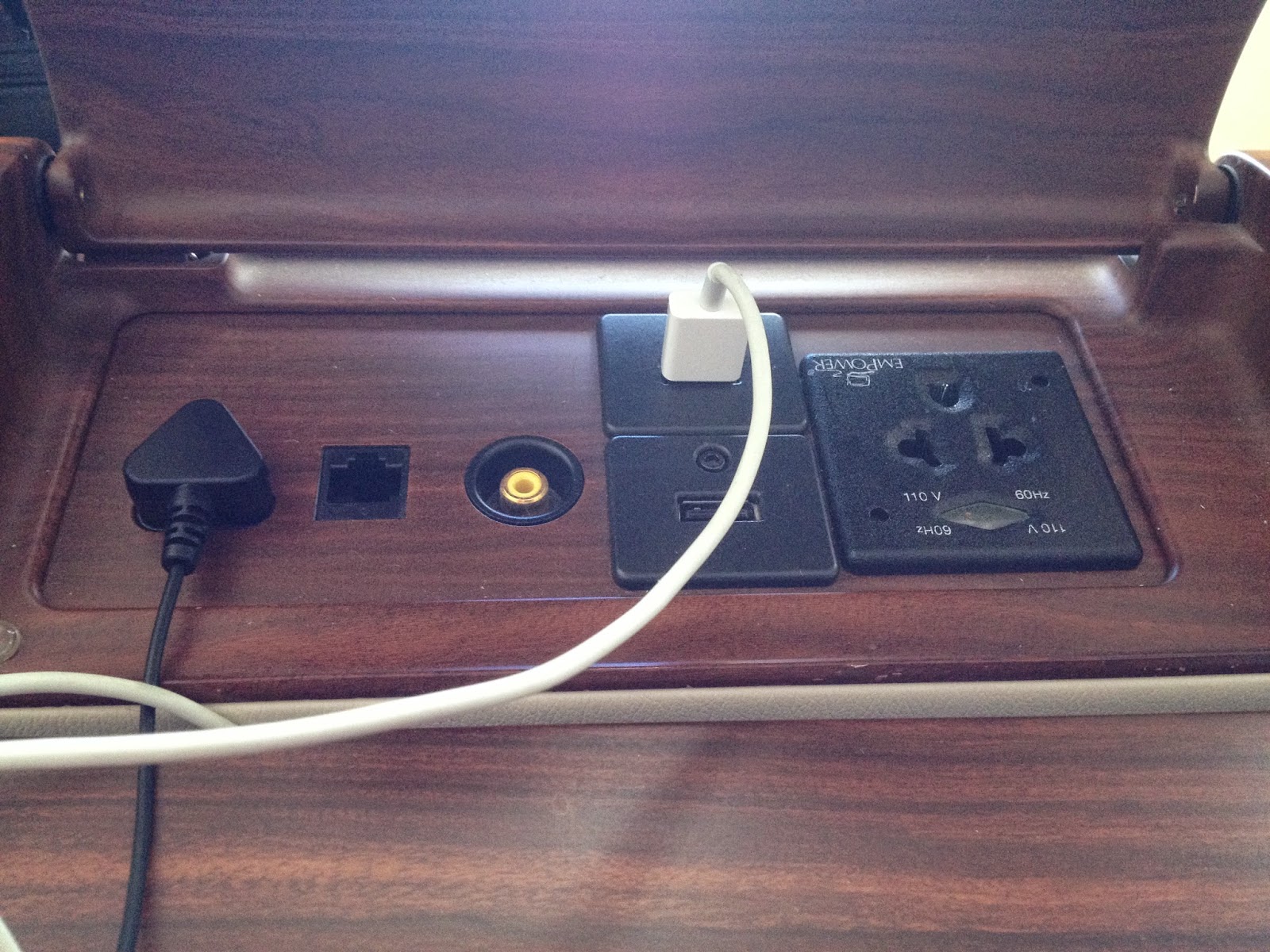 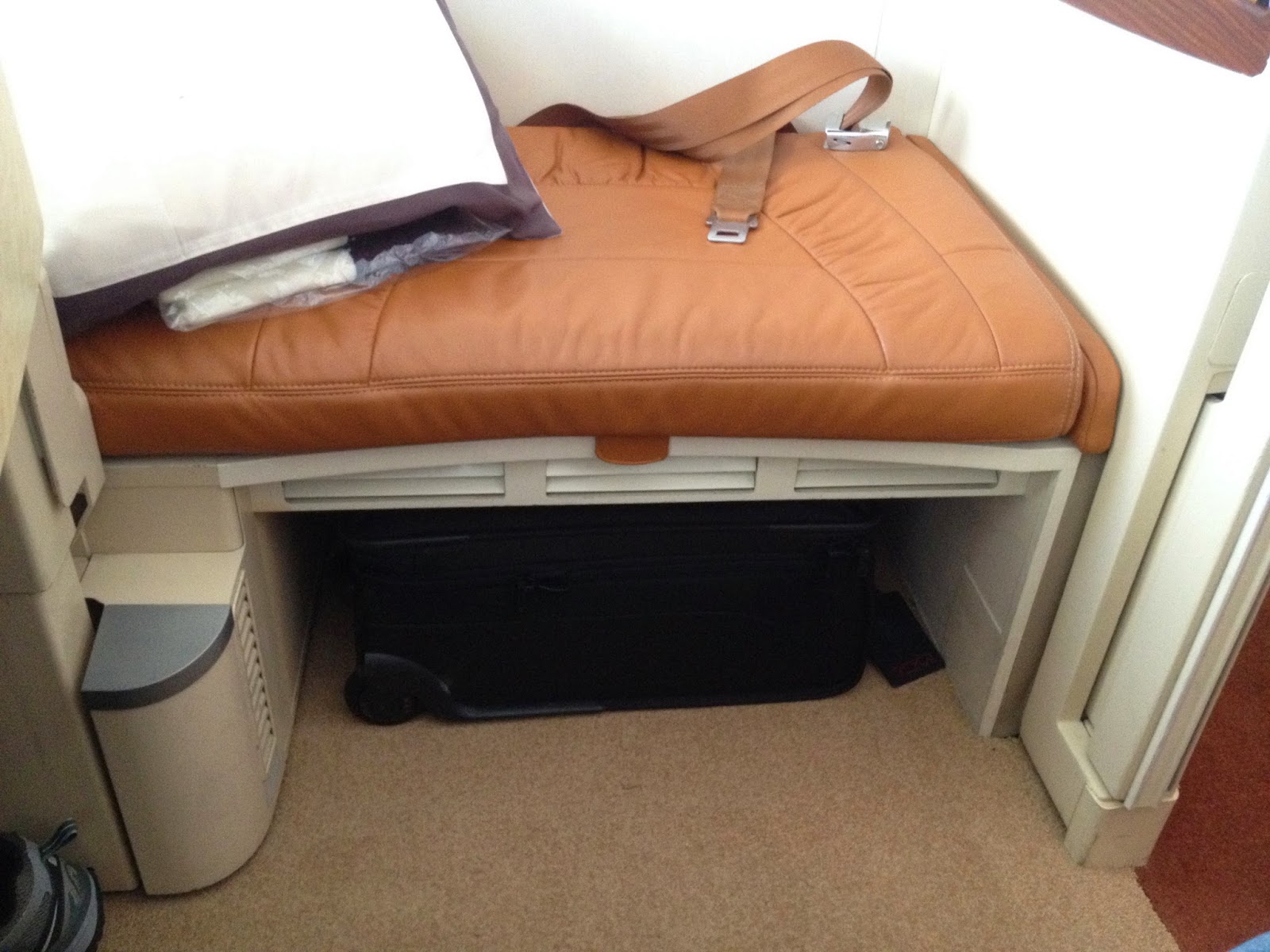 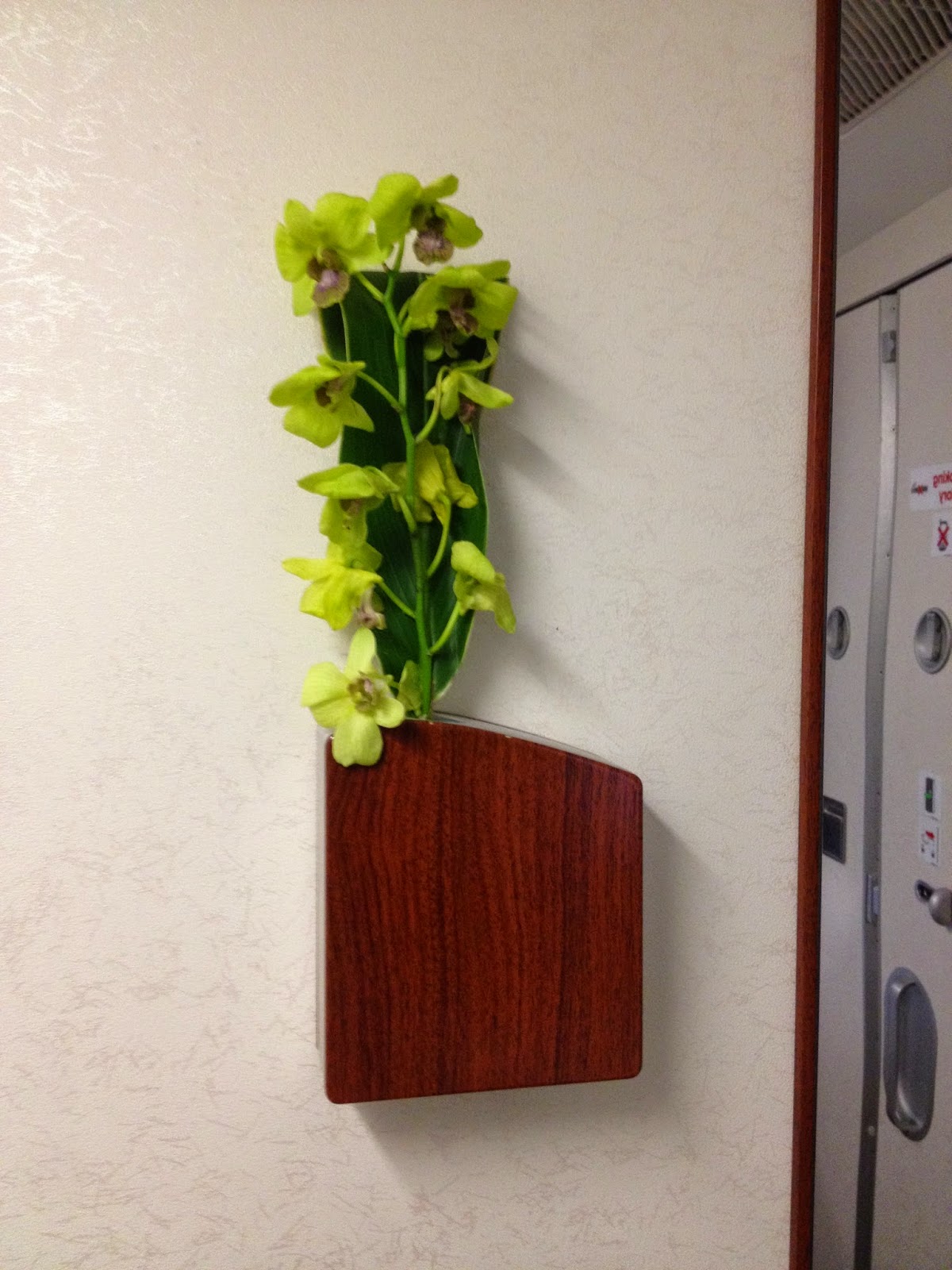 Orchids in the bathroom

Although the service on both legs of Flight 11 met Singapore's usual standards of excellence, the flight attendants on this leg went above and beyond. Elizabeth, the lead flight attendant for the Suites cabin, was particularly excellent. But unfortunately, there were no pajamas or amenity kit distributed on this flight - not that I really expected them on a short daytime flight.

The meal service began soon after we took off. We could choose from a haute-cuisine Chinese menu called the ming jia zhen zhuan (名家珍馔), which Singapore Airlines translates as "treasured culinary creations from a famed and reputable establisment." There was also a more traditional menu.

A selection of gourmet coffees & fine teas
served with pralines

I was tempted by the ming jia zhen zhuan, but I had pre-ordered my meal off the Book the Cook menu. And for First and Suites Class passengers flying out of Singapore, the menu is extensive. (The singaporeair.com website has full descriptions of each dish; to save space, I'm just going to type the "headline" of each dish).

Lordy. That menu rivals The Cheesecake Factory in length (and in quality, of course).

I ordered the prawn and chicken laksa. Laksa is a Singaporean dish that draws from Chinese, Indian and Malay influences (much like Singapore itself): it's rice noodles in a thick coconut milk curry soup, usually served with seafood and/or meat, bean sprouts, and fish cake.

I'd eaten laksa three times before this flight. The first time was at the Singapore Airlines KrisFlyer lounge in San Francisco - they have a make-your-own laksa bar, and I decided it was one of the most delicious foods I'd ever had. The other two laksa outings (at Malay restaurants in Oklahoma City and Chicago) were considerably less successful. So I was eager to see what Singapore Airlines would serve.

But first, the satay. 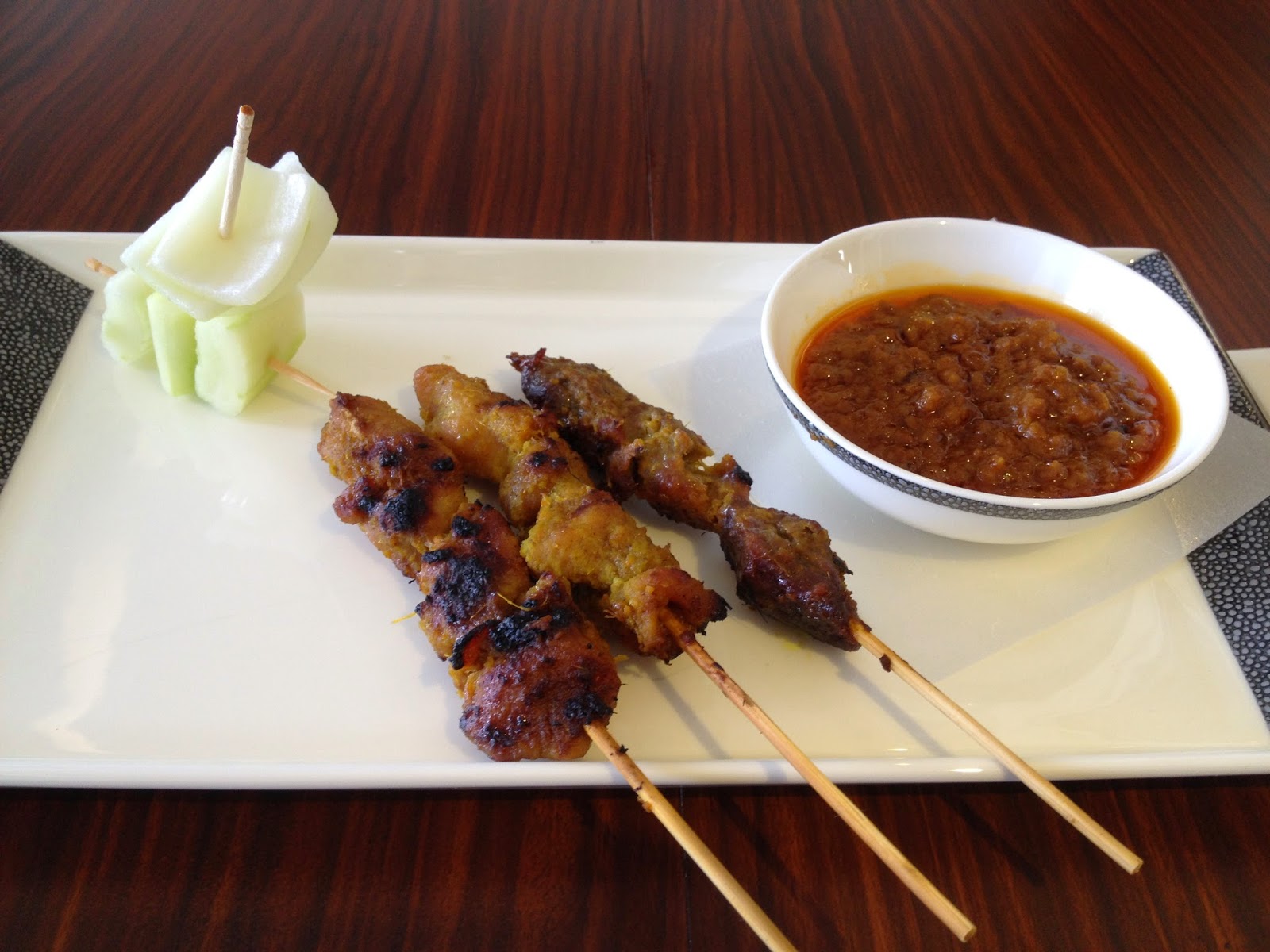 
I ordered a Singapore Sling (gin, Benedictine, orange liqueur, cherry brandy, Angostura bitters, Grenadine, lime juice, pineapple juice) to go with the satay. It's a bit sweet, but it's a Singaporean classic (or so they tell me). It also tastes like it has no alcohol in it. 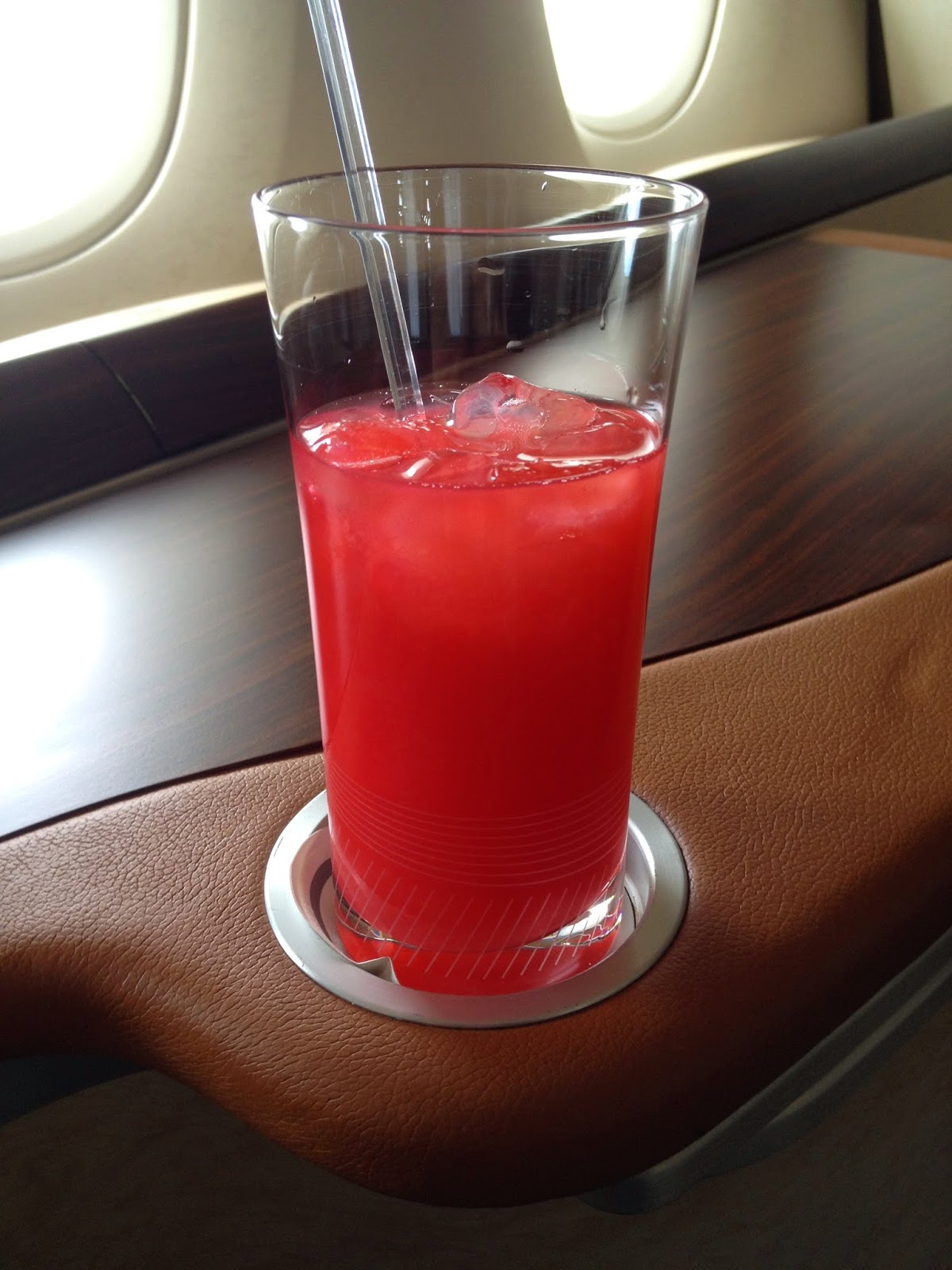 I ordered the antipasto appetizer. By mistake, they brought me the iberico ham instead - I had time to take a picture (but not eat it) before they realized the error and took it away. (Too bad - I should have asked them if I could keep it). 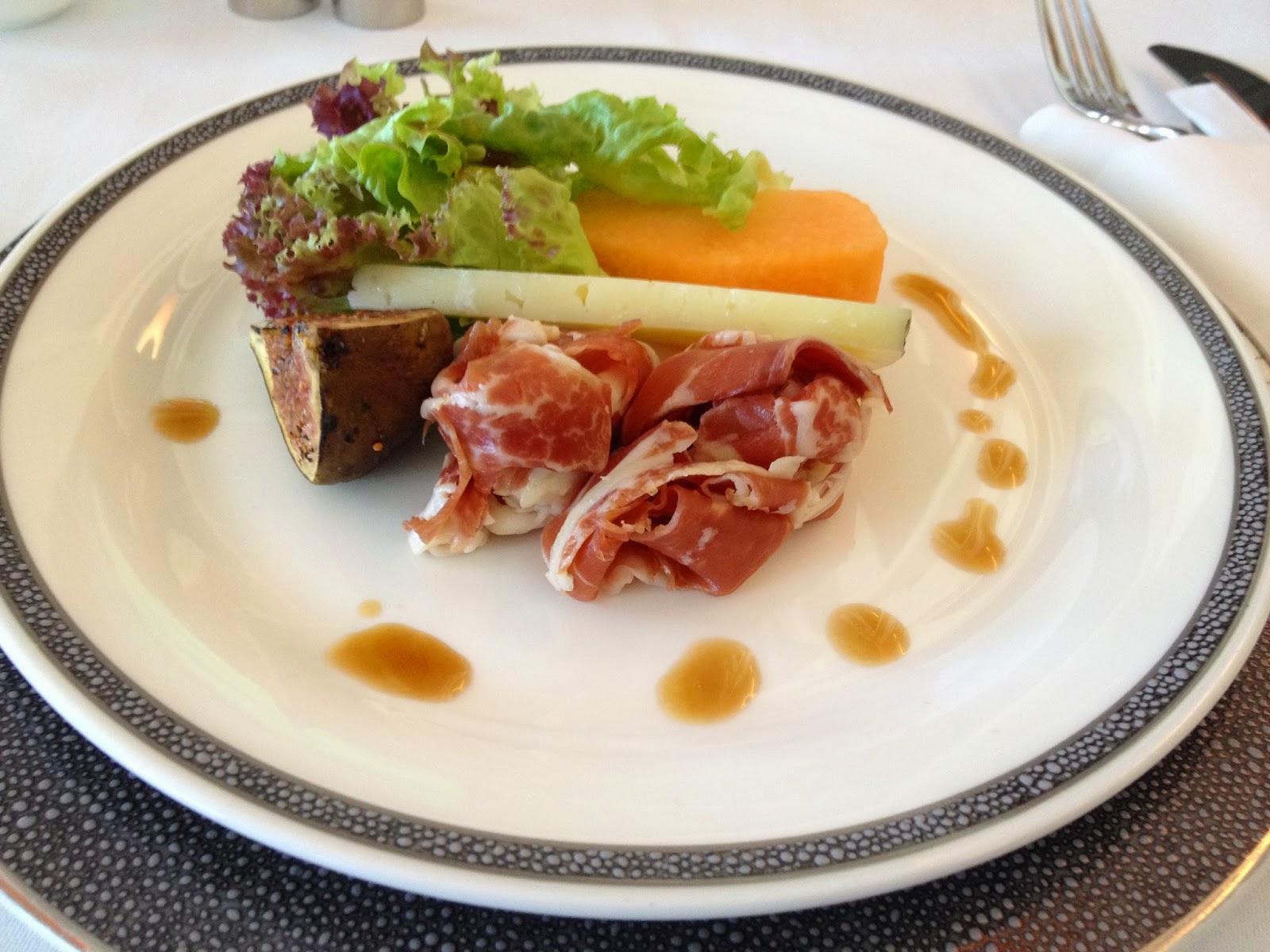 But then they delivered this beautiful antipasto plate. The highlight was the foie gras mousse, but everything on the plate was superb. 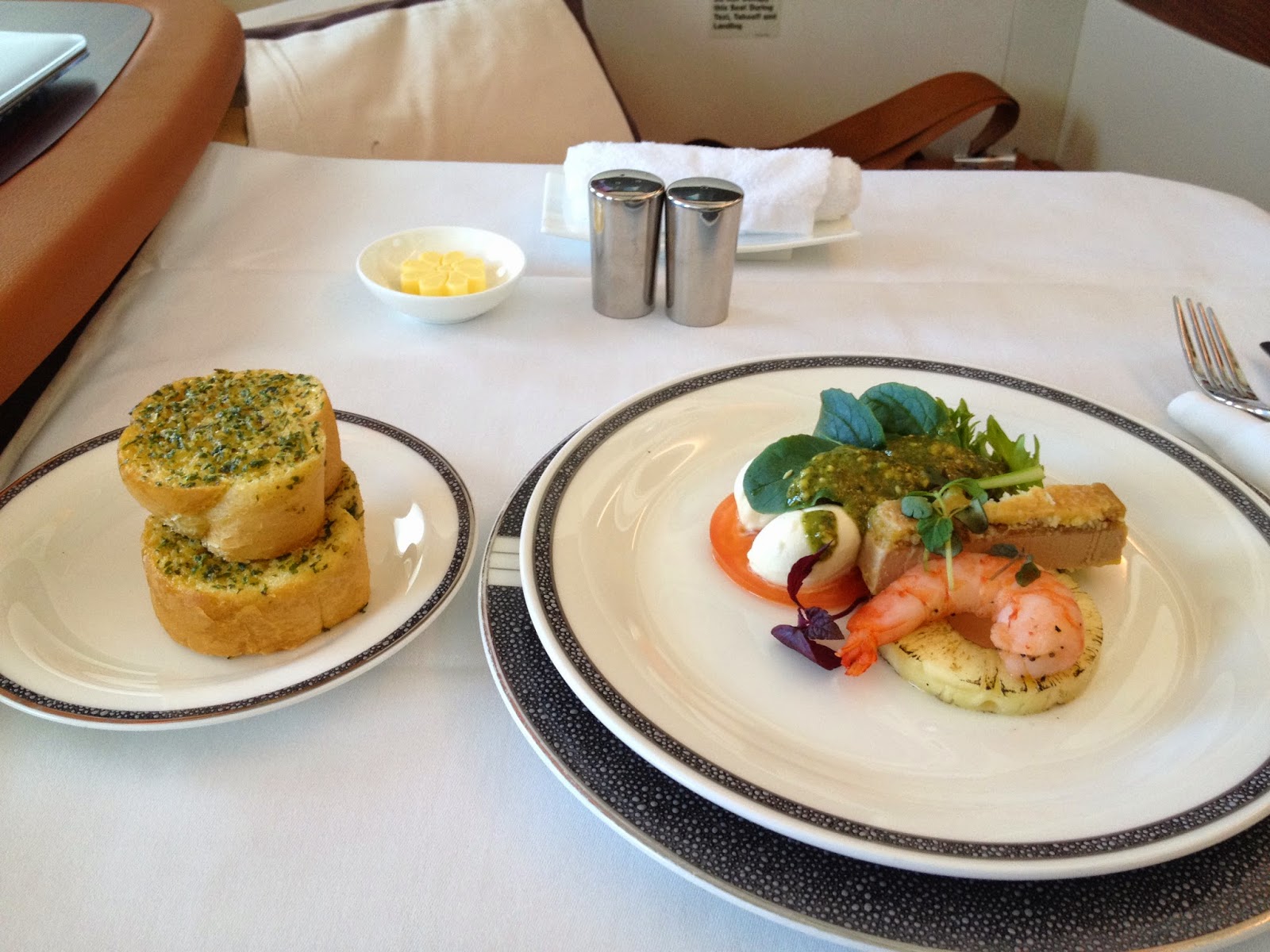 And then for the highlight of the meal: the laksa. The steward brought it to me, whispering conspiratorially: "Excellent choice. This is my favorite dish off the Book the Cook menu." He might have just been flattering, but c'mon... look at it. It's beautiful. 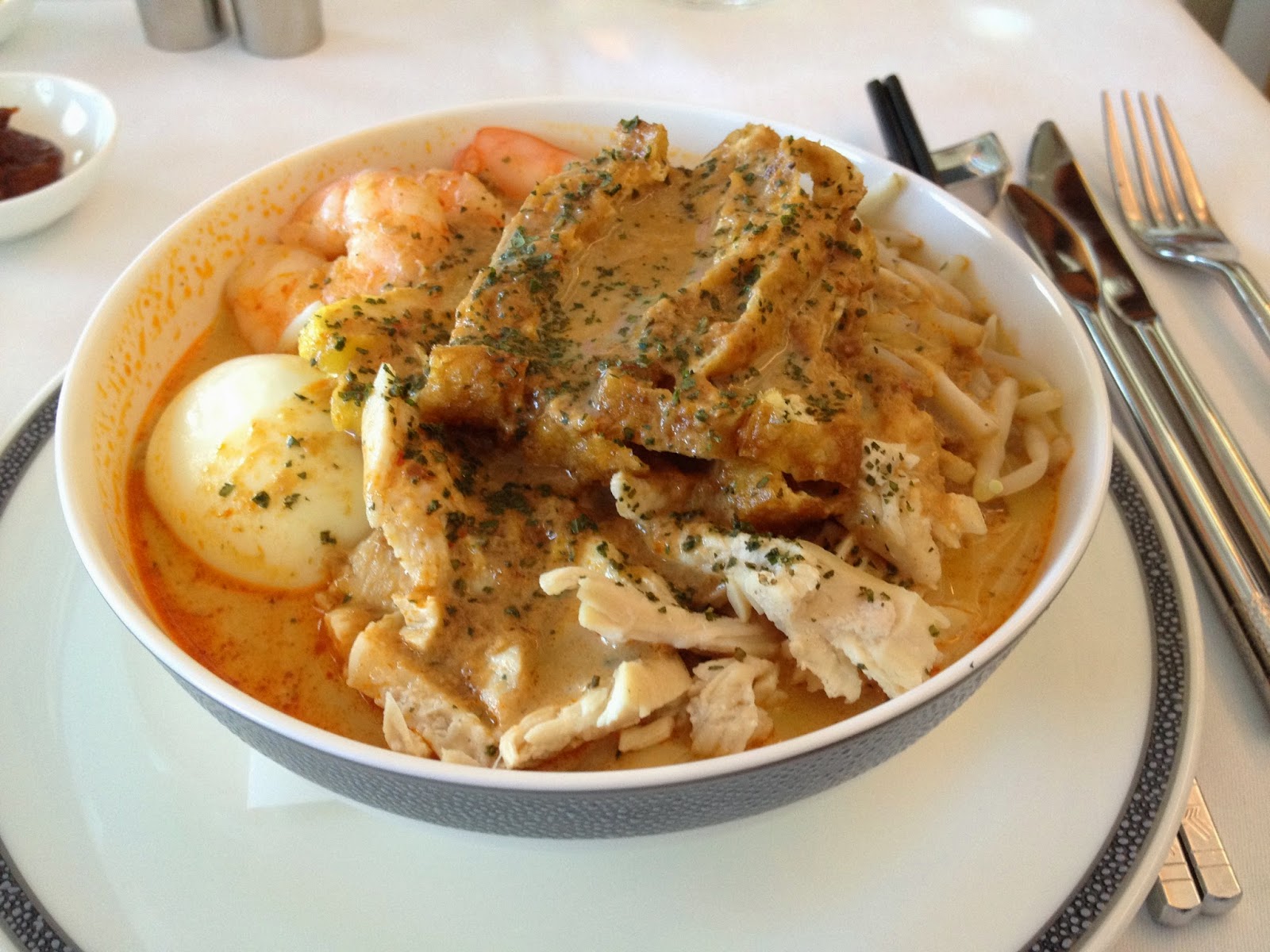 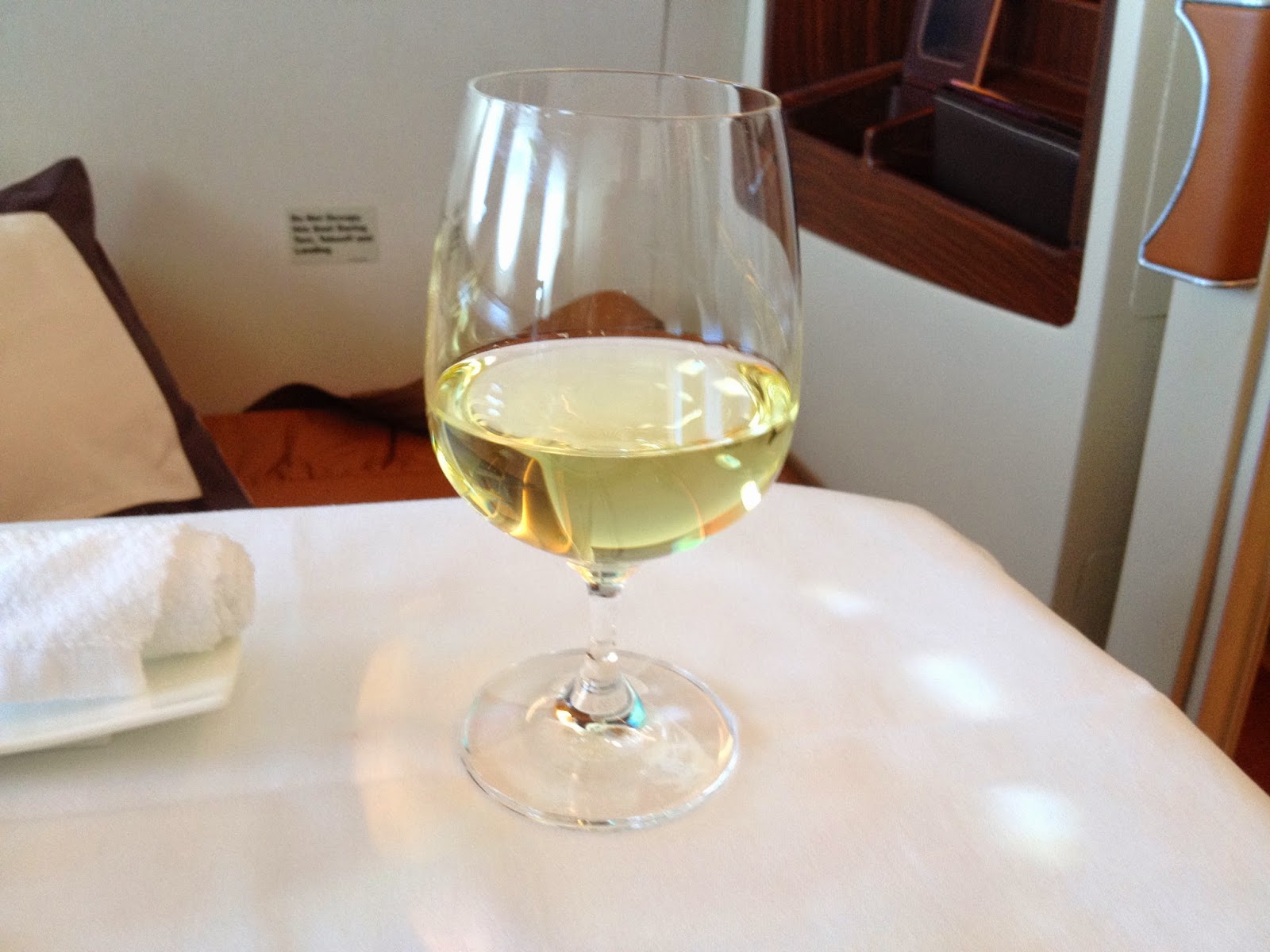 As Elizabeth came to clear my plate, I was a bit embarrassed at the mess I had made. I'm kind of a clumsy eater, and the minor turbulence didn't help. 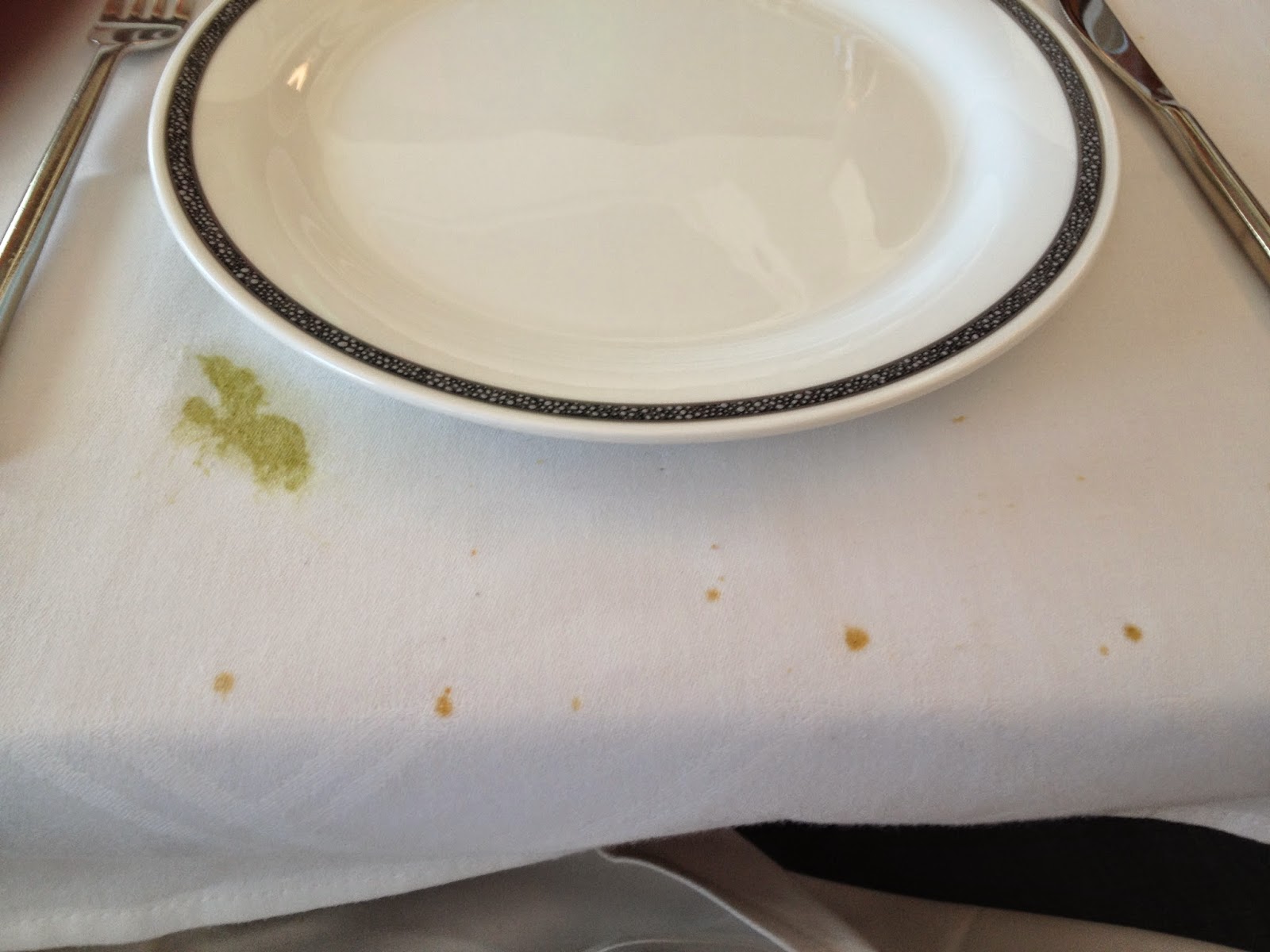 For dessert, I helped myself to a tangerine and a white peach from the cheese cart. 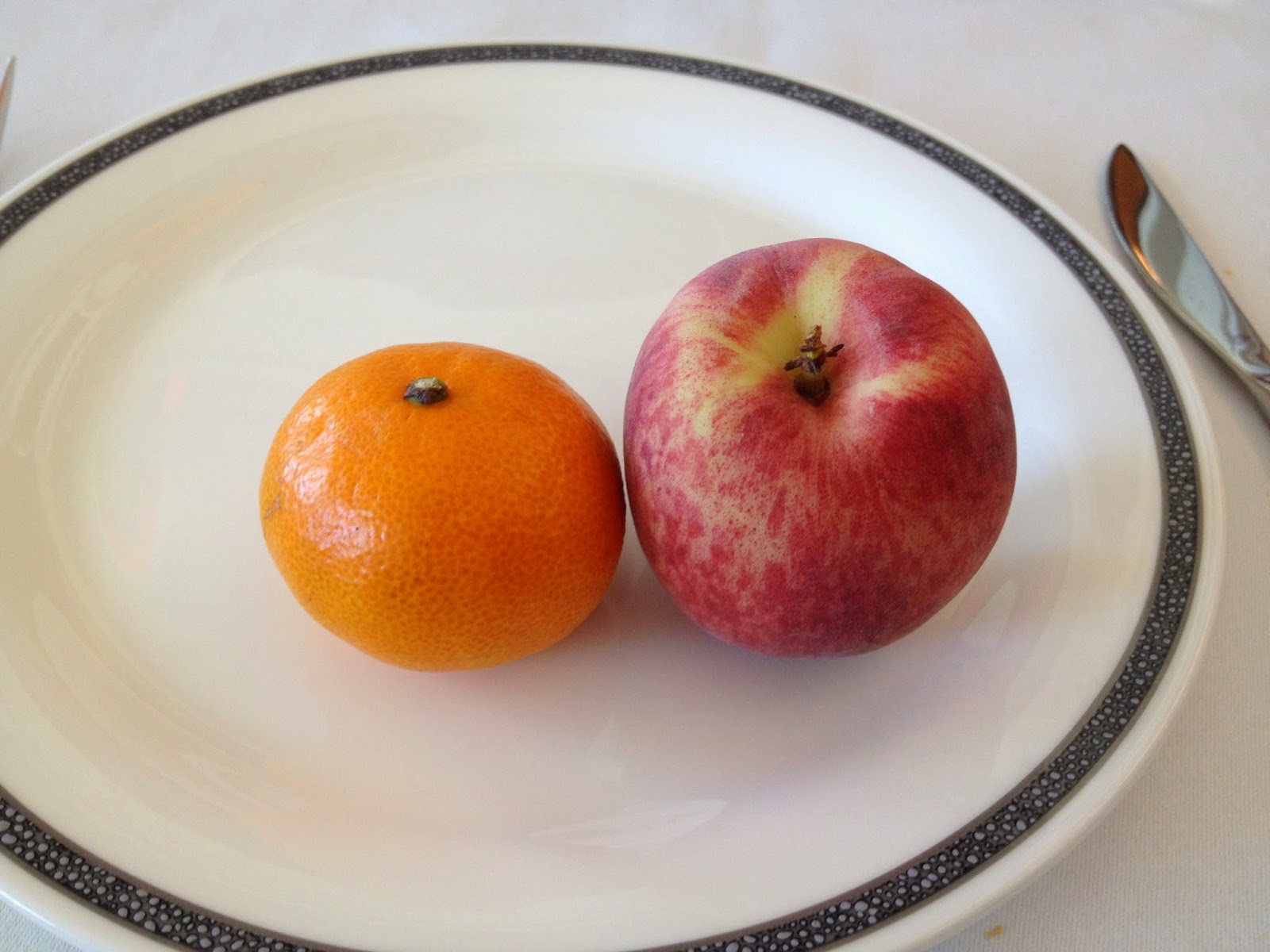 When I was in high school, I spent a summer selling organic fruit at the local farmer's market. We had several types of apples and nectarines - they were great. But the white peaches were the highlight - firm, but still bursting with that delicious peachy flavor. Since high school, I've bought plenty of white peaches, but they're not as good - they're either bland or mushy.

But this peach was perfect. I don't know where they got it, but I want another one. This is the sort of peach that Mr. Caterpillar from James and the Giant Peach would sing about.

I finished the meal off with some green tea (recommended by Elizabeth). 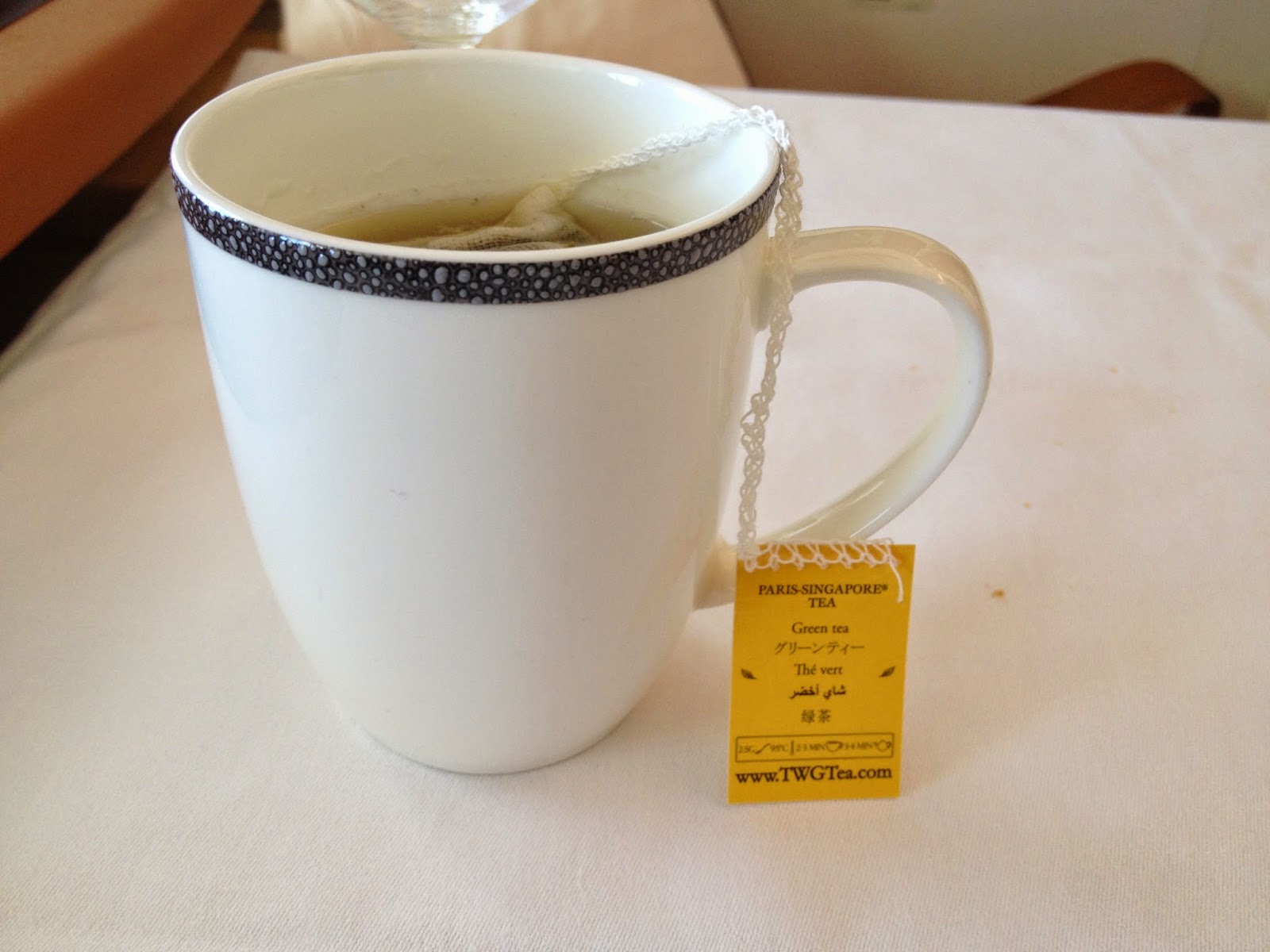 
I asked Elizabeth if I could walk around the upper deck - she told me that she'd be happy to give me a tour of the plane. 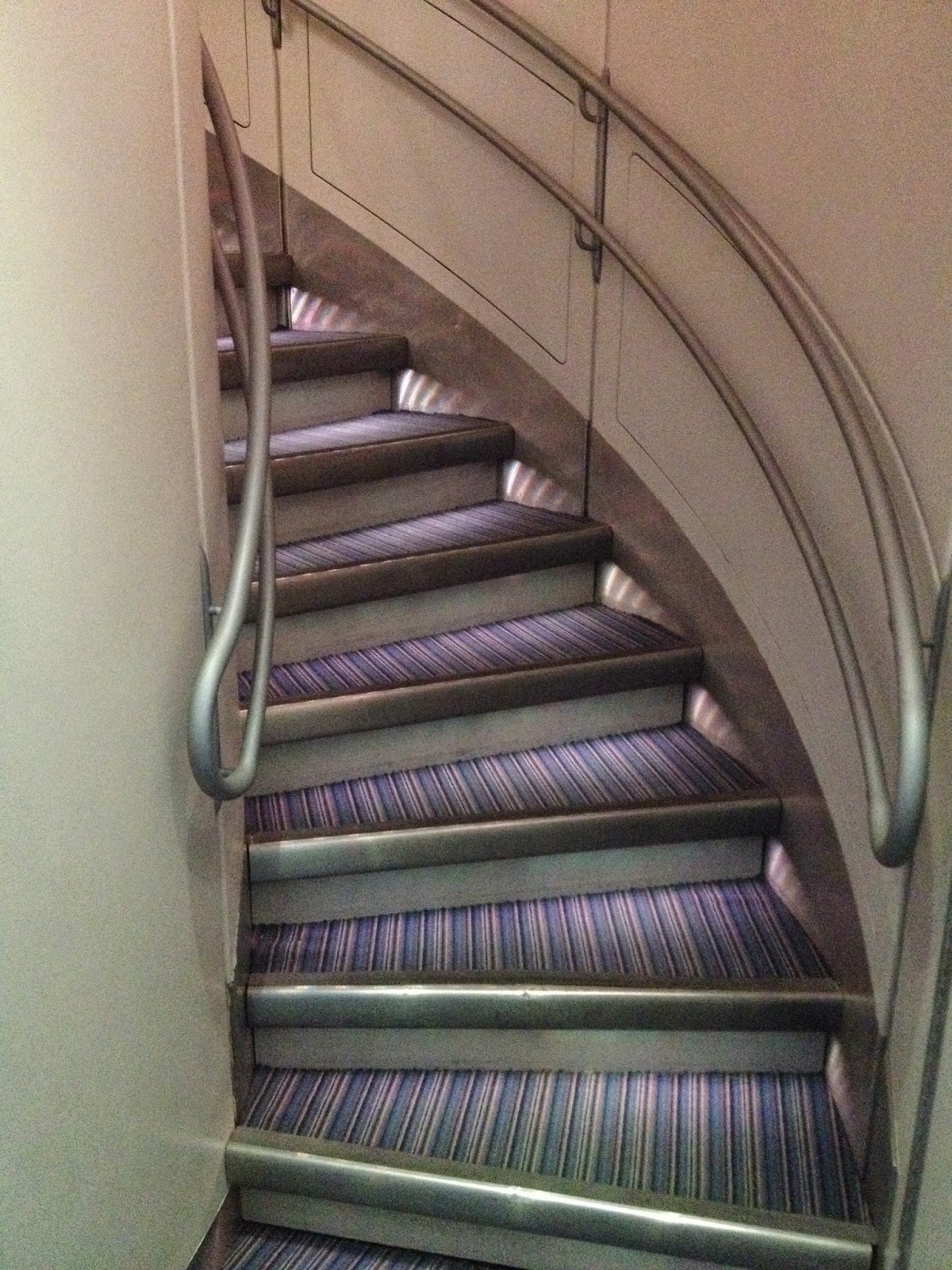 Spiral staircase to the upper deck

The A380-800 comes in two configurations: one has an all-Business Class upper deck. Ours was half Business Class and half Economy Class. Almost every seat was full in both cabins. The Business Class seats looked plenty comfortable - better than first class on most airlines. (I flew Singapore's A380 Business Class on an award itinerary back in 2012 from New York-JFK to Frankfurt and was blown away by the quality of the seat and the service). 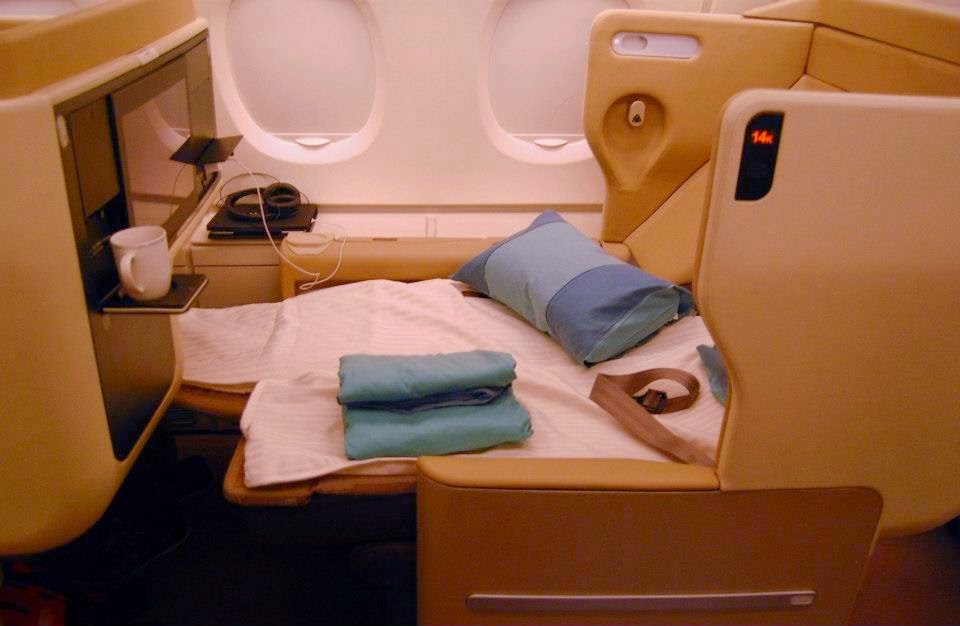 Business Class (from a previous flight)

On the main deck, economy was full. 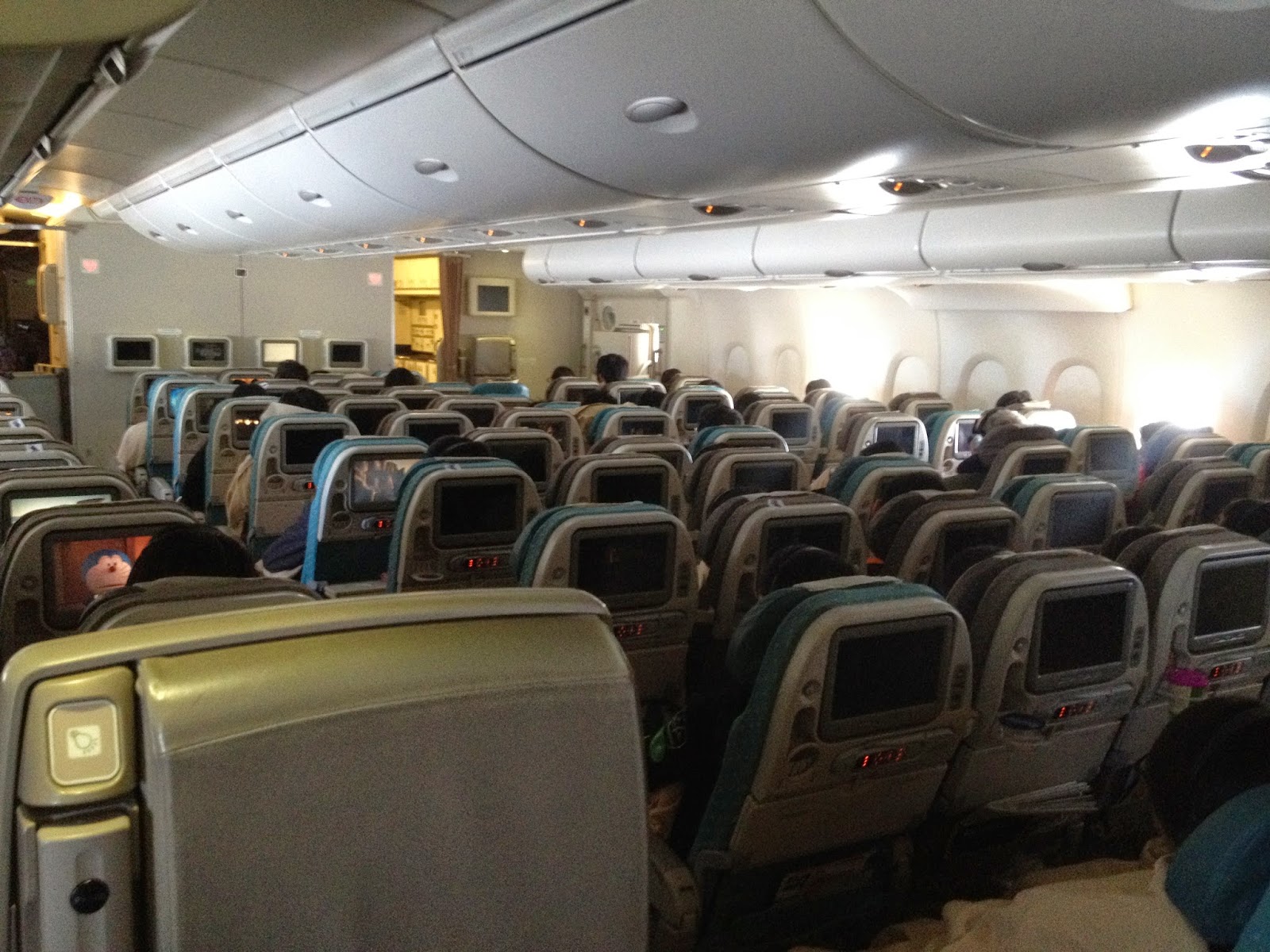 It's worth noting that main-deck Economy is in a 3-4-3 configuration, while the 88-passenger upper-deck Economy cabin is 2-4-2, which feels much roomier.

It's not very far from Singapore to Shanghai, especially when you're traveling in Suites Class. Before long, we landed in Shanghai's Pudong International Airport and prepared to wait in a very, very long immigration line. 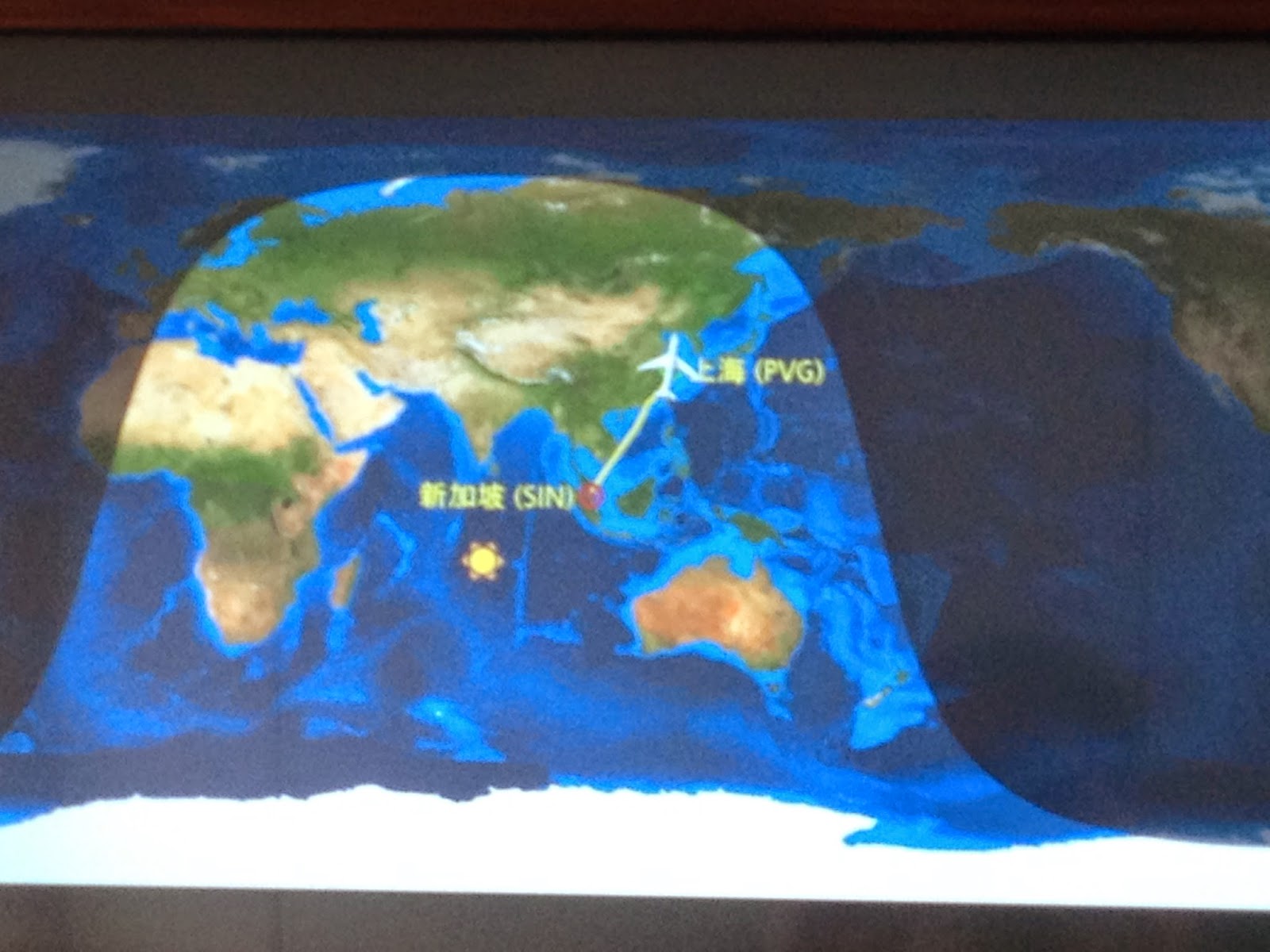 Conclusion
This trip was worth every mile I spent (and the hours of searching). It's hard to beat the privacy of an enclosed suite, and Singapore Airlines's food and service are both top-notch.

I drained my Chase Ultimate Rewards points to get this flight, but I'm already well on my way to getting enough with the help of a very generous 100,000-point American Express Platinum Card sign-up bonus. Those points transfer 1:1 to Singapore's frequent-flyer program, and my entire Los Angeles > Tokyo > Singapore > Shanghai itinerary was only 106,250 points miles.