Lufthansa First Class on the iconic Boeing 747-400 used to be 16 seats in the plane's upper deck - four rows in a 2-2 configuration. 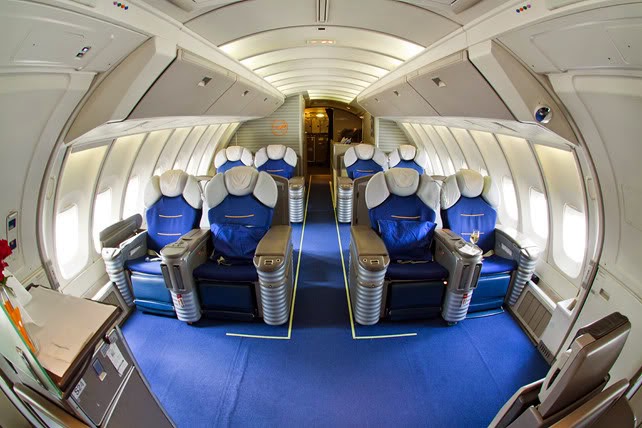 But in May 2011, Lufthansa designed to remodel its first-class offerings fleetwide. The color scheme evolved from blue and silver to brown and tan. 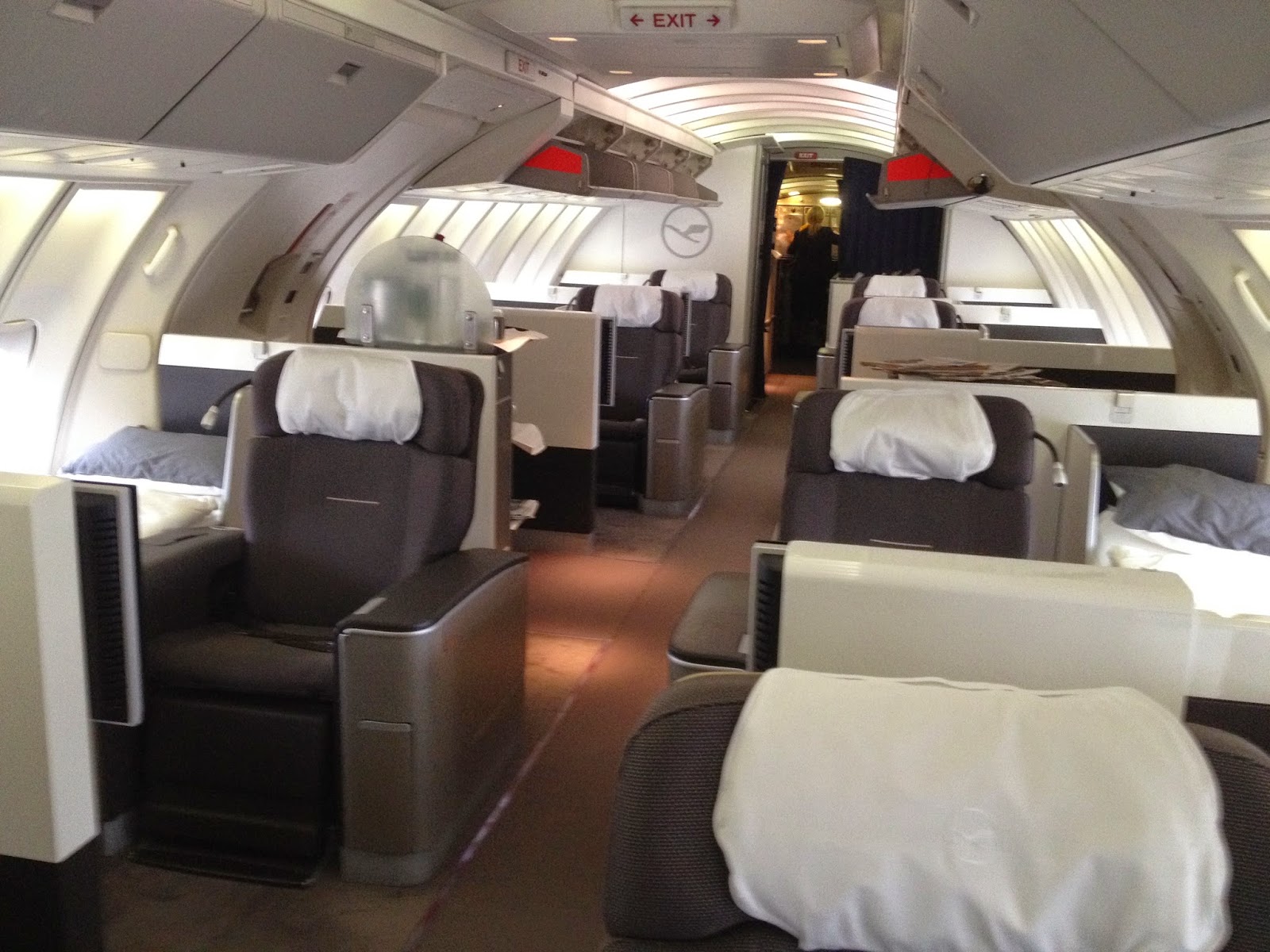 And they decided to eliminate the eight window seats and replace them with standalone beds. 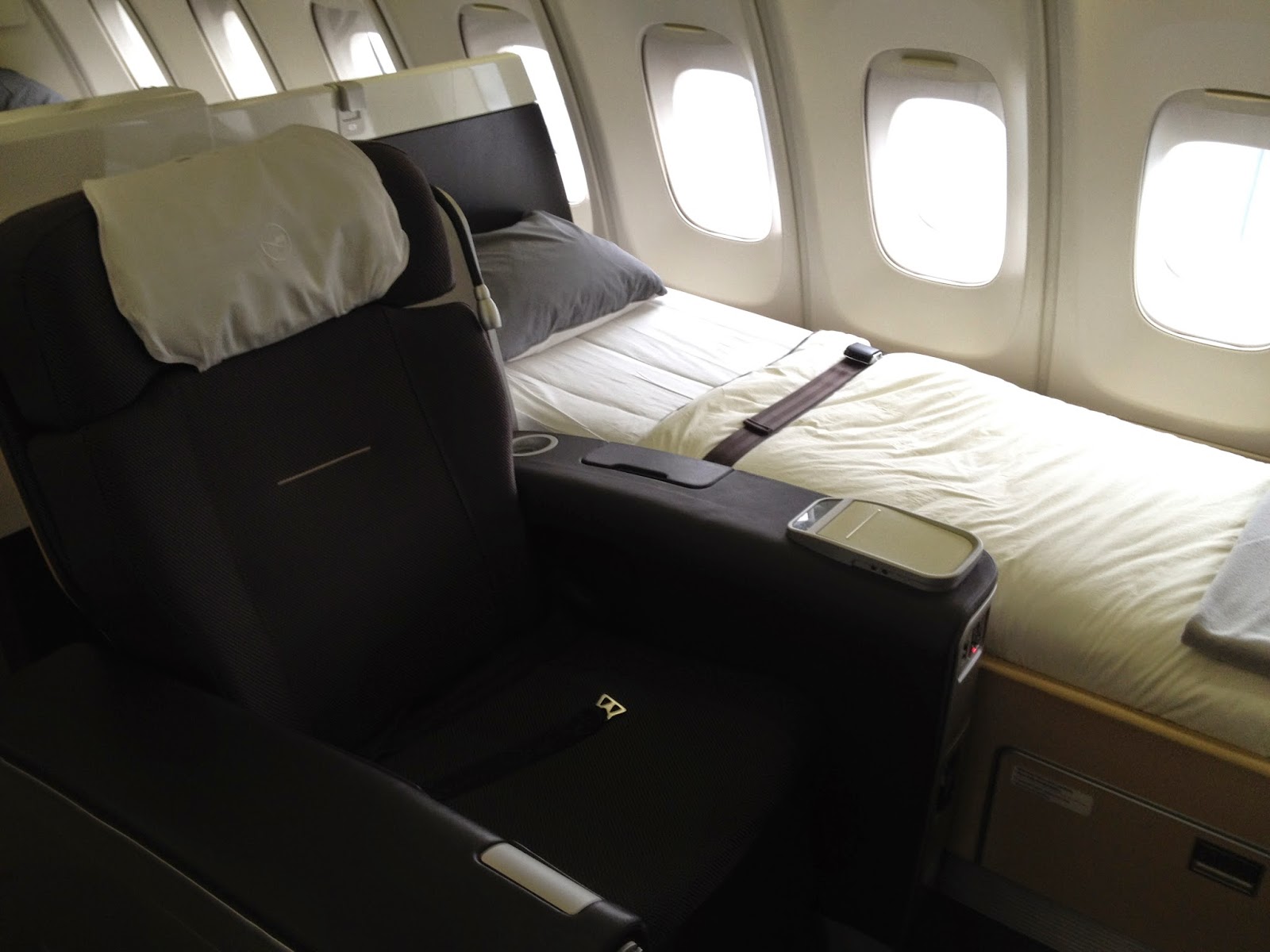 That's a relatively unique offering - as far as I know, Lufthansa is one of only three airline that offers a standalone bed (as opposed to a seat that converts into a bed) in first class (along with Etihad and Singapore Airlines's A380-800 cabins).

But enough with the history lesson. Here's the actual trip report.

After I got dropped off next to the plane in a beautiful Porsche Cayenne, the driver escorted me to Door 2L (which Lufthansa ordinarily uses for its Business and Economy Class customers on its 747-400). Door 1L is reserved for First Class customers but opens to the middle of the Business Class cabin in the nose of the plane; Door 2L is next to the stairs leading to the First Class cabin on the upper deck. 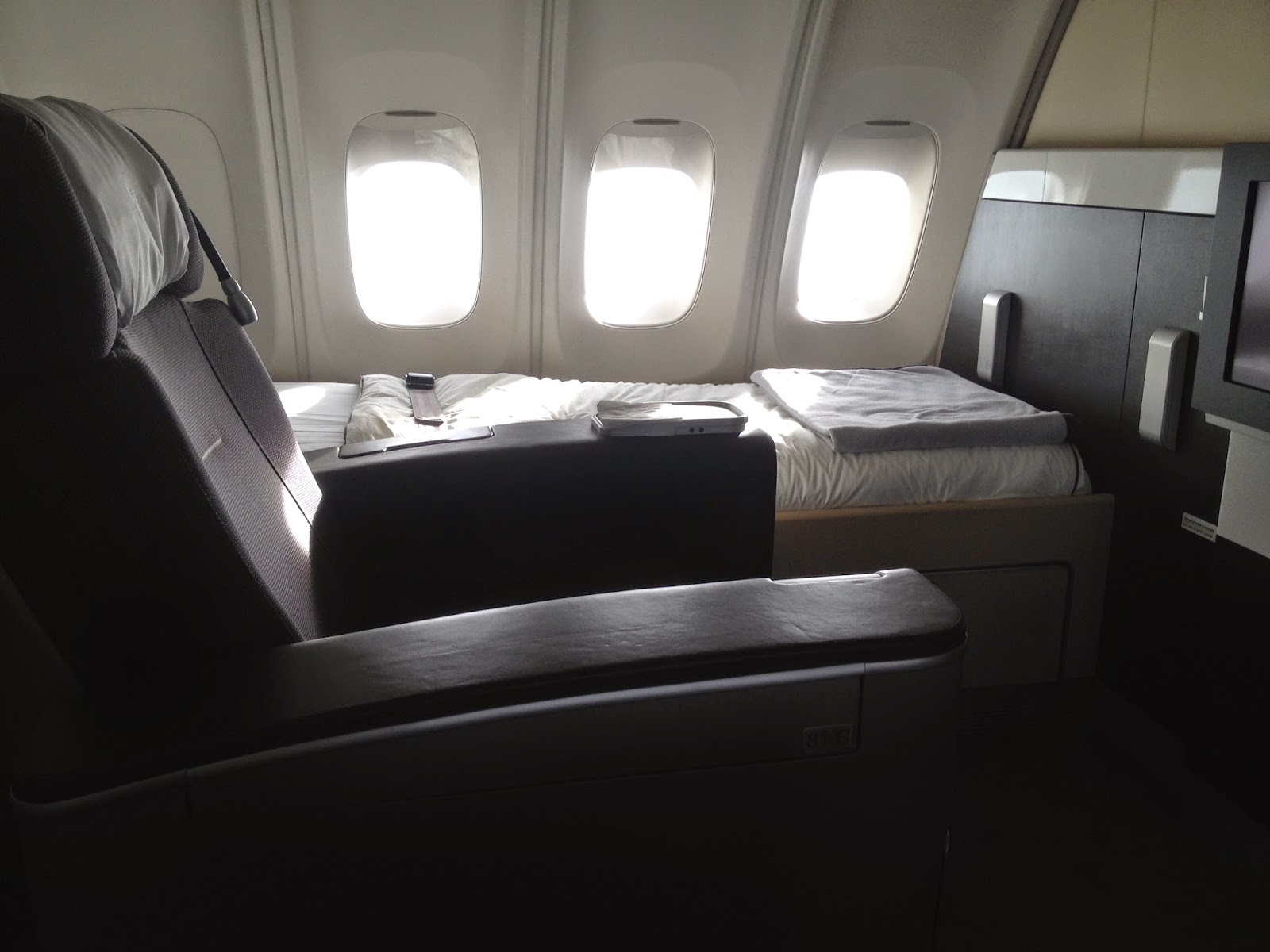 I was one of three passengers on the flight to Vancouver; the other two were (I think?) an American couple who boarded together, although they were connecting to different destinations (Portland and Seattle). They slept through most of the flight.

Unfortunately, the normal Lufthansa red roses were not present on this flight, which made the cabin feel a little less homey. 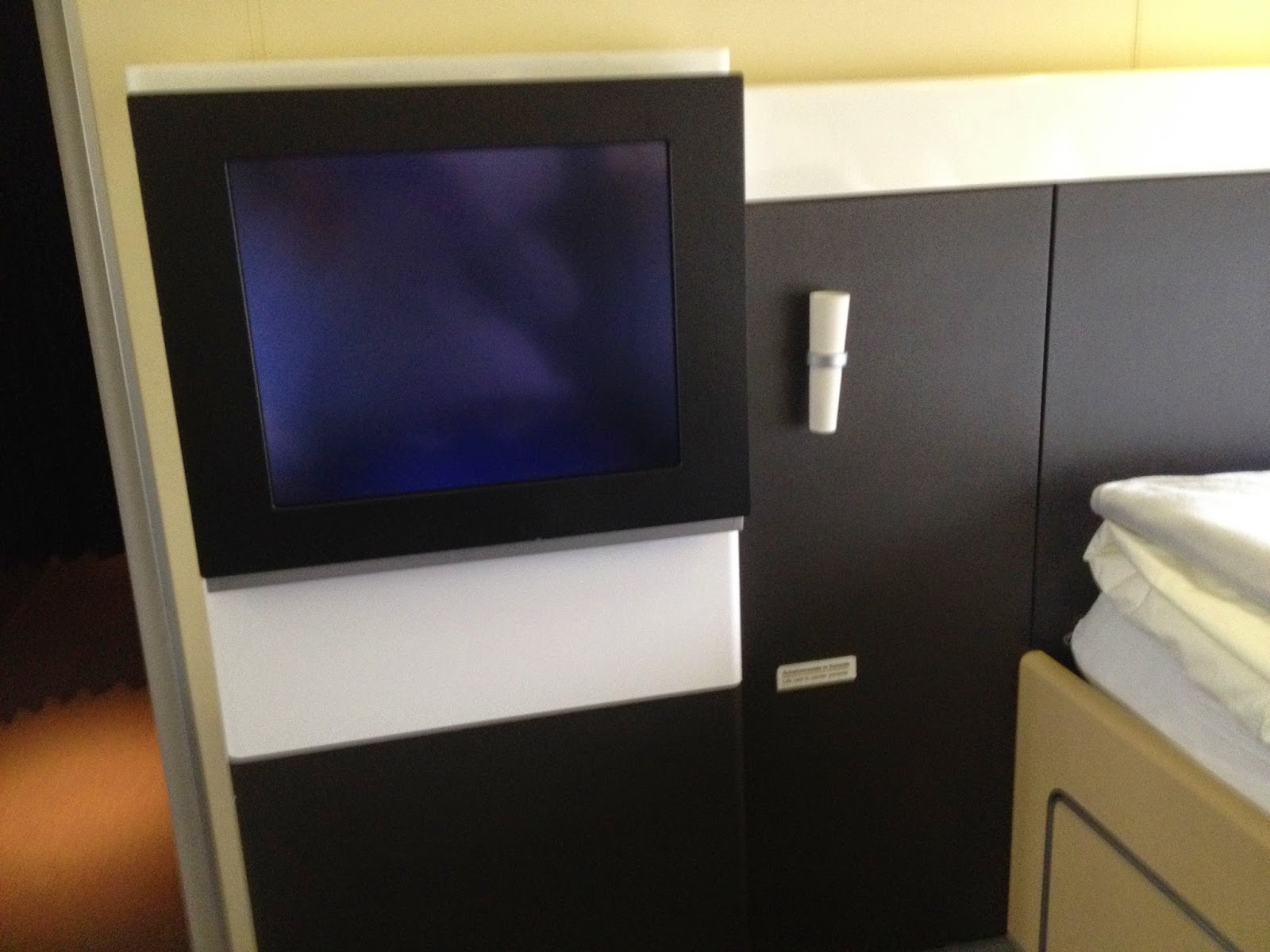 The seats are well designed with intuitive controls and ample storage. There's also a generous storage bin underneath the bed, although it's a bit too small to fit a rolling carry-on. 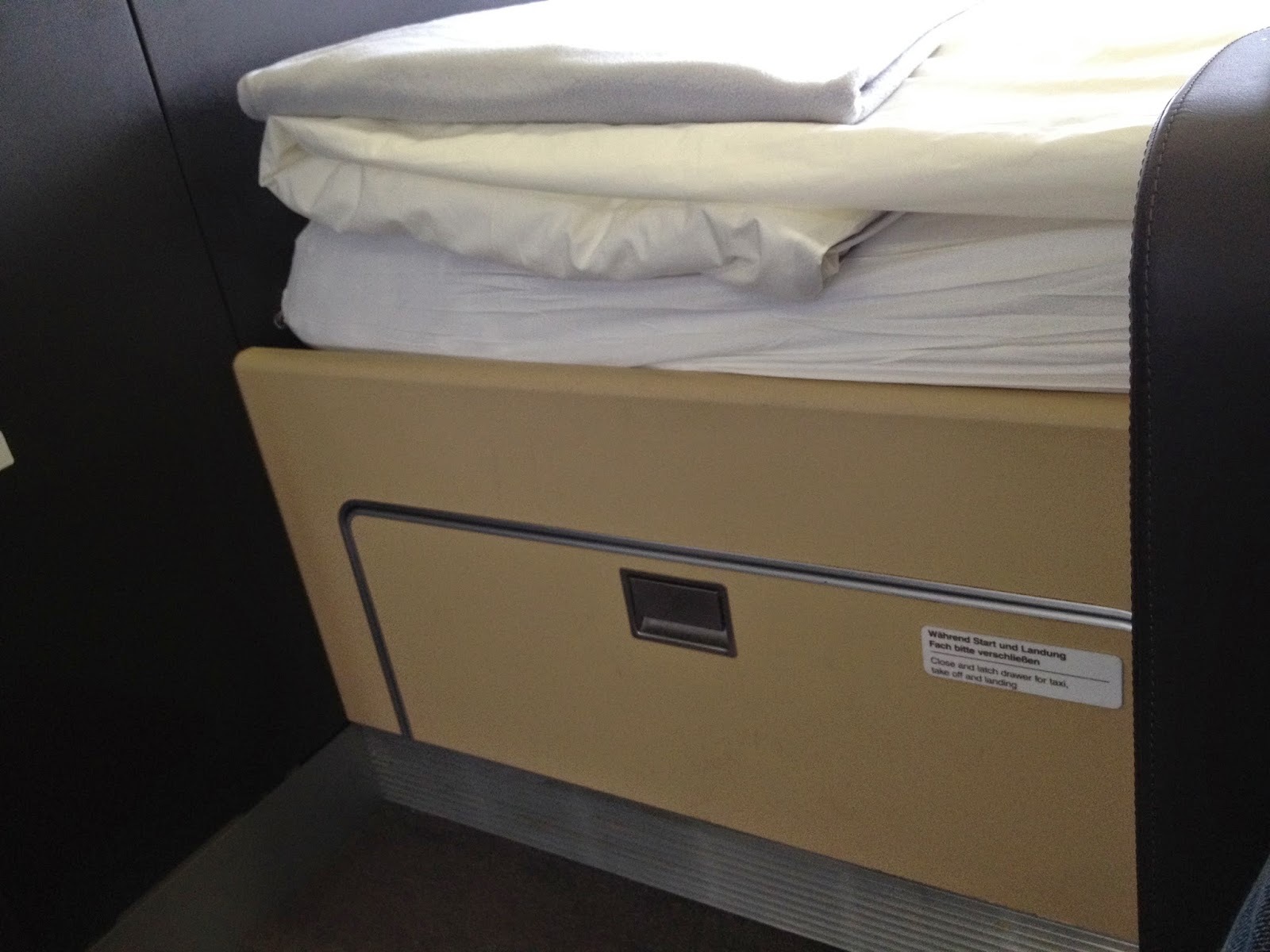 Although the cabin has overhead bins, I don't think they get much use. As we boarded, the staff told us to put our rolling carry-on bags in a closet next to the rear galley of the upper deck (there was easily enough space for a full First Class cabin to place all their bags).

On past Lufthansa trips, I've gotten the sense that the German-speaking customers get better service because the flight attendants (understandably) feel more comfortable speaking their native language. The service is never bad - it's just a bit of warmth that seems missing.

But that wasn't the case on this flight. A young woman named Lika was the head flight attendant for the First Class cabin, and she was as nice as can be. She spoke (at least) flawless German, English, and French and spent a few minutes talking to each passenger as she took pre-departure drink orders. 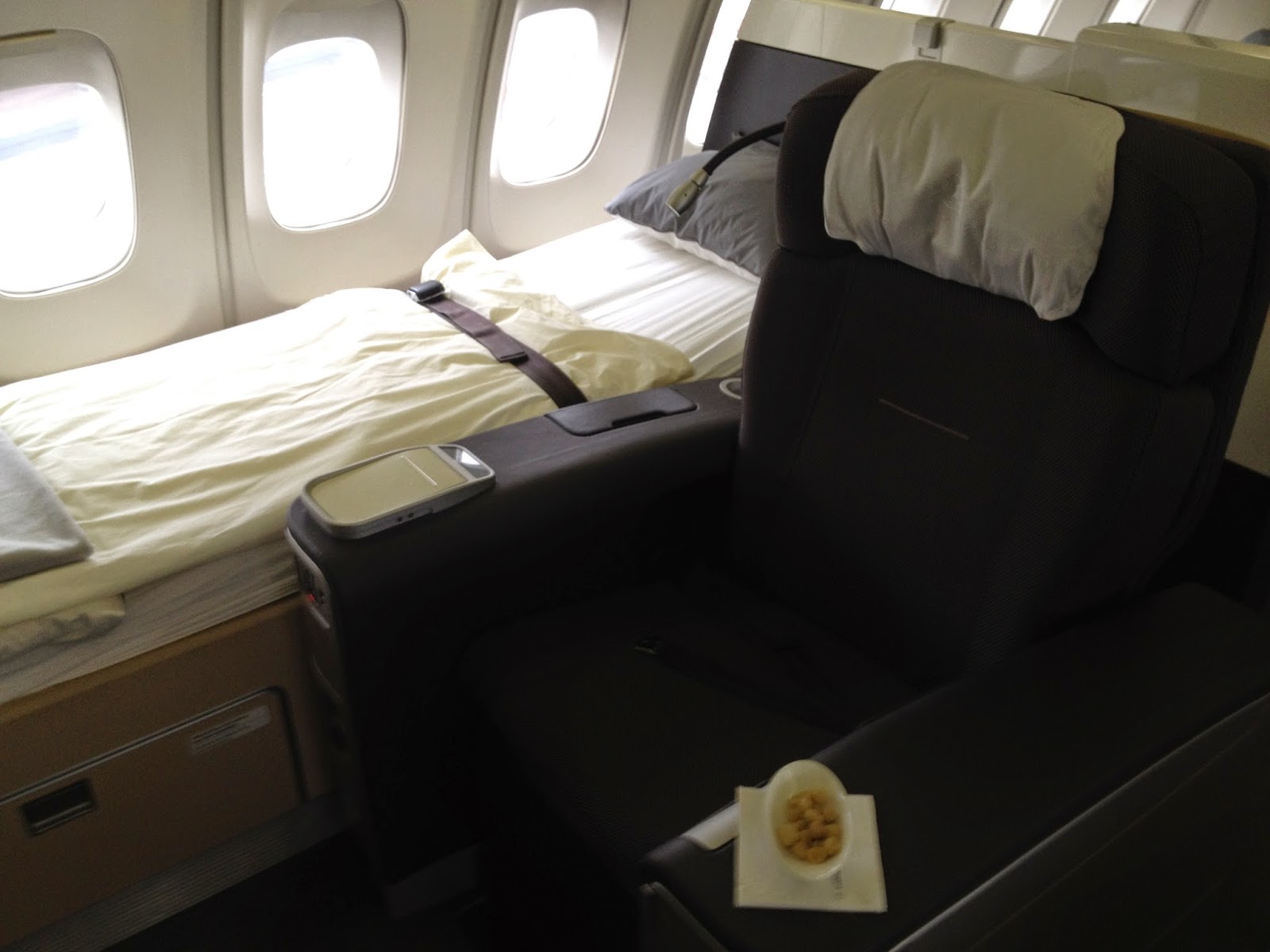 Pre-departure macadamia nuts (in a bowl, not a bag) 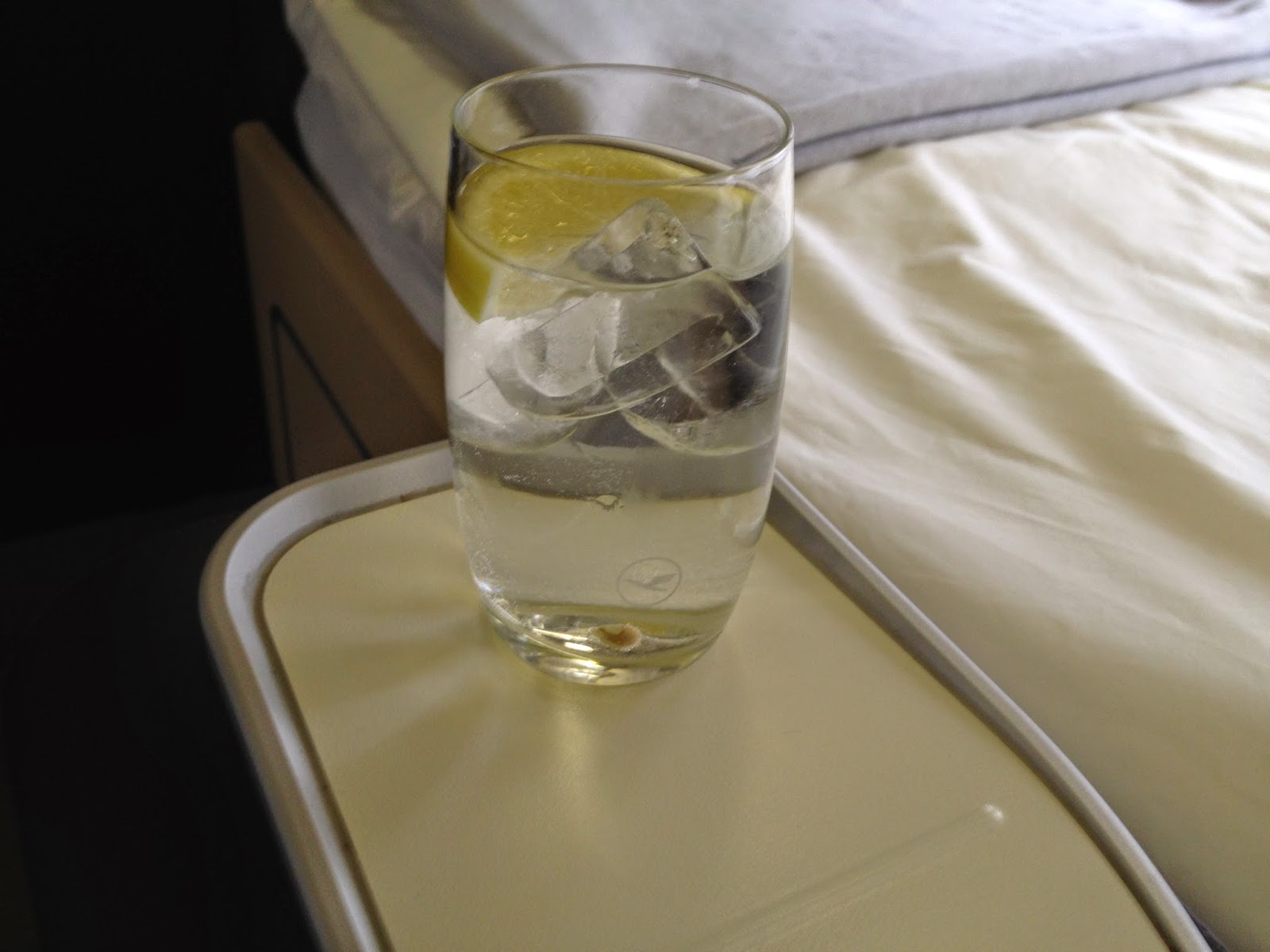 Shortly before takeoff, Lika distributed amenity kits (another fancy-pants Rimowa kits, although in a different color from my previous flight), slippers, and pajamas. 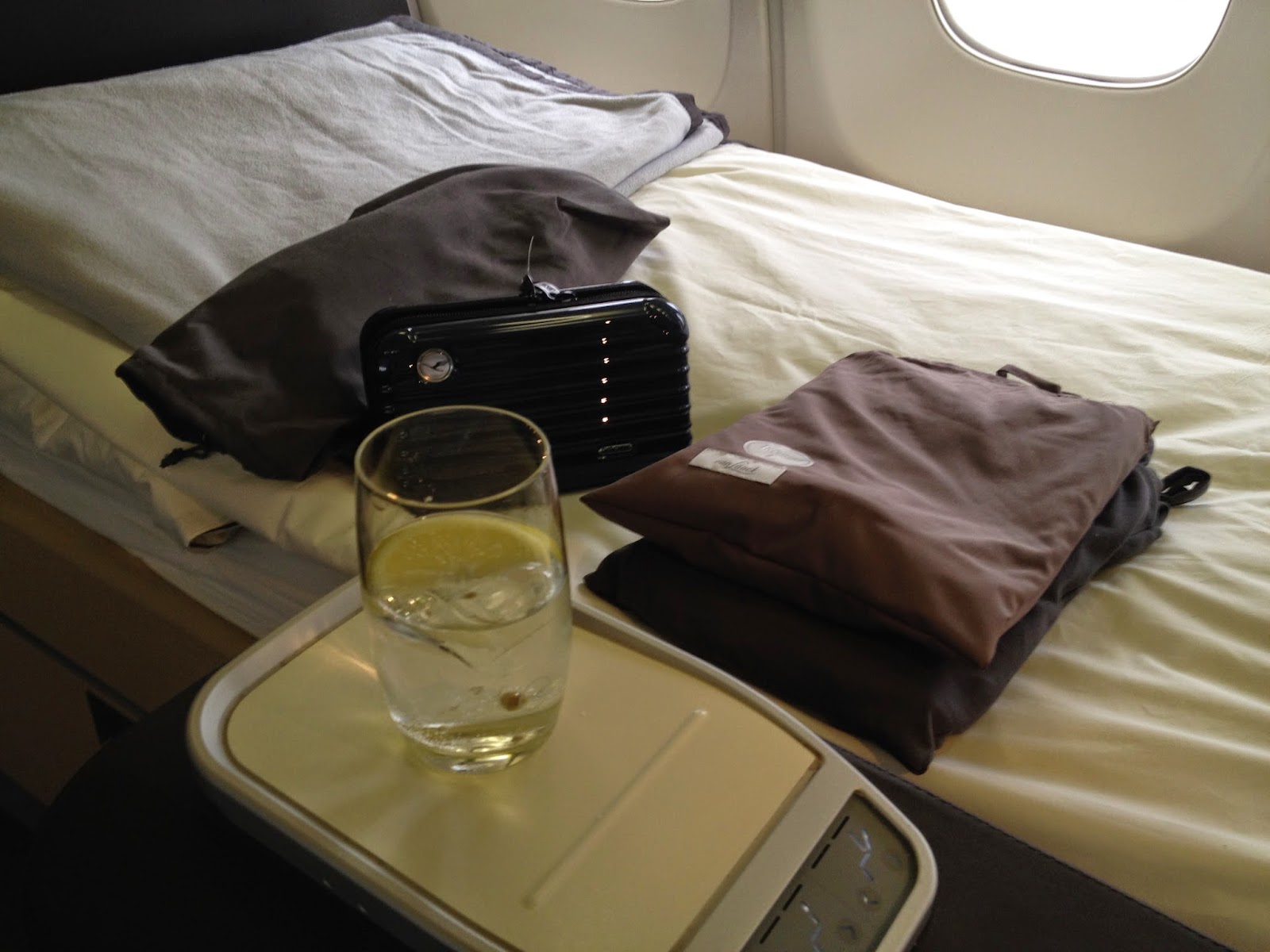 Those are the pajamas on the right - you may notice that they're different colors. That's not just the photo - the pajama pants are thin (they look and feel like scrubs) and reddish grey; the top is much thicker and dark grey. Singapore's pajama pants look and feel considerably more luxurious than the Lufthansa ones. But Lufthansa's top is much better designed than Singapore's and is roughly the same color as the Singapore pants - that's now one of my favorite lounging outfits at home.

Immediately after takeoff, the purser (a very nice guy whose name escapes me) distributed menus.

Caviar from Service Cart
Caviar with the Traditional Garnishes

The meal started with an interesting amuse bouche. I think it's supposed to look like tuna sashimi with a dollop of wasabi on a bed of seaweed - it's actually watermelon with avocado cream, sour cream (creme fra^icirc;che?) and a sweet chutney. 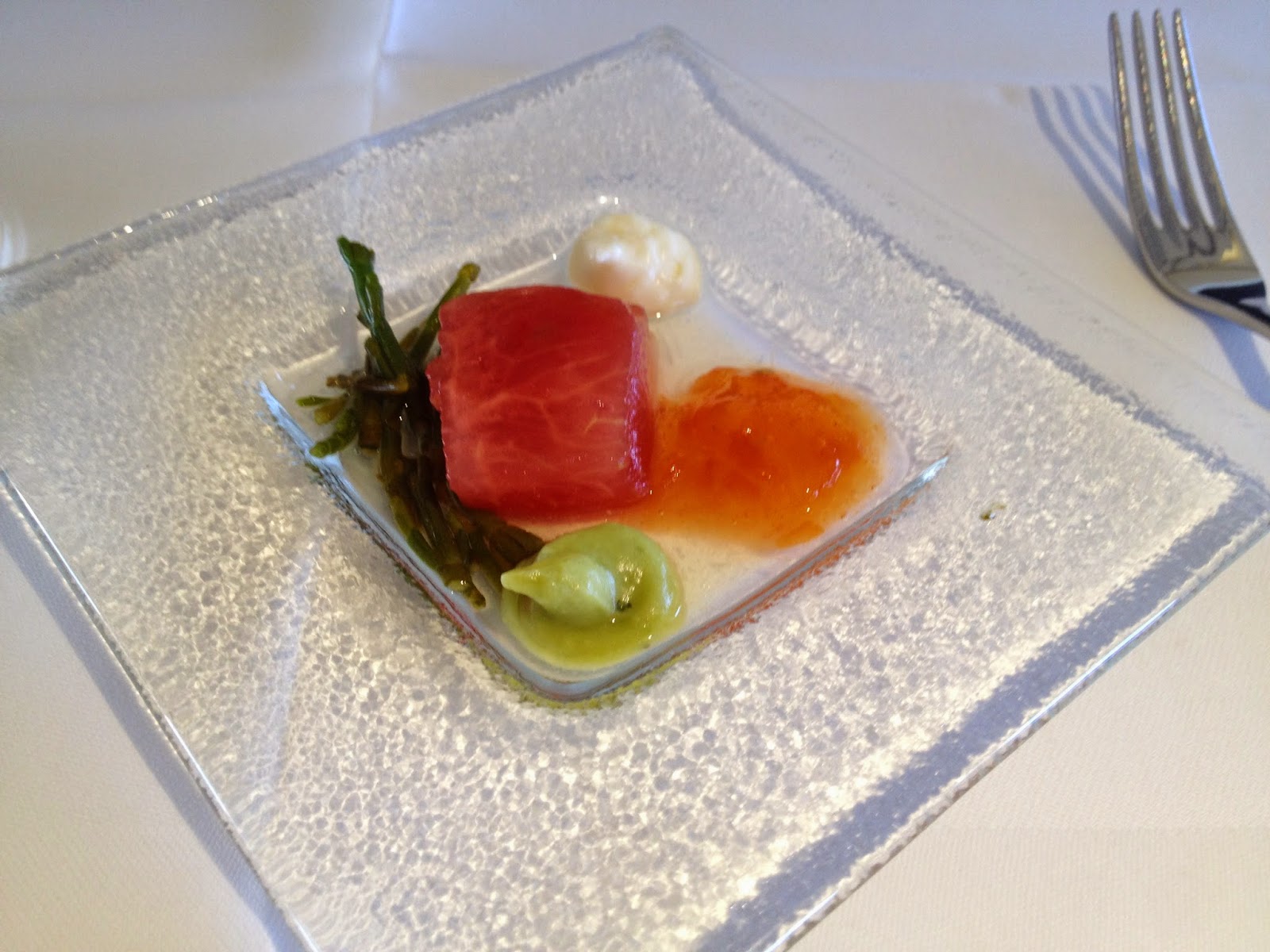 
Then there was a bread service - I got a slice of the delicious Lufthansa garlic bread. 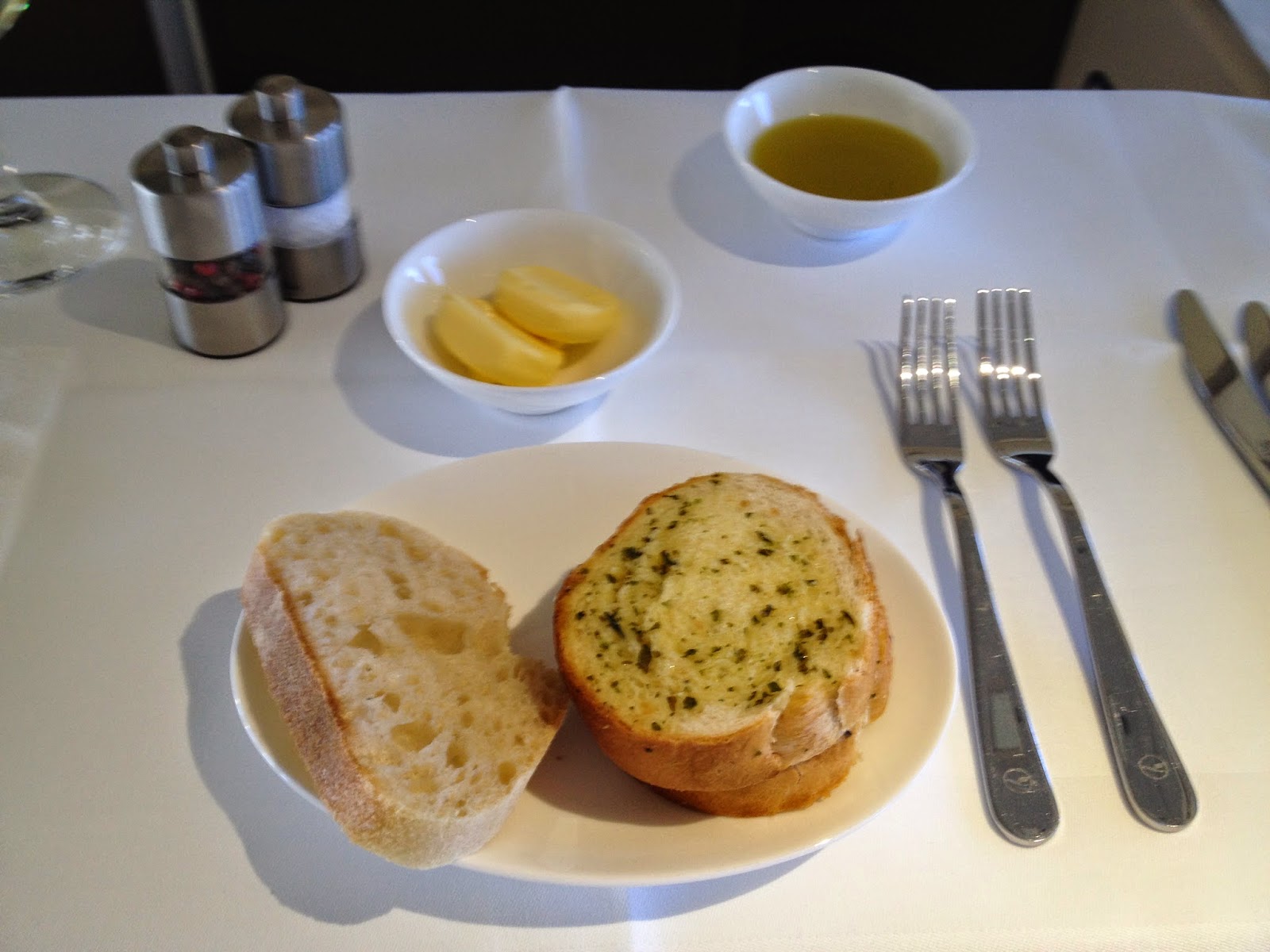 On flights departing from Frankfurt, the butter is emblazoned with the words "First Class." Over the top, but kind of cool. 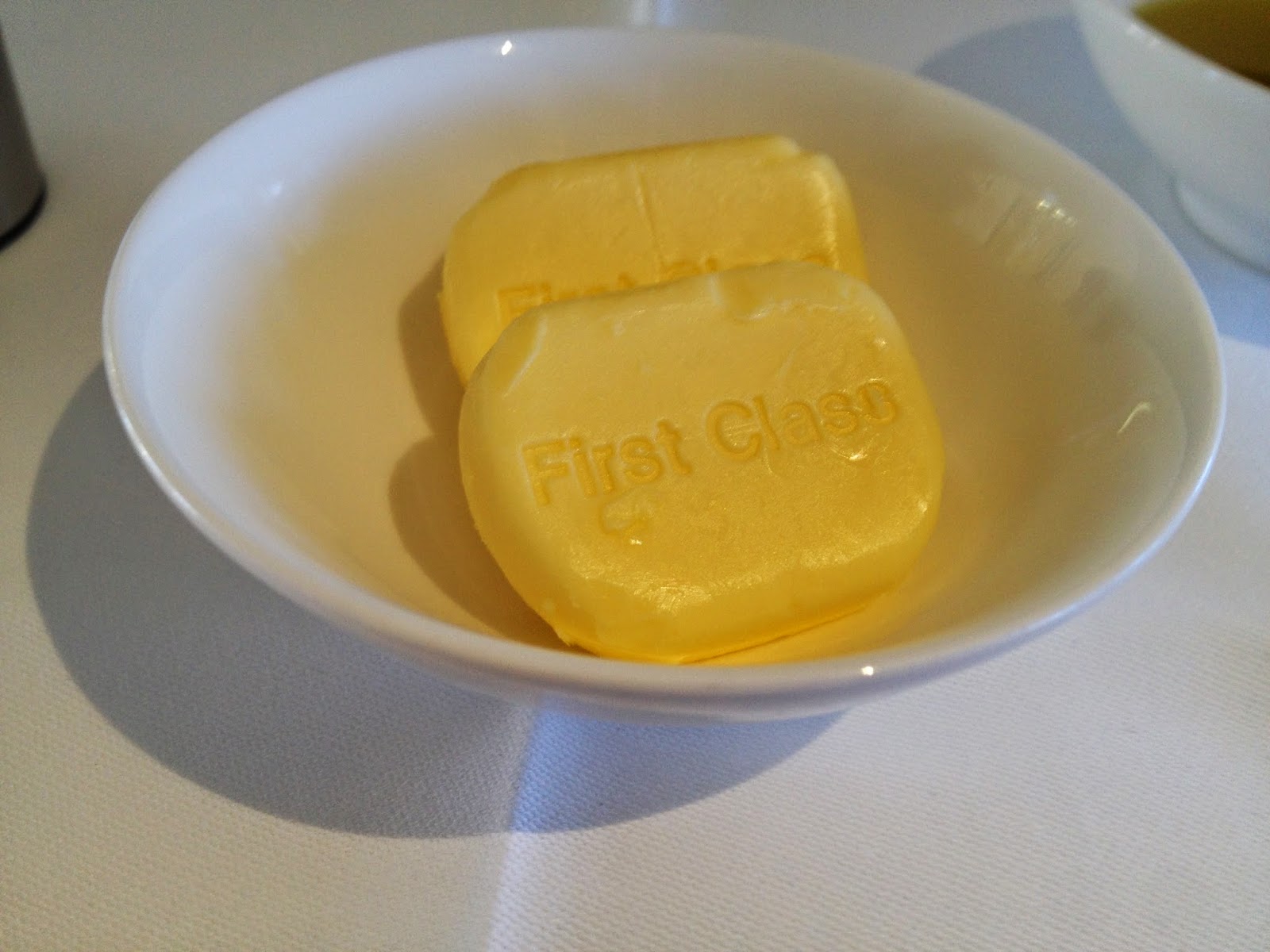 The meal proper began with a generous serving of caviar. 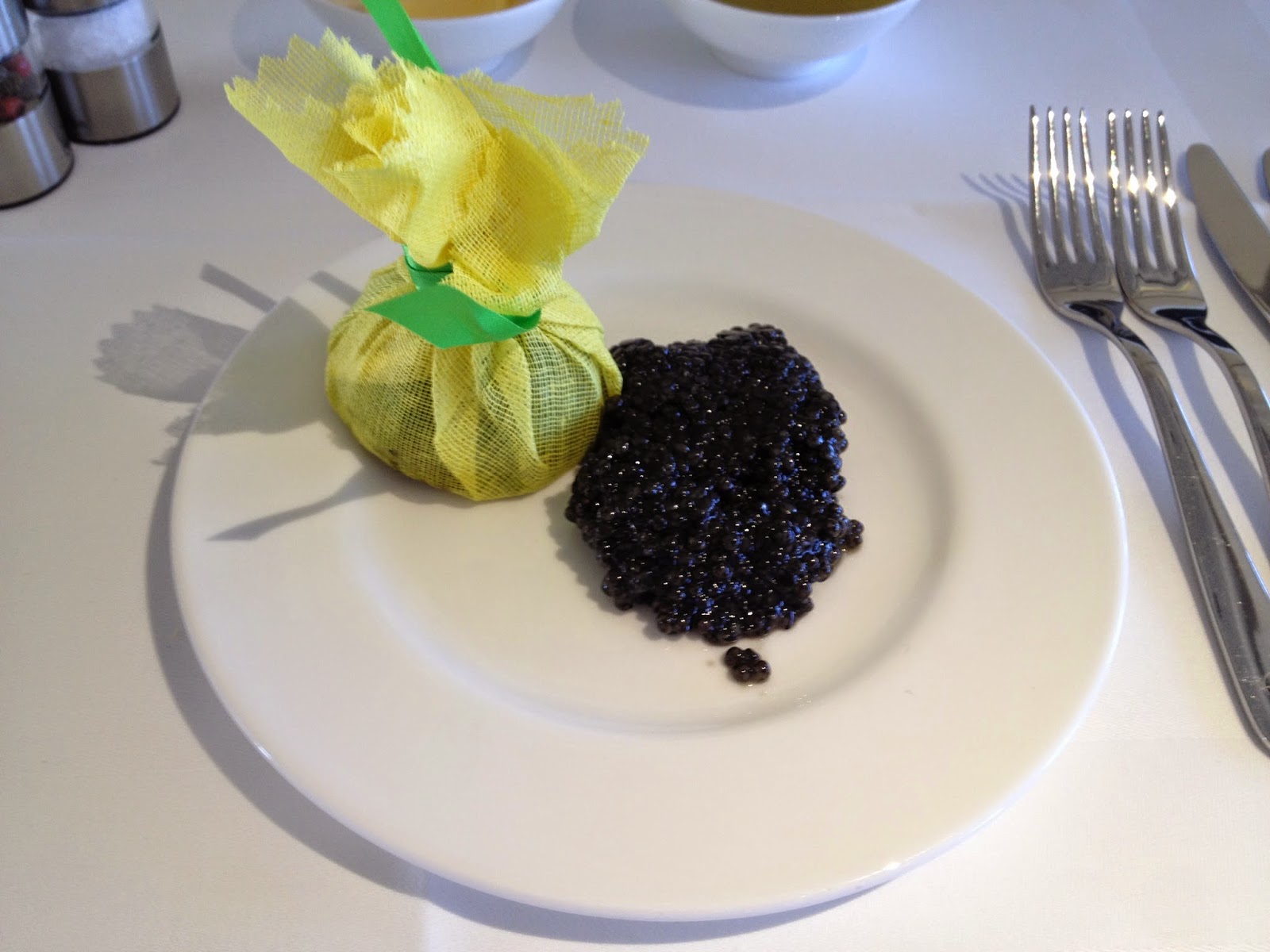 As Lika brought out the egg white / egg yolk / sour cream garnishes, she offered another round of bread. I was about to take a pass, but Lika helpfully suggested that the toast would go well with the caviar. 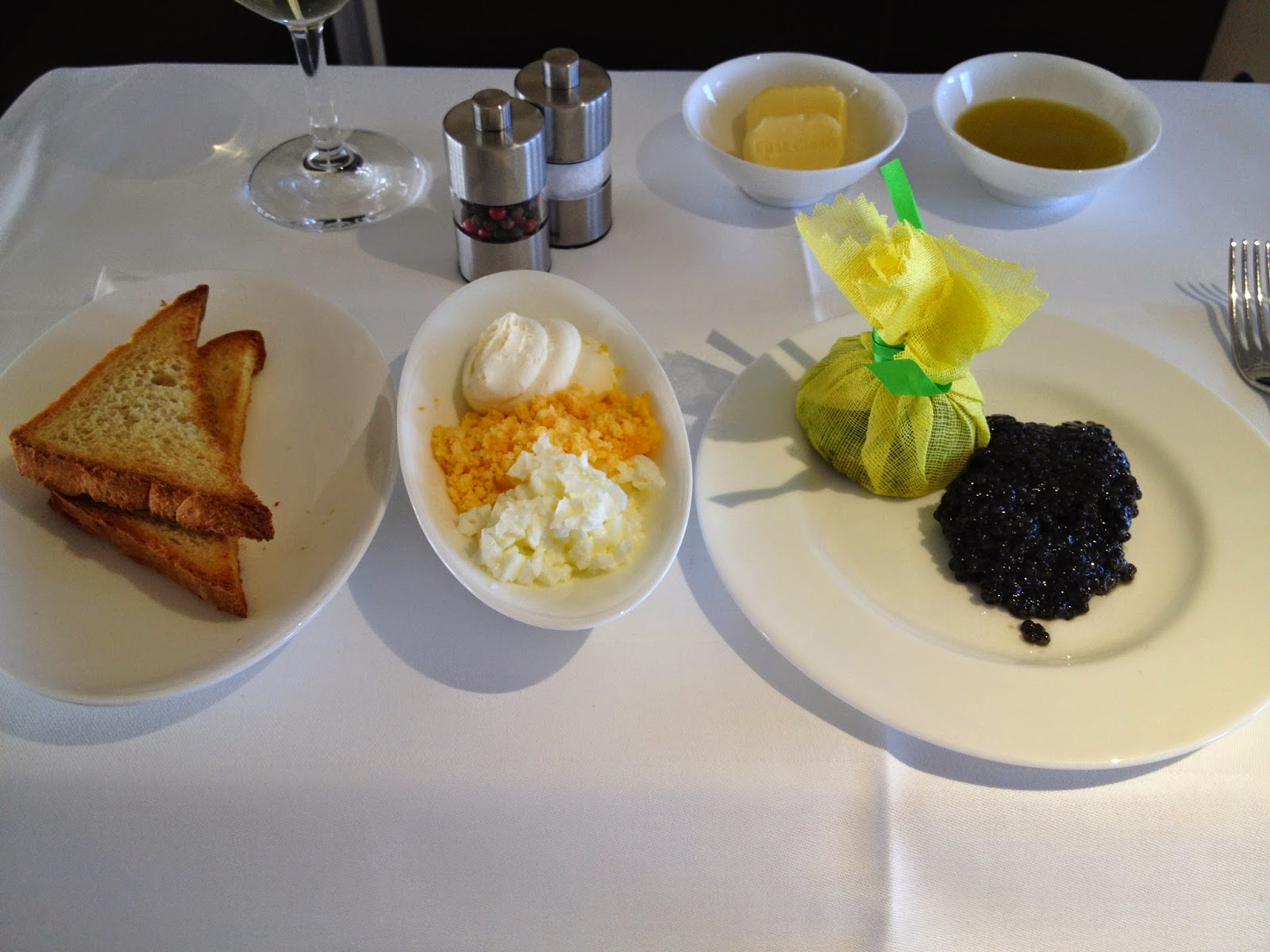 
And did you see those salt and pepper grinders? Fancy. (They came with the airline name facing outward - excellent attention to detail!) 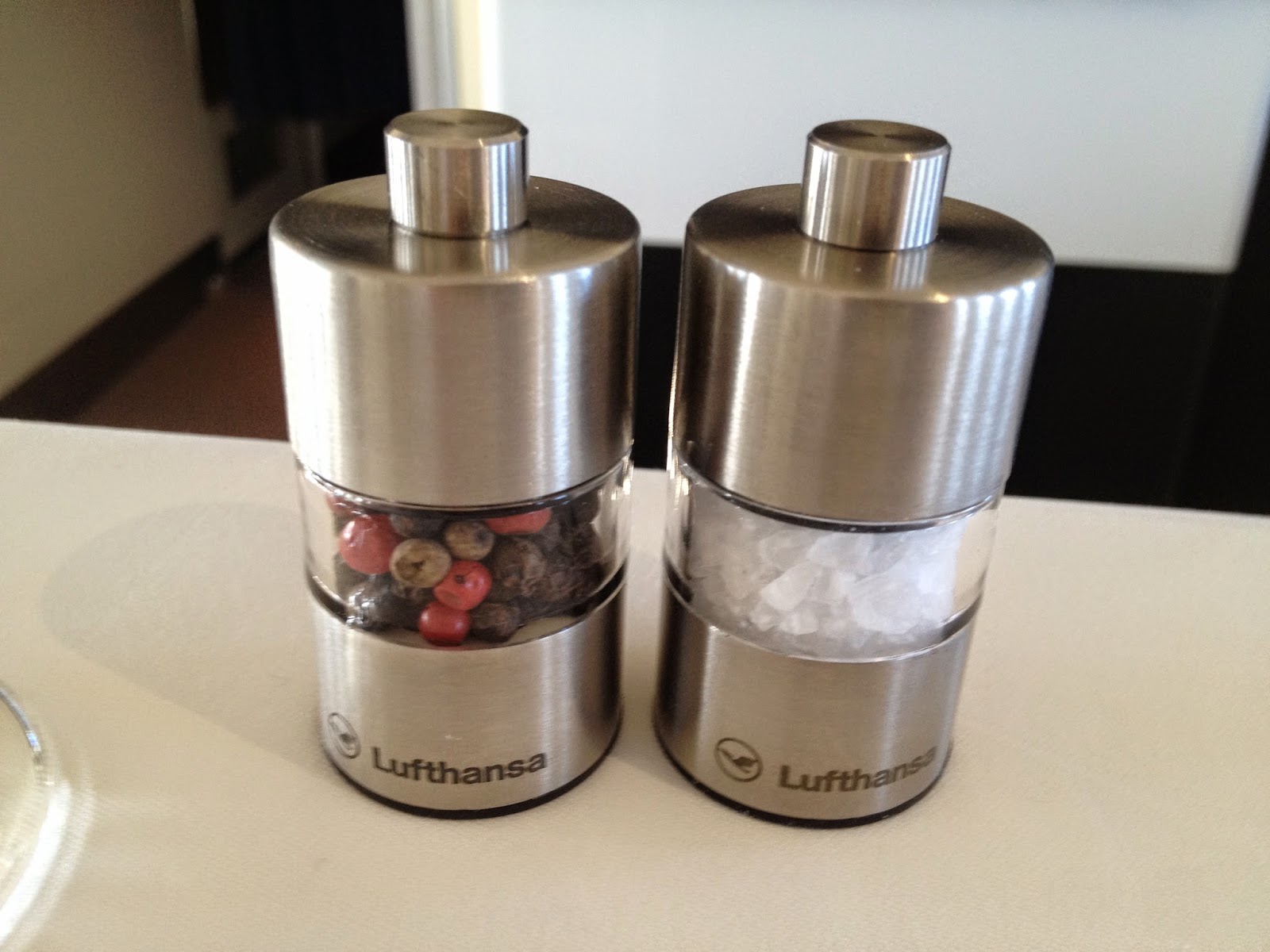 Full of good and valuable consideration

Lika came around with an appetizer cart. Everything looked delicious, so I decided to them all. 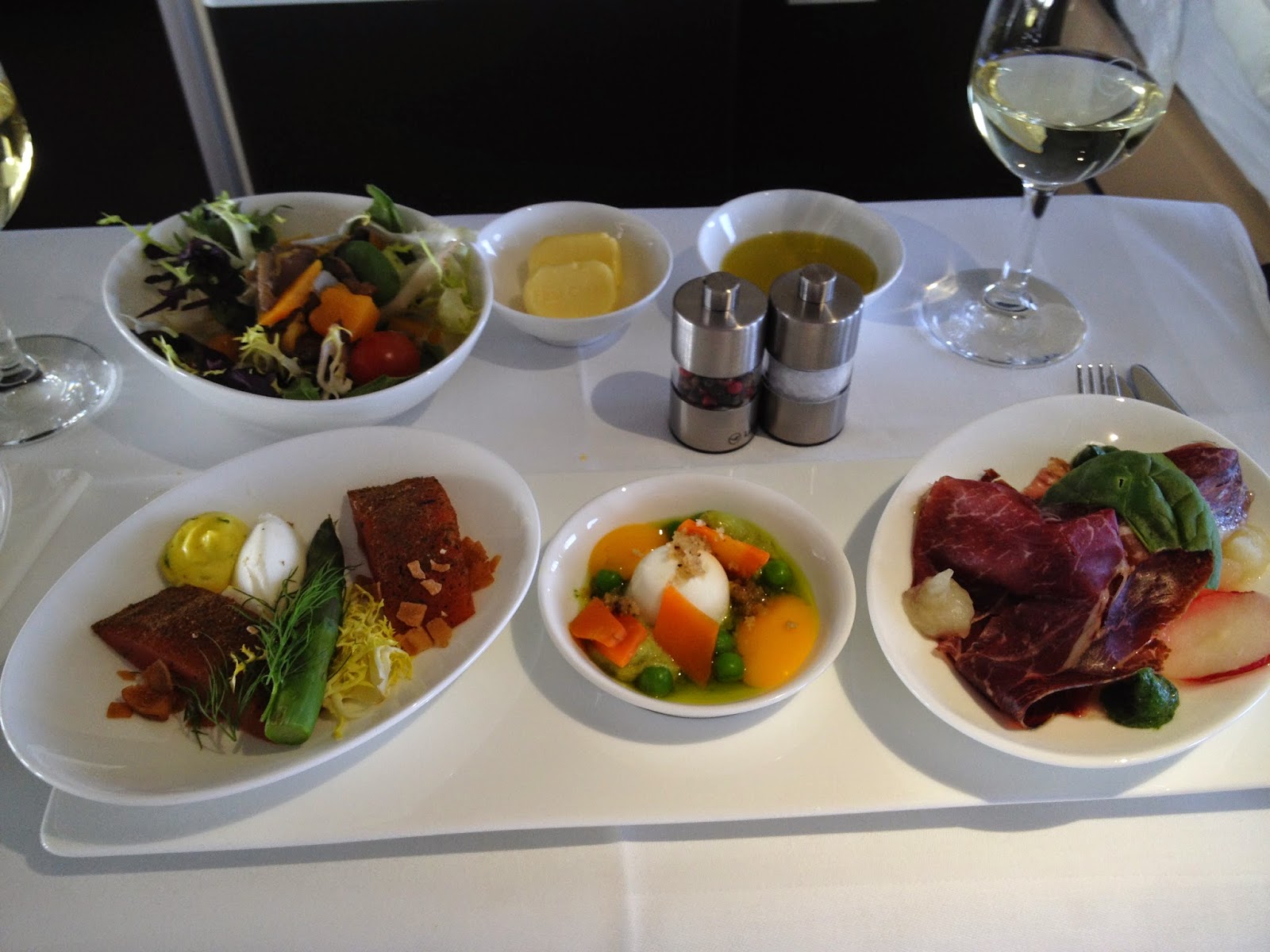 The salad was spectacular, especially the pumpkin. 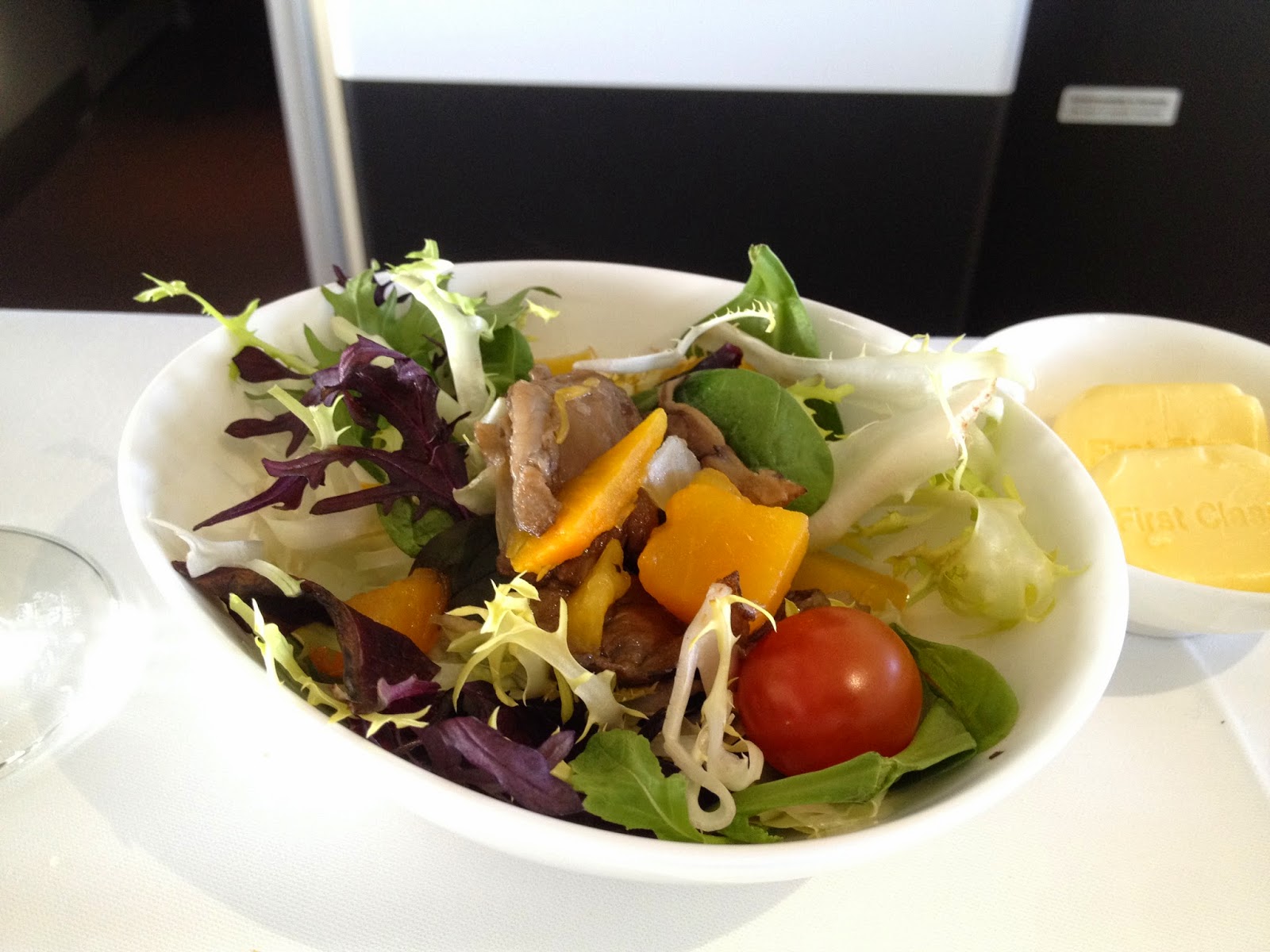 The salmon was pretty dry - I left most of it. The coconut foam and toasted coconut were the best part of the dish. 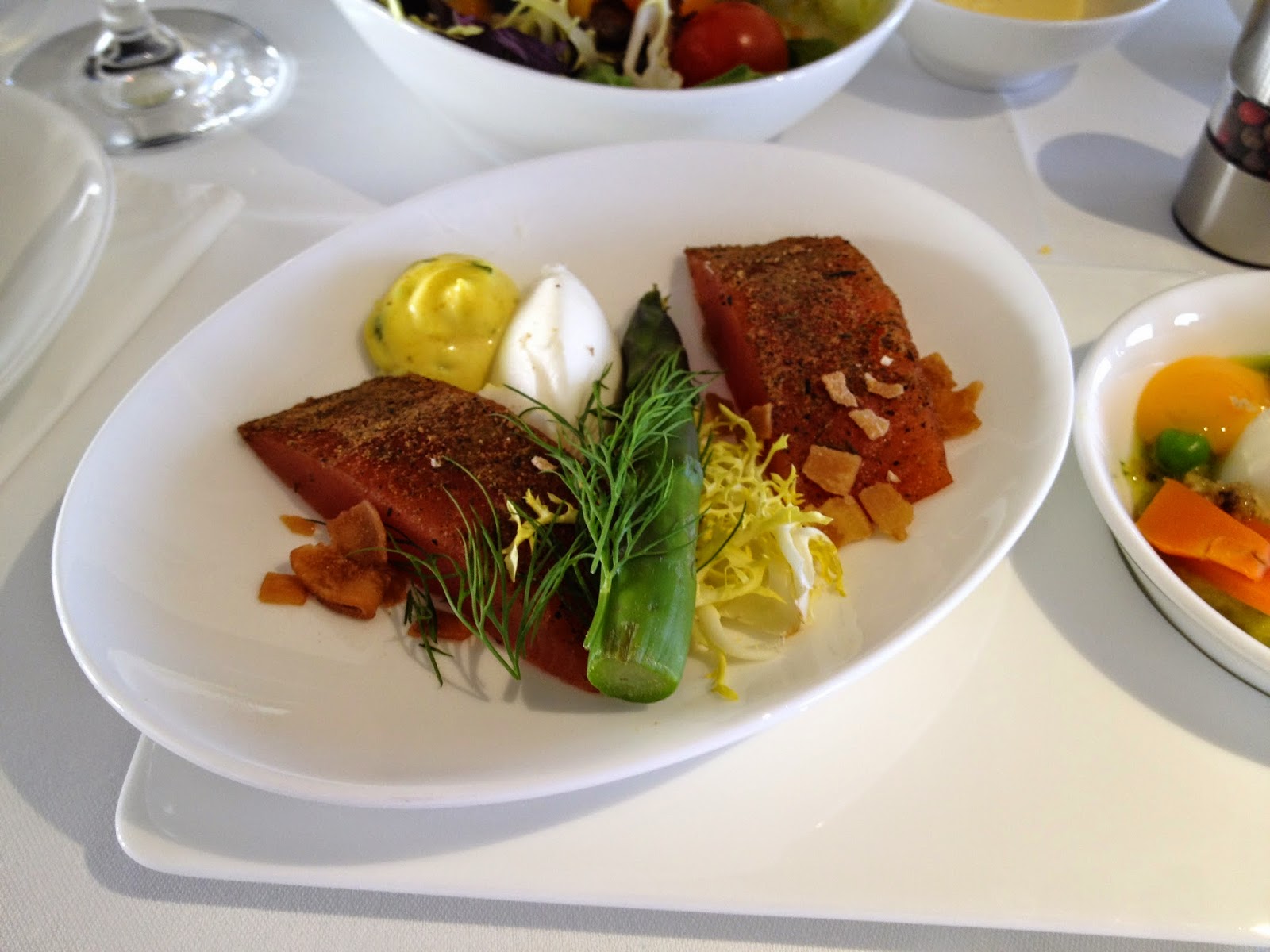 The yogurt mousse combined lots of different flavors and textures - fun to try, but probably not worth finishing. 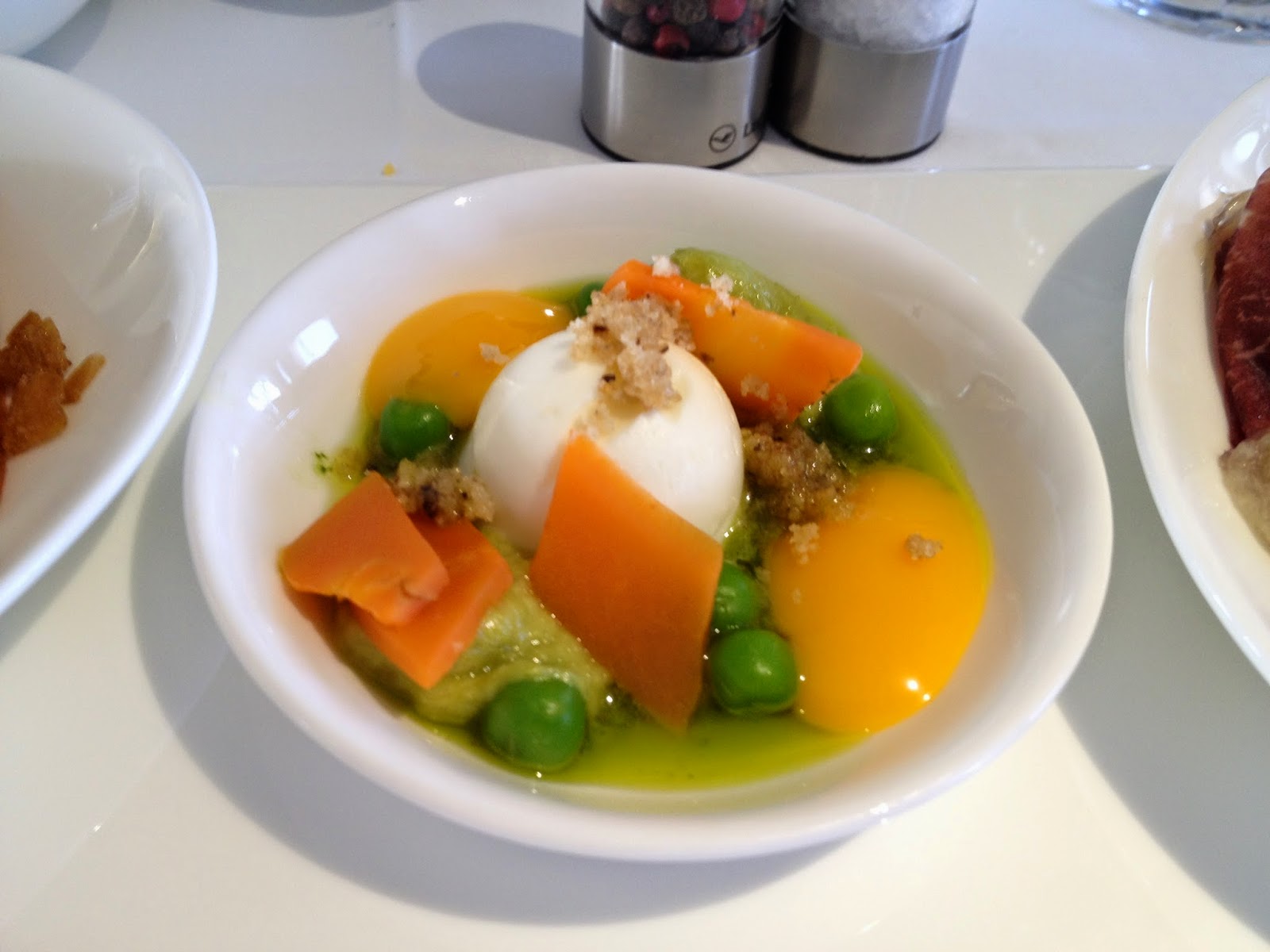 The best appetizer was the dried beef, complemented well with a salsify-grapefruit puree. Unfortunately, the sauce that looks like a pesto was actually a spinach paste, which is as unappetizing as it sounds. 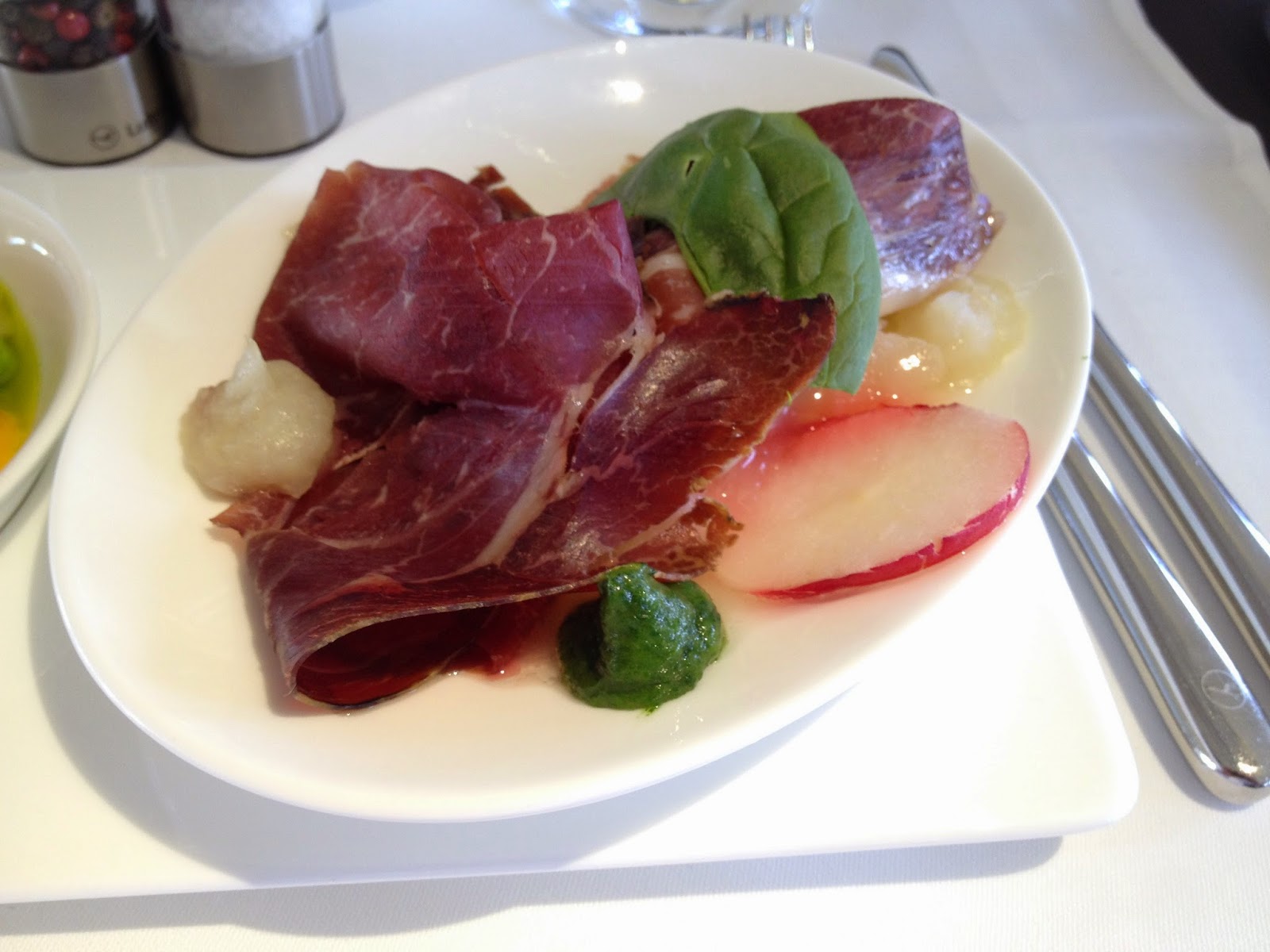 The soup course came next - this is my favorite soup of all time (and I've had a lot of soups). It's a cinnamon-flavored tomato soup with pieces of duck and croutons inside. It's rich, earthy, and very tart. 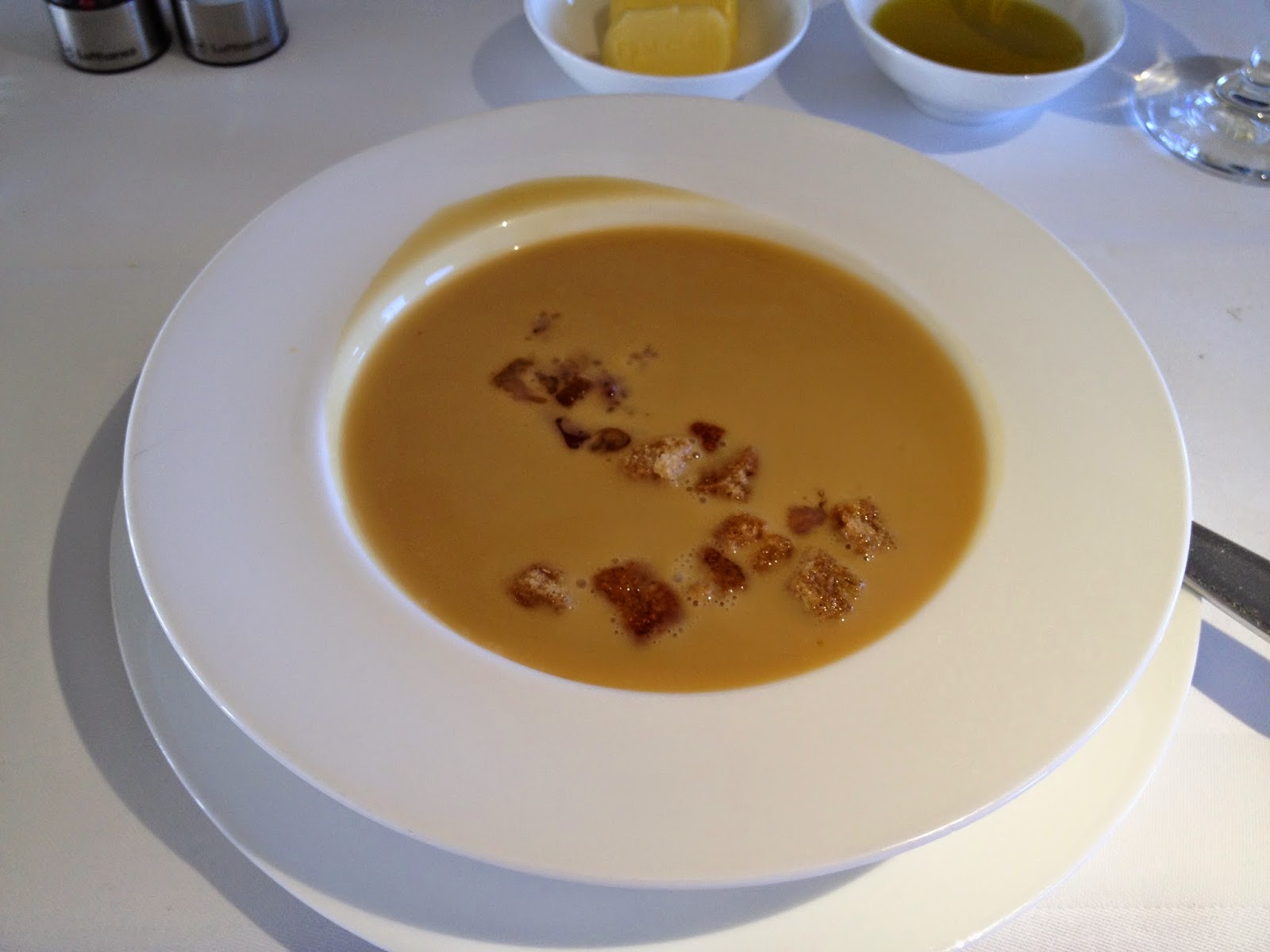 The best (and brownest) tomato soup ever

So far, a superlatively good meal. But I made a mistake with the main course. 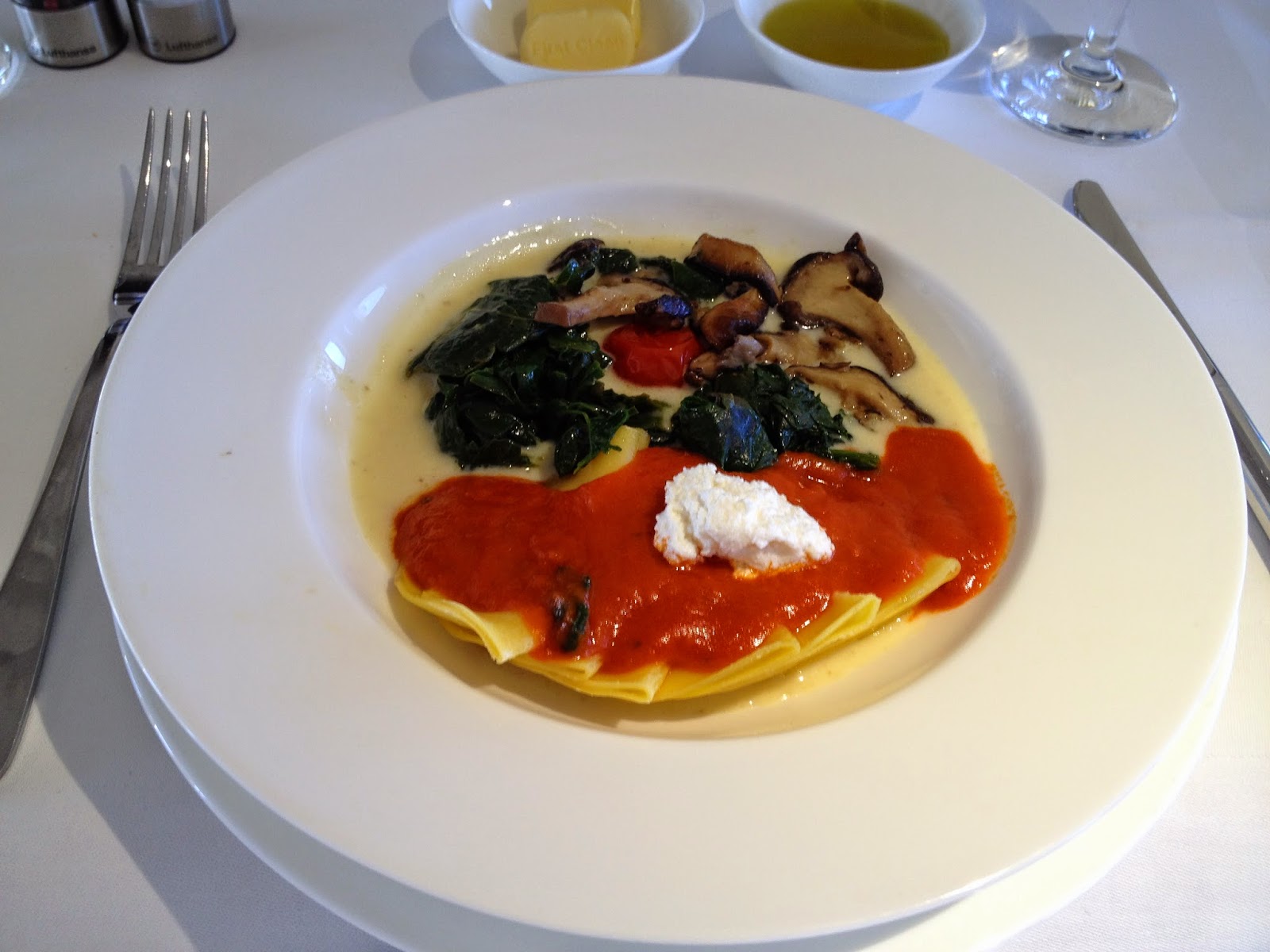 The pasta was undercooked; the spinach was soggy; the sauce was way too rich and tasted like an awful polenta. I left this mostly untouched (and was glad I had loaded up on the appetizers).

I ordered this bizarrely delicious dessert: 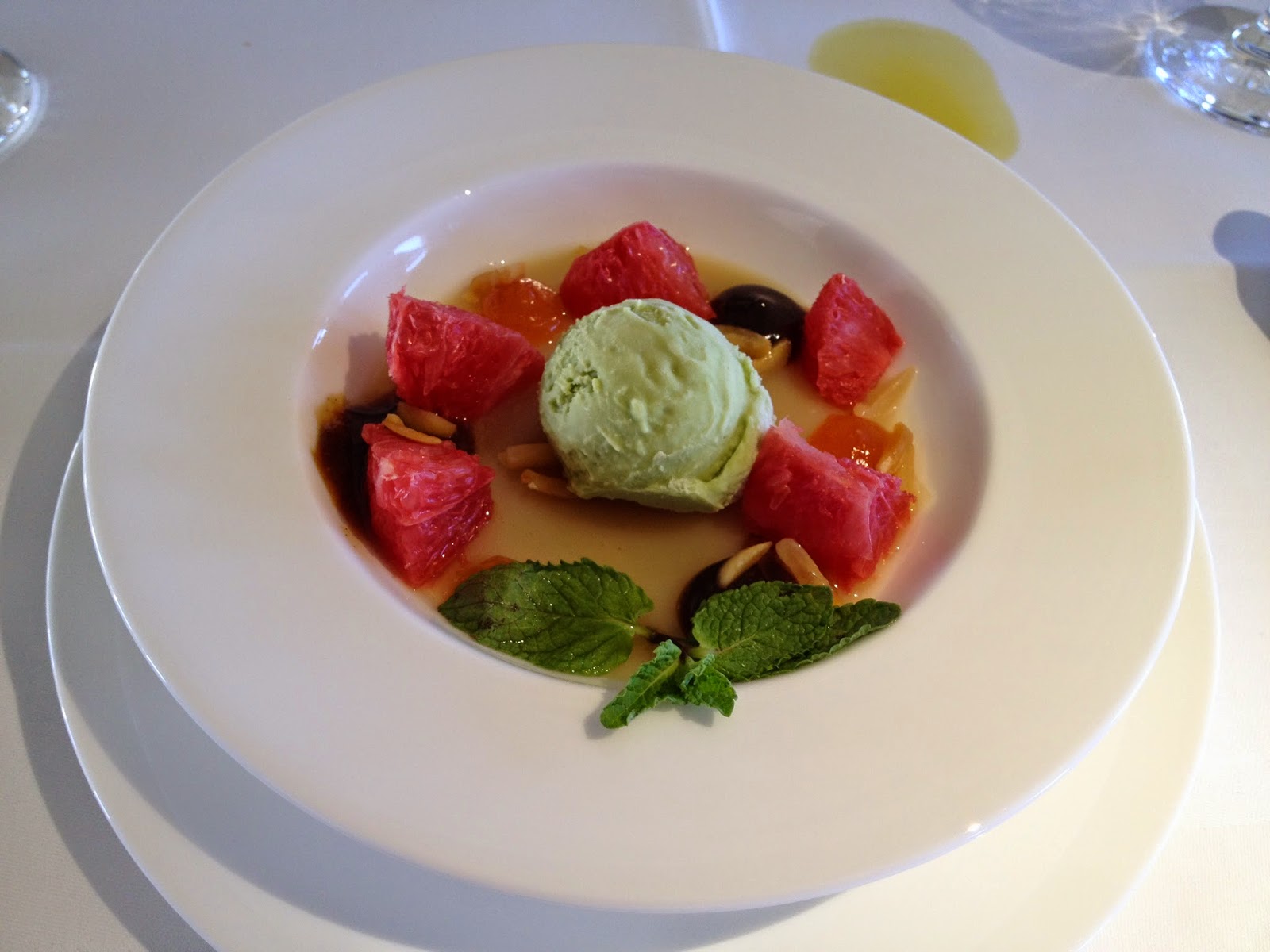 And to finish the meal off, Lika came around with an enormous box of pralines - I tried two... 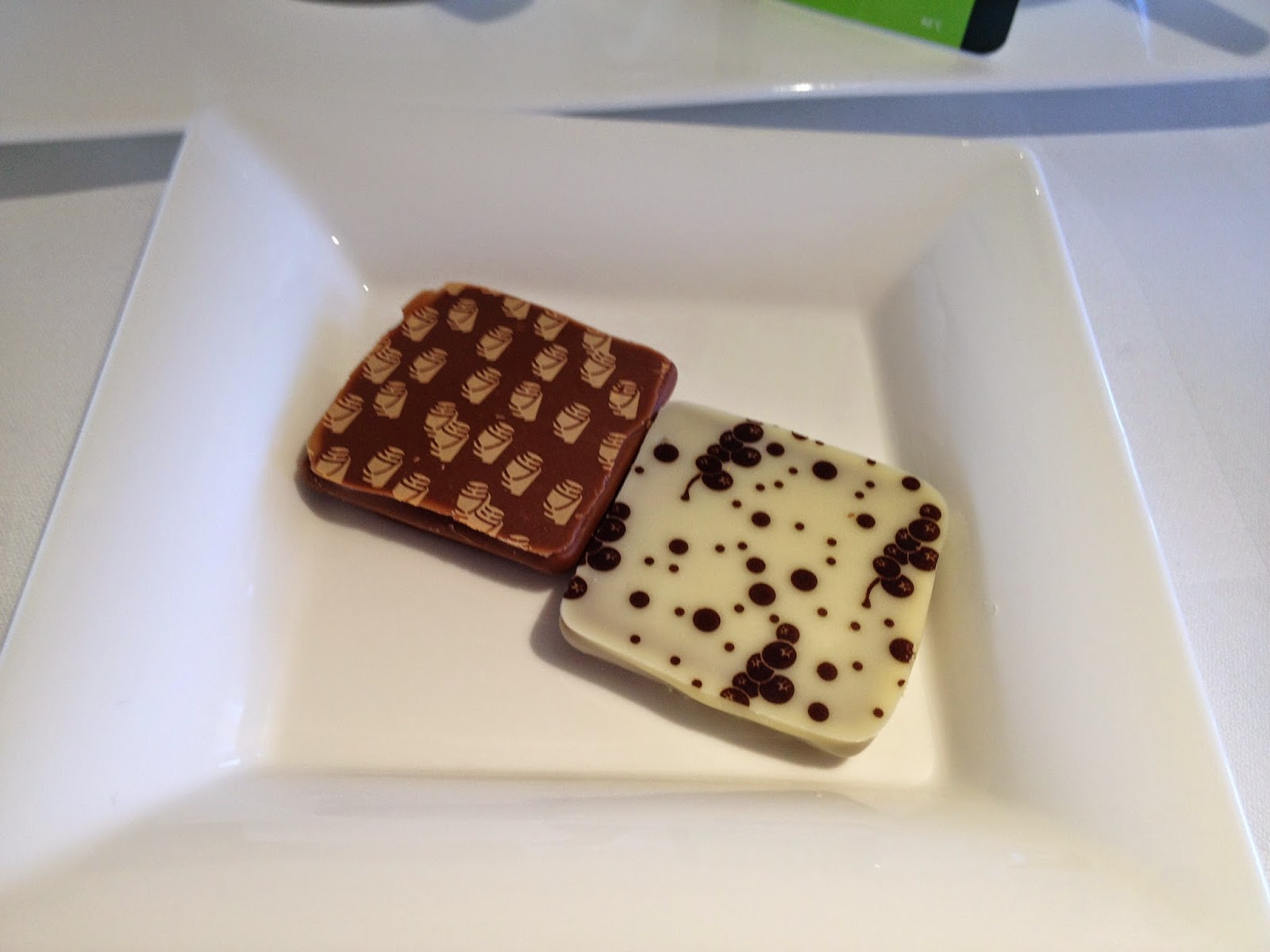 ...  which I enjoyed with some green tea. 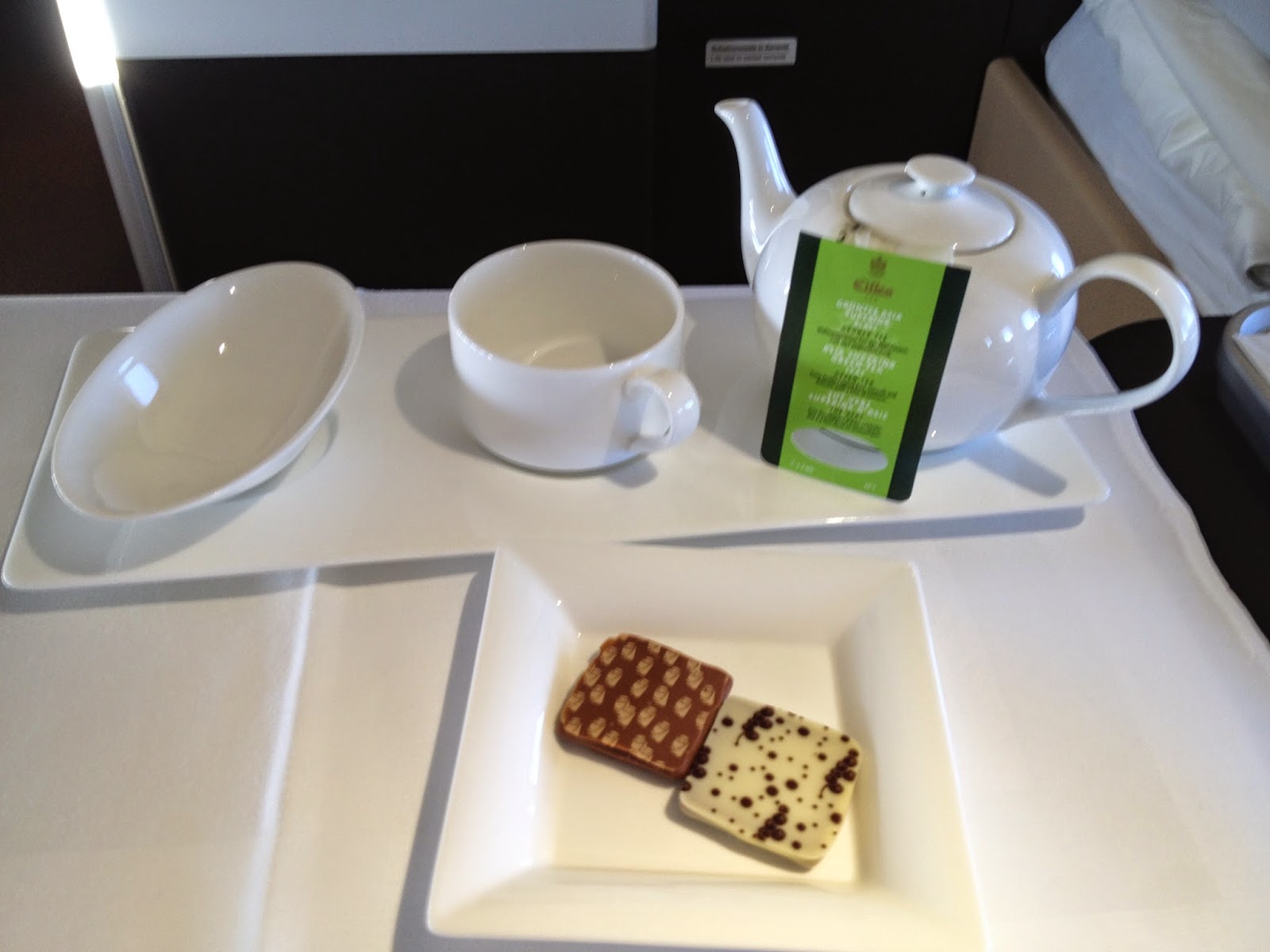 In-flight entertainment
And then I leaned my enormous armchair back in anticipation of finishing the Back to the Future trilogy (which had showed up on the Lufthansa entertainment system on my previous flight from Seoul).

But it wasn't there.

Amazingly, Lufthansa's 747-400's entertainment system is considerably worse than it is on the 747-8i. The movie selection was much smaller, and I was out of luck for the rest of the Back to the Future trilogy. I ended up watching Lucy (well acted by Morgan Freeman and ScarJo but terribly written) and the first half of The Fault in Our Stars (but stopped before I started bawling in the rarefied confines of Lufthansa First Class).

Because I'm secretly a 13-year-old emo kid who loves Dashboard Confessional, I'll finish The Fault in Our Stars eventually.

One cool inclusion in Lufthansa's in-flight entertainment selection (on both the 747-400 and the 748-i) is full-length classical-music concerts. From Seoul to Frankfurt, I watched the Munich Philharmonic (led by the late superstar-maestro Lorin Maazel) play Fauré's Pelléas et Mélisande Suite, Ravel's Piano Concerto in G Major (with http://en.wikipedia.org/wiki/Alice_Sara_Ott as the soloist), and Stravinsky's Petrushka.

On this leg, I watched an even better concert - Sir Simon Rattle (conductor of the Berlin Philharmonic) led the Simon Bolívar Symphony Orchestra. The group is young - like middle-and high-school student young. Venezuela has poured a ton of resources into the country's system of youth orchestras, and the Simon Bolívar Symphony Orchestra is the apogee. Current LA Philharmonic conductor-wunderkind Gustavo Dudamel got his start conducting that group.

Anyway, they sound just as good (and are more fun to watch) as most professional symphony orchestras. And the program was excellent, showcasing both German and Latin-sounding music: Gershwin's Cuban Overture, Ginastera's Estancia Suite, and Mahler's Symphony No. 1. The concert closed with two crowd-pleasing encores: Bernstein's Mambo from West Side Story and Strauss's Radetzky March.

It was probably the most enjoyable concert I've ever seen. I found a video of it (although it cuts off before the last finale).

Alright, thanks for bearing with me as I went a little nerd-crazy there. Now back to the good part.

Meal #2
I took a very comfortable nap on the standalone bed and woke up just in time for the second meal service.

Praline of Fig and Foie Gras
with Pistachios, Macadamia Nuts,
and Mango Chutney

The appetizers came out on a cart (but on large plates rather than individual servings); Lika plated them as we pointed at what we wanted to try. I had some of the smoked salmon and fig-and-foie-gras praline with mango chutney. 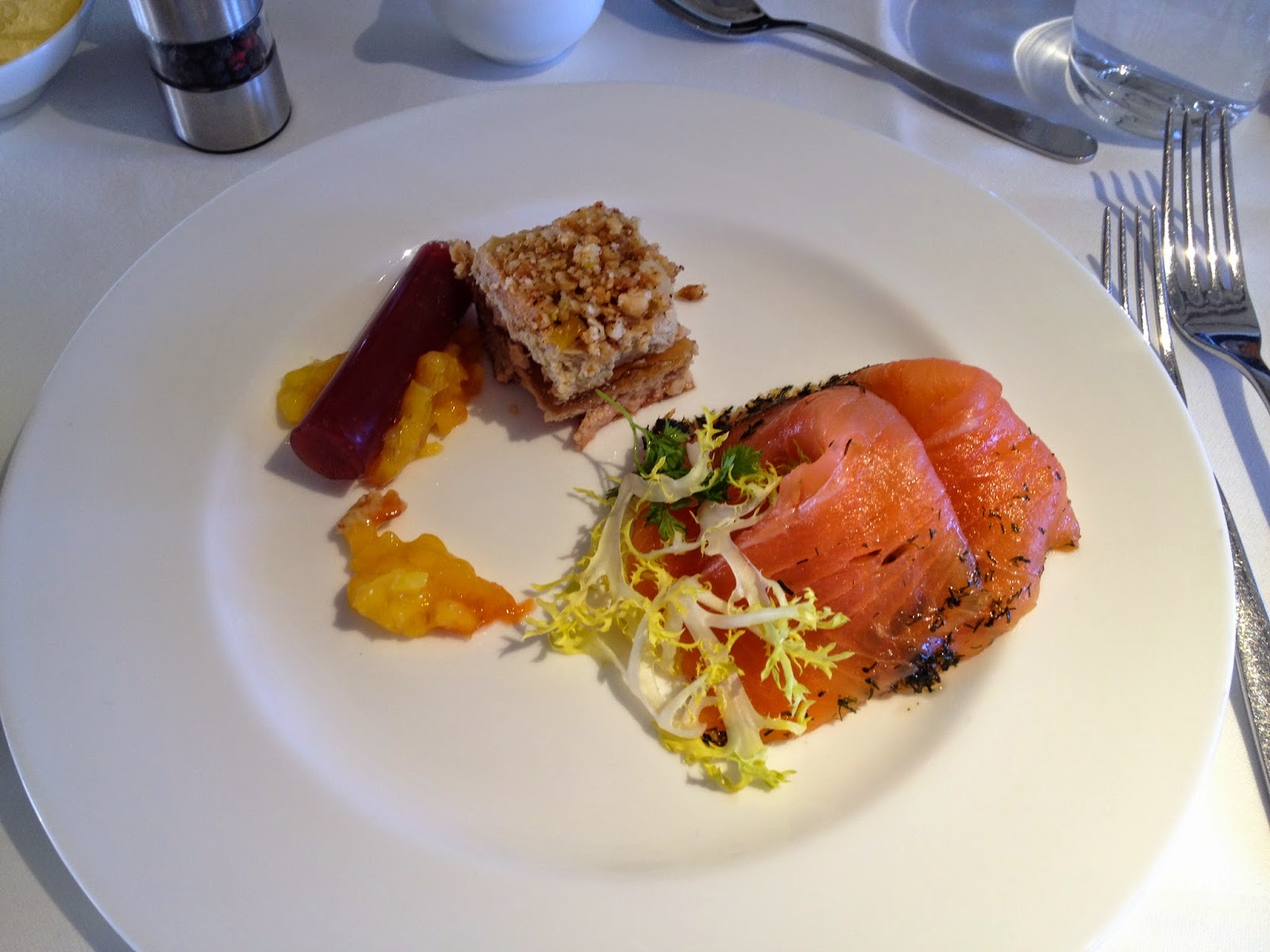 I got the veal meatballs in a caper cream sauce with rice - phenomenal (and rich). 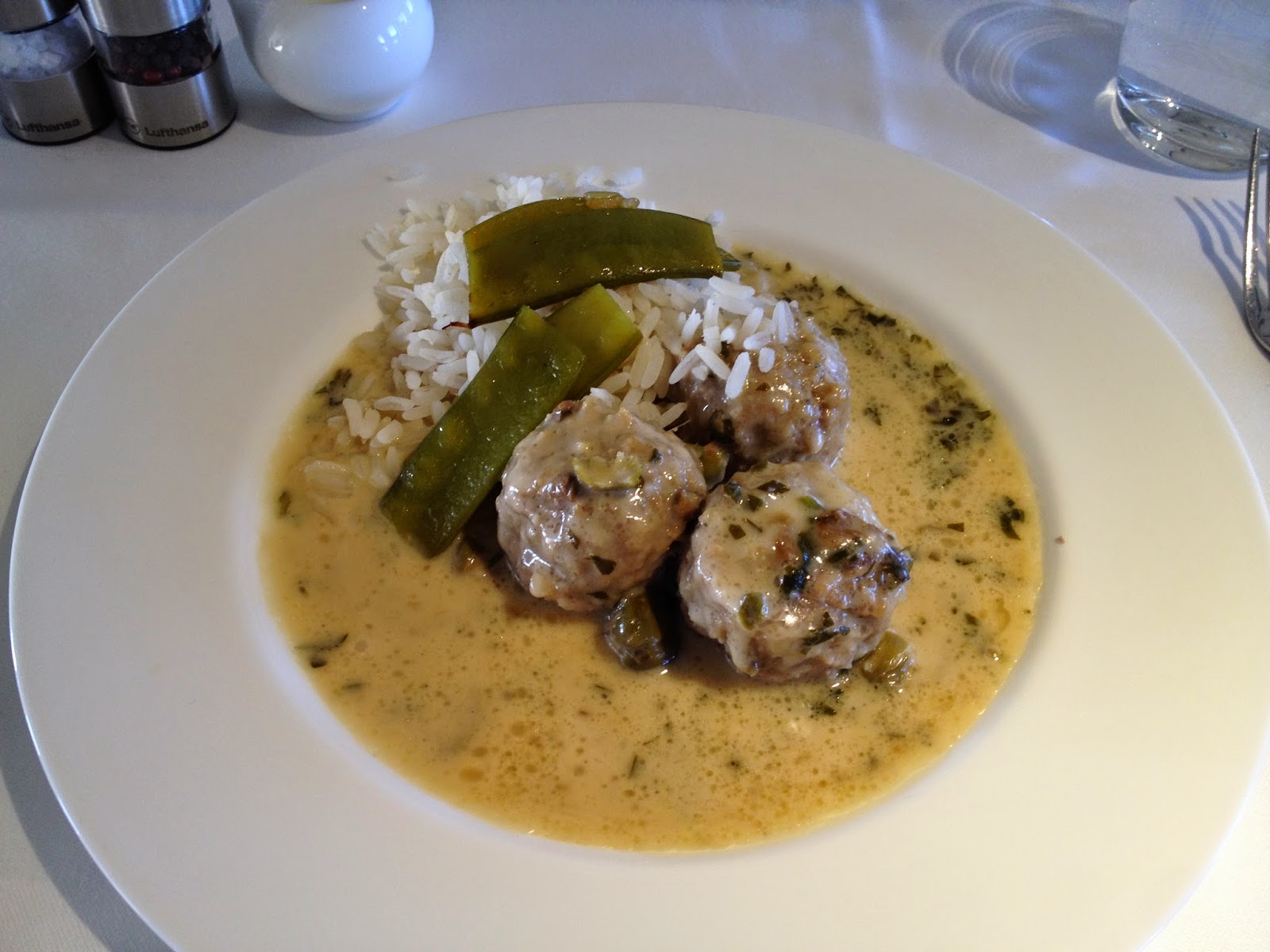 I took a pass on dessert and changed out of my pajamas back into civvies for landing. 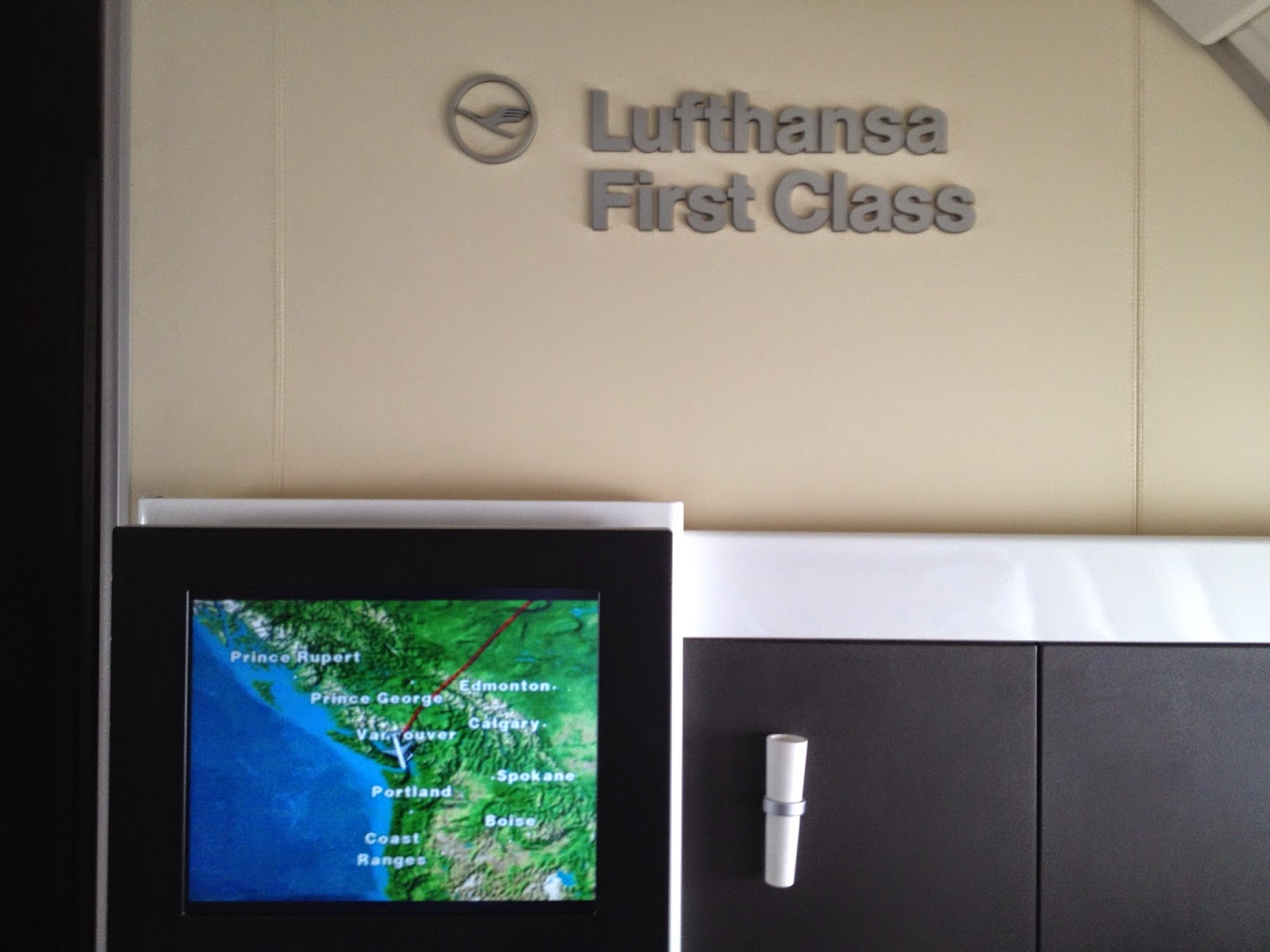 Landing announcements were made in German, English, and French. Oui oui, bienvenue. Merci.

(I would guess there was probably nobody on the plane who spoke only French among those three languages. Only 1.1% of Vancouver households speak primarily French at home. Chinese, at a whopping 14.8%, would have been more useful.)

And soon we were on the ground at Vancouver International Airport - with that, my jaunt in international first class ended. 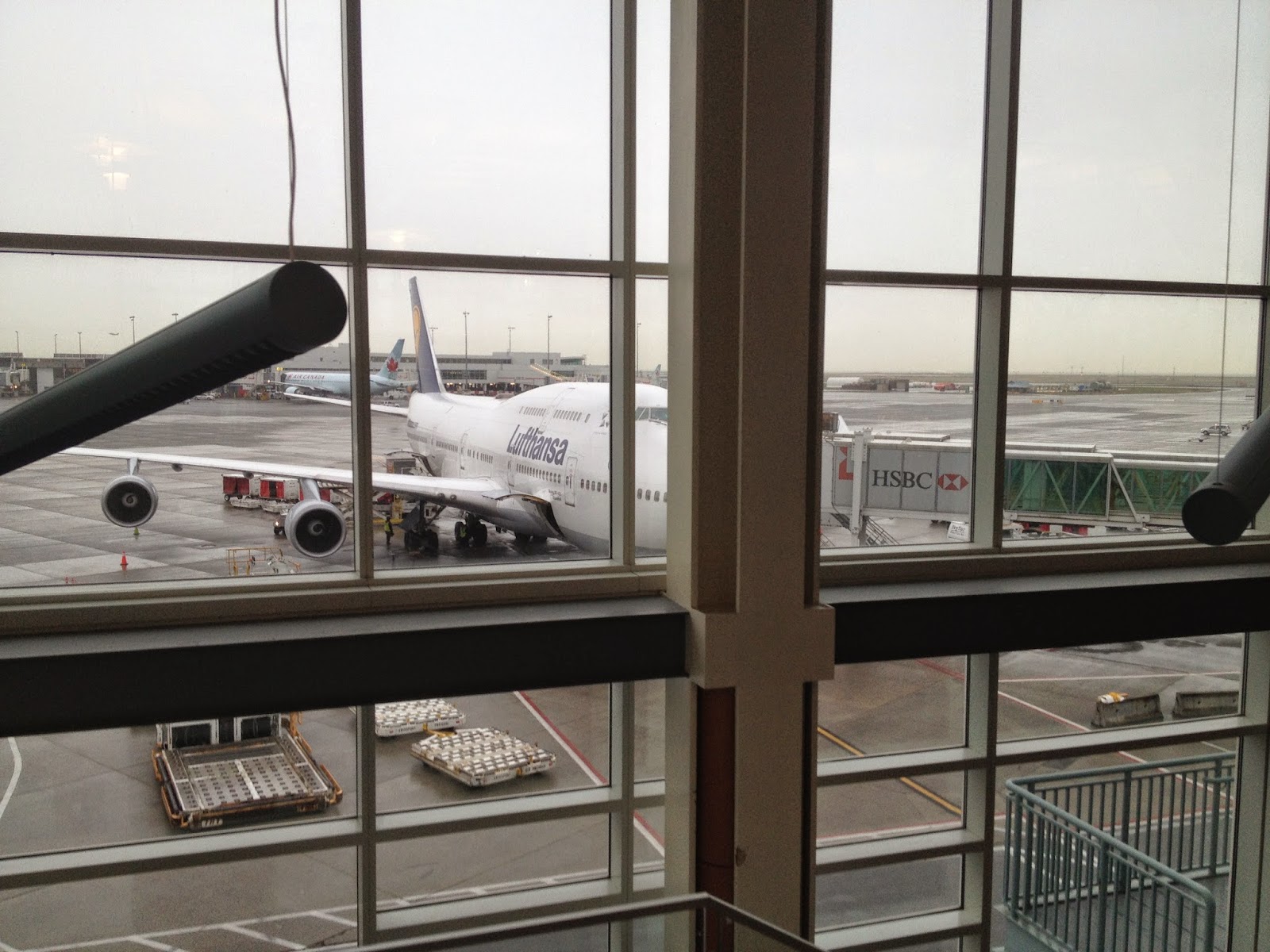 The 747-400 at Vancouver International Airport


Conclusion
Between Lufthansa and Singapore's first-class offerings, I think I'd still lean slightly toward Singapore. But it's very. very close. Lufthansa gets the edge in ground-service offerings at the hub airport (the First Class Terminal and chauffeur drive to the plane are more impressive than The Private Room). Singapore gets the nod with its physical product and consistency of service. The food is excellent on both.

The question of which airline is better isn't merely theoretical - the airlines compete head-to-head on flights between Frankfurt and both Singapore and New York-JFK on their A380-800 superjumbos. But you can't really go wrong either way - they're both top-shelf first-class offerings, leaps and bounds better than those on United and American.