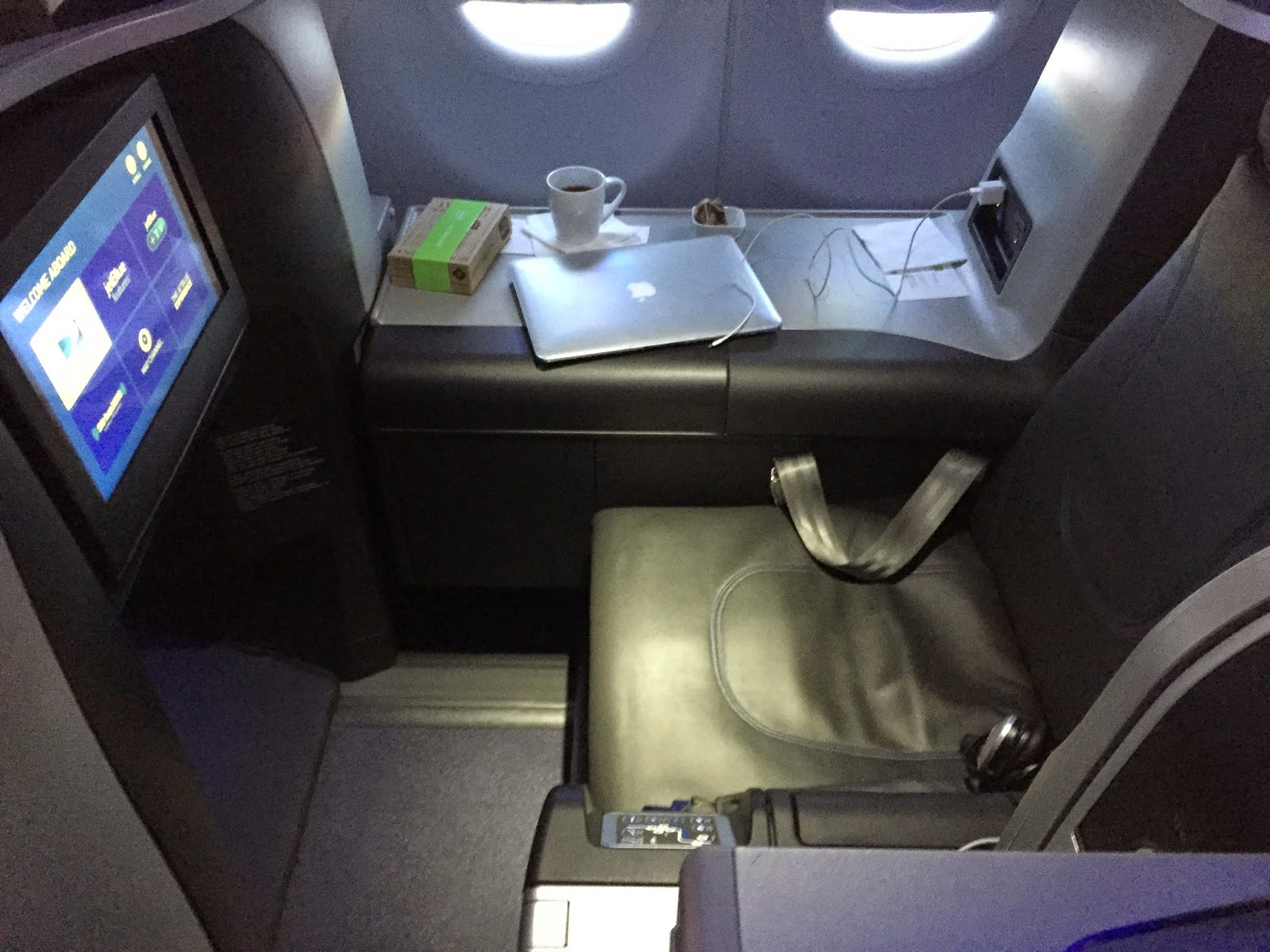 Mint is priced significantly lower than its competitor products on the route. So on my most recent trip to New York, I was eager to try it out.
JetBlue operates out of San Francisco's beautiful international terminal, which is connected to the San Francisco Airport subway stop. There is a dedicated check-in lane for customers traveling in Mint and for JetBlue's Mosaic frequent fliers. 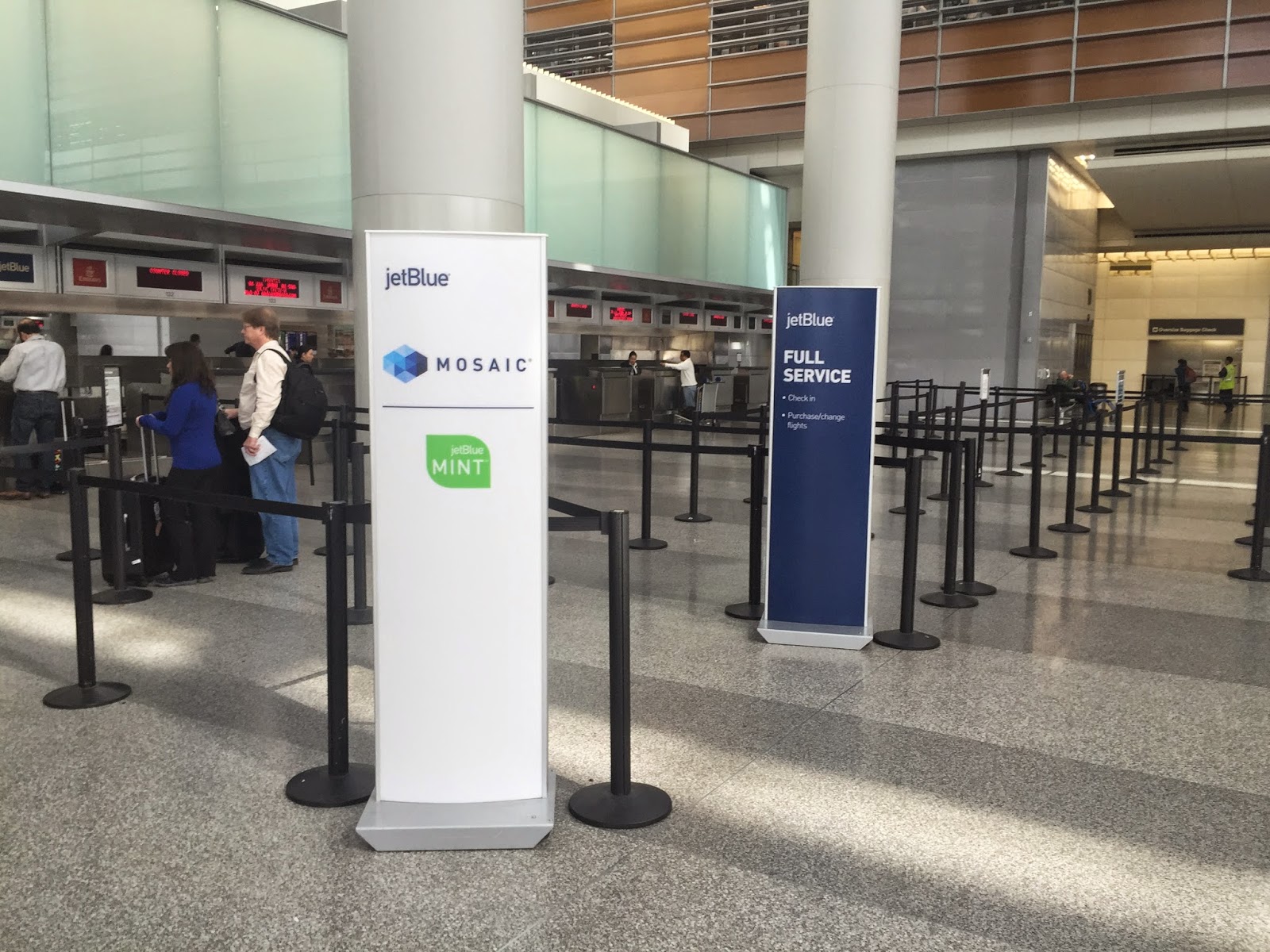 Mint entitles passengers to use the premium security lane, although the lines in the international terminal aren't usually very long.

Unfortunately, JetBlue doesn't have its own lounges, and JetBlue hasn't contracted with other airlines to give its Mint passengers guest lounge access. That's too bad - there's not much going on in the International Terminal A area in SFO (and minimal food options). 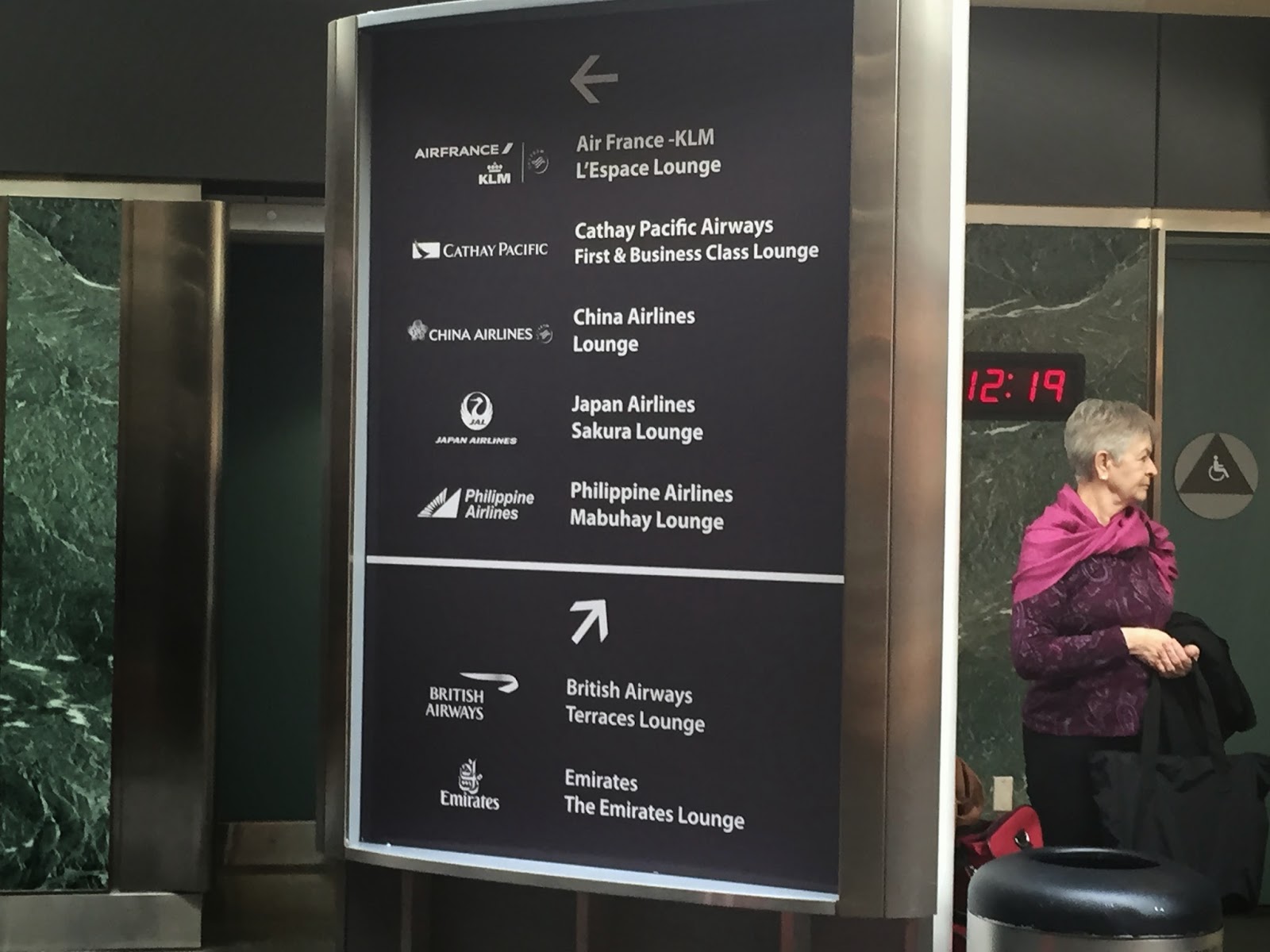 Seven lounges in International Terminal A; none for Mint passengers.

The plane watching from the international terminal is great - this Cathay Pacific flight was about to head to Hong Kong. 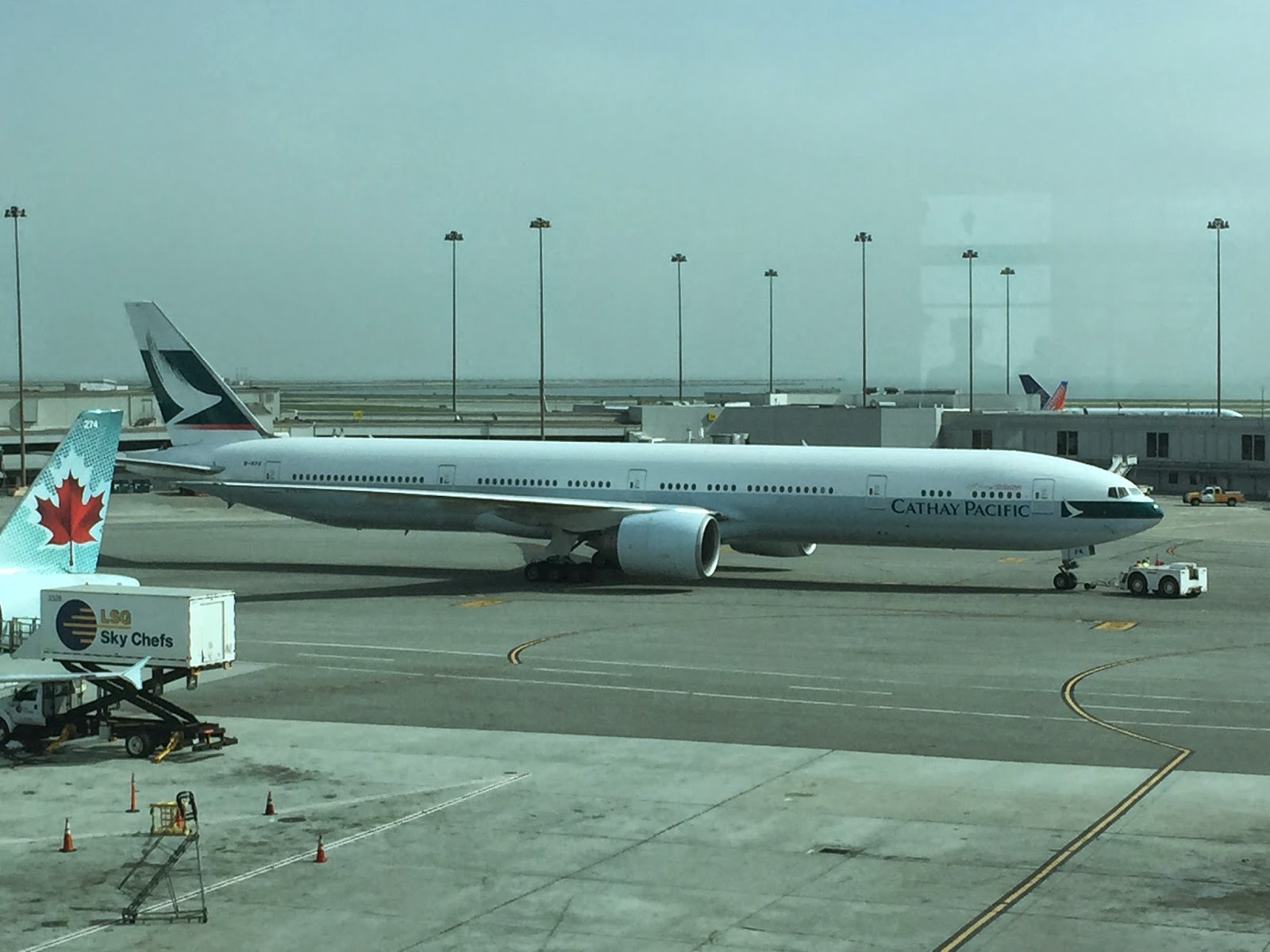 Boarding begins with Mint passengers and Mosaic members, followed by premium economy (JetBlue's "Even More Space" seats), then from the back of the plane forward.

Boarding and the Mint cabin

The Mint cabin is visually striking - the windows shades were all drawn closed and the cabin was illuminated with blue mood lighting (similar to the magenta mood lighting in Virgin America). With the dark seats, the cabin looks like an exclusive club/lounge. 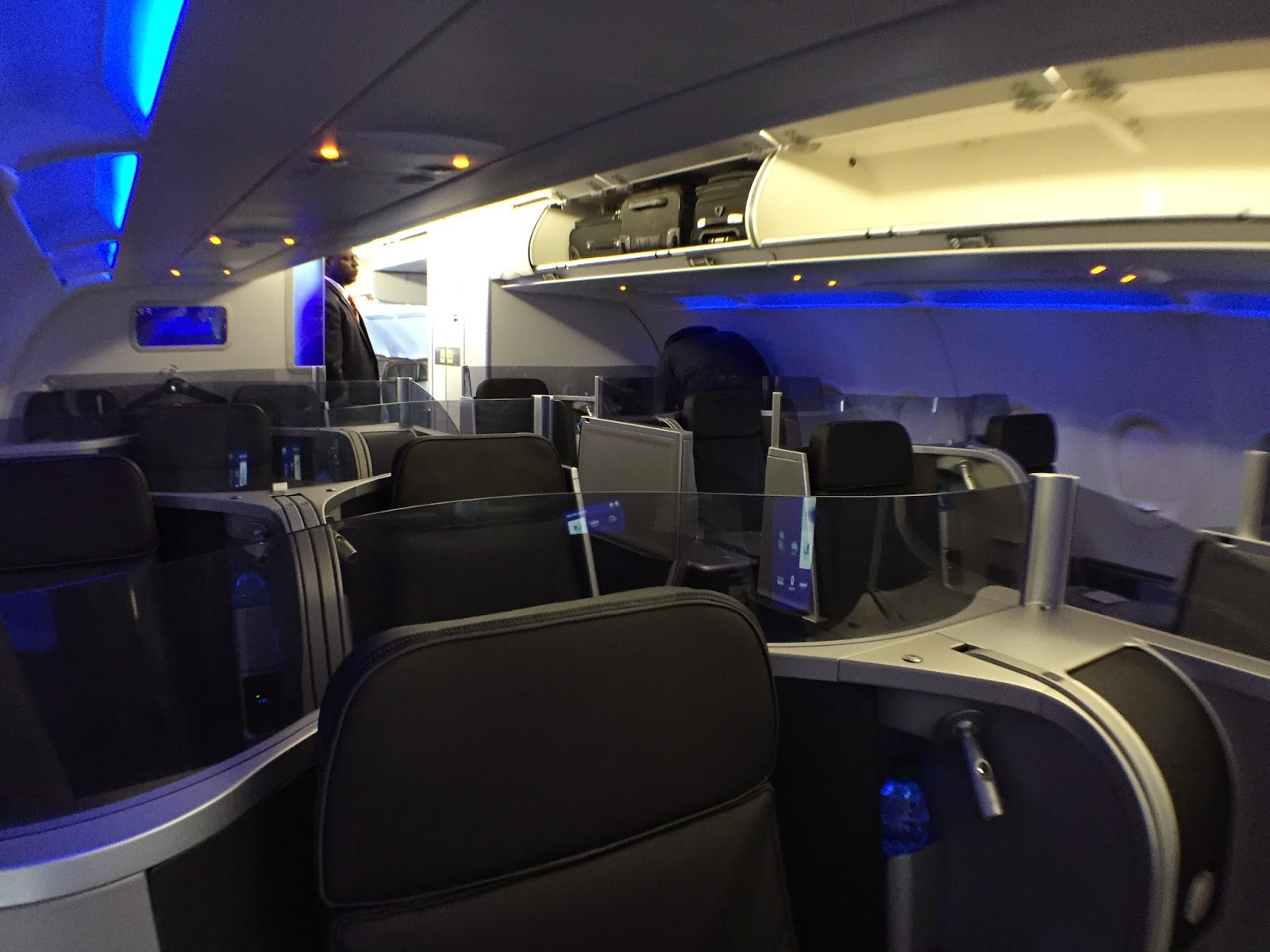 The Mint cabin has five rows. The odd rows have four seats across in a 2-2 configuration; the even rows have solo seats in a 1-1 configuration. I occupied 2F, which is one of the solo seats. (11 of the 16 seats were filled on our flight, so everyone got their own half-row except one couple flying together). 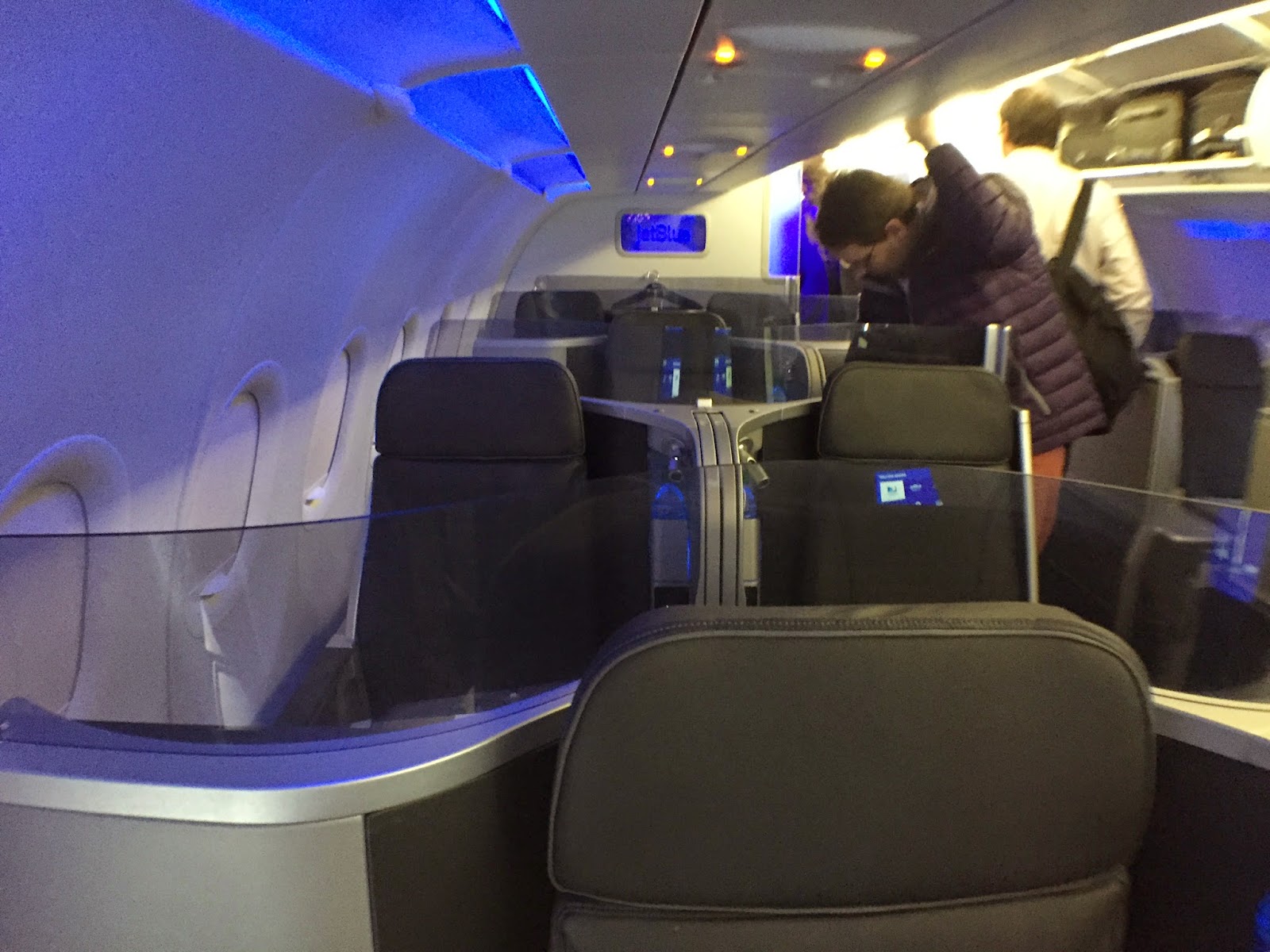 Each seat had a large fluffy grey blanket, a bottle of Dasani water, and a welcome card signed by the two flight attendants working the Mint cabin. The welcome card noted that headsets, toothbrushes, and toothpaste are available upon request. 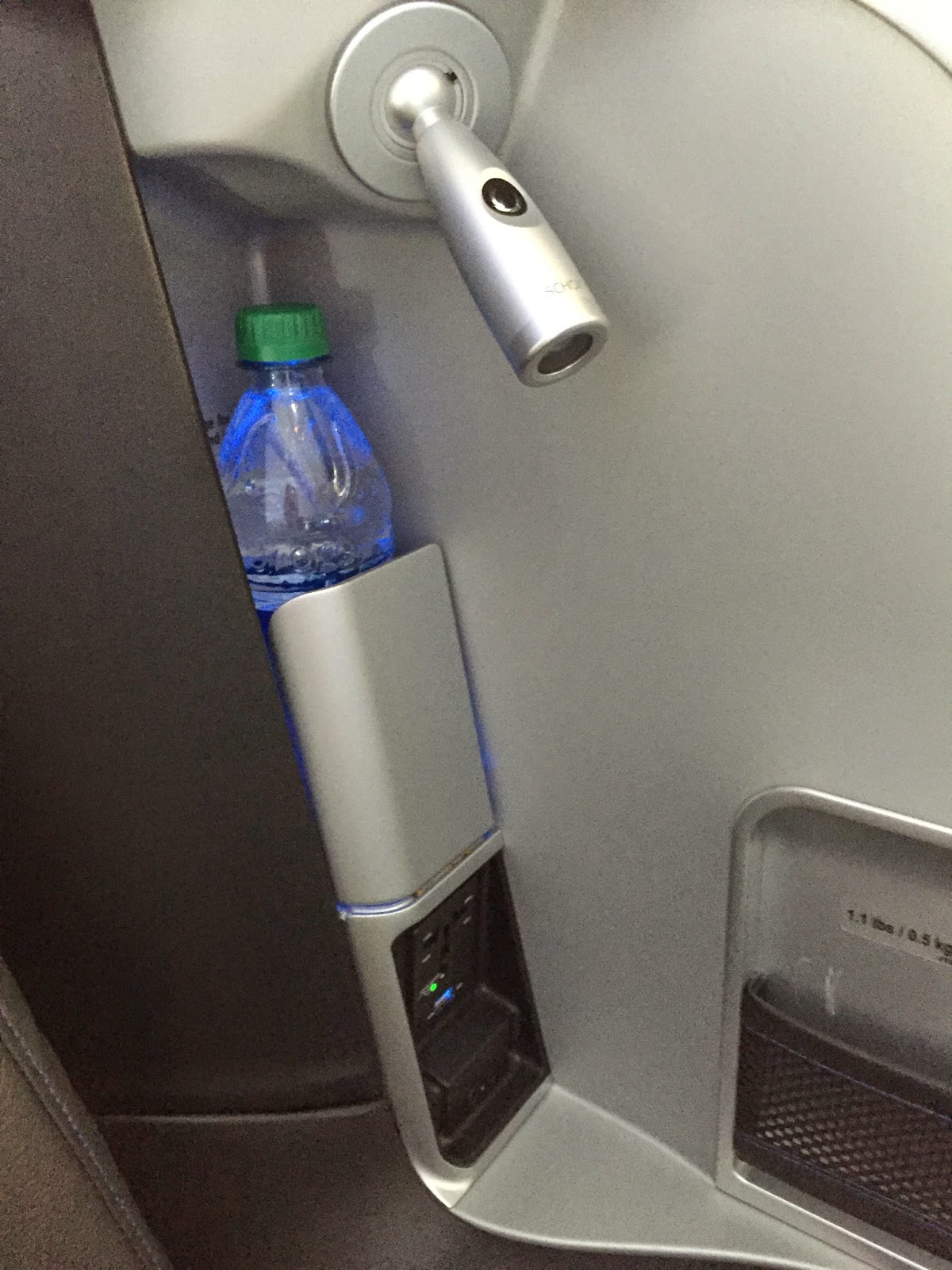 Before departure, flight attendants Adrian and Danny greeted each passenger by name and asked whether they had flown Mint before. When I replied that it was my first Mint trip, Adrian showed me the seat controls (which are intuitive) and in-flight entertainment system. 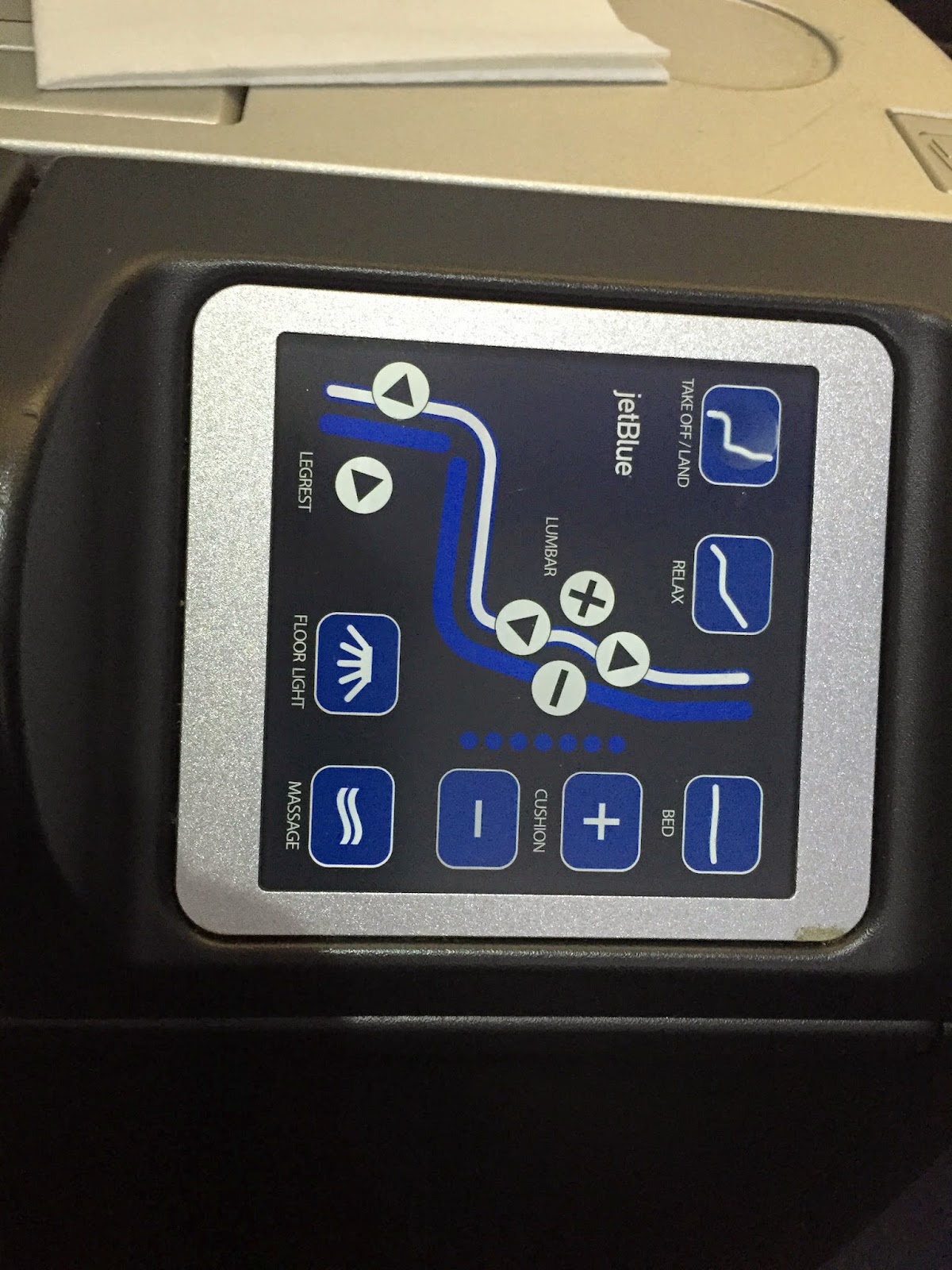 He also offered a pre-departure beverage and suggested the signature "RefreshMint," a honey-infused limeade with a mint sprig (with or without vodka). 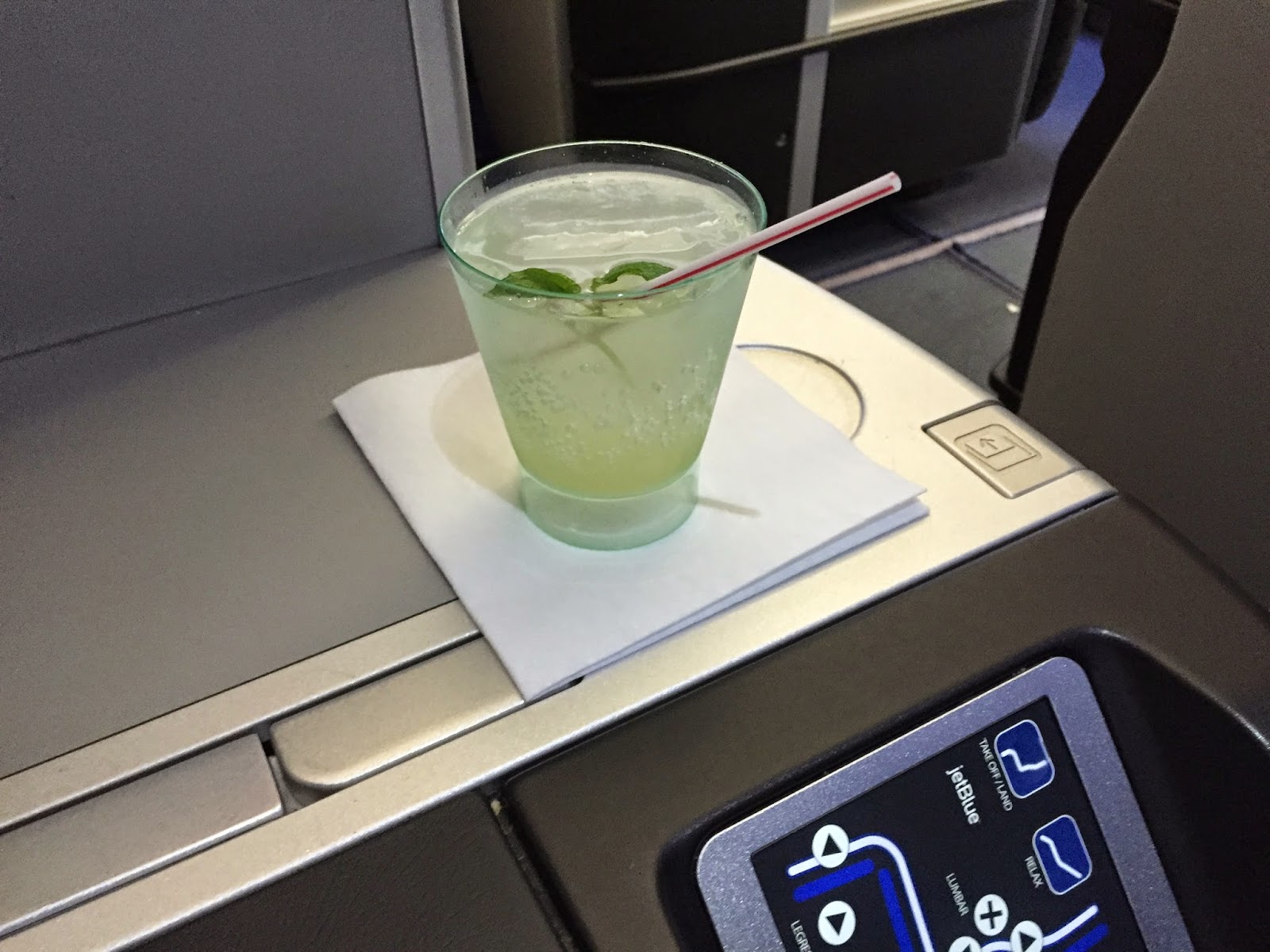 
The seat has a remarkable amount of storage - there's a compartment near the floor for shoes; several cell-phone sized pockets; and a breadbox-sized compartment for laptops and reading materials. I also appreciated the three (!) sets of electric plugs at my seat, which meant I could charge my laptop and phone separately. Unfortunately, there's no place to store a carry-on bag except in the overhead bins. 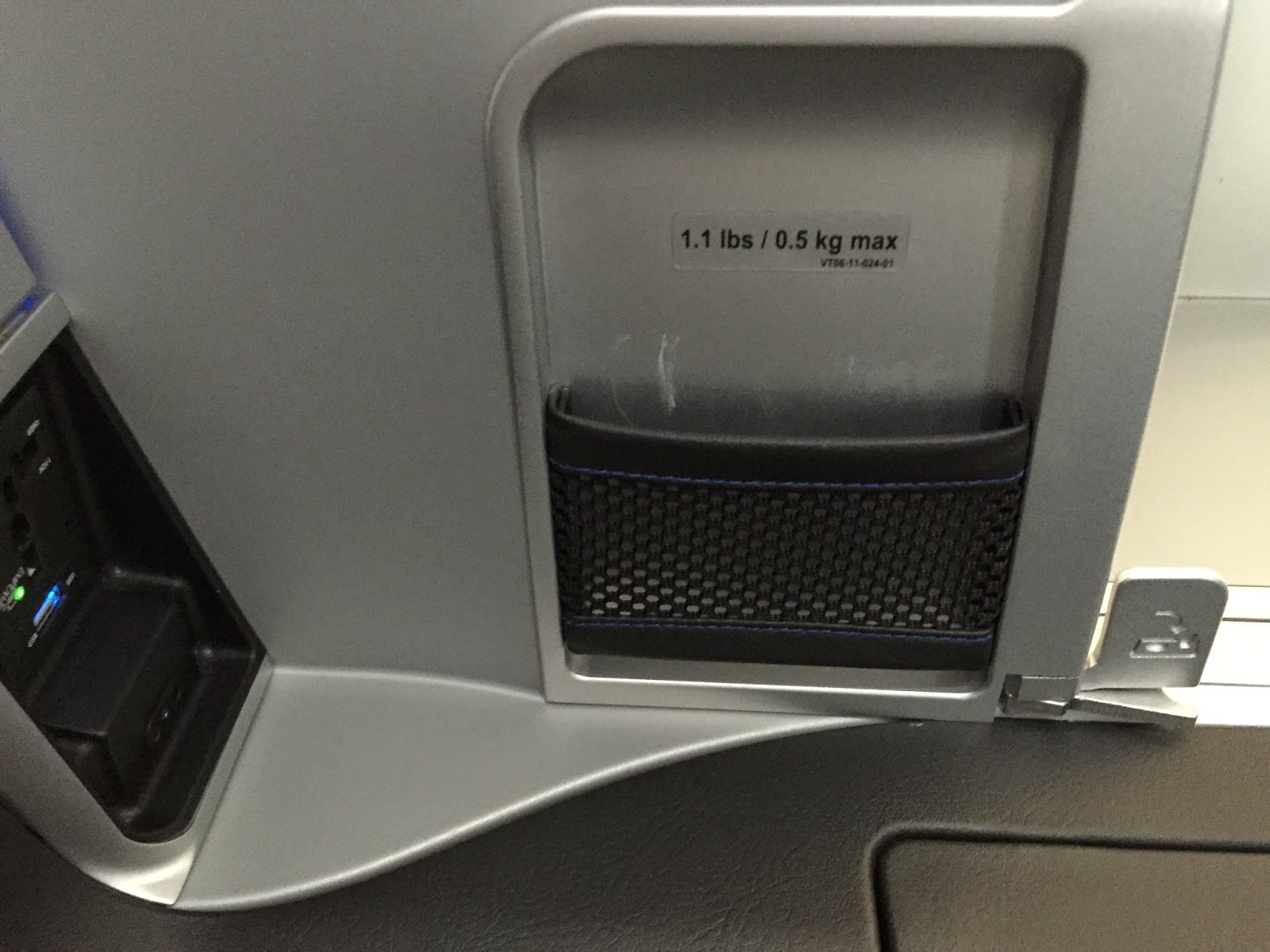 Adrian came around to distribute menus and explained the Mint dining concept. There are five choices of small plates, with three hot options and two cold options; passengers can choose three of the five plates. The menu is designed by Saxon + Parole, a popular restaurant in Manhattan's NoHo neighborhood. 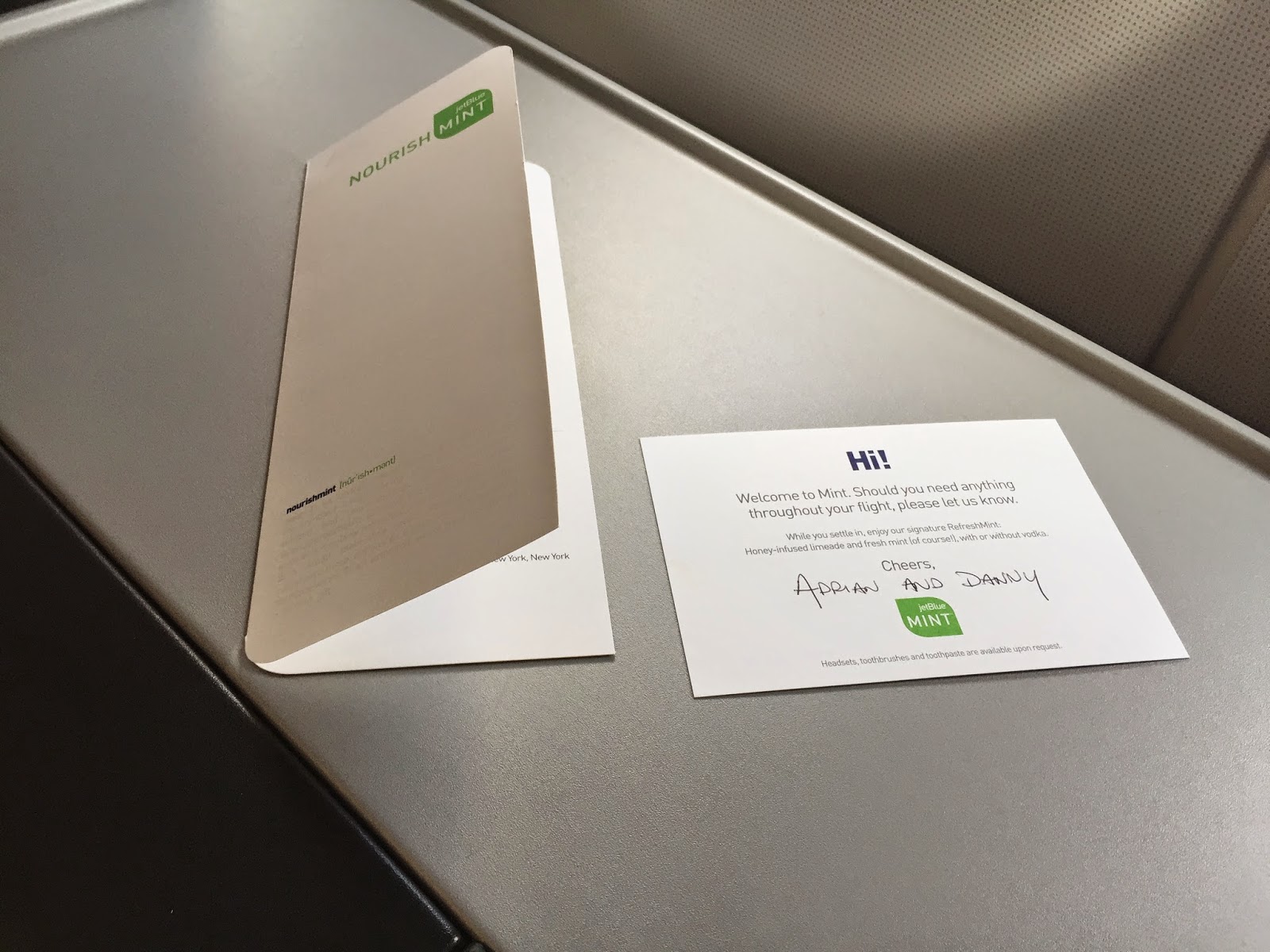 DELISH DISHES
Step up to the plate(s) & choose three.
Pleas note: The first two dishes are served chilled.
A lighter meal option is available upon request.

It's an impressive menu (particularly the drink selection - look at those premium vodkas). 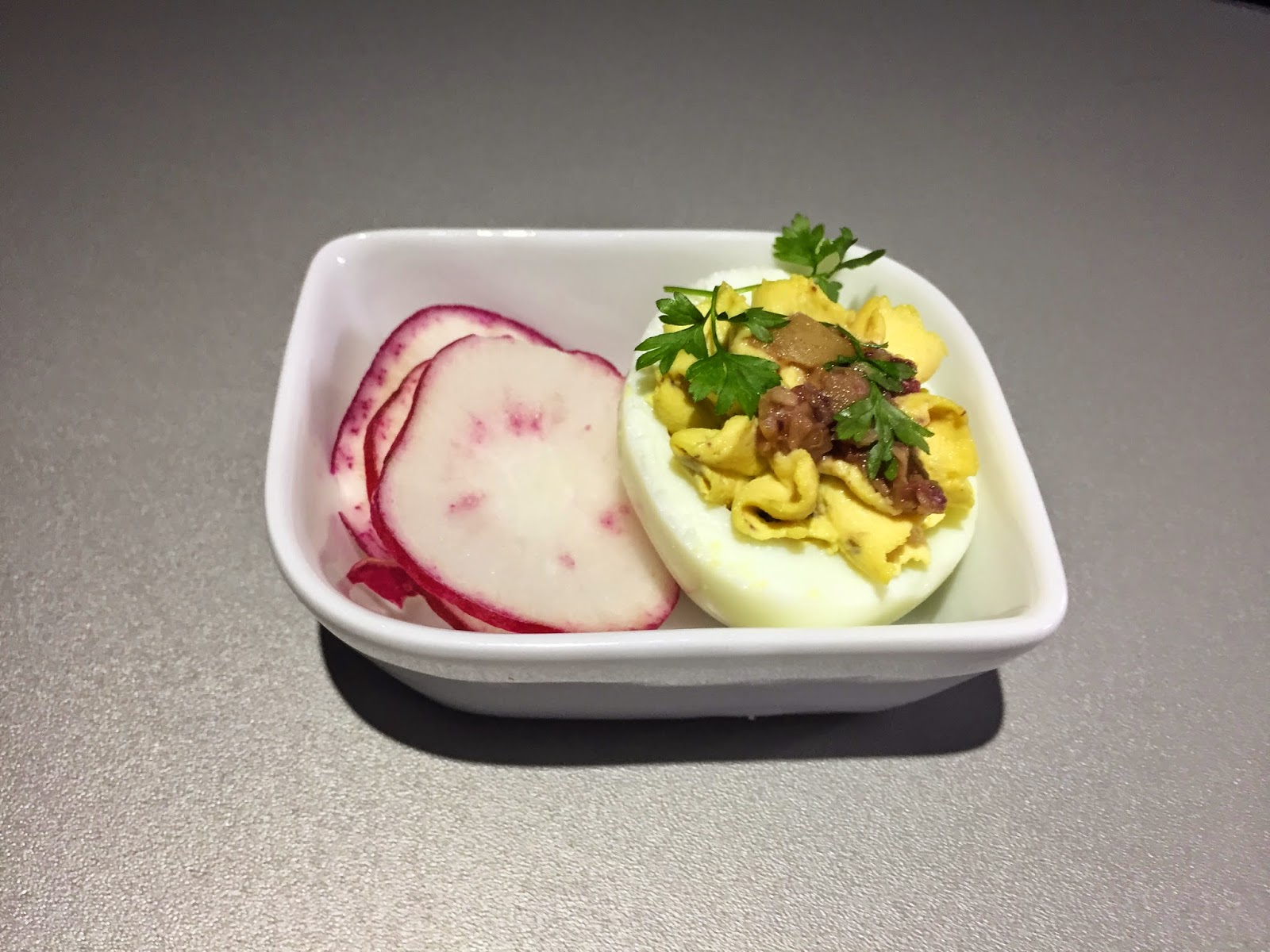 It's a very pretty deviled egg. Unfortunately, I really dislike olives, but even those horrible little briny nuggets couldn't ruin the delicious morsel.

The plates came out on a tray with a piece of olive bread (there wasn't a choice of breads). 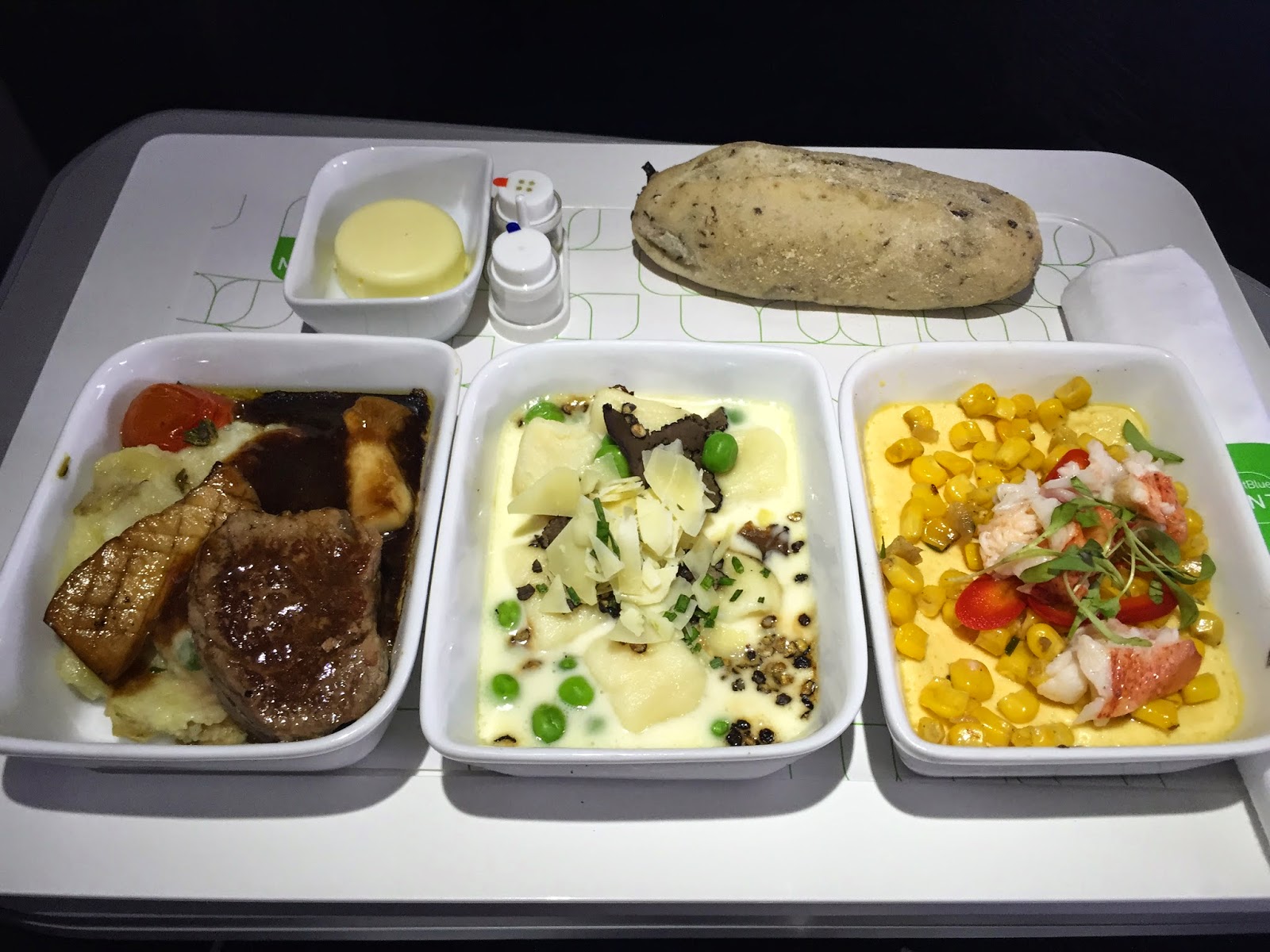 
The ribeye was a disappointment - overcooked and a bit dry, but the mouth-watering balsamic ginger sauce helped. The mushrooms and mashed potatoes were excellent accompaniments.

The gnudi (ricotta gnocchi) dish was the big winner. The sauce was delicious, rich, and creamy, and the generous slices of black truffles, parmesan shavings, and ample cracked black pepper created a complex and savory flavor profile. The gnudi were cooked perfectly. This is one of the best dishes I've eaten on a plane.

The corn and lobster custard was fine. It's hard to get fresh corn this time of year, and this looked and tasted like soggy microwaved frozen corn. (Perhaps they should wait on this dish until they can get fresh corn). It could have used a bit more lobster as well.


But overall, I love the Mint dining concept. Often, I'm torn between several options on an airplane menu; the small-plate dining style allowed me to try a bit of everything I wanted. The portions were sized appropriately - I was sated, but not stuffed.

Dessert arrived on a new tray: 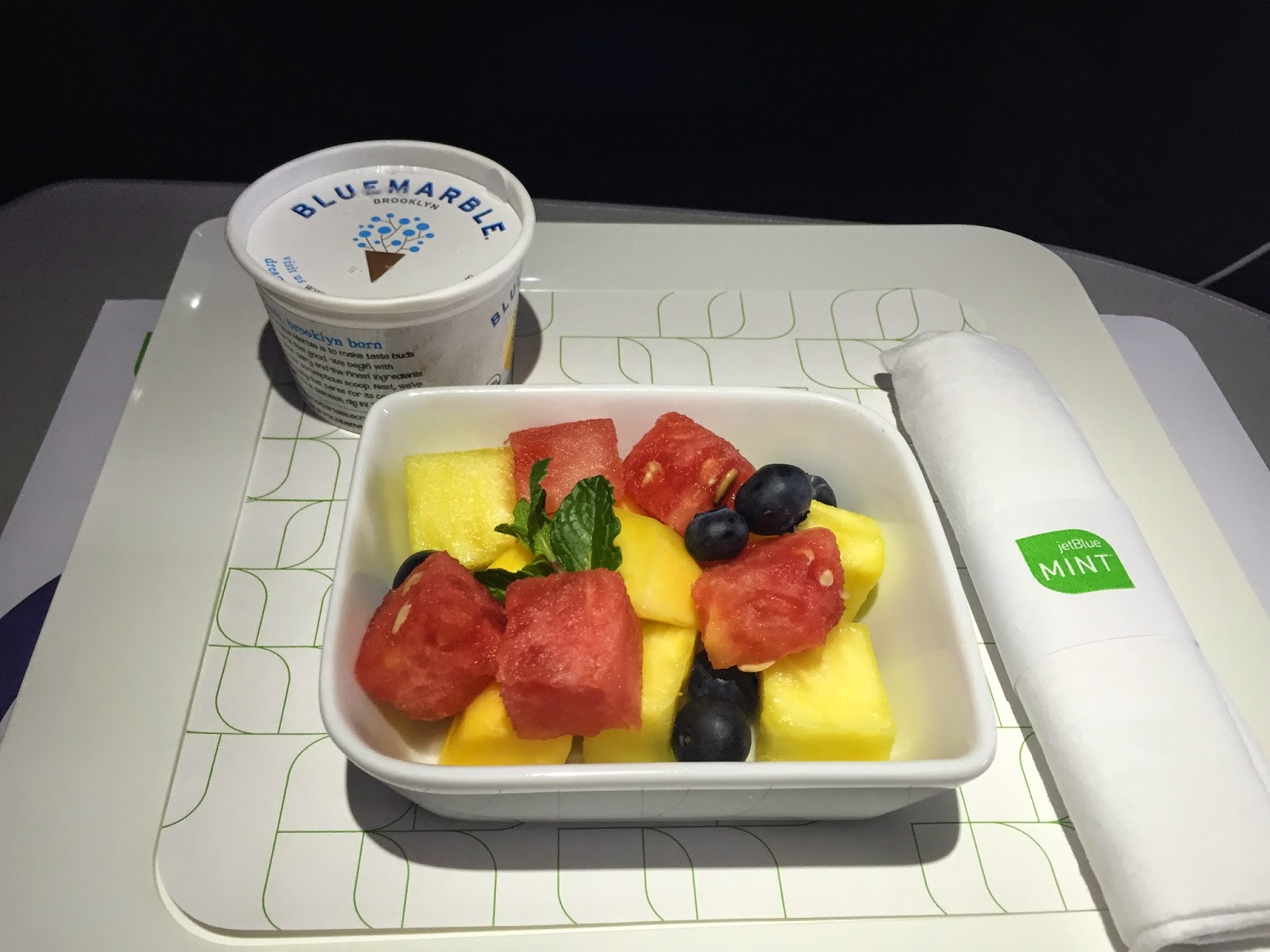 The highlight of the fruit salad were the mango slices - I rarely see fresh mango in fruit salads, and these mangoes were ripe and delicious. But even the mango couldn't compete with the delicious Blue Marble ice cream. 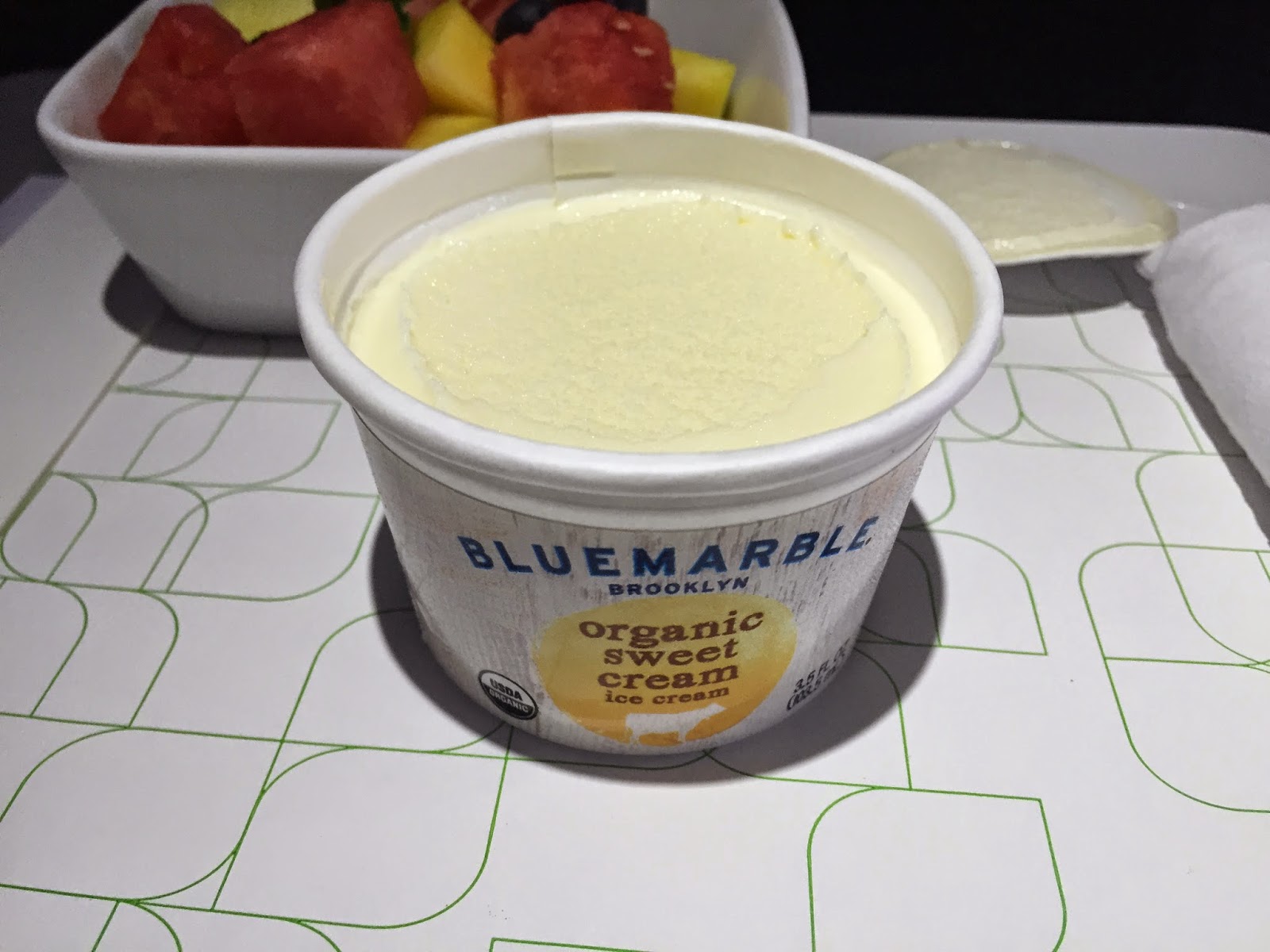 Airplane ice cream tends to be rock-solid; this was at the perfect consistency. This is a truly excellent ice cream, on par with the offerings at the artisanal-and-priced-accordingly San Francisco ice-cream giants Bi-Rite and Humphry Slocombe. Rich, buttery, and not too sweet. Great product placement, Blue Marble - I'll be sure to stop by if I'm ever in Brooklyn in the summer.

I finished the meal with a cup of peppermint rooibos tea. 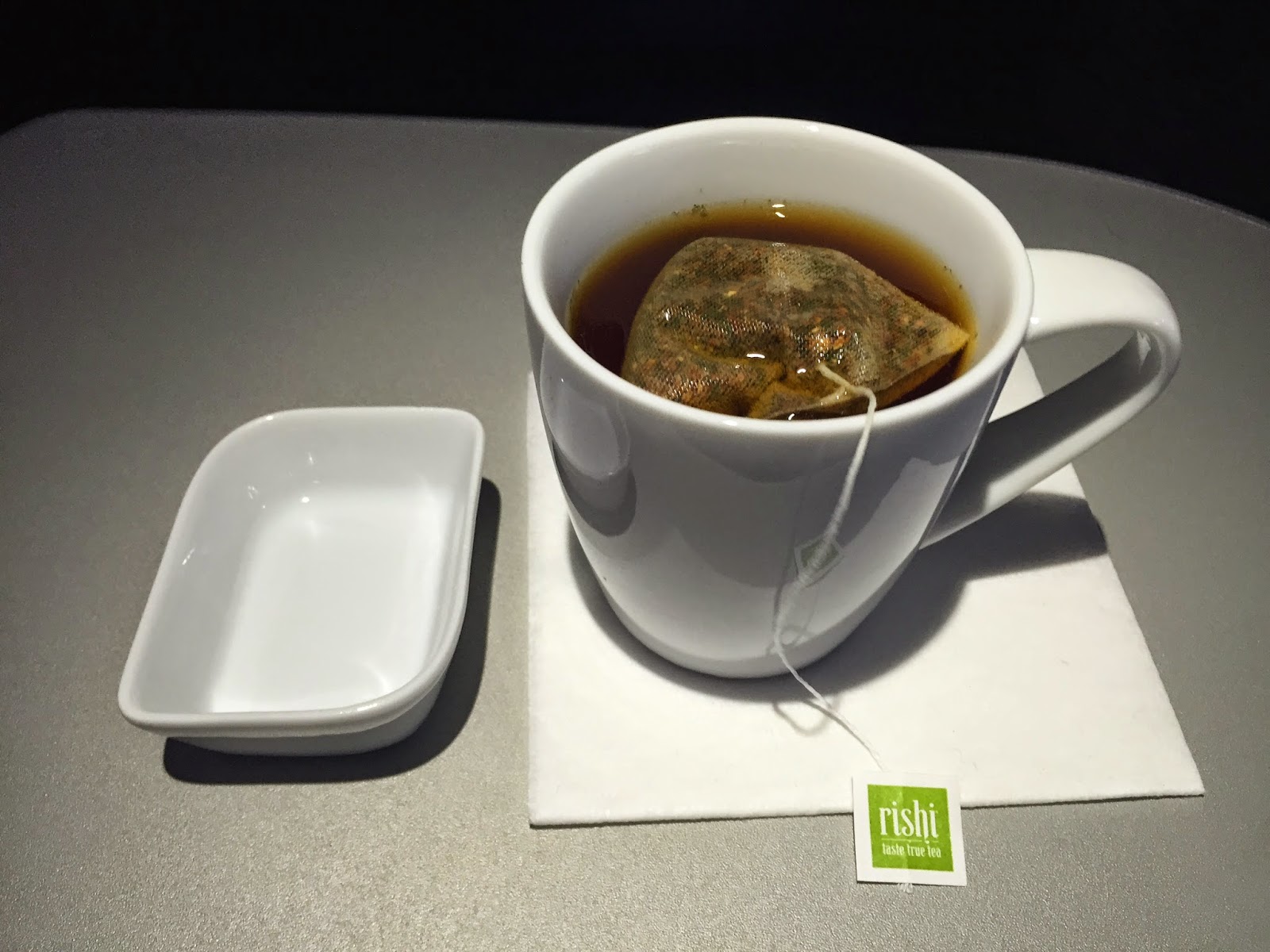 Between the Mint and economy cabins, there was a drink fridge stocked with sodas and a few cabinets of snacks (Snyder's pretzel sticks, Nacho cheese Doritos, etc.) for all passengers (not just those flying in Mint).


Wi-fi / In-flight entertainment
JetBlue is the only airline offering free wi-fi on these routes. The connection was a bit choppy, but when it worked, it was plenty fast (although the upload speed was very, very slow).

The in-flight entertainment system is DirecTV, with an ample selection of TV channels showing their regular programming. (It's the same system you see on many United flights). Unfortunately, DirecTV doesn't have audio-visual on demand; you can't pause the programming or start a new movie mid-flight.

The solo seats in the even rows have sliding doors The doors aren't particularly high - someone walking by in the aisle can easily see into the suite. But when the seat goes into bed mode, the doors add a fair amount of privacy. 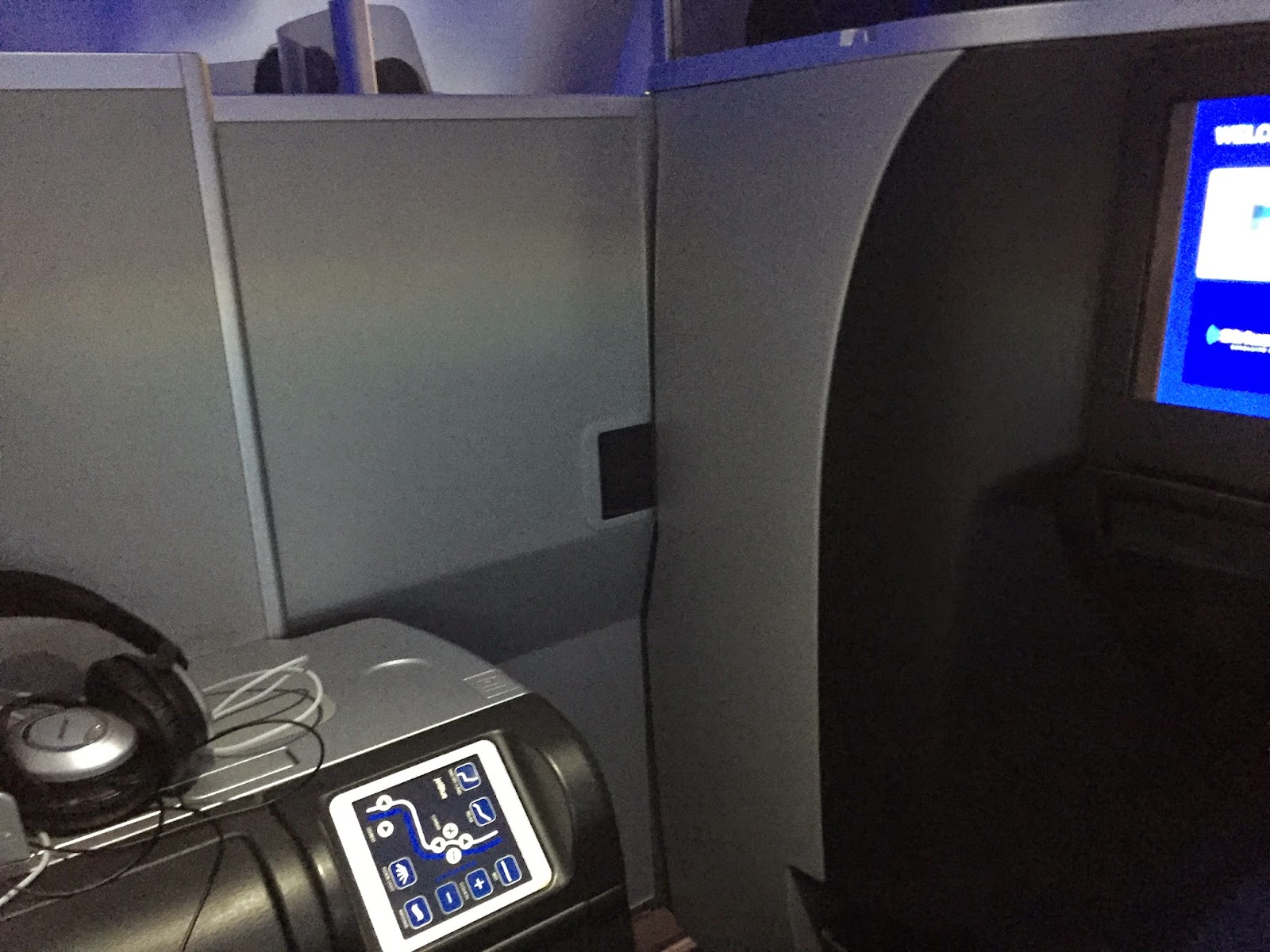 Amenity kit
I think JetBlue and American are the only airlines to provide amenity kits on this route. JetBlue's amenity kits come from Birchbox, which delivers curated boxes of beauty/grooming supplies with its $20-a-month subscription service. I think (but am not positive) that there were different amenity kits for men and women. 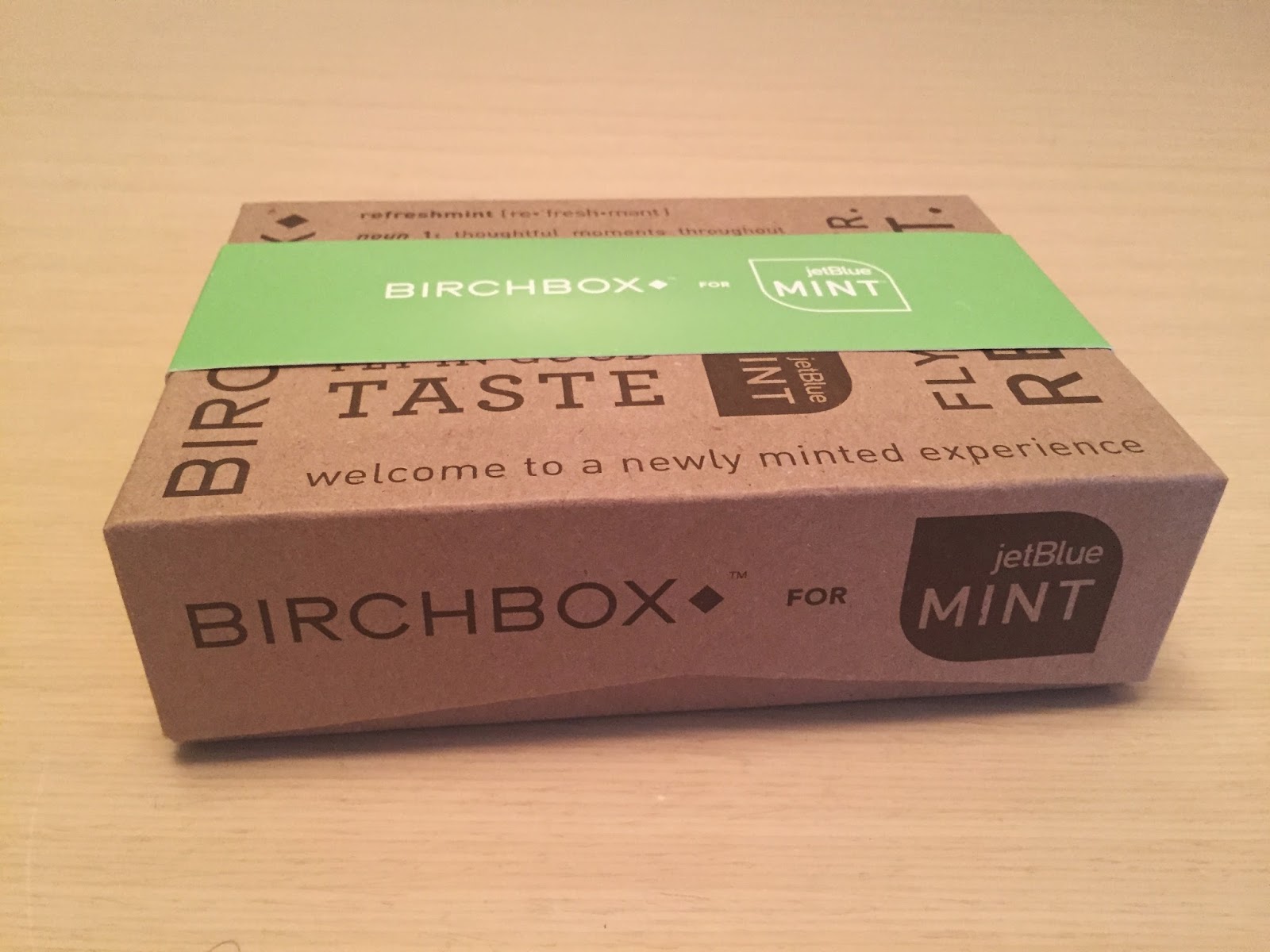 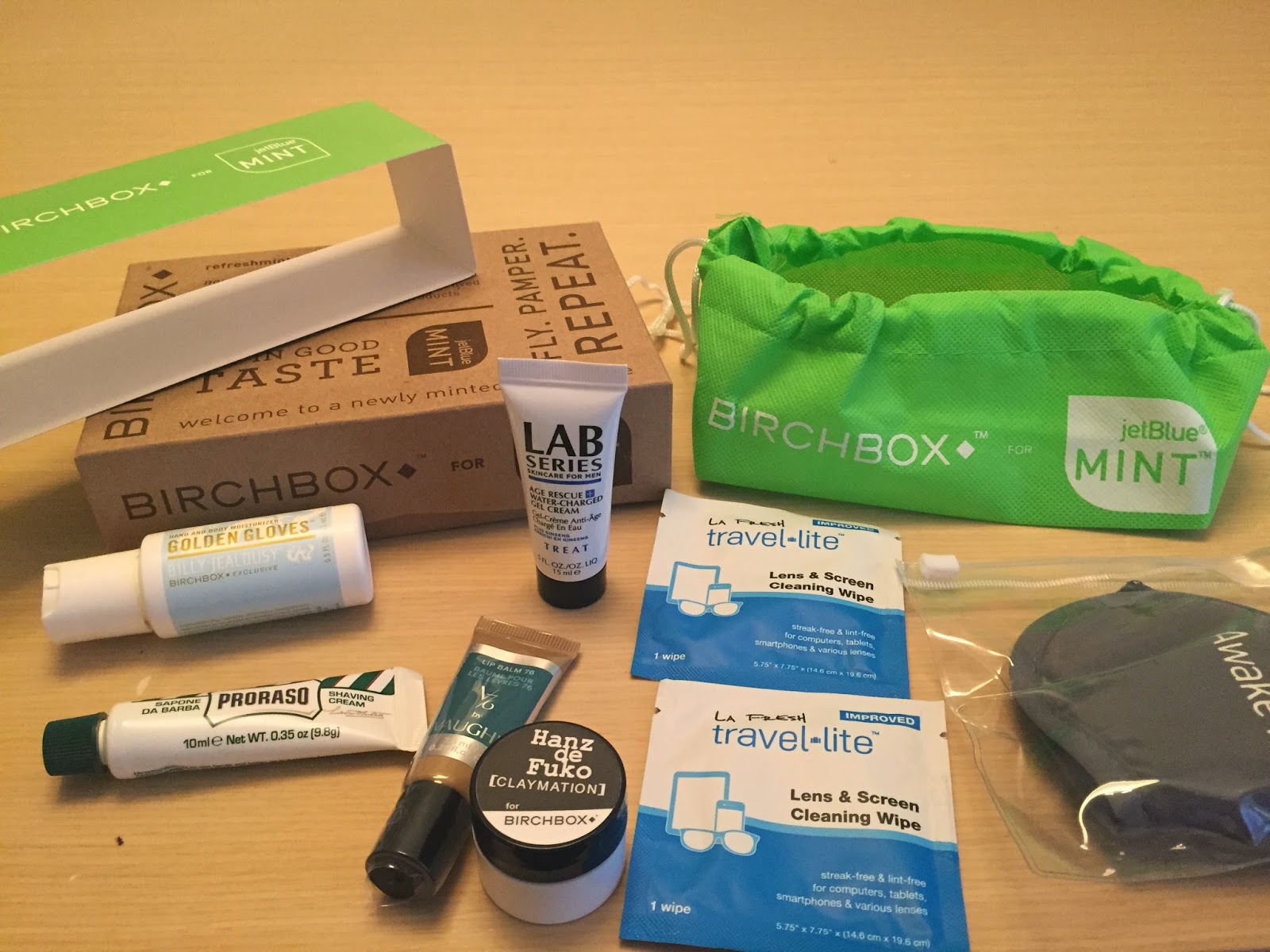 Let's see - what did we get?
And an eye shade was on our seats at boarding. It's not the world's most useful amenity kit (I think a toothbrush / toothpaste / floss are the most useful items), but it's a great way for Birchbox (and some of the brands it carries) to reach a new audience. And, as I noted earlier, toothbrushes / toothpaste were available from the flight attendants upon request.

Chicago
It was a beautiful clear night in Chicago, and I managed to snap this shot of my old stomping grounds. 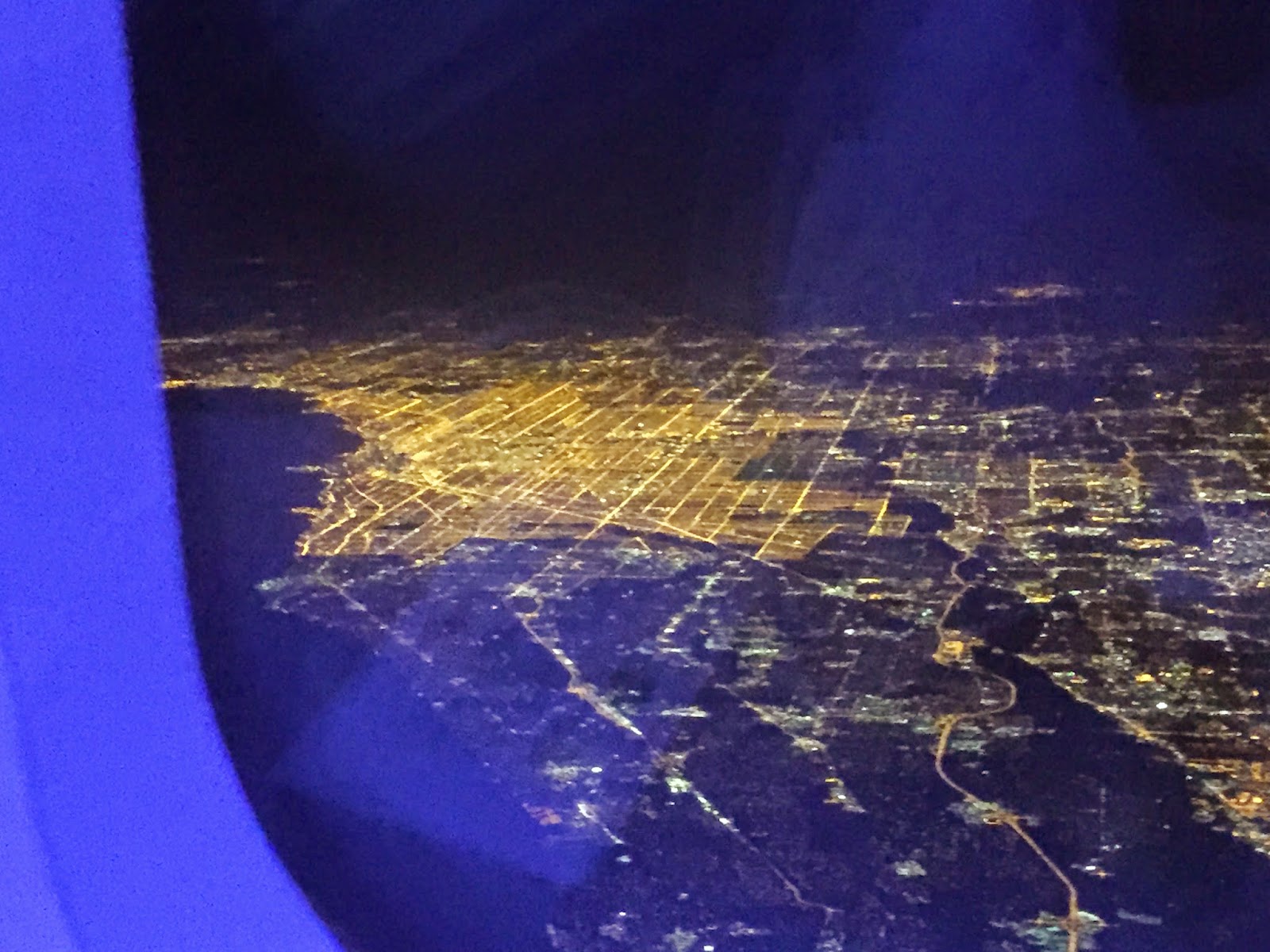 Departure gift
Before landing, the flight attendants distributed a small box of treats from Mah Ze Dahr Bakery, a mail-order baked-goods shop. Inside, there was a vanilla marshmallow and a oat-and-pecan pastry. 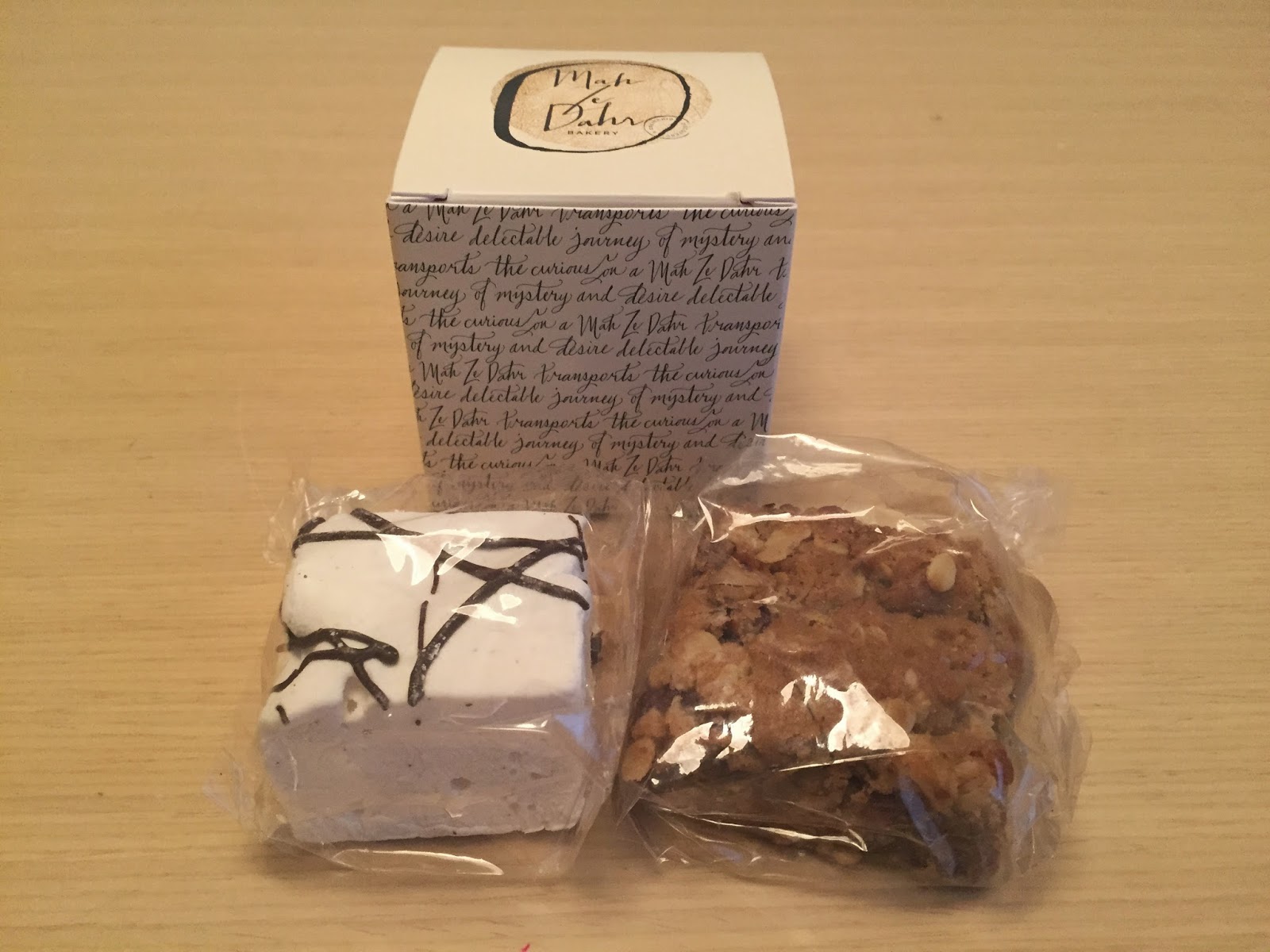 Conclusion
Mint exceeded my expectations. The flight attendants seemed to really love their jobs and gave Singapore Airlines-level service. There's a fair amount of interesting product placement on the flight, a welcome change from the humdrum offerings you might expect on one of the legacy carriers.

$599 each way isn't a bargain, but it's priced very favorably compared to the other airlines' business-class products on this route. I was able to get a fair amount of work done on the flight thanks to the free wi-fi.

So if you're doing a transcontinental trip and get to fly in business class, give Mint a shot. I don't think you'll regret it.
Posted by The Pointiff at 12:16 AM