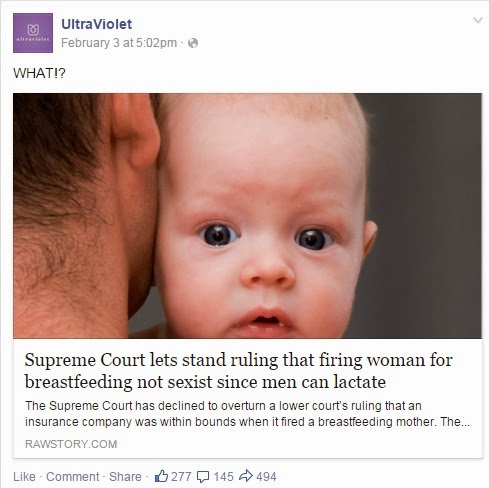 These are the facts of the case, in brief:

Angela Ames, an employee of Nationwide (the insurance company with that mumble-y Peyton Manning ad), returned to work from maternity leave and needed to pump her breast milk. She states that she was told there was a three-day waiting period to access Nationwide's three lactation rooms.

Ames alleges that the unavailability of the lactation rooms, along with unrealistic expectations about her work production, made her feel "like she had no other choice" than to resign. She alleges that her supervisor handed her a piece of paper telling her what she needed to write to resign while saying: "Maybe you should just stay home with your babies." Ames sued Nationwide and her supervisor in federal court alleging sex and pregnancy discrimination.

District Court Opinion (S.D. Iowa)
So what's all this about men lactating? That comes from a footnote in the district court opinion (see footnote 28):


Ames argues that she is a member of a protected class—that of lactating mothers. In support, Ames argues that lactation is a medical condition related to her pregnancy. Several courts, however, have considered and rejected the argument that terminating an employee due to lactation is gender or pregnancy discrimination. Ames has not presented sufficient evidence that lactation is a medical condition related to pregnancy.
. . .
Indeed, as the Nationwide Defendants point out, “lactation can be induced by stimulating the body to produce milk even though the person has not experienced a recent birth or pregnancy.” Additionally, the Court takes judicial notice of the fact that adoptive mothers can also breast-feed their adoptive babies. Furthermore, it is a scientific fact that even men have milk ducts and the hormones responsible for milk production.

Judge Robert W. Pratt of the U.S. District Court for the Southern District of Iowa granted summary judgment in favor of the defendants, holding that Nationwide did not take adverse action against Ames under a theory of constructive discharge. In other words, the court would have reached the same result even without the bizarre proposition that lactation has no relation to pregnancy. The sidebar on male lactation did not determine the result of the case, and it's unclear why the opinion includes such an unnecessary and controversial footnote.


Appeal to the Eighth Circuit
Ames appealed to the U.S. Court of Appeals for the Eighth Circuit, which affirmed Judge Pratt's decision 3-0 (opinion). Notably, the Eighth Circuit's opinion never discusses male lactation, nor did it address whether lactating mothers are part of a protected class. Instead, it affirmed on the basis that Ames could not demonstrate that Nationwide took adverse action against her.


(1) In a constructive discharge case, must the plaintiff also prove that the employer acted with the intent of forcing the plaintiff to resign?

(2) In a constructive discharge case, must the plaintiff also prove that before resigning he or she complained sufficiently to the employer about the discrimination?

Note that neither of these questions relates to sex discrimination specifically, nor do they ask whether lactating mothers are a protected class in discrimination suits.

Except in rare circumstances not applicable here, the Supreme Court never has to take an appeal. The Court disposed of 7,547 cases between October 7, 2013 and July 1, 2014, granting petitions for review in only 74 of those cases (just under 1%).

As former Chief Justice Vinson stated, the Supreme Court "is not, and has never been, primarily concerned with the correction of errors in lower court decisions." Under Supreme Court rules, the Court will only grant review for "compelling reasons," usually involving a split of authority among the federal appellate courts or state supreme courts.

In the vast majority of cases, the Supreme Court summarily denies review without opining on the merits of the case. That's exactly what happened on January 12, 2015 when the court issued its order summarily denying review in Ames v. Nationwide Mutual Insurance (along with hundreds of other cases). 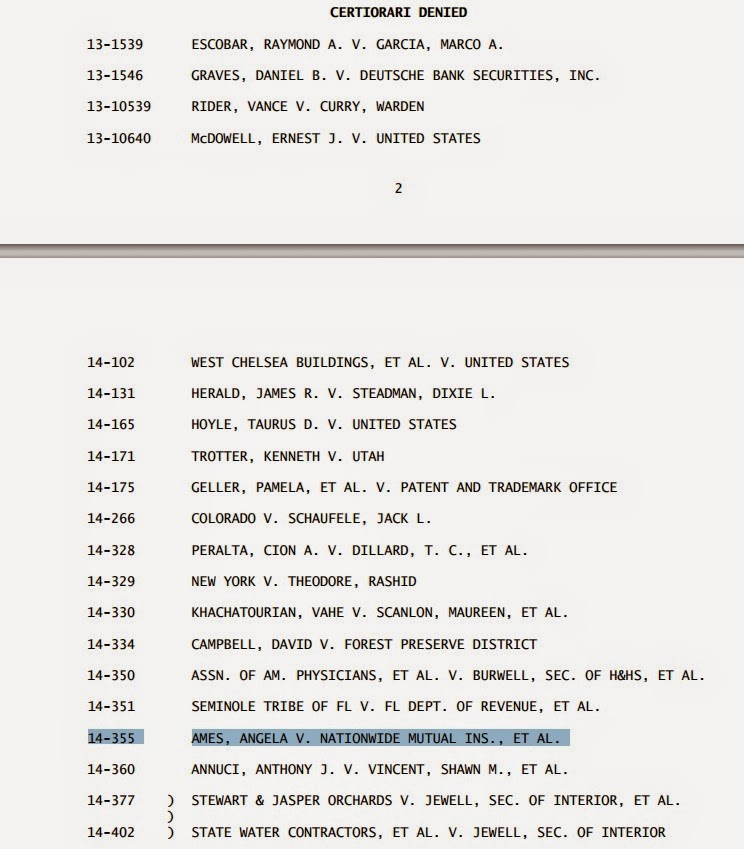 The order contains no Supreme Court endorsement of the district court's theories, nothing about lactating men, and nothing about the merits of Ames's appeal. Any headline that hints otherwise is incorrect.


Conclusion
Misleading headlines, such as those covering Ames, risk eroding public confidence in the judicial system. This sort of irresponsible journalism is deplorable.

Nevertheless, the articles hint at an important policy and legal question. Imagine that a boss summons a lactating mother to his office and says: "Jane, I'm sorry. You're a great employee, but this is a place of business, and we can't have employees pumping their breast milk here. We're going to have to let you go." Would Jane prevail on a discrimination claim?

Although this scenario is more egregious than the one in Ames, it seems like the district court here would have said "no" because lactating mothers are not a protected class. But that doesn't seem like the correct answer.
Posted by The Pointiff at 7:07 PM