This is Judge Alex Kozinski. Source:  Underneath Their Robes

Judge Kozinski is a judge on the U.S. Court of Appeals for the Ninth Circuit. He's famous for his brilliance, wit, and "well-known libertarian leanings."

And if you become a target for Judge Kozinski's wrath during oral argument, you're in a lot of trouble.  That trouble was on full display in a recent Ninth Circuit argument.

The best parts of the video -- after the jump.

The case, Baca v. Adams, presents some troubling facts for the state. A prosecutor, called to the stand by another prosecutor, lied under oath in a criminal trial.  The defendant gets convicted.

This is the sort of prosecutorial misconduct that corrupts both the trial and outside perceptions of the criminal justice system. And Judge Kozinski gave the state's attorney an earful:

Judge Kozinski: Has [the witness-prosecutor] been prosecuted for perjury?

A: He hasn't been prosecuted for perjury

A: I don't know the answer to that, Your Honor.

Q: You know - it's a little disconcerting when the state puts on evidence, the evidence turns out to be fabricated, nothing happens to the lawyer and nothing happens to the witness. And so I have to sort of doubt the sincerity of the state when they say it's a big mistake.   I would think that if somebody lied on the stand, they're in a criminal case, the first thing that would happen would be a prosecution of the witness, and if the lawyer had any complicity in it, that lawyer would get disbarred. Has there been any effort in that regard?

Judge Wardlaw: I mean, is that the practice of the Riverside County prosecutor, to put on prosecutors who lie, and then "that's OK, because we have this other evidence"?

A: I don't think it's proper, Your Honor, and I hope that I made that clear when I began this argument, and I think it's clear that the California courts have --

Judge Kozinski: Not reassuring that they have taken no steps.  I mean, you would think that if they find out about it, Court of Appeal opinion, and the magistrate --  you know, they would be up in arms, and they would have done something about it to show that this is an aberration.  But the total silence suggests this is sort of the way it's done.  And they got caught this time, but they're going to keep doing it because they have state judges who are willing to look the other way.  It's not a reassuring picture.

Judge Kozinski was fed up.

Judge Kozinski: Let me put it in somewhat different terms. You work for the [California] Attorney General, right?

Q: And the Attorney General may prosecute, has the authority to do that.

A: Correct, Your Honor.

Q: Now is the Attorney General aware of the situation?

A: The Attorney General is not. My supervisor is.

A: I have provided no report to the Attorney general.

Q: You will provide this information to her in the next 48 hours.

Then, after a shellacking by Judge Fletcher regarding the AG's office's conduct:


Judge Kozinski: Looks sort of bad. And it will look terrible in an opinion when we write it up and name names.  Will your name be on there? . . . Talk to the Attorney General, okay? Get her attention. Talk to the Attorney General and make sure she understands the gravity of the situation and that we take it very seriously. . . . Because I don't think an opinion is something that's going to be very pretty.

Essentially, Judge Kozinski advised the California AG's office that it probably doesn't want to contest this appeal unless it wants to get very, very embarrassed in a published Ninth Circuit opinion. That's the sort of attention that AG Kamala Harris doesn't want as she launches her U.S. Senate campaign to fill retiring senator Barbara Boxer's old seat.

Unsurprisingly, the AG's office saw the writing on the wall and decided not to contest the appeal. The Ninth Circuit issued this short order about three weeks after oral argument. 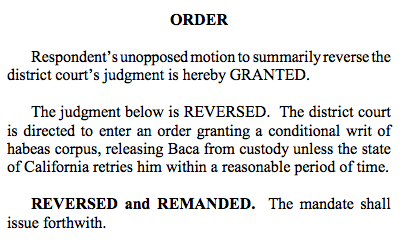 The interesting wrinkle: how did everyone happen to hear about this case? Prominent legal news outlets such as Above The Law and District Judge Richard Kopf's blog covered it. But they probably don't watch every Ninth Circuit argument hoping to find something newsworthy.

The story appears to have been broken by Sidney Powell, who wrote a post for the New York Observer that went viral in attorney circles. In May 2014, Powell wrote a book called Licensed to Lie about corruption in the Department of Justice. The foreword was written by Judge Kozinski.

Could Judge Kozinski (or perhaps one of his clerks) have tipped Powell off? It's possible, and somebody raised that theory in the comments on Judge Kopf's blog. But that doesn't matter as much to me as the bigger lesson: a federal appellate court has declared, loudly and clearly, that it's fed up with prosecutorial misconduct and will take steps to combat it when it sees complacency in the state courts.
Posted by The Pointiff at 1:30 PM