After the Hyatt Herald Square didn't have my reservation, I took a cab to the Andaz Wall Street in Lower Manhattan. Despite the hotel's name and address (75 Wall Street), the entrance is on Water Street. 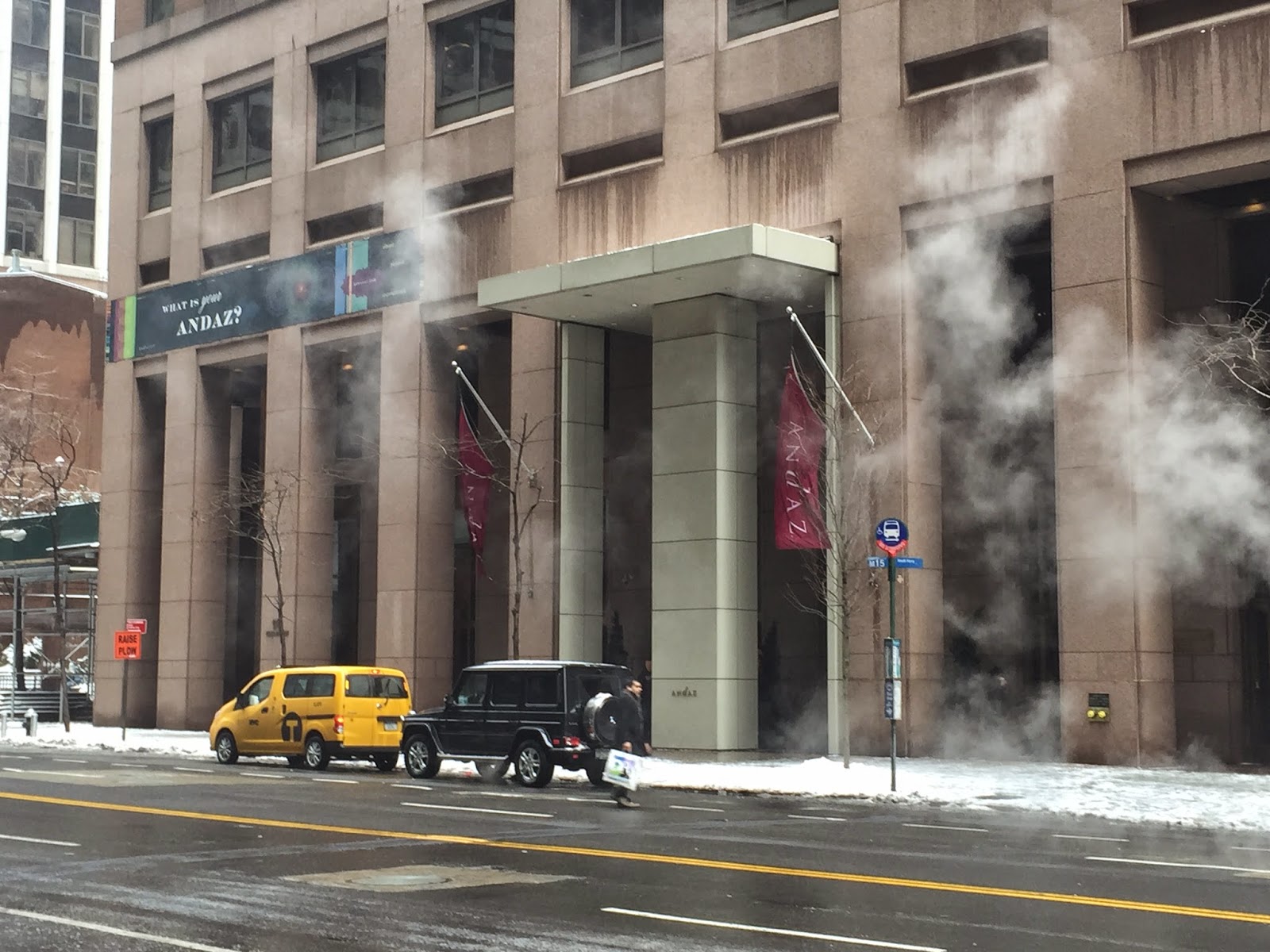 Introduction
Andaz is Hyatt's line of "luxury boutique hotels" - a step down from the Park Hyatt line, but not a big step down. There are 12 Andaz hotels worldwide in high-end destinations such as Napa Valley, Maui, and the ritzy Xintiandi neighborhood in Shanghai.

On weekends, there's not much happening in the Financial District - accordingly, room rates at the Andaz Wall Street are much lower than on weekdays.

The Andaz Wall Street is a relatively new property; it opened on January 18, 2010. The hotel has 253 rooms, slightly larger than Hyatt's two other top-end properties in New York: the flagship Park Hyatt New York (210 rooms) and the Andaz Fifth Avenue (184 rooms).

Hyatt classifies the Andaz Wall Street as a Category 6 (on a scale of 1 to 7) property. That's rarefied company; only eight hotels are classified higher. But take that classification with a grain of salt - Hyatt lumped all of its full-service New York properties into Category 6 (except the Category 7 Park Hyatt).


Lobby
Check-in takes place at an island in the middle of the lobby. There are a few nice seating areas scattered around the rest of the lobby, but it's not a big space. 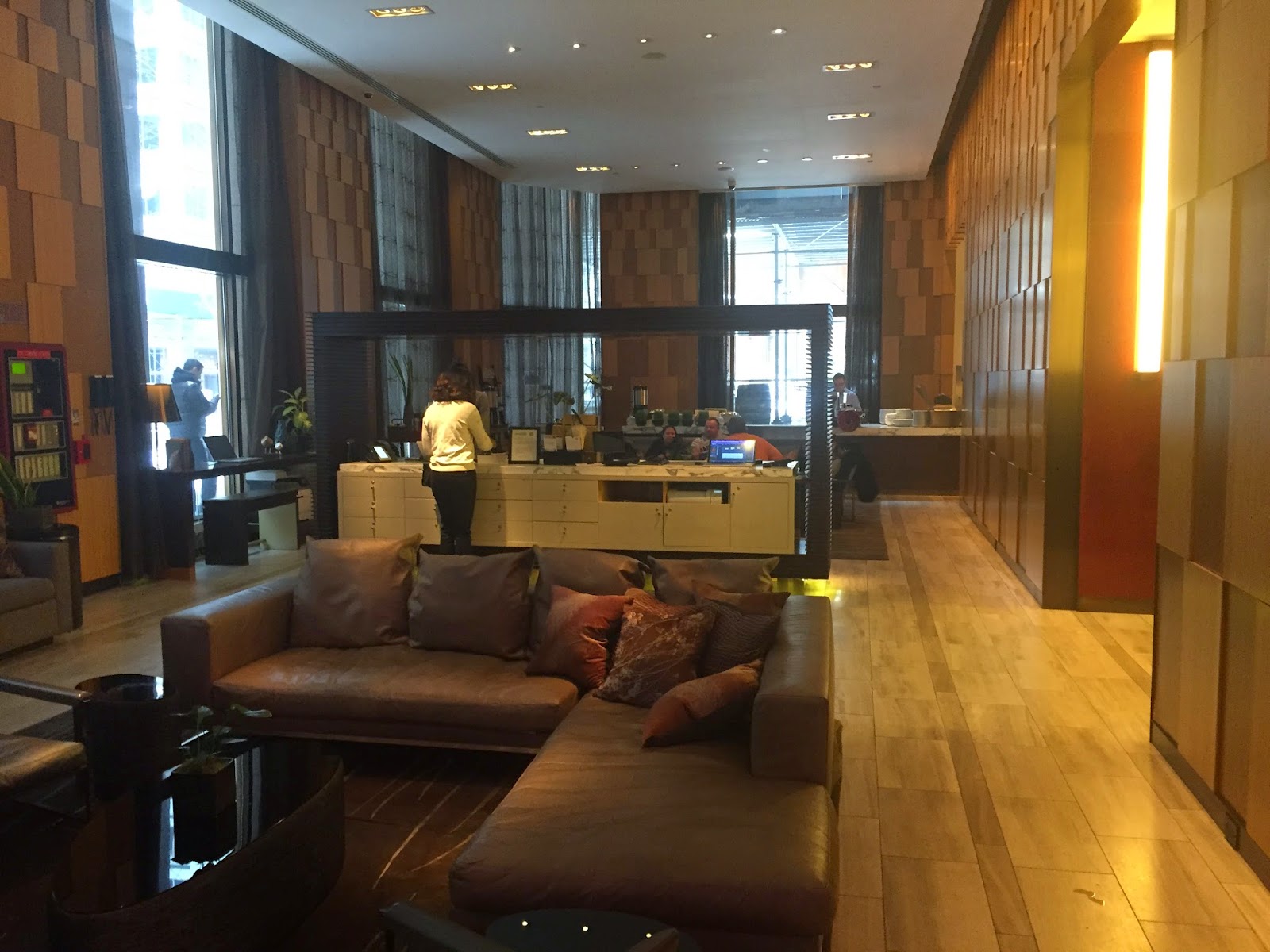 In the back of the lobby, there's an open-air kitchen area. It looks like a great area to serve a breakfast buffet, but I think it's used solely as a food prep area. That seems weird to me. 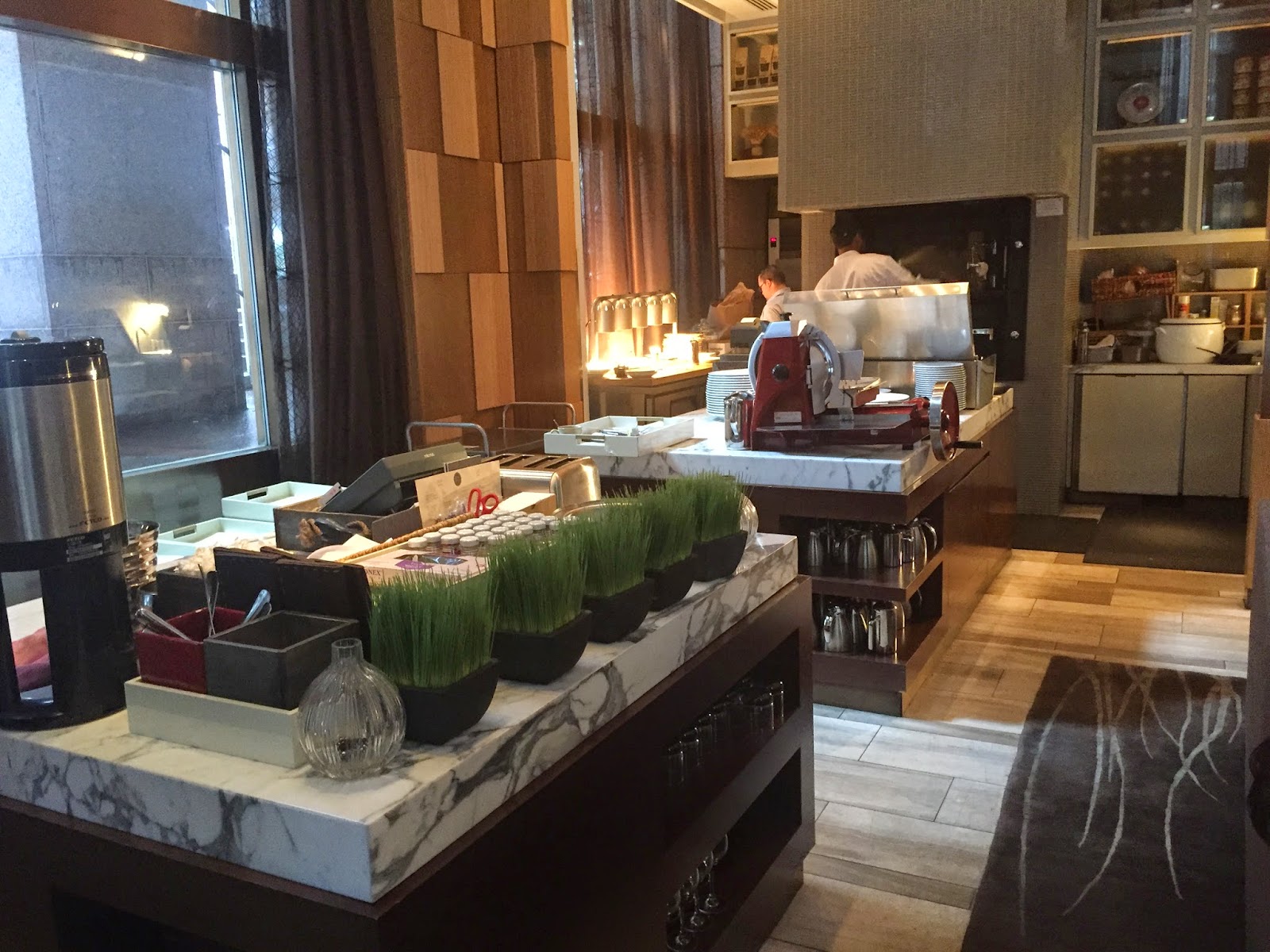 Breakfast (free for Diamond members in Hyatt's loyalty program) is served at a restaurant called Dina Rata on the second floor. Unfortunately, I didn't try the breakfast during my stay. 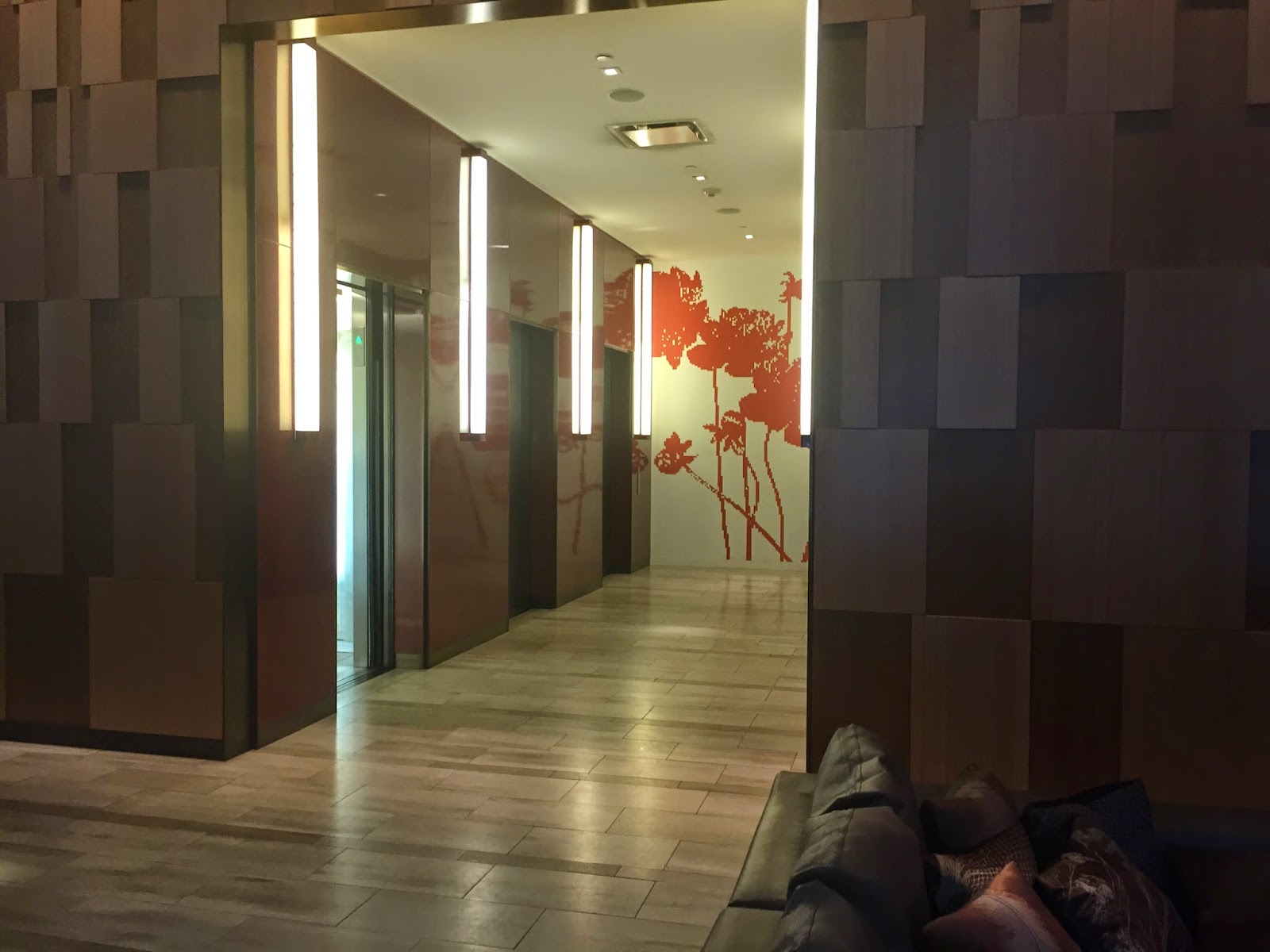 Guest Room
I booked a standard room but was upgraded to an Andaz Large King room because of of my Diamond status with Hyatt.

The room was larger than I expected a Manhattan hotel room to be. The room decor was sparse, but that probably made the room seem more expansive. 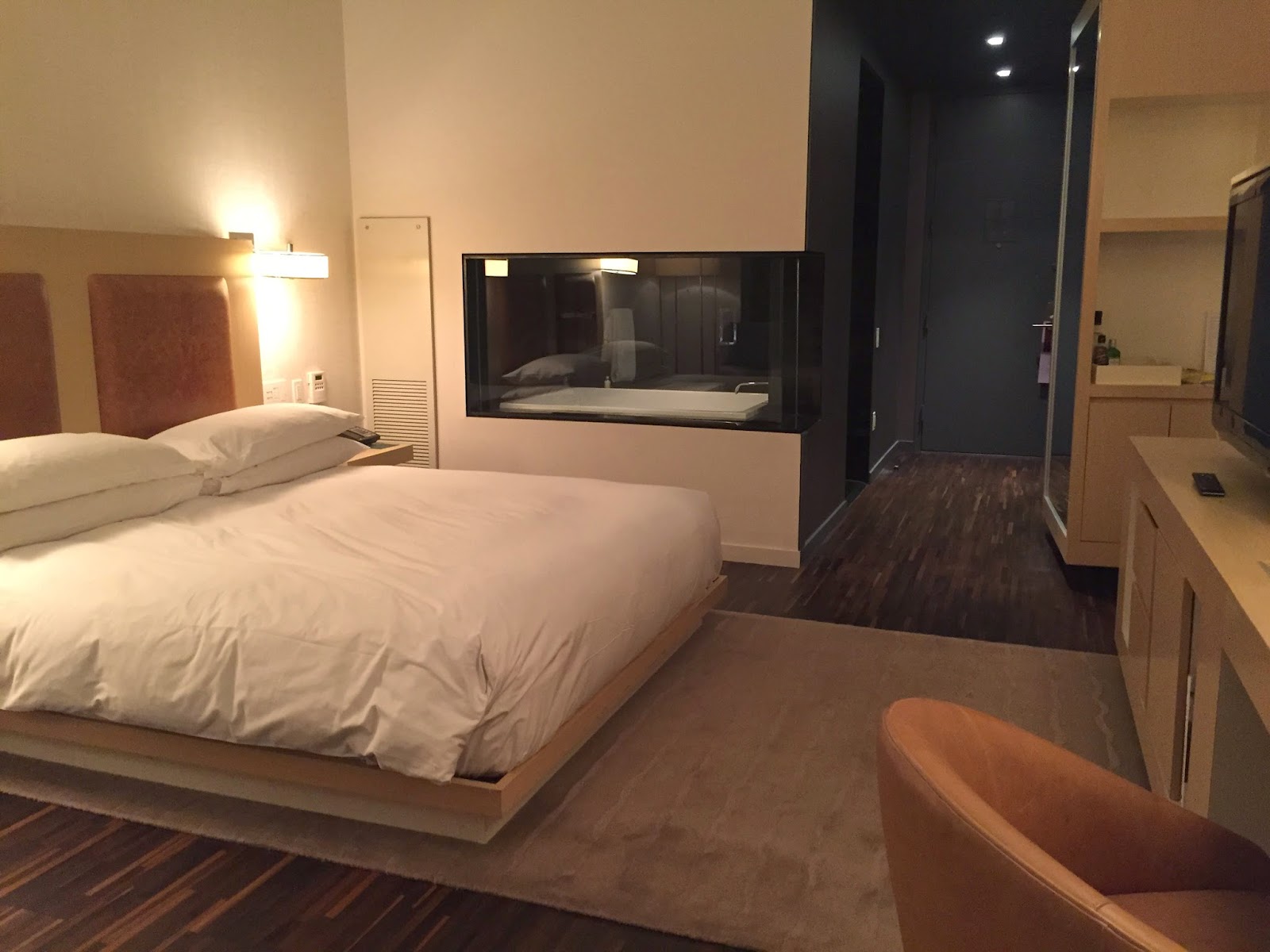 There is a large glass partition separating the bathtub from the bedroom (center above; right below). Most hotels that have one of these risqué windows (e.g. the Cosmopolitan Las Vegas) have some sort of a modesty curtain that can be drawn; this room did not. 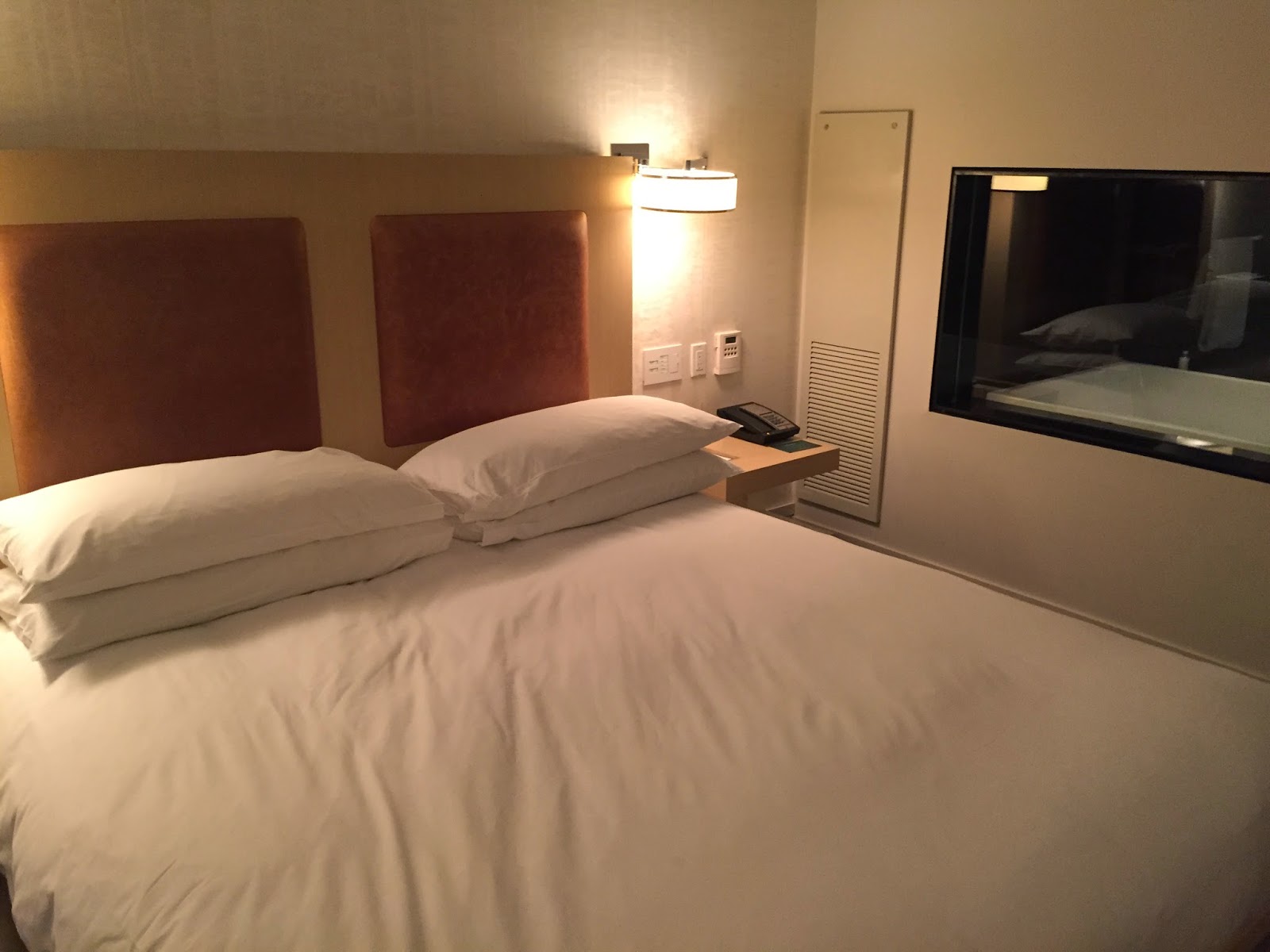 Through the window, you can see a magnificent bathtub, one of the largest I've seen in a hotel. Every night, housekeeping left a bottle of orange-and-vanilla scented bath salts next to the tub - it made the room smell like a Creamsicle. 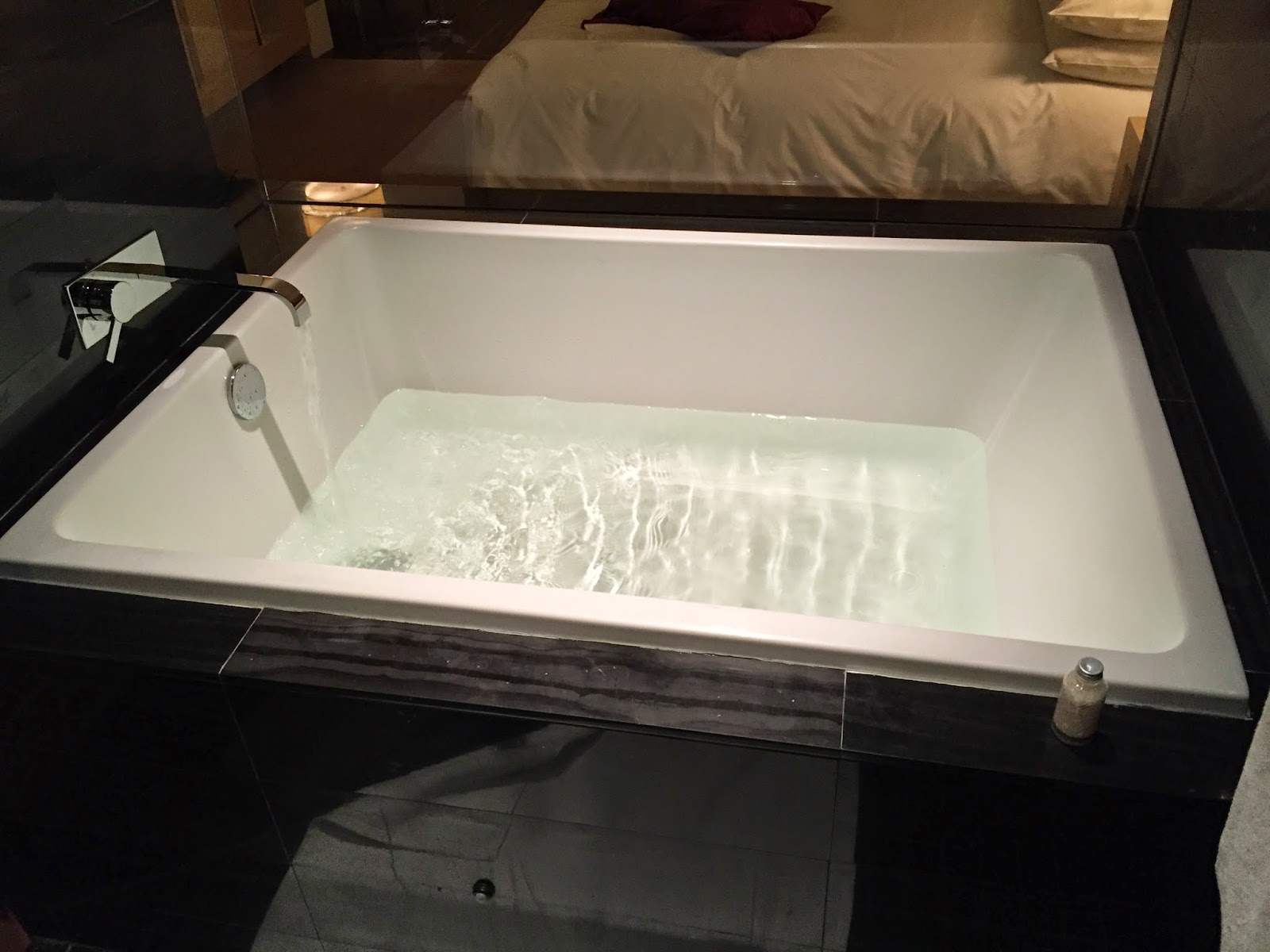 The bathtub-shower area is separate from the toilet and sink areas. 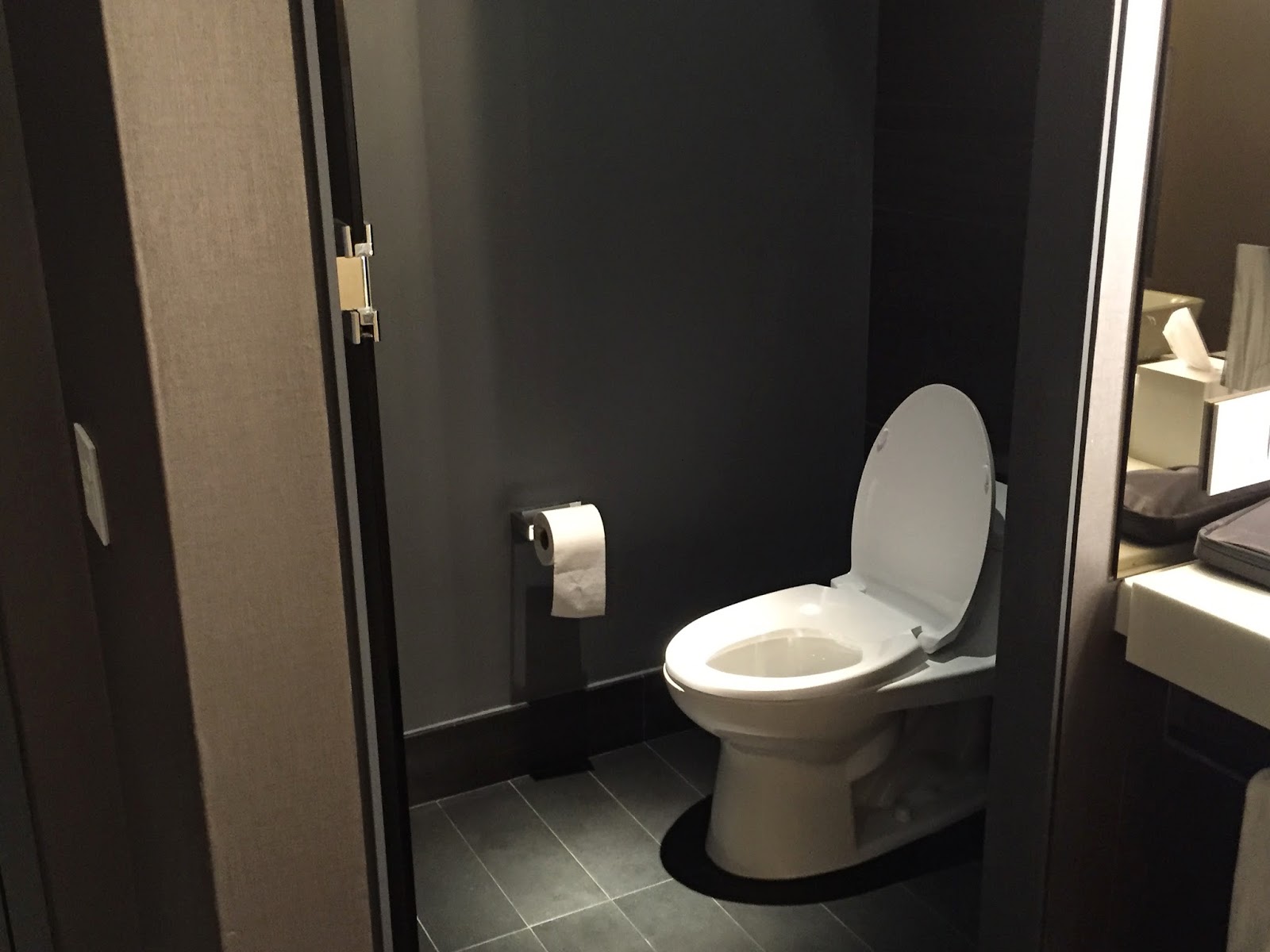 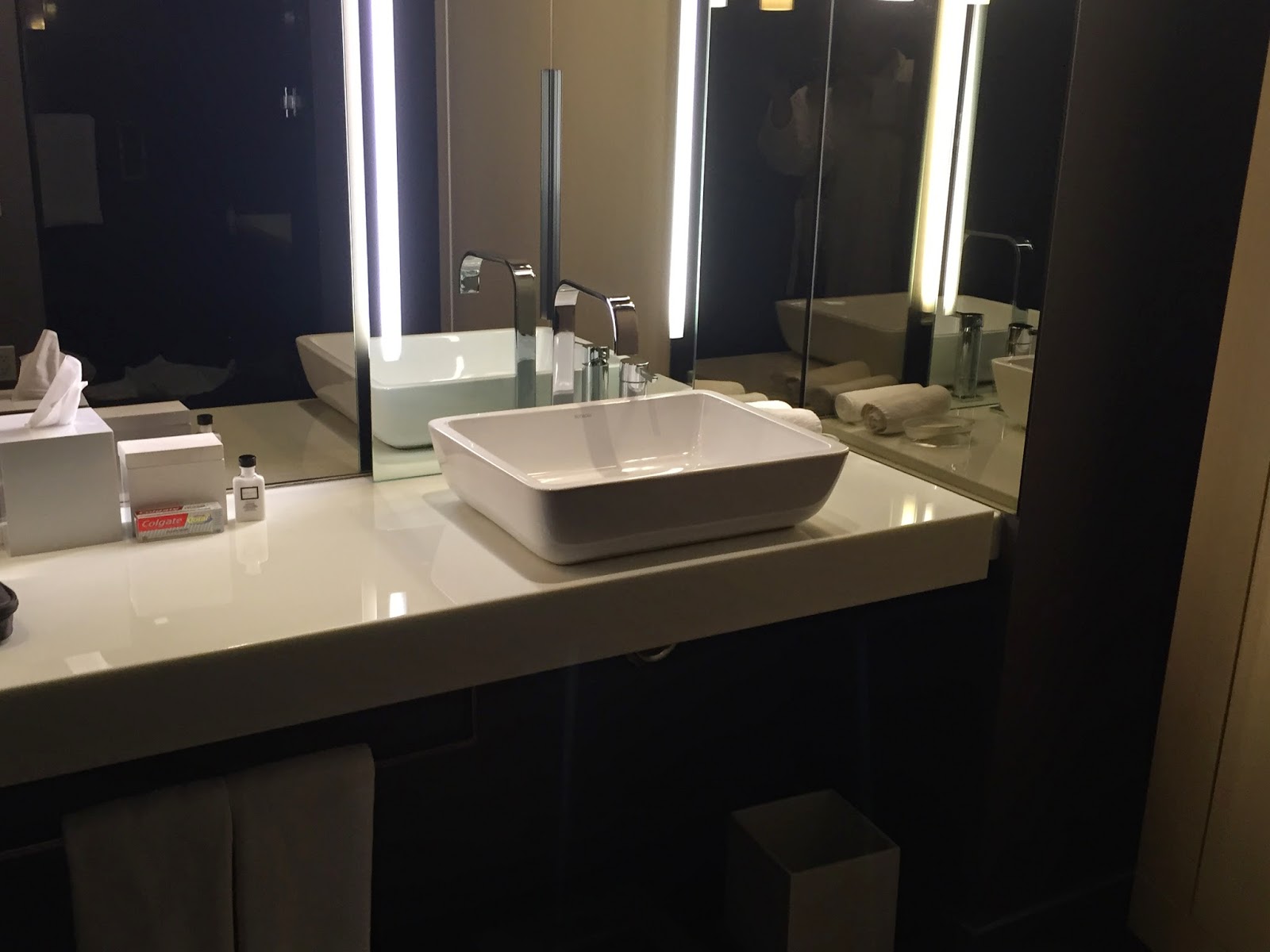 Between the bathroom and the bedroom / living room, there is a giant rotating closet. One side of the storage unit has a giant mirror; one side has closet doors; one side has two hooks for bathrobes; and the fourth side has some snacks (complimentary at Andaz properties). It's not a big snack selection, but I appreciate the gesture. Unfortunately, the alcohol is not complimentary. 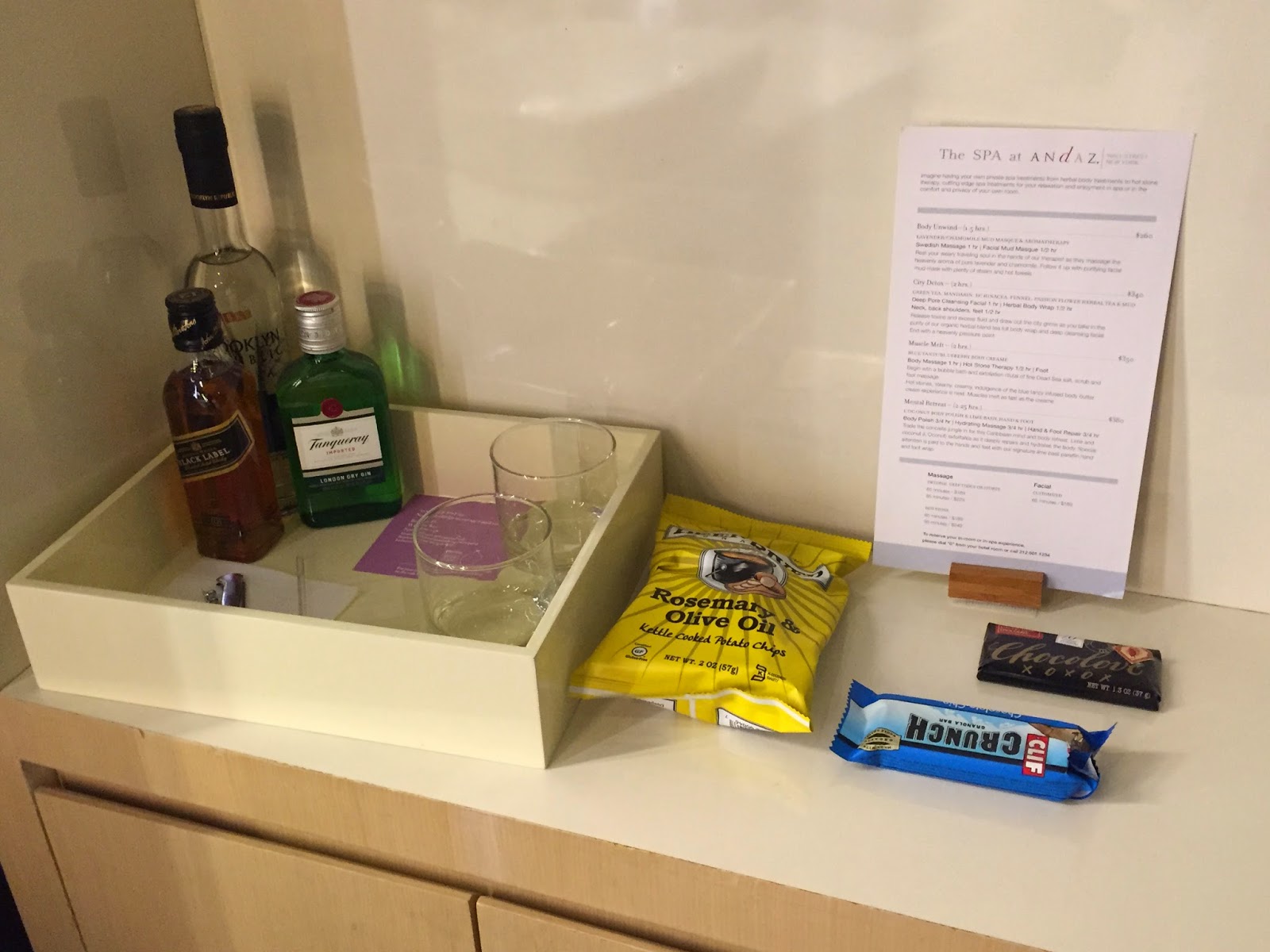 The desk area has a Scandinavian, IKEA-y aesthetic. (In the picture below, you can see the rotating storage unit on the left). 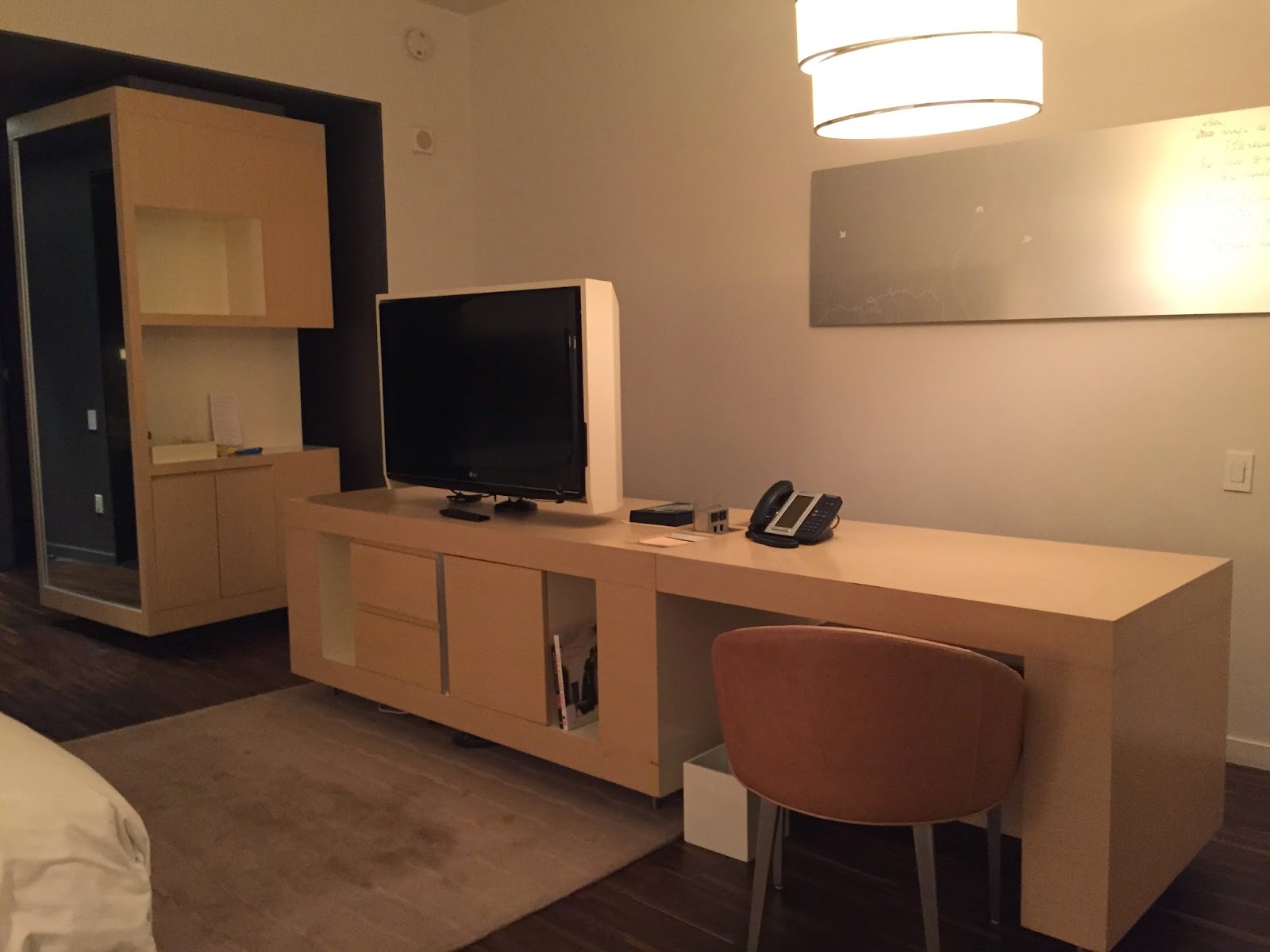 The back of the desk has a couple of hidden seats. There's enough room to sit on either side of the desk; theoretically, important investment bankers could hash out a term sheet while sitting across from each other (or play backgammon or something). 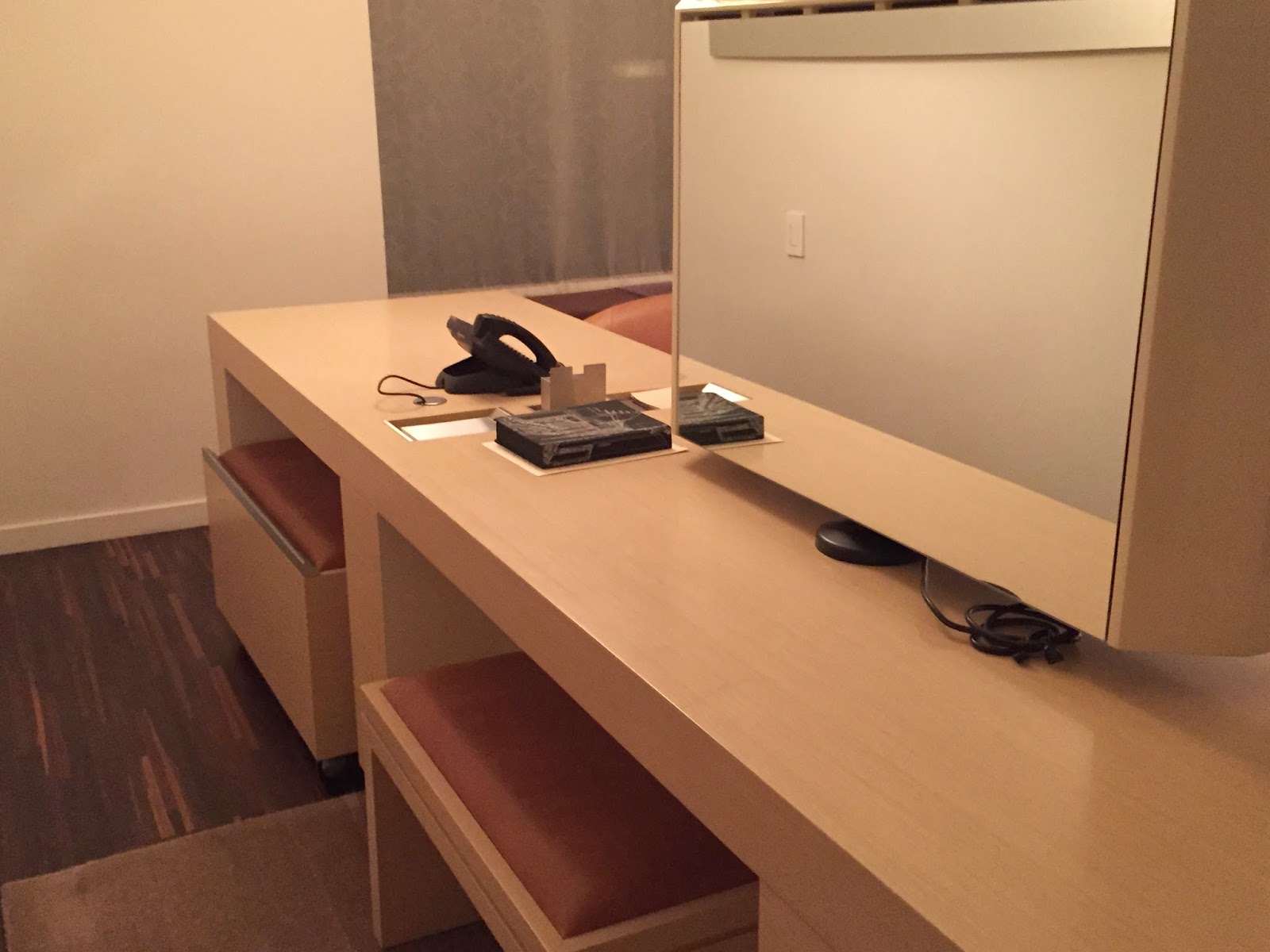 Back of the desk

The left-hand side of the desk has a built-in mini-fridge. Non-alcoholic beverages are free - this is a fantastic feature of the Andaz hotels. 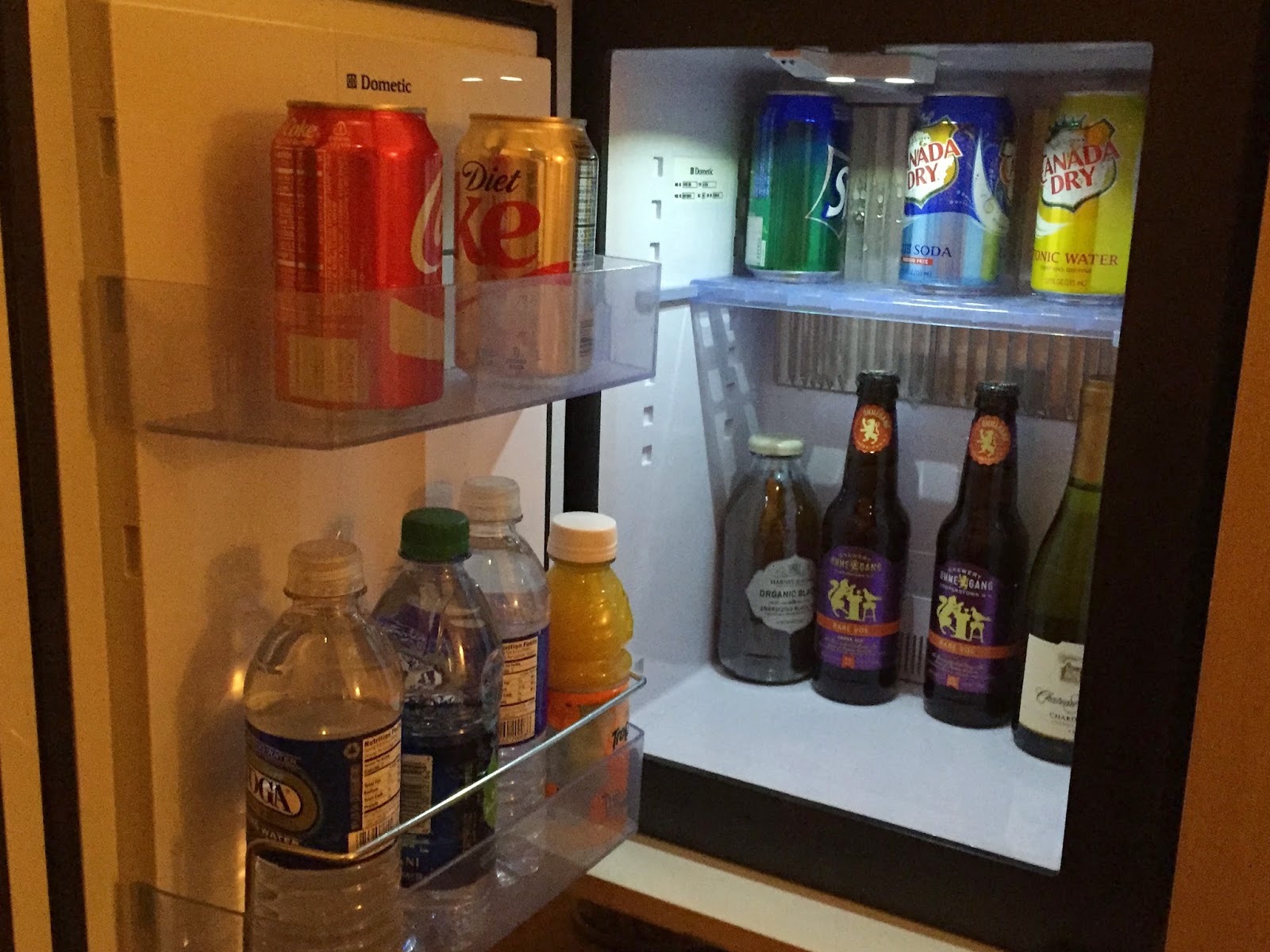 The only piece of wall art was this brushed-aluminum plate behind the desk with a portion of Thomas Hardy's manuscript in an obscure poem called The Forsaking of the Nest: 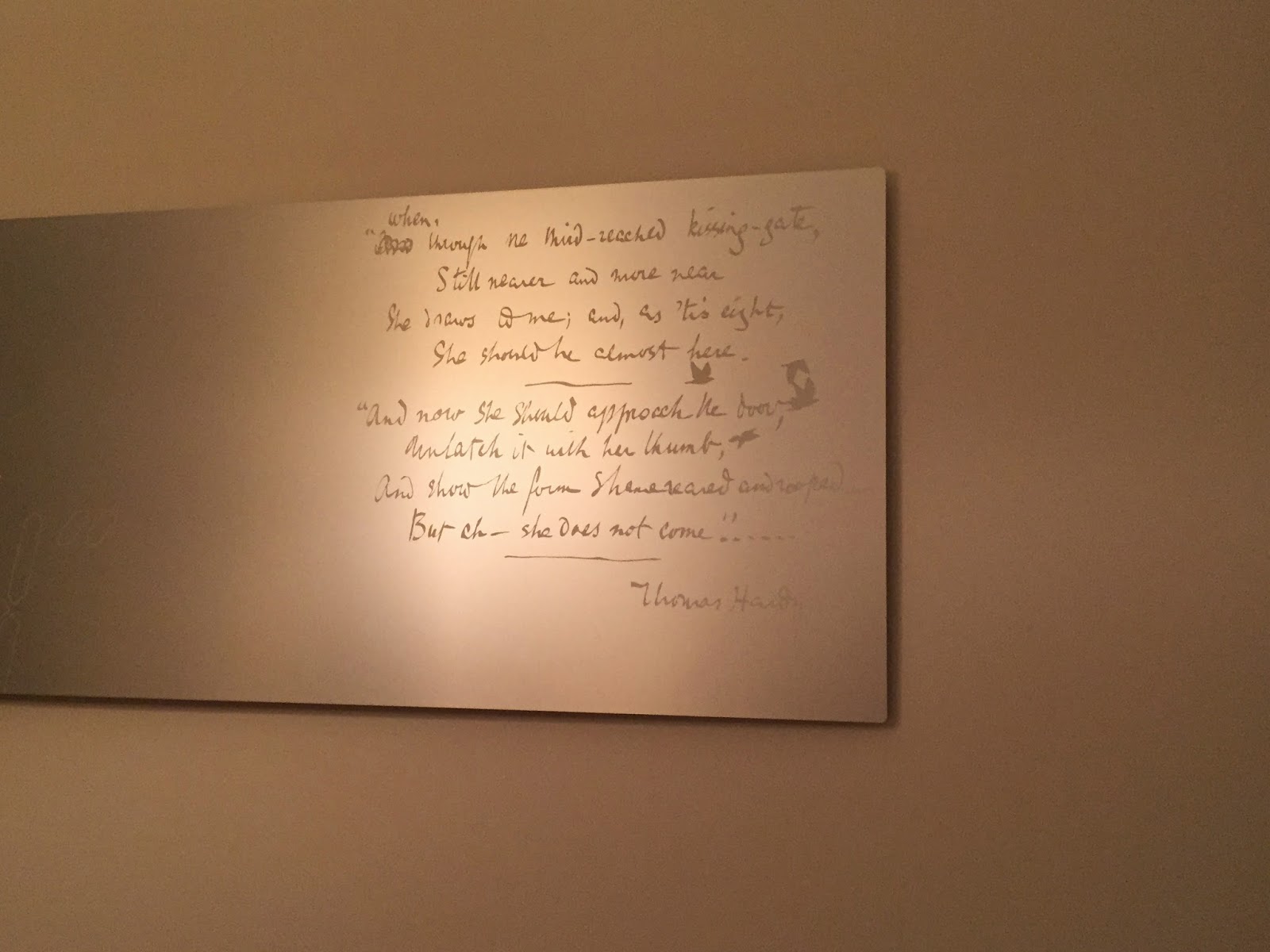 Conclusion
The room is large by any standards, Manhattan or otherwise. The hotel did a great job with the room - it feels modern but tasteful.

I had very few interactions with hotel staff - there's no doorman; the check-in agent doesn't greet guests as they enter - so my experience felt impersonal. But I suspect that most people who stay at a Wall Street business hotel are self-sufficient and don't need (or value) coddling. On balance, I thought this was a great property at a very reasonable price point for the weekend. I'd stay here again.
Posted by The Pointiff at 2:27 PM