United retired the 747-400 from service in November 2017, one of the last aircraft offering international first class, leaving just some 767-300 and 777-200 with the Polaris First product. 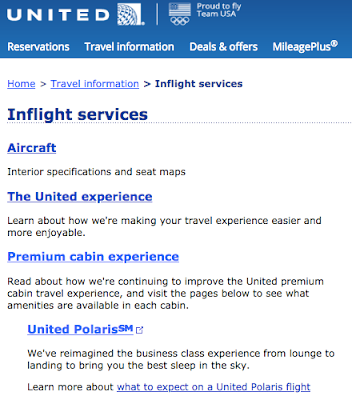 United's most recent aircraft acquisitions for international flights, the 787-9 Dreamliner and the 777-300ER, both have Polaris Business as their highest class of service.

The new Polaris Business is a much-needed move; the old 2-4-2 configuration was one of the worst long-haul international business-class products on the market, with half the seats lacking direct aisle access.  The other two U.S. legacy carriers, American and Delta, both offer 1-2-1 seating in long-haul business class.

Among United's international competitors, British Airways is one of the last airlines offering the 2-4-2 configuration in business class; the much-reviled Lufthansa 747-400 business class is in a more favorable 2-3-2 configuration (as do some Emirates aircraft); but most other major airlines (e.g., the Asian carriers; Swiss; Virgin Atlantic; Etihad) offer 1-2-1 seating on their international routes.

So before United's international first-class product dies completely, I wanted to give it a try on my trip to Japan.  I transferred some Chase Ultimate Rewards points to United's Mileage Plus program and booked:
Will ANA's first class be worth the 20,000 mile premium?  Stay tuned to find out!