United opened its Polaris lounge at O'Hare in December 2016 as part of its rebranding of United Business into United Polaris.  The opening was a smash success, with bloggers proclaiming it "easily the best US carrier-operated lounge in the world" and a "fantastic lounge, clearly a step or three above the United Clubs." 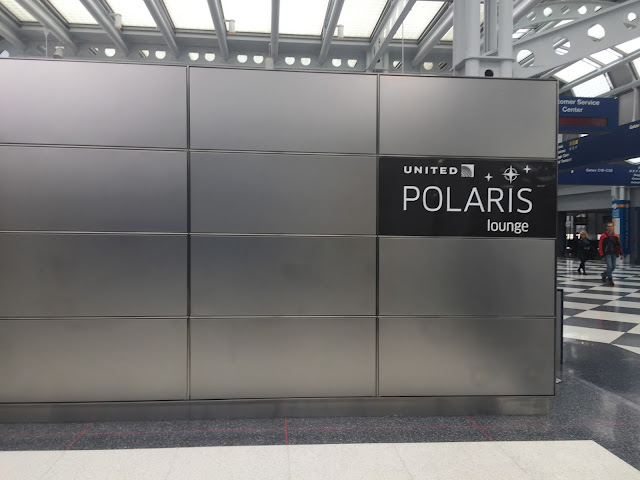 With that hype, I arrived at O'Hare a bit earlier than issue to get breakfast at the Polaris lounge.
All United mainline flights, both domestic and international, depart from Terminal 1 at O'Hare.  There was no dedicated check-in desk for Polaris First.  Instead, United lumped together a single check-in line for its Premier 1K fliers and all international premium-cabin passengers. 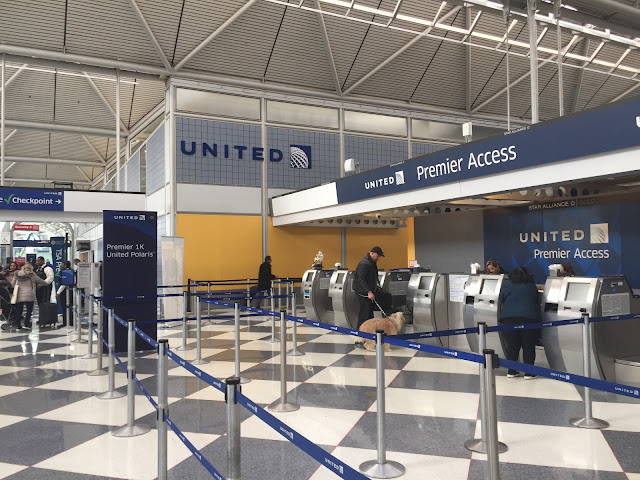 There was no line at 10:45am on a Tuesday (likely one of the quietest times at O'Hare).  But because many passengers have access to this check-in area, I wouldn't be surprised if lines are quite long during peak times.

To the left of the Polaris check-in area, there is an automatic door marked "United Global Reception" with no further signage explaining access.  Next to the door was a check-in agent/bouncer who told me that the door leads to a dedicated check-in area for United's top-level Global Services frequent fliers.  I asked whether Polaris First customers can use the check-in area; the agent said "no" and disappeared behind the door.

Back at the Premier Access check-in desk, an agent handed me my boarding pass, but said nothing about lounge access or priority security screening.  I went through the Pre-Check line, but noticed that Polaris First passengers without Pre-Check access would use the same security lane as United's lowest-tier elite status fliers.

The Polaris First check-in experience doesn't feel particularly "first class." In fact, it is identical to the United Polaris business-class check-in process. Given that O'Hare is a major international hub for United, the lack of differentiation for Polaris First passengers is disappointing.

Post-security, I saw no signs for the Polaris lounge, another miss on United's part.  After some Googling, I discovered that the lounge is in the C Gates, connected to the rest of United's terminal by a retro underground corridor. 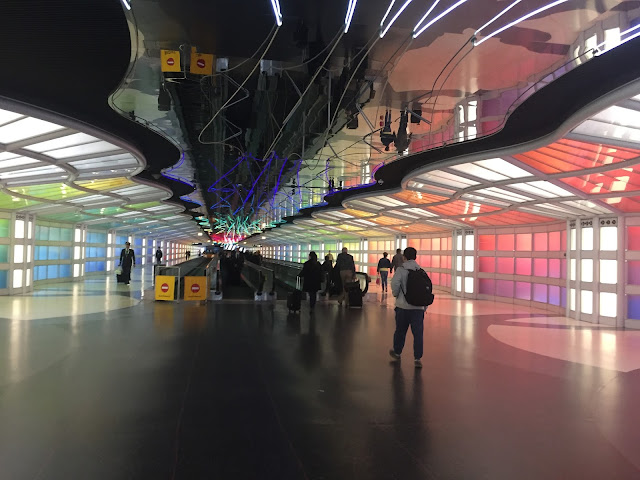 Underground corridor between B and C Gates

The Polaris lounge is near Gate C18, near where United's Global First lounge used to be. 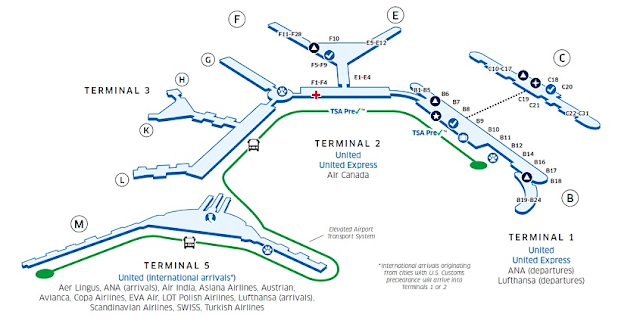 Outside the Polaris lounge, an attendant inspected my boarding pass and allowed me to proceed.  Access is limited to premium-cabin passengers on transcontinental flights; Star Alliance Gold fliers traveling in economy get sent to the United Club.  United's full lounge-access rules are here. 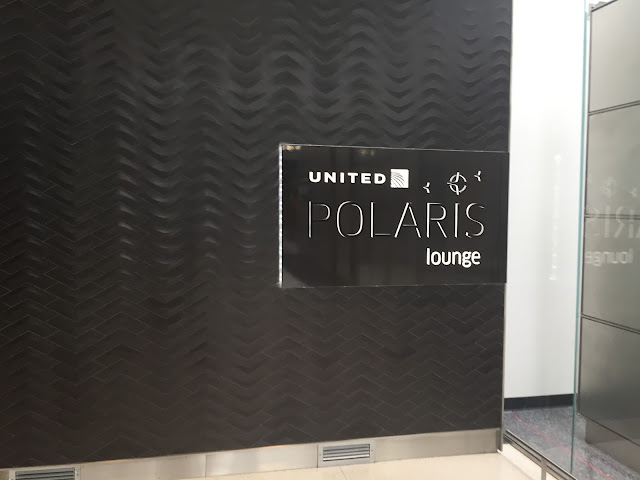 Once inside, a check-in agent asked to see my boarding pass.  I don't know why the lounge requires two level of bouncers. 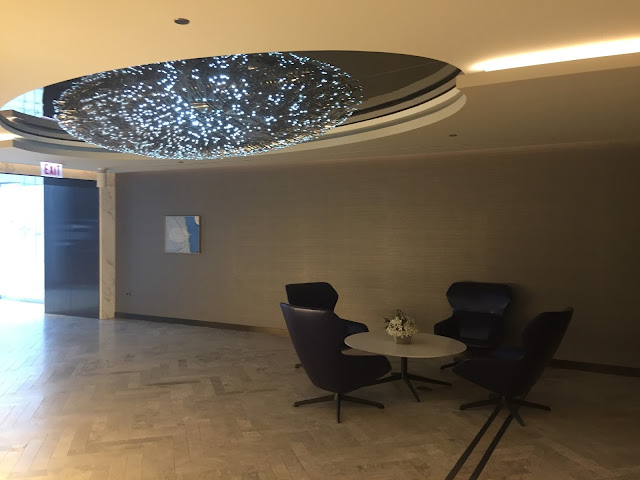 The lounge is beautiful and spacious.  Quite a few of the seats were solo cubicles reminiscent of a business-class seat: 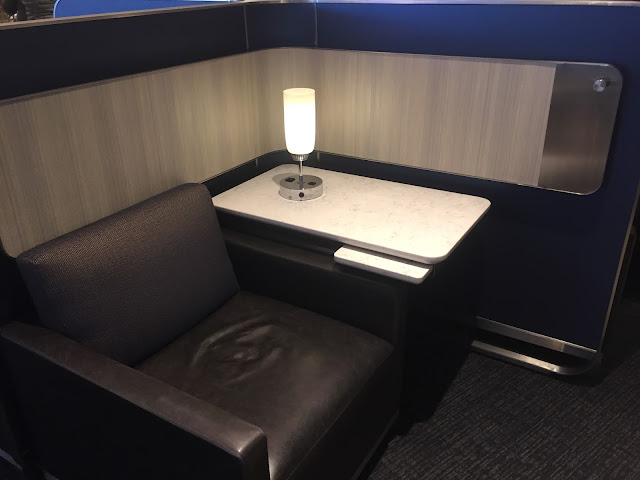 The cubicle has a tray table that pulls out and electric sockets, making it a great place for a business traveler to have a snack and get work done before a flight.

There was also cafeteria-style seating near the buffet area and leather stools at the bar area. 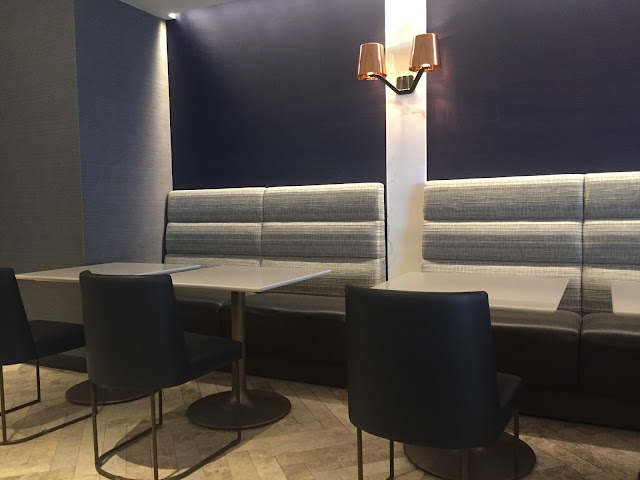 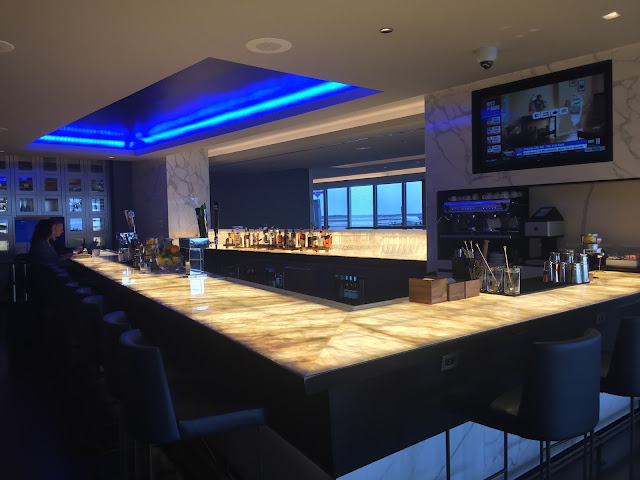 I arrived at the lounge at 11am and overheard the buffet attendants mention that the breakfast-lunch transition happens at 11:15.  For breakfast, there was a selection of hot items in individual-sized skillets (which reminded me of the Wicked Spoon buffet at Cosmopolitan Las Vegas). 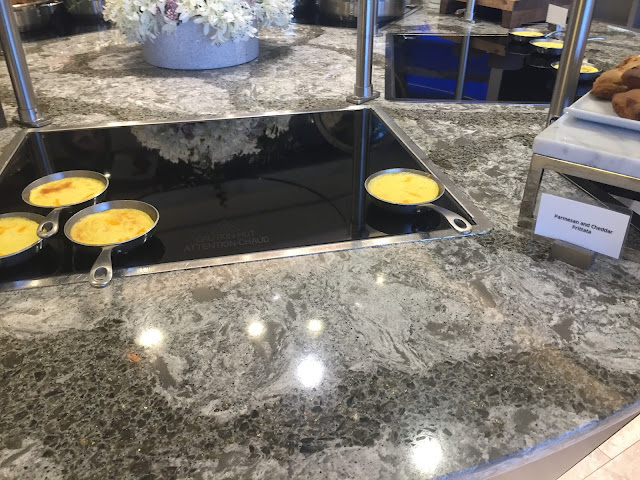 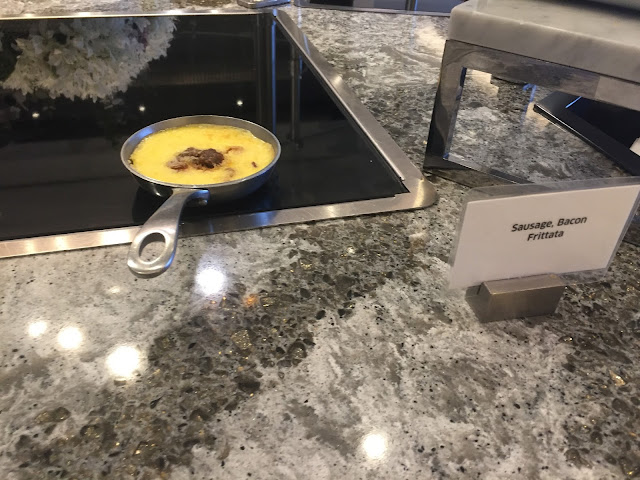 There were also some continental-breakfast pastries. 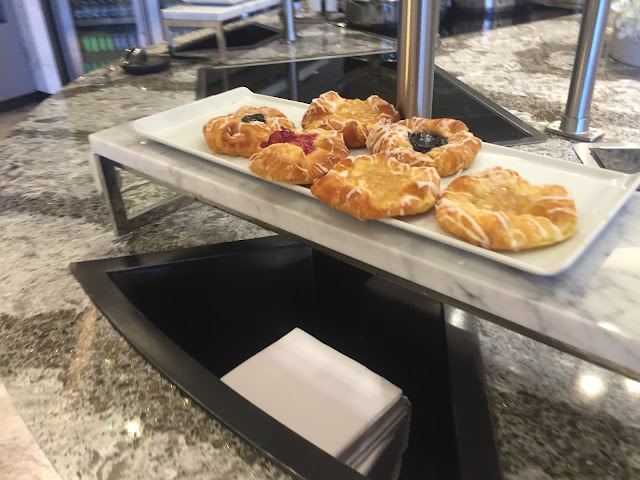 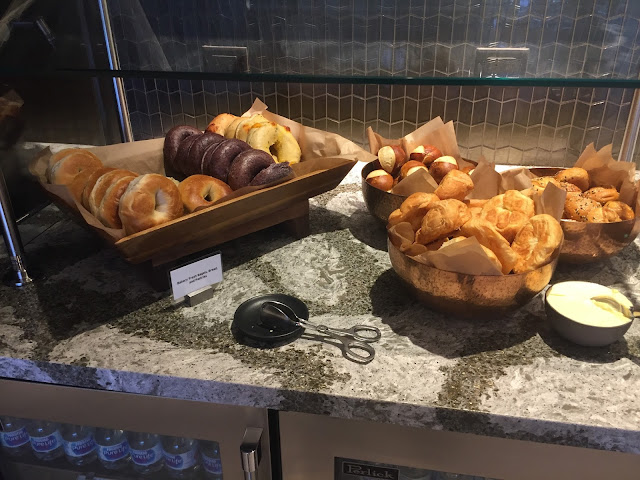 Next to the pastries was a chilled-food area of the buffet with smoked fish and fresh fruit. 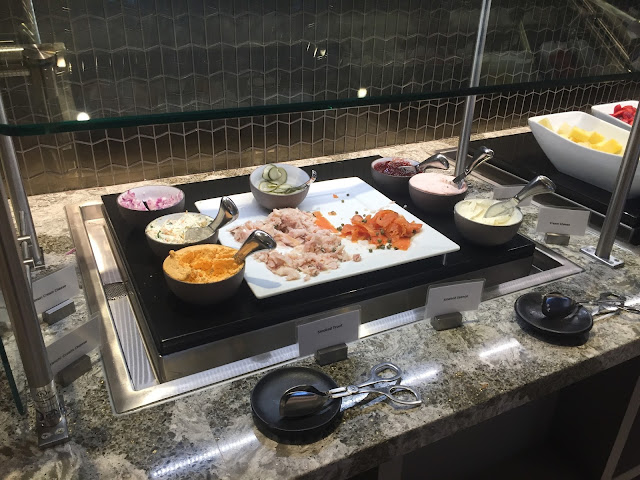 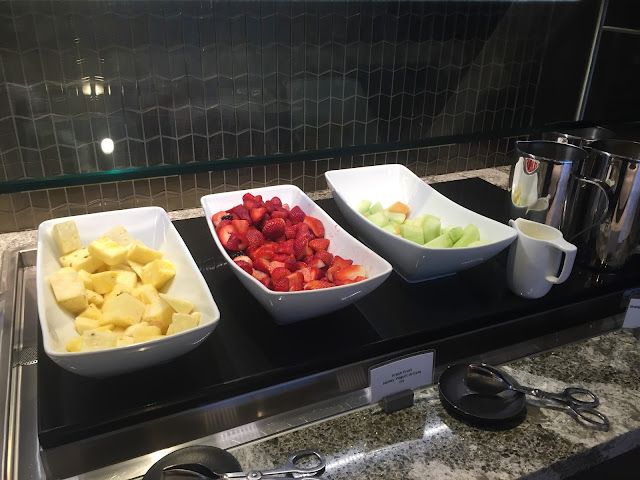 At 11:15, the staff removed the breakfast items and replaced them with lunch selections. 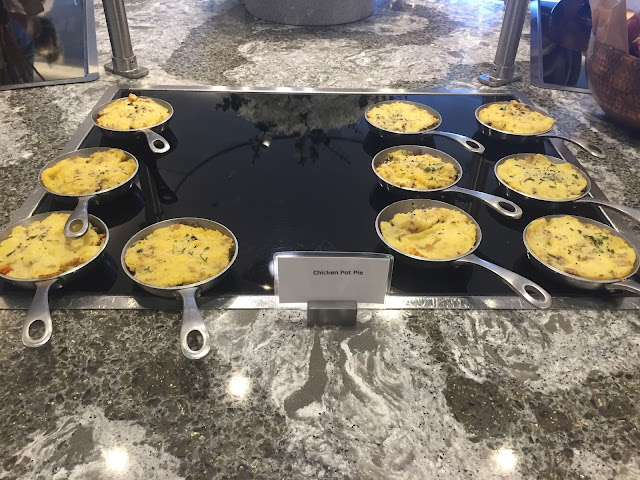 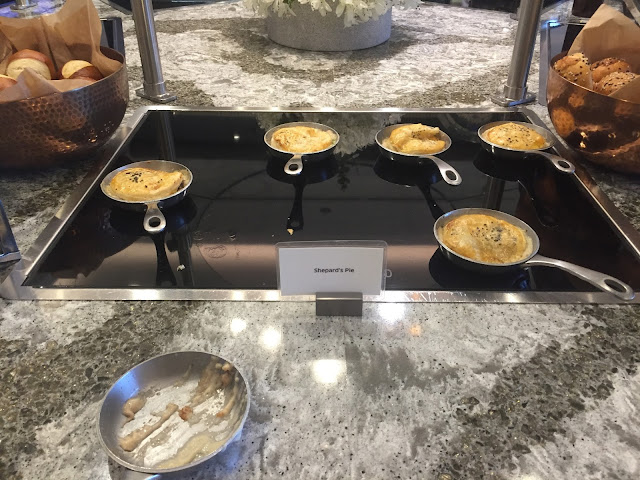 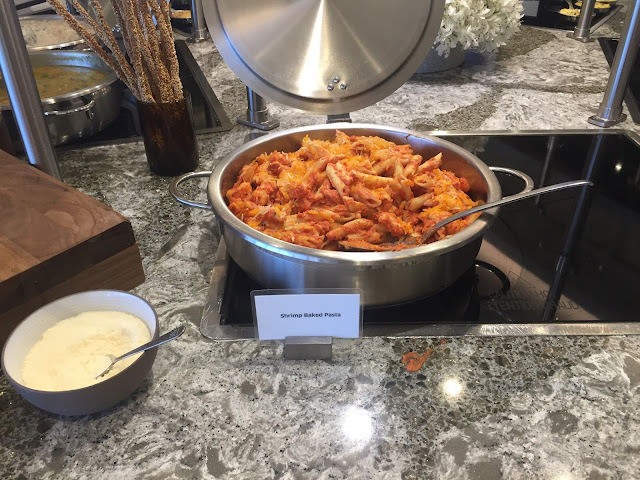 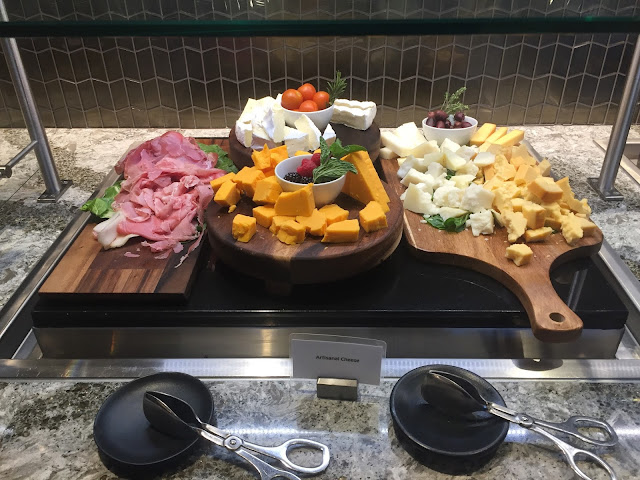 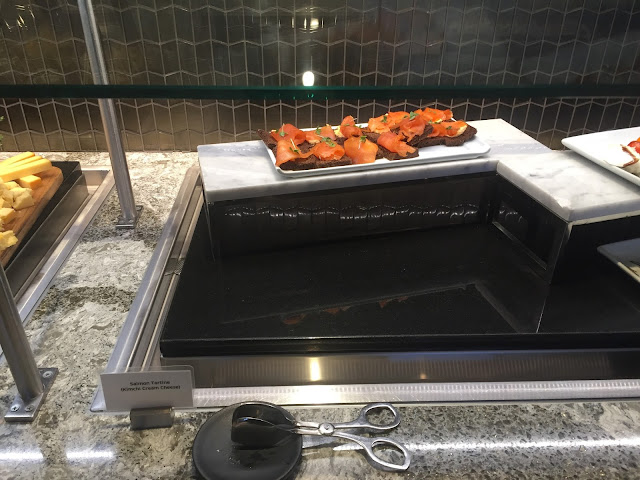 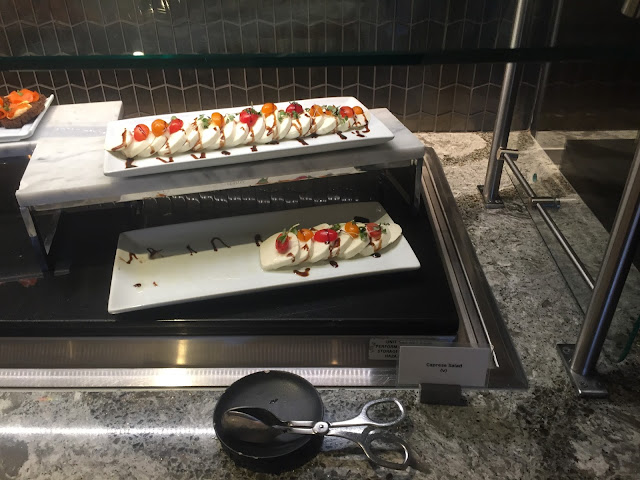 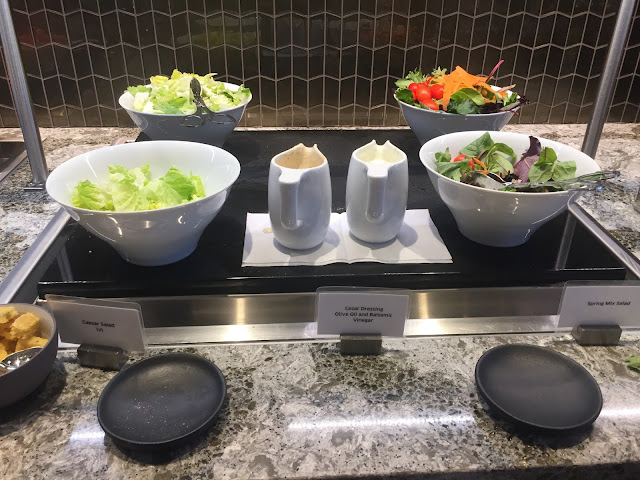 The lounge also offers a dine-on-demand area with restaurant-style seating and printed menus.  That area is in the far back of the lounge (with no signs; I wouldn't have known about it had I not read about it online). 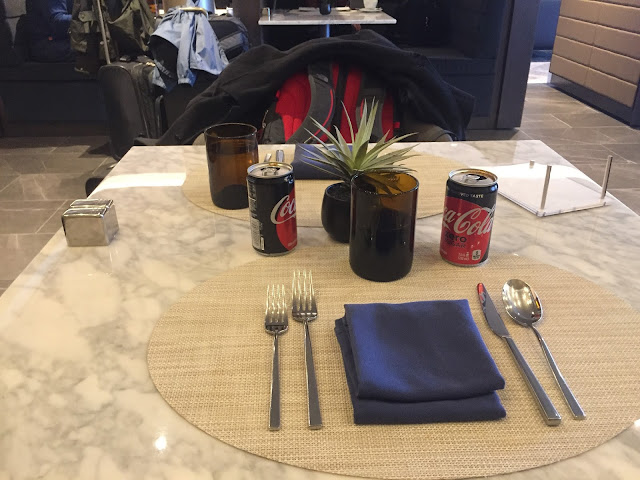 The breakfast options sounded quite good. 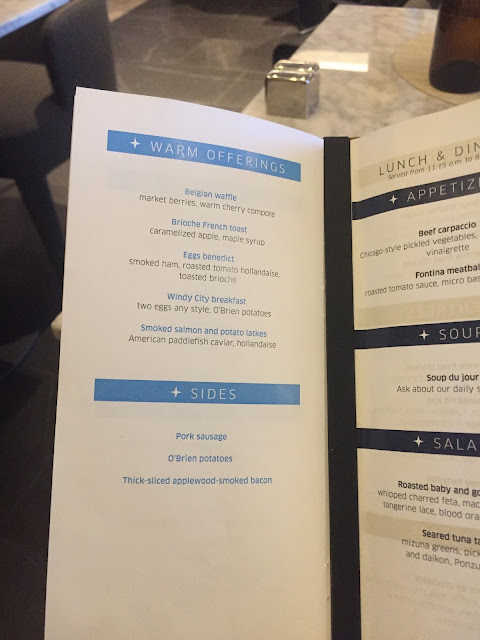 Before I could take a picture of the lunch/dinner selections, someone at the table next to me asked if they could see my menu.  (There don't seem to be enough printed menus.)  I only had a couple minutes left before boarding, so ordered a meatball appetizer. 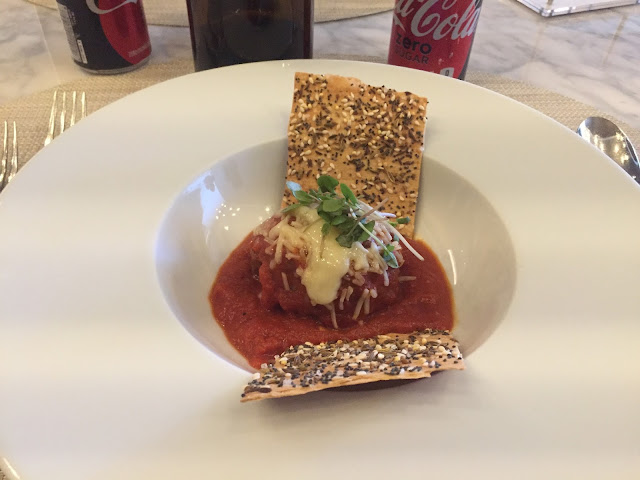 For business-class passengers, this lounge is a huge win. It's much nicer than the United Club (home of carrot sticks and cubed cheddar cheese), which was the previous premium-cabin lounge offering.  Dine-on-demand is quite rare among business-class lounges (American recently began offering it to their international first-class passengers.)  Polaris First customers can no longer use the United Global First lounge (to which access was more exclusive), but the remodel and enhanced food offerings are a net positive.

But the rollout of the Polaris lounges probably hasn't gone the way United hoped.  The initial press release announcing the O'Hare lounge promised that lounges in eight other locations – Los Angeles, San Francisco, Houston, New York/Newark, Washington Dulles, Tokyo Narita, Hong Kong and London Heathrow – will follow."  Yet, sixteen months later, none of the other Polaris lounges has opened.

Meanwhile, in 2017, American opened overhauled Flagship Lounges for premium-cabin passengers at its O'Hare, JFK, Miami, and LAX hubs, with Heathrow and DFW scheduled for completion this year.  And all of those lounges have dedicated areas (and enhanced dining options) for first class passengers.